Accessibility links
Why Google Is Going All In On Diabetes : Shots - Health News Google made a name for itself with search technology, but it has dabbled in moonshot projects like self-driving cars. Now the company's life science unit is looking for better diabetes treatments. 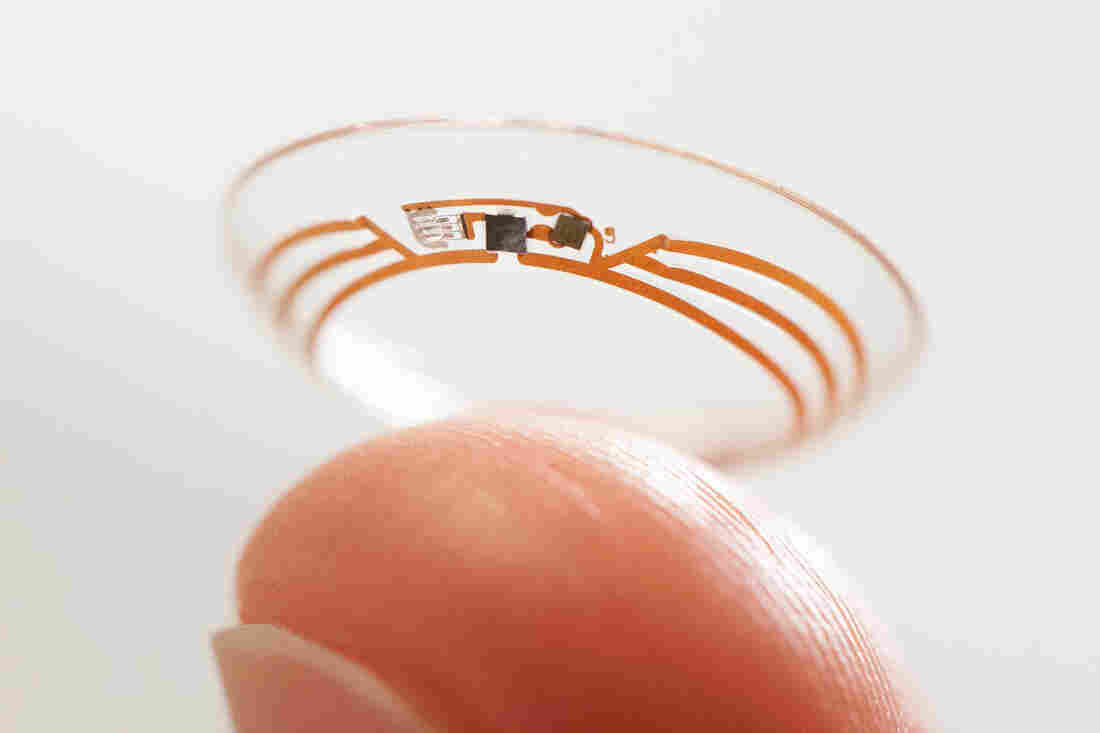 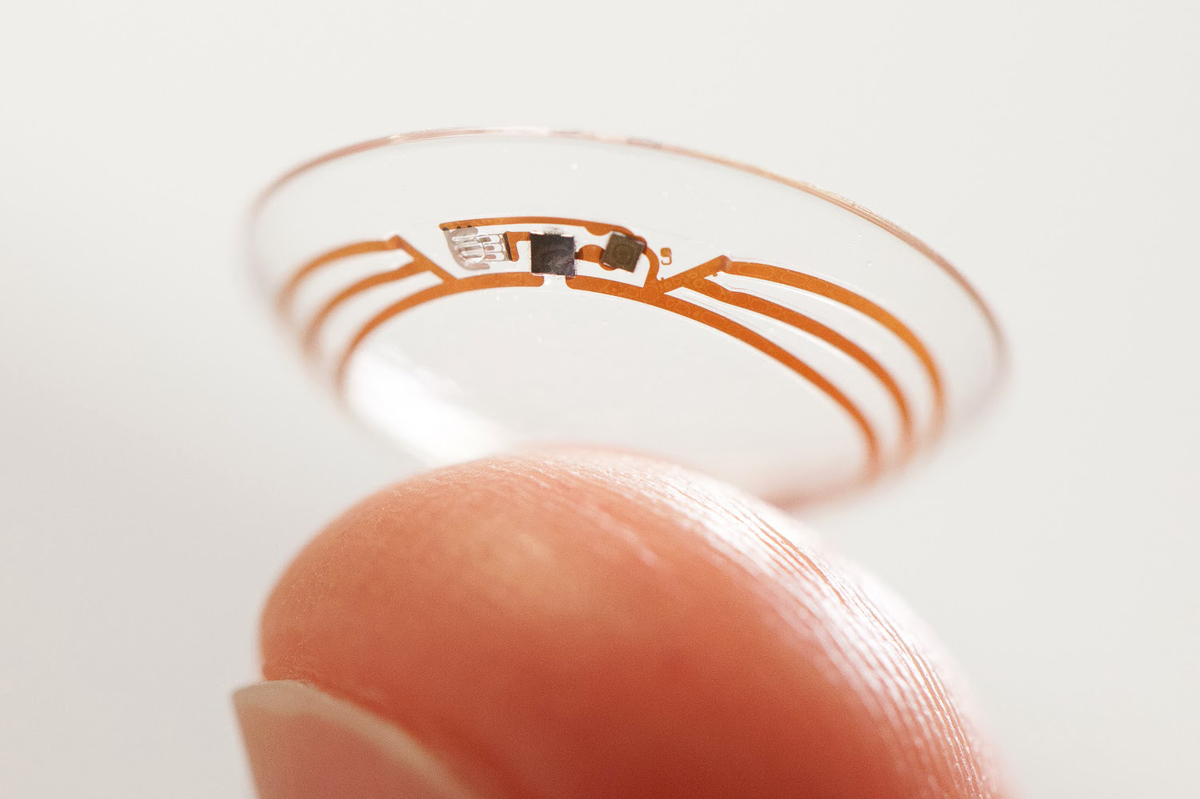 An experimental contact lens being developed by Google can painlessly measure glucose levels in tears.

Millions of people with diabetes prick a finger more than five times a day to monitor their blood glucose levels. It's a painful and expensive process.

But now, Google's Life Sciences division is putting its immense resources behind new initiatives aimed at helping them better live with the disease.

"It's really hard for people to manage their blood sugar," said Jacquelyn Miller, a Google Life Sciences spokeswoman, in an interview with KQED. "We're hoping to take some of the guesswork out of it."

Earlier this week the new Google Life Sciences unit announced that diabetes is the company's first major disease target. It may come as a surprise that Google, a company that helps people search online for flights and restaurants and dabbles in other ventures like self-driving cars, is investing in new therapies to treat disease.

But according to Michael Chae, executive director of the San Francisco Bay Area Chapter at the American Diabetes Association, Google's decision is a no-brainer. It's a highly lucrative opportunity. In 2012, the total cost of managing diabetes was put at $245 billion in the U.S. alone. The timing also appears just right for technology companies to enter the field.

"There's been an explosion of wearables, data and analytics," Chae said. "People with diabetes are more comfortable living in a measured world."

He envisions a future where people with diabetes can measure their blood glucose levels on a continuous basis, using painless methods. One of Google's emerging products is a contact lens embedded with a glitter-sized sensor that can measure glucose levels in tears. "There's a whole lot of innovation at once," he said.

The methods that Cyrus Khambatta uses to manage his Type 1 diabetes haven't changed much in the past decade.

Khambatta, a nutritionist based in San Francisco, was diagnosed with the disease at the age of 22. Each day, he pricks a finger between six and 10 times. He uses a lancet to draw a little blood, which he puts on a test strip, and then he feeds the strip into a glucose meter to check his blood sugar levels. 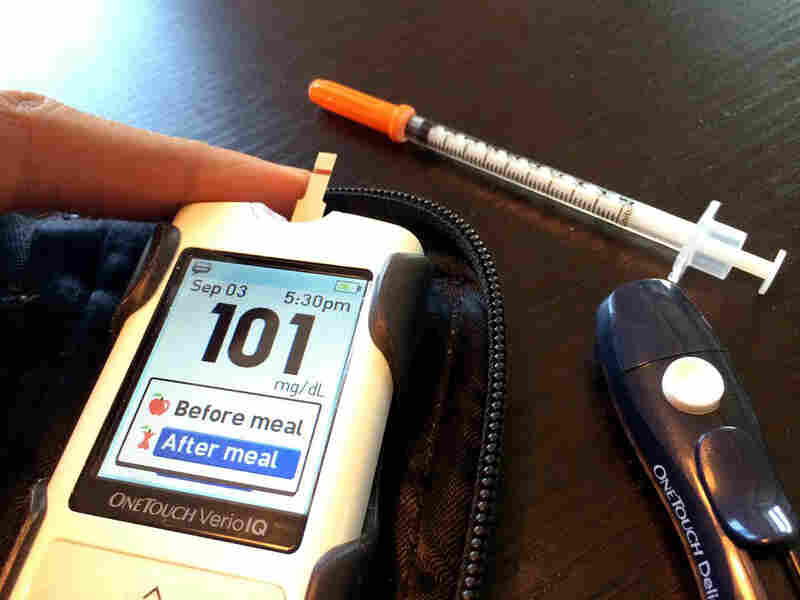 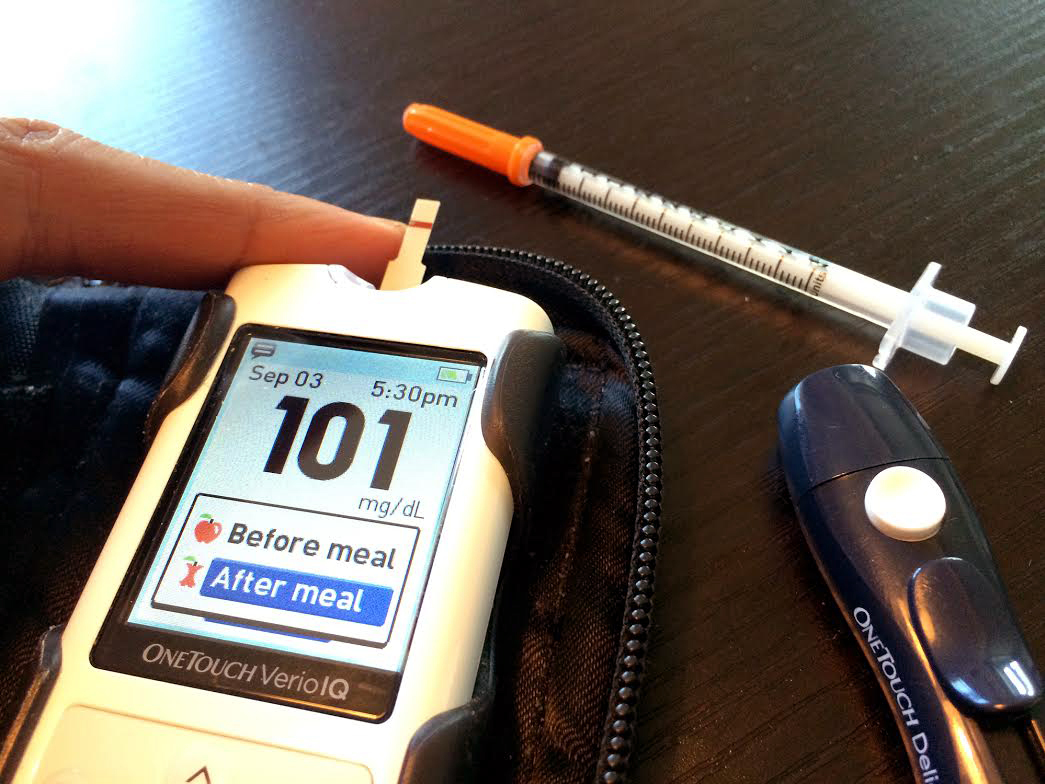 Nutritionist Cyrus Khambatta uses his glucose meter and lancets to check his blood sugar six to 10 times a day.

Before meals and exercise, he injects himself with a syringe filled with insulin. He dials up the amount of insulin based on the data from the glucose meter. The insulin required depends on many factors, including stress, sleep, exercise and diet, Khambatta explained, and involves a lot of attention to detail plus a little intuition.

"Unlike a migraine or acne, diabetes management is all about developing an understanding and manipulation of numbers over time," he said. "Diabetes is very quantitative."

Khambatta describes his style for managing disease as "old school" compared with some of his peers. Many other people with diabetes use more modern alternatives for glucose monitoring, such as a patch with tiny needle-based sensors under the skin that connects to a transmitter and an insulin pump.

But when Khambatta tried those options, he found they were still a lot of work. The sensor needed to be changed every two to three days, and the equipment served as a constant visual reminder of his condition. "I didn't feel like a normal human being," he said.

In the near future, he said, he also hopes that companies will develop non-invasive, continuous glucose monitoring, which wouldn't draw blood or cause pain or trauma.

"That's the Holy Grail," said Cameron Sepah, medical director at Omada Health, a San Francisco-based company that focuses on technology for diabetes prevention. Sepah said such a sophisticated blood sugar-tracking system could be paired with a device that delivers insulin, and thus act as an "artificial pancreas."

"Health companies have been working on this for years," he said. "But Google has a history of taking on very ambitious projects."

Google made a name for itself with search technology, but it has dabbled in more ambitious moonshot projects, from self-driving cars to stratospheric Internet balloons.

The life sciences team, which initially worked out of Google's secretive research arm, Google X, spun out from the Google search engine business in August. Both entities will be held under an umbrella organization called Alphabet.

The life sciences unit is led by molecular biologist Andy Conrad, who has helped the company secure partnerships with top drug makers and medical device companies. Conrad seems to be taking a different tack than the the ill-fated Google Health team, which offered a personal health record product and closed in 2011 because of a lack of traction. The life sciences team is seeking help from more established players in the medical sector.

Google Life Sciences earlier this week announced a partnership with Sanofi, maker of an insulin inhaler and a slew of other products for people with diabetes. Google is also working with Johnson & Johnson on surgical robots, Biogen on potential treatments for multiple sclerosis and Novartis and Dexcom on diabetes-related projects.

But the diabetes market appears to be the primary focus. Data and analytics is Google's area of expertise, and as Miller puts it, diabetes management is fundamentally an "information problem."

Patients with diabetes lack clear information about how variables like nutrition and exercise affect their blood sugar levels, she said. And these kind of insights could help them adjust their insulin levels and avoid serious outcomes, like stroke, heart disease and hypoglycemia.

But don't expect any of the products from the Life Sciences team to hit the market next week. Given the technical challenges and the regulatory requirements, experts say, it could take years before any new device reaches patients.