Accessibility links
School Nurses Stock Drug To Reverse Opioid Overdoses : Shots - Health News With deaths from heroin and painkillers on the rise, more nurses at high schools and middle schools are prepared to intervene in the event of an overdose on school grounds. 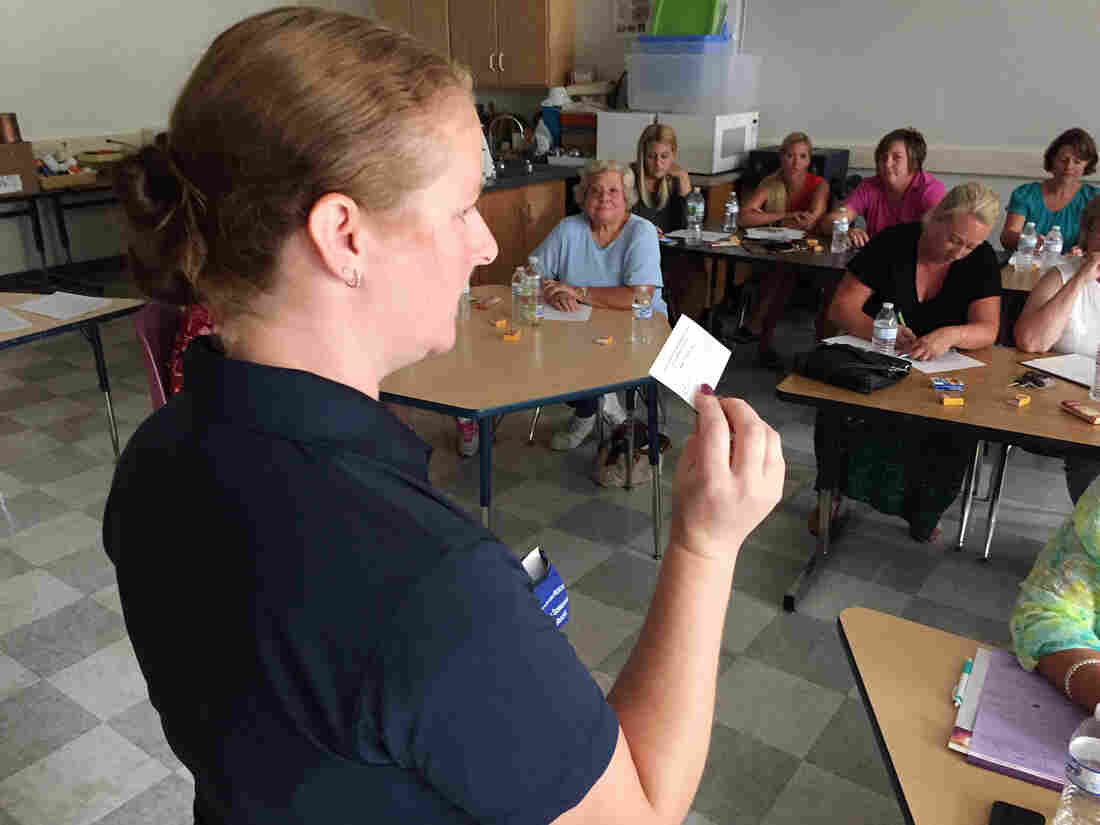 Katie Serio, director of treatment and prevention at the Council on Alcohol and Substance Abuse of Livingston County, N.Y., trains a group of school nurses to use the overdose antidote naloxone at Dansville High School. Michelle Faust/Side Effects Public Media hide caption 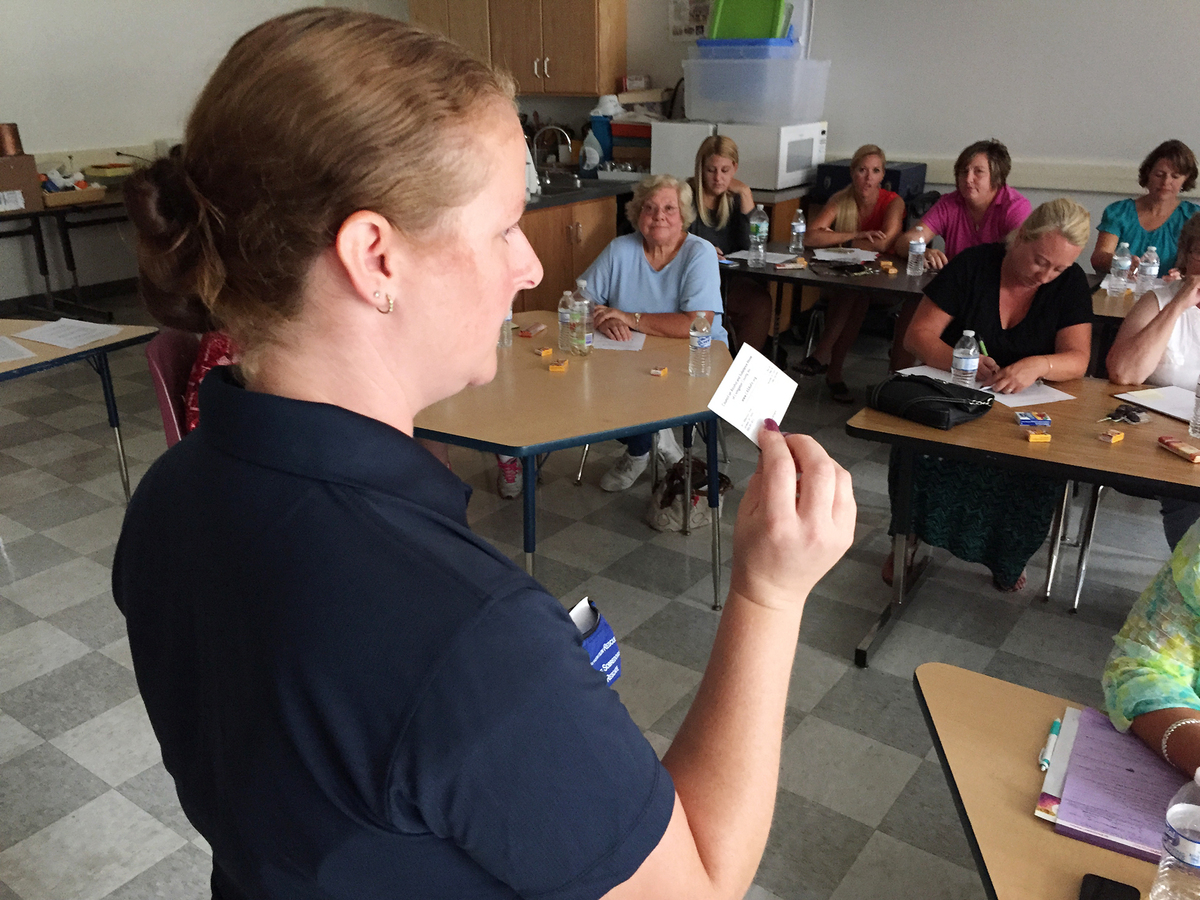 Katie Serio, director of treatment and prevention at the Council on Alcohol and Substance Abuse of Livingston County, N.Y., trains a group of school nurses to use the overdose antidote naloxone at Dansville High School.

AnneMarie Zagari found her teenage son unresponsive on the couch after he took too many opioid painkillers in 2011. She began pounding his chest and slapping his face, and finally succeeded in reviving him by giving him CPR. It was a terrifying moment. And that panic wouldn't have been necessary if she'd had access to the drug naloxone (also known as Narcan), which can instantly reverse an overdose.

"It would have been instant revival," Zagari says.

The experience led her to advocate for greater access to naloxone in New York. Family stories like hers, of teen overdose, have inspired the New York legislature to try to get the drug where young people are: public schools.

In most places around the country, if a teen has an overdose at school, nurses can do nothing but call 911 and wait for the paramedics. New York changed its laws this year to allow nurses to add naloxone to their inventory; the state also allocated $272,000 in the budget to pay for it. Schools in at least four other states including Vermont, Massachusetts, and Delaware have adopted similar policies.

No one is keeping track of how many kids are overdosing in schools, but it is happening, some nurses say. Since 2001, overdoses from heroin and opioid painkillers combined have more than tripled. And, while there is no evidence that opioid abuse is rising among teens, nearly one in four report having abused or misused a prescription drug, according to a recent study. In an effort to protect these kids, more schools are weighing the need to stock drugs that can stop an opioid overdose.

One of the first districts in New York to bring in naloxone is Dansville Central School district in western New York. The week before school started, the district hosted a training attended by nurses from 11 rural districts in the region to learn about the emergency medication. Nurses opened kits containing two doses of intranasal naloxone. In groups of three or four, they practiced spraying the medication onto brown paper towels, and got answers to questions like, "How many doses should we give?" and "What if the patient is a very young child?"

Dansville's prevention specialist, Dawn Landon, organized the training with support from a local nonprofit and says the training is actually quite easy. "What the district is putting forth, as far as an investment, is an hour of their nurse's time," she says. "And an hour of a nurse's time in order to save anyone's life — it's minimal."

But the decision isn't so clear-cut for many districts. Many school administrators are concerned about whether using naloxone at a school will get them sued. What if something goes wrong — like a patient is misdiagnosed, or the medication has gone bad?

In New York, these fears are largely unfounded, explains Jay Worona, general counsel for the New York State School Boards Association. The legislature, he explains, made it hard to sue, by specifying that nurses are protected from liability if they act in good faith.

"Some districts might, nevertheless, fear that they would have to defend this type of lawsuit," Worona says, "even if, ultimately, they were successful."

In the neighboring state of Vermont, the Hartford school board initially voted last fall against using naloxone in schools. The school board's chief, Lori Dickerson, says she and her fellow members didn't want to move forward with such a program until the nursing staff was confident.

"We were worried," Dickerson says. "We were really worried about liabilities." But in the end, the district voted last month to bring naloxone into the schools.

The Hartford school nurses bought into the idea after the National Association of School Nurses endorsed naloxone in June. Rebecca King co-authored the association's statement. She says nurses don't have time to waste in an overdose, because opioids cut off oxygen to the brain and moments can count. School nurses shouldn't have to wait for the ambulance to act.

"They are emergency responders and they should have naloxone available, just like they have other medications, such as epinephrine," King says.

Paul Alioto, the superintendent of schools for Dansville, says he has no hesitation about assuming liability if that's called for. "We want to be in a position where we're equipped to save a life if that's necessary," he says. "They can sort the paperwork out and we can deal with the courts later, but our first priority is to keep our kids safe."

This story was produced with Side Effects Public Media, a reporting collaborative focused on public health.