Accessibility links
A Nurse Reflects On The Privilege Of Caring For Dying Patients : Shots - Health News Palliative care nurse Theresa Brown provides in-home, end-of-life care to patients. "It's incredible the love that people evoke" at the end of their lives, she says. Brown's new book is The Shift. 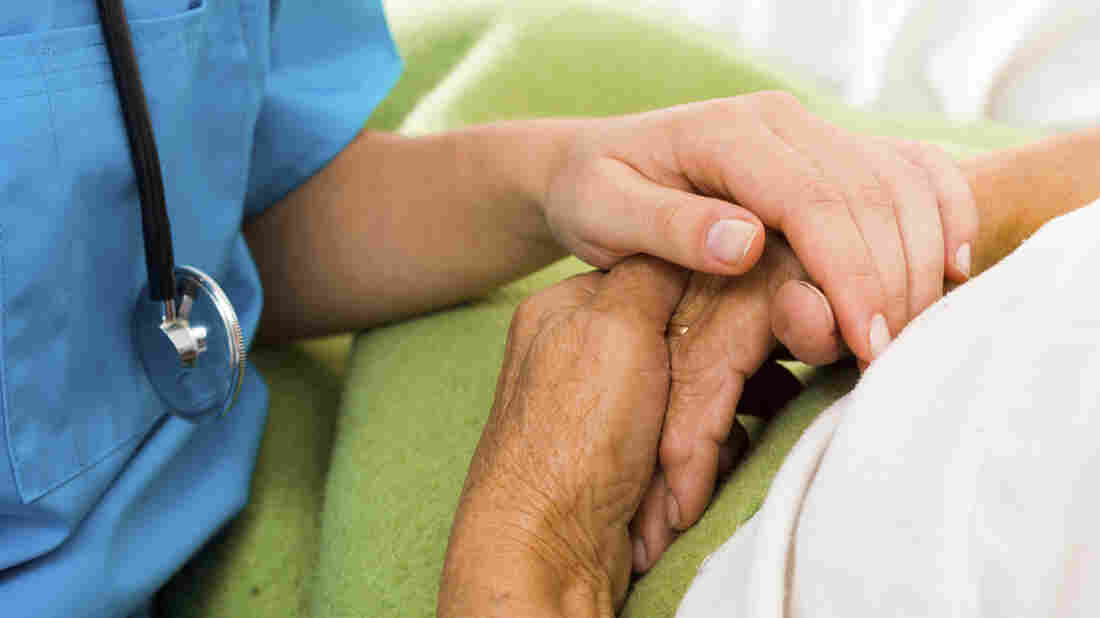 As life draws to an end, compassion is more important than food. Kacso Sandor/iStockphoto hide caption 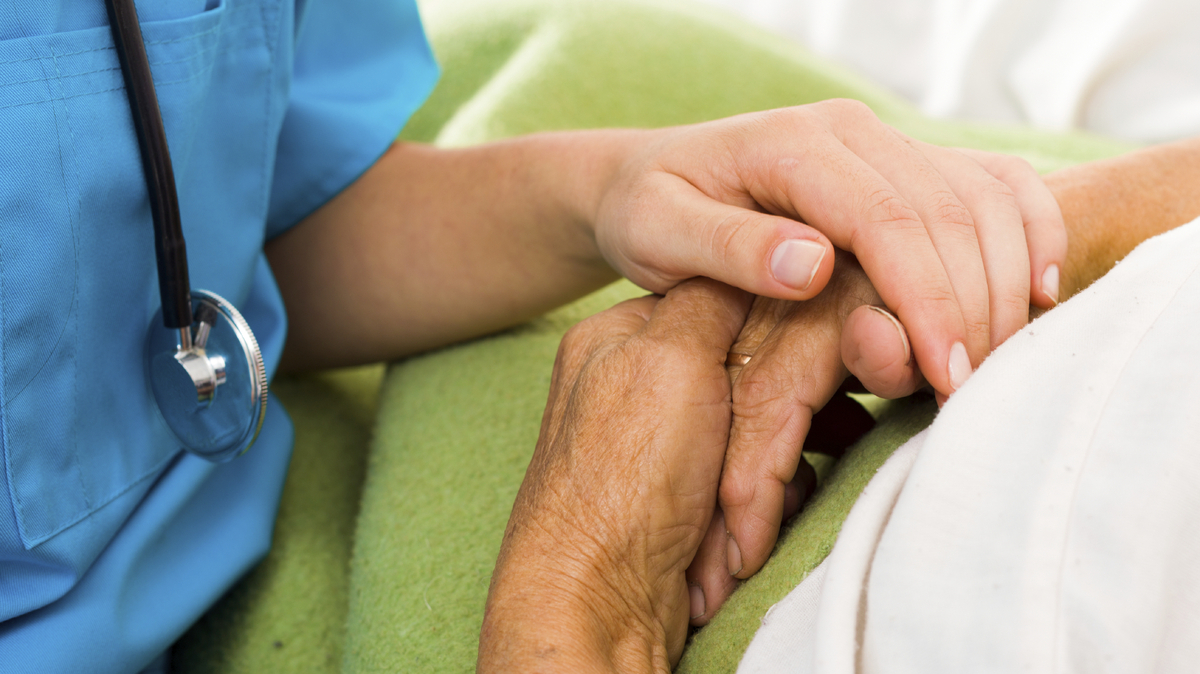 As life draws to an end, compassion is more important than food. 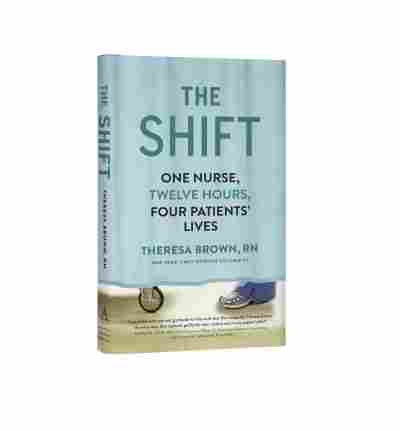 Palliative care nurse Theresa Brown is healthy, and so are her loved ones, and yet, she feels keenly connected to death. "I have a deep awareness after working in oncology that fortunes can change on a dime," she tells Fresh Air's Terry Gross. "Enjoy the good when you have it, because that really is a blessing."

Brown is the author of The Shift, which follows four patients during the course of a 12-hour shift in a hospital cancer ward. A former oncology nurse, Brown now provides patients with in-home, end-of-life care.

Talking — and listening — are both important parts of her job as a palliative care nurse. This is especially true on the night shift. "Night and waking up in the night can bring a clarity," she says. "It can be a clarity of being able to face your fears, it can be a clarity of being overwhelmed by your fears, and either way, I feel like it's really a privilege to be there for people."

Sometimes Brown finds herself bridging the gap between patients who know they are dying and family members who are still expecting a cure. "There can be a lot of secrets kept and silences. ... One thing that palliative care can be really good at is trying to sit with families and have those conversations," she says.

On cutting costs and stretching nurses too thin

There's a sense that you can stretch a nurse just like an elastic band and sort of, "Well, someone called off today." That means a nurse calls in and says that she's sick or her car broke down or he won't be there, and sometimes we're able to get someone onto the floor to take that person's place, but often we're not. Or an aide might not be able to show up for whatever reason, and then the assumption is just, "Well, the nurses will just do all the work that the aide would've done," and the problem is that people do not stretch like rubber bands, and even rubber bands will break if you stretch them too far.

On loved ones wanting to feed their dying family members 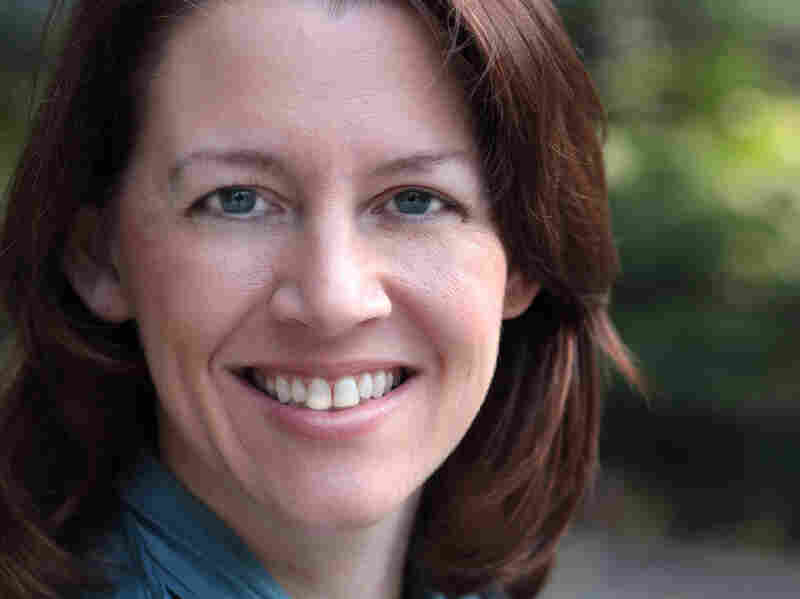 Theresa Brown is a critical care nurse in Pittsburgh. Her previous book is Critical Care: A New Nurse Faces Death, Life, and Everything in Between. C. Ken Weingart/Algonquin Books hide caption Theresa Brown is a critical care nurse in Pittsburgh. Her previous book is Critical Care: A New Nurse Faces Death, Life, and Everything in Between.

Food is so fundamental, and their feeling is "I'm letting my husband starve to death and that's wrong." So I have to talk them through the process of the body slowly going in reverse. All the processes we think of as normal and that are integral to life, they're all slowing down. And so the body just doesn't need food when someone gets very close to the end of their life and, in fact, they found that forcing someone to eat can mean that they just have this food sitting in their stomach, they're not able to digest it, can actually make them more uncomfortable. So I talked to [one family member] about that, but tried to do it as gently as possible, while also acknowledging the incredible love that was motivating her and trying to honor that, but make it clear that she needed to show her love by being close with her husband, by holding his hand, by talking to him, but not by feeding him.

On whether patients ask if they're dying

No, they don't. ... I think it's because they're afraid. They want to just take things day by day. I did have a wife once ask me. She said, "You know, I'm not new to this, and I want you to just tell me. Is he dying?" And at that point I was a pretty new nurse and I didn't have the experience to know to say, "Yes." Now I would know to say that. ... I got a sense that she really wanted to know and no one else was telling her. ...

Physicians can have a mindset of "we're thinking positively, we're focusing on the good that can come, and we're not going to talk about 'what if it doesn't work out.' " And they will sometimes pull the nurse aside and say, "What's going on?"

On leaving the hospital setting for palliative care

Nurses Have To Translate When Medical Devices Fail To Communicate

On traveling to a patient's home

When I started, I thought, "I can't believe I'm doing this. I can't believe I just drive up to these houses and go inside them." I live in Pittsburgh, but it can get very rural feeling actually pretty quickly, and I remember ... going to [a house] that was already through back-country roads and then down a gravel driveway, and I thought: "What am I doing? Am I insane?" And then I went into this house, and this family was so loving and amazing and wonderful, so it was a great education for me not to judge. And I know that my workplace checks out and makes sure that the places we're going are real, so that's comforting, but it's definitely a giant leap of faith, and you just have to make that leap.

On home care versus hospital care

Often in the hospital they can be more comfortable in terms of we're relieving their pain, we're getting them anti-nausea medications very quickly, but ... they're not as comfortable with themselves, and in their homes they seem much more comfortable with themselves and with the people around them, and I had never thought about those two things as being so distinct, but they are. So the question then is how do we give people care that marries those two things, because they're both so important.

On how patients express appreciation to nurses

A very popular gift in my hospital was Starbucks [gift] cards. ... Often people bring in cookies and chocolate and that's wonderful, but I remember one nurse saying, "You know, I wish someone would just bring in a lasagna." ... Because we never have time to eat and then you go into the break room and you're hypoglycemic and you see all this chocolate, and so you eat all this chocolate, which doesn't really help you feel that much better in the long run. So to actually drop off a meal is wonderful.