Hospitals Struggle To Help Farmworkers Who Speak Triqui Or Mixteco

Hospitals Struggle To Help Farmworkers Who Speak Triqui Or Mixteco 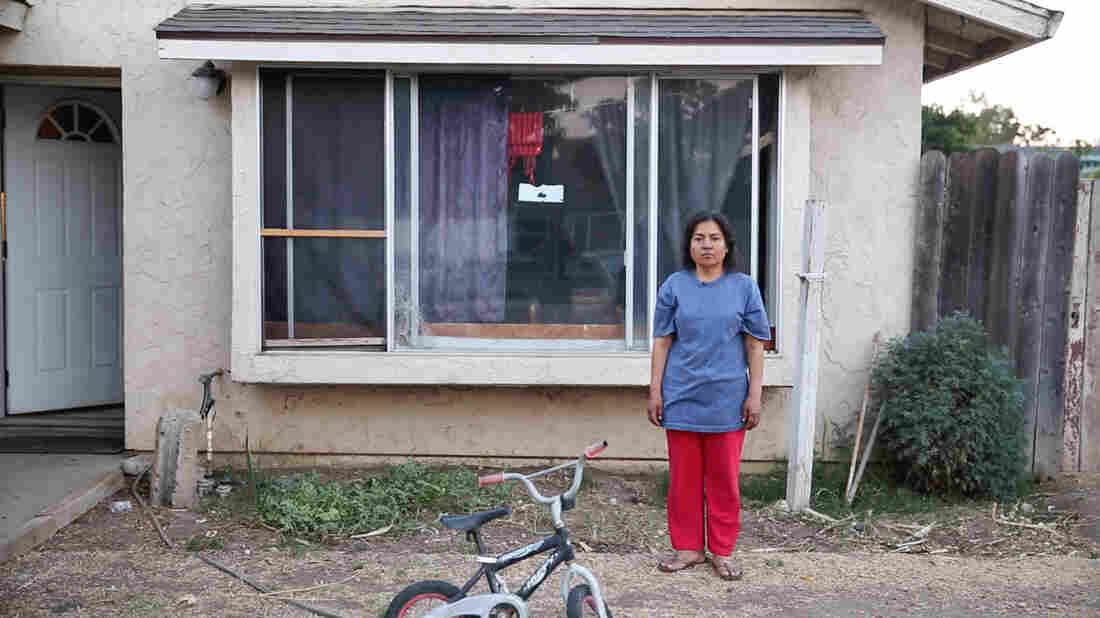 When Angelina Diaz-Ramirez, an immigrant farmworker from Mexico, suffered a heart attack, no one at the hospital could explain what was happening to her. She speaks Triqui, an indigenous language in southern Mexico. Jeremy Raff/KQED hide caption 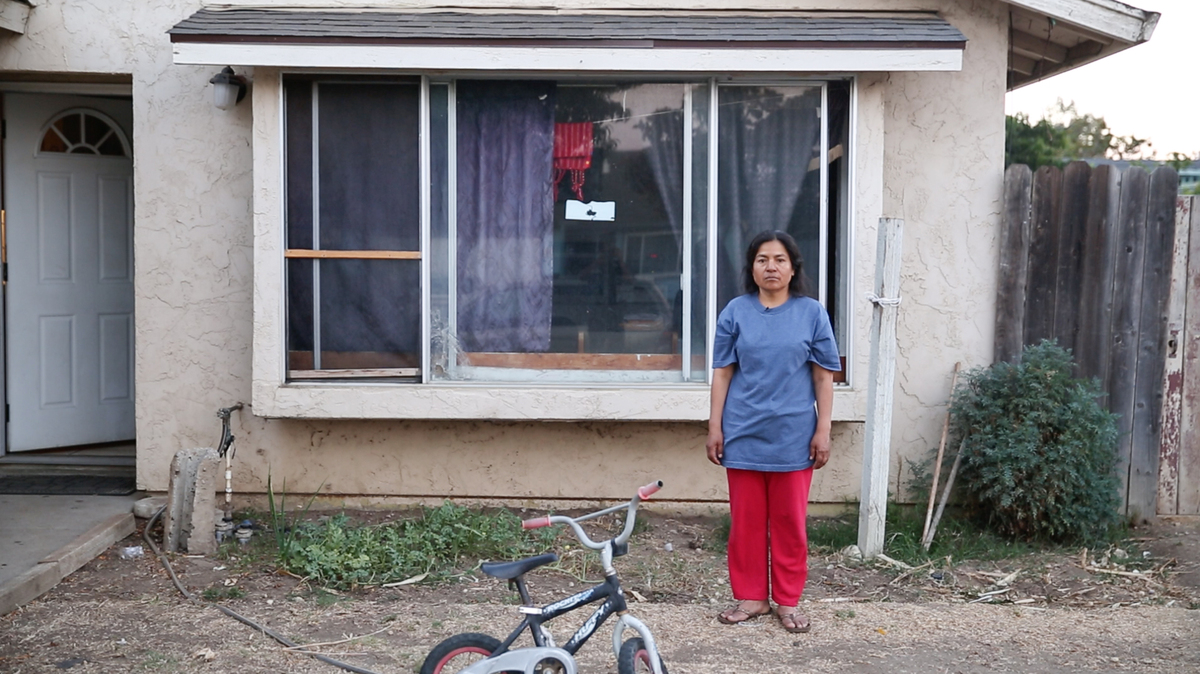 When Angelina Diaz-Ramirez, an immigrant farmworker from Mexico, suffered a heart attack, no one at the hospital could explain what was happening to her. She speaks Triqui, an indigenous language in southern Mexico.

Angelina Diaz-Ramirez had no idea a surgeon was about to cut open her chest. The 50-year-old had been rushed to the hospital from the California field where she worked picking green beans. Doctors said she had a heart attack and that they would do surgery to install a pacemaker.

But Diaz-Ramirez, an immigrant from Mexico, doesn't speak Spanish or English. She speaks Triqui, an indigenous language. And the hospital had no one who could translate the doctors' words for her.

"None explained anything to me," said Diaz-Ramirez. "I was scared, but I didn't have a choice."

She's not alone. One-third of farmworkers in California speak indigenous languages from southern Mexico, including Triqui and Mixteco. Many don't speak Spanish or English.

Interpreters are "absolutely necessary," said Alicia Fernandez, a medical interpretation expert at the University of California, San Francisco. Quality health care and basic informed consent can be nearly impossible without them.

That's why using improvised sign language, or asking a child to interpret — just getting by — is simply not good enough, said Fernandez. "Getting by leads to mistakes," she said. "And mistakes can be tragic, for both the patient and the physician."

Erica Gastelum, a pediatrician in Fresno, Calif., regrets that she rarely has access to an interpreter for her Mixteco-speaking patients. She says without one, "You're not able to provide equal care to all comers."

She remembers a 1-year-old boy with fatal congenital heart disease. Doctors had exhausted every option, and the family was gathered in the intensive care unit.

"This is it, this is the moment where we're going to disconnect the tubes," said Gastelum. "It seemed like they understood. But in such a crucial moment like that, it would have been so much better to have a culturally sensitive, in-person interpreter."

Most hospitals, including Gastelum's, have telephone services designed to let doctors call an interpreter for any language. But the system doesn't always work for more unusual languages. 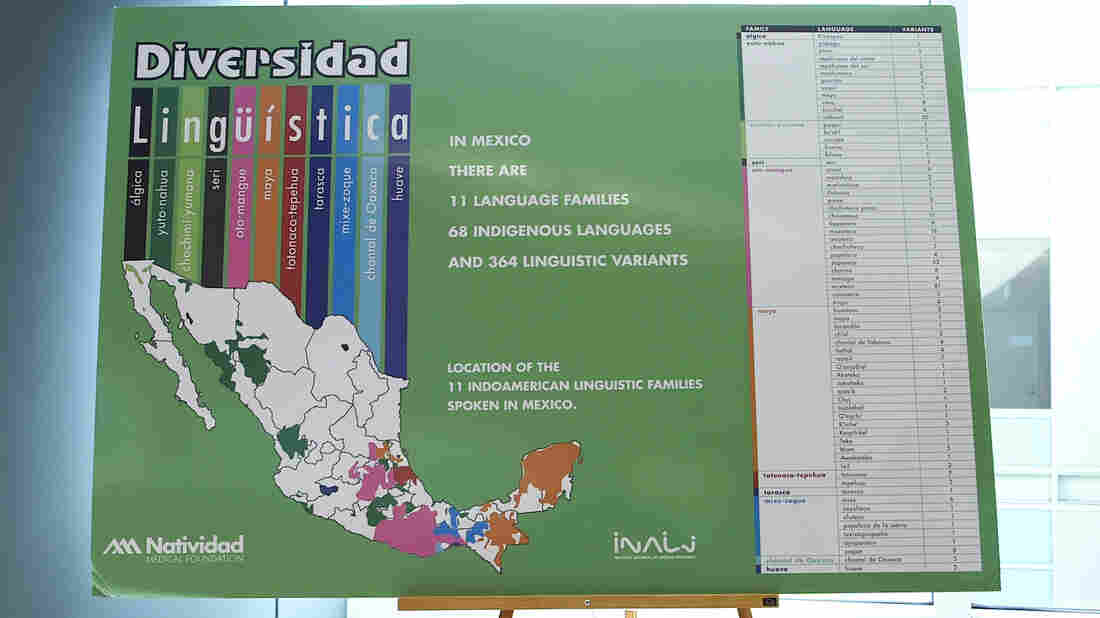 This map shows where Mexican indigenous languages originate. Triqui and Mixteco belong to the Oto-Mangue family, in the southwest of the country. Jeremy Raff/KQED hide caption 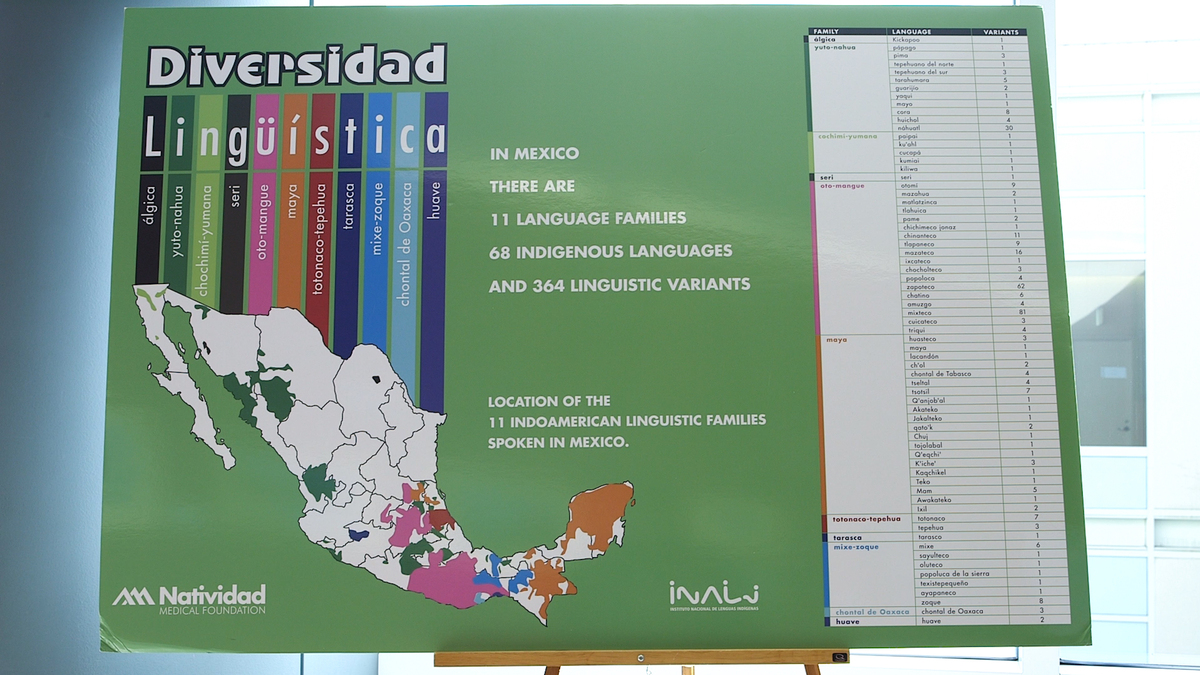 This map shows where Mexican indigenous languages originate. Triqui and Mixteco belong to the Oto-Mangue family, in the southwest of the country.

"When you try to use the phone interpreter line to get the indigenous speaker, you'll be on hold for like two hours," said Jasmine Walker, also a pediatrician in Fresno. "Then when you get them, they don't actually speak the language that you need."

Seth Holmes is a physician who lived and worked alongside Triqui migrant farmworkers for 10 years and wrote about his experiences in the book Fresh Fruit, Broken Bodies. As the migrants followed crops up and down the West Coast, they often asked Holmes to accompany them to health clinics.

In dozens of clinics throughout California, Washington and Oregon, he said, "I have never seen any Triqui person get a medical interpreter."

Hospitals may underestimate how many indigenous patients they have and how many interpreters they need because many providers assume all Mexicans speak Spanish. Some indigenous people may be afraid to call attention to themselves by asking for an interpreter because they are undocumented.

"They don't know that they're entitled to someone who speaks their language," said Leoncio Vasquez, director of the Binational Center for the Development of Oaxacan Indigenous Communities in Fresno. He has been training interpreters for 15 years.

Any health care facility receiving public money has a legal obligation under both state and federal law to provide an interpreter to every patient who needs one. But only a few health care providers have made California's 120,000 indigenous farmworkers an explicit priority. 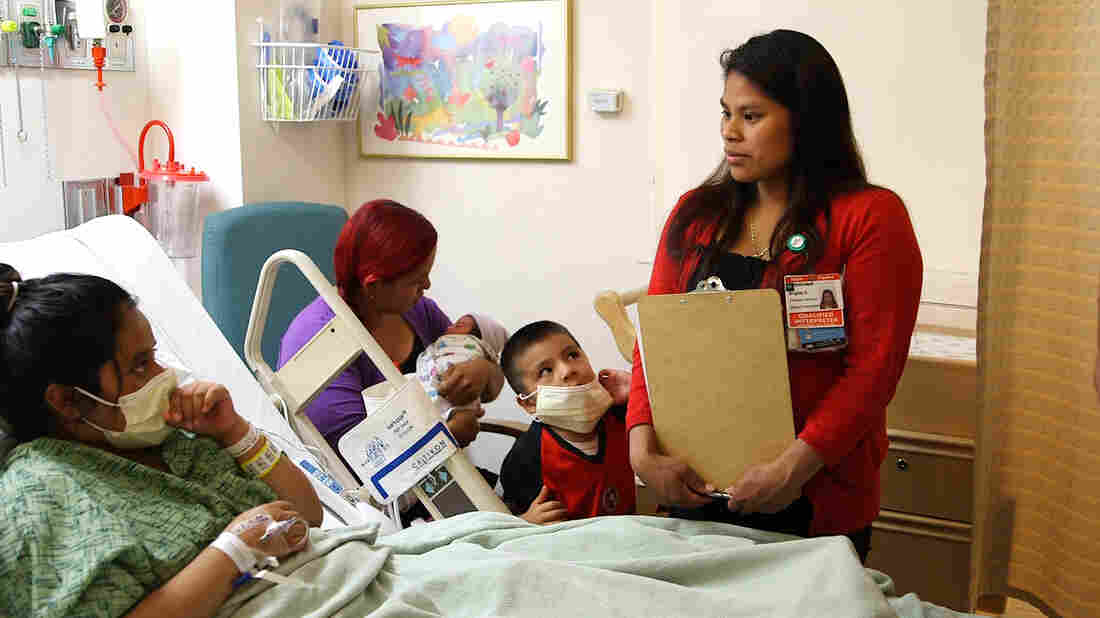 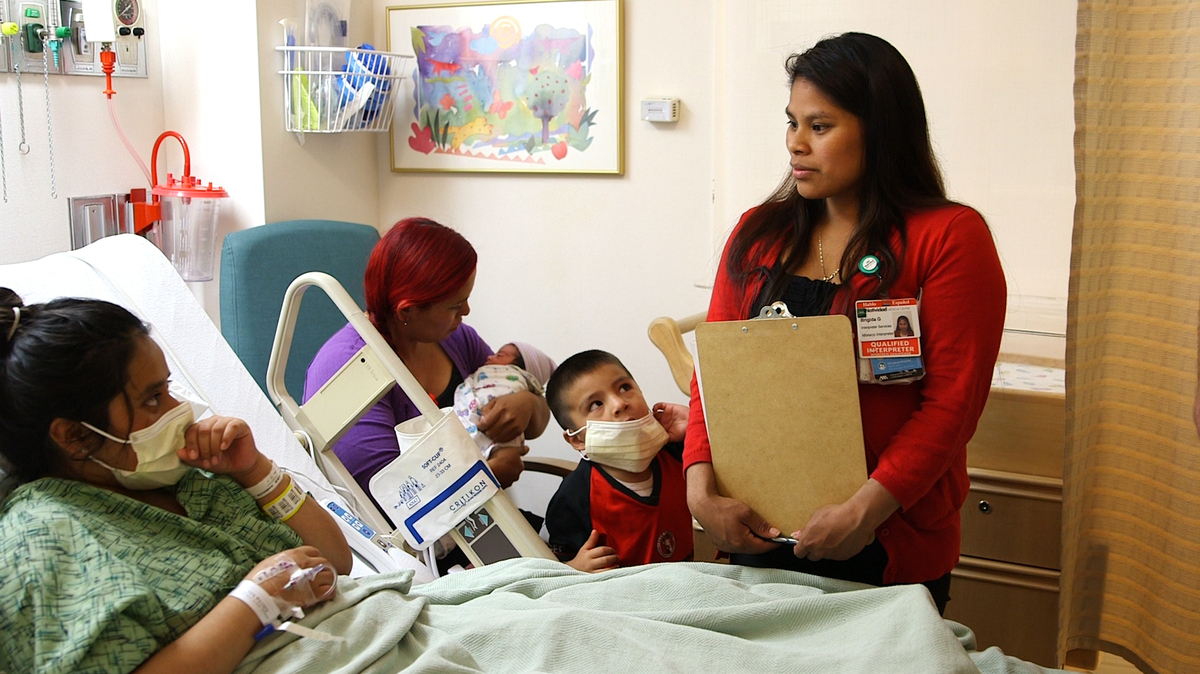 Before becoming an interpreter at Natividad Medical Center in Salinas, Calif., Brigida Gonzalez (right) worked in the strawberry fields.

Brigida Gonzalez, wearing a big "Qualified Interpreter" badge, hustles around Natividad Medical Center in Salinas, Calif. It's a big building and she's needed all over.

Today she's a professional employee at a big hospital. A year ago, she was picking strawberries nearby.

In the fields one day, another picker noticed that Gonzalez spoke English, a rarity in agriculture. She suggested she look into Natividad's training program.

People at Natividad were thrilled to hear from Gonzalez, "because it was so hard to find someone who spoke English, Spanish and an indigenous language like Mixteco and Triqui," she said.

Gonzalez completed Natividad's six-month training program for indigenous interpreters, the first of its kind in the United States, and now works there part time.

The need for trilingual interpreters like Gonzalez is growing, and it's not just hospitals.

Four hours down the coast in Oxnard, all three school districts have hired Mixteco interpreters, and the police have one on contract.

Altogether, there are about 20 Mixteco speakers making a good living with their language skills in Ventura County.

These opportunities are one reason why Argelia Zarate, the Oxnard School District's first full-time Mixteco interpreter, encourages students to practice their Mixteco so they don't lose it.

"I didn't go to college, yet I have this job," said Zarate, "because the community is growing so big that they don't need bilinguals — they need trilinguals." 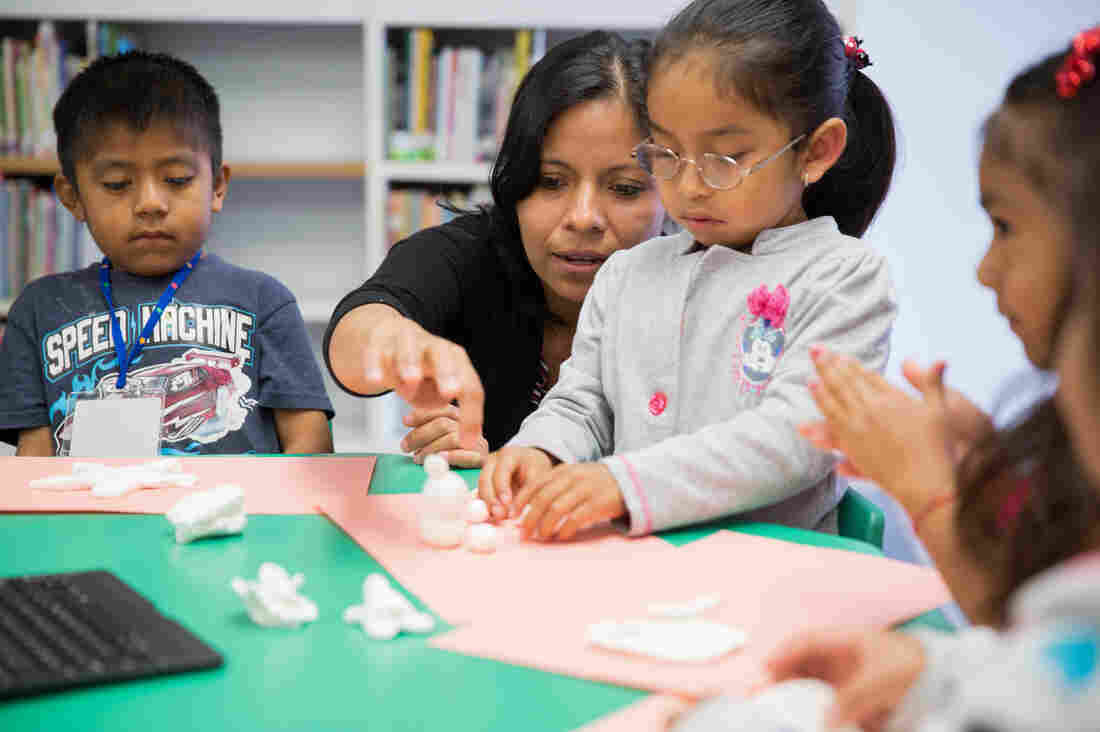 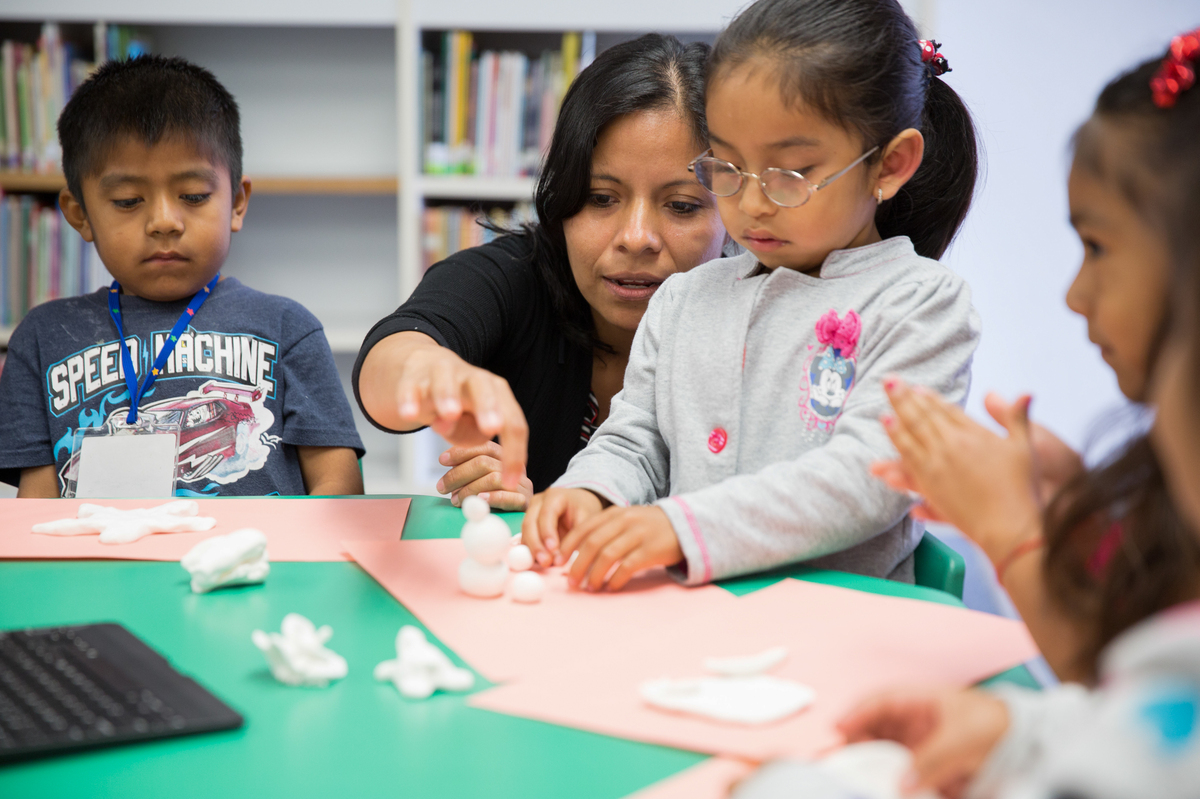 The U.S. Bureau of Labor Statistics expects employment of interpreters and translators to grow by 46 percent between 2012 and 2022. Driving that demand is the 158 percent increase since 1980 in the number of people who speak a language other than English at home.

Nationally, the median hourly wage for interpreters is $25, compared with $9.09 for farm work.

Zarate says the better pay, stable hours and a chance to serve her community all make interpreting a big step up from fieldwork.

"Here everybody is nice to you. They talk to you, appreciate what you do," Zarate said at the elementary school where she works. "In the fields, they treat you like you're nothing, a slave working for a little bit of money."

The Mixteco/Indigena Community Organizing Project has trained dozens of interpreters in Ventura County and has pressured public agencies to make use of them.

"Ventura County has invested in having better language access than most parts of California, and honestly most parts of Oaxaca," said Margaret Sawyer, the group's development director, referring to the Mexican state that many Mixteco migrants are from.

But most hospitals rely on freelance part-time interpreters, who have a hard time making a living.

"They will have you for two or three hours, then you're done for the whole day," said Israel Vasquez, a trilingual interpreter in Ventura County, Calif. He worked in hospitals, clinics, social service agencies, school and courts in Ventura County but eventually quit because he couldn't get enough hours. He says, "You can't really live off that."

Part of the problem, Schinske said, is that even though federal law requires hospitals to provide interpreters, there is not a direct federal funding stream to pay for those services.

"You get a lot of this sentiment from hospitals: 'Look, we're trying to get people services in their language, but it is a nicety, not a necessity,' " said Schinske.

The indigenous interpretation programs at Natividad Medical Center are funded by private donations from agricultural businesses in the area, who have contributed $1.7 million since 2010.

Meanwhile, a bill that would make it easier for hospitals to get federal money for medical interpreters has stalled in the California Legislature.

Farmworker Angelina Diaz-Ramirez returned home after her surgery with a new pacemaker ticking in her chest and a stack of printed instructions that she couldn't read.

"I didn't know what to do," she said through an interpreter. "I had strong pain. Should I call them back?"

Diaz-Ramirez didn't know who her cardiologist was, how to get an appointment or which medications to take. "I just felt very sad," she said.

Every week, indigenous people with these same questions visit Leoncio Vasquez at his storefront office in Fresno.

He looks through their paperwork, pieces together a backstory and helps them figure out what to do next — something that should have happened at the hospital or clinic, with one of the dozens of interpreters Vasquez has already trained.

But those interpreters "can't find jobs related to interpreting," said Vasquez. "Some go back to the fields to do farm work."

This piece was produced with support from the Institute for Justice and Journalism. It was first published in KQED's State of Health blog.