Accessibility links
Why Is A South Korean Doctor Cloning Dogs? : Shots - Health News A lab in Seoul is the only place in the world known to commercially clone dogs. But often the dog clones are sickly, critics say, and many other dogs are subjected to surgery to make a clone. 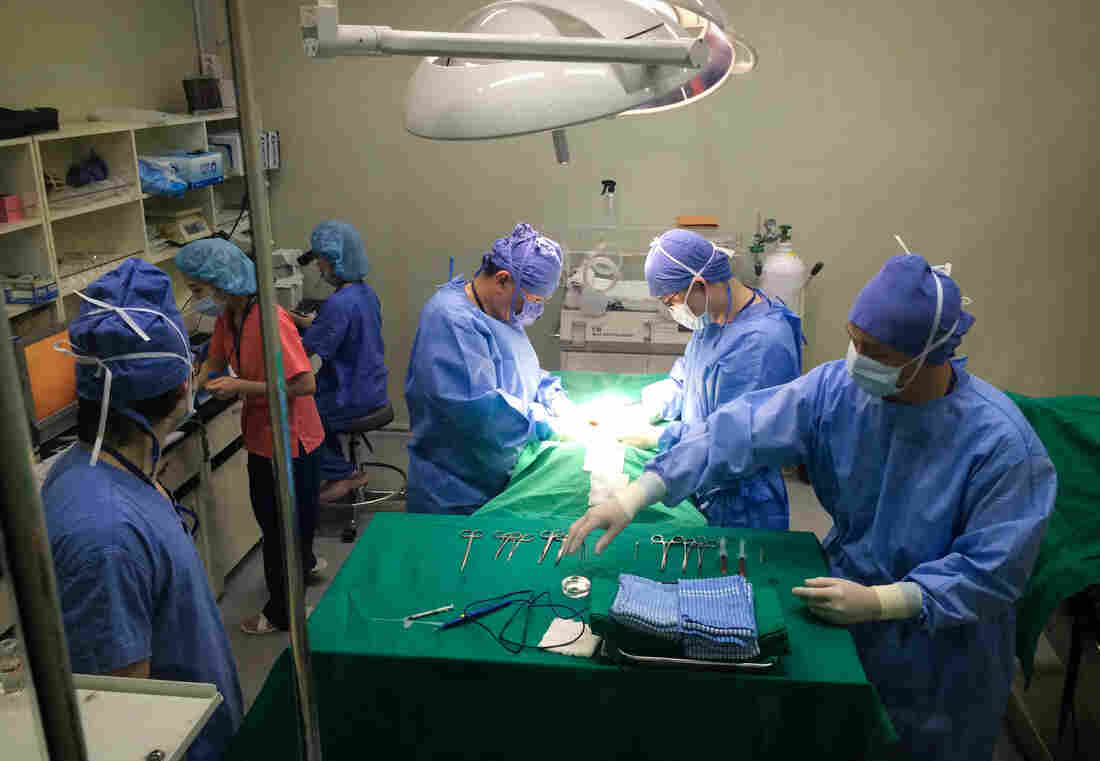 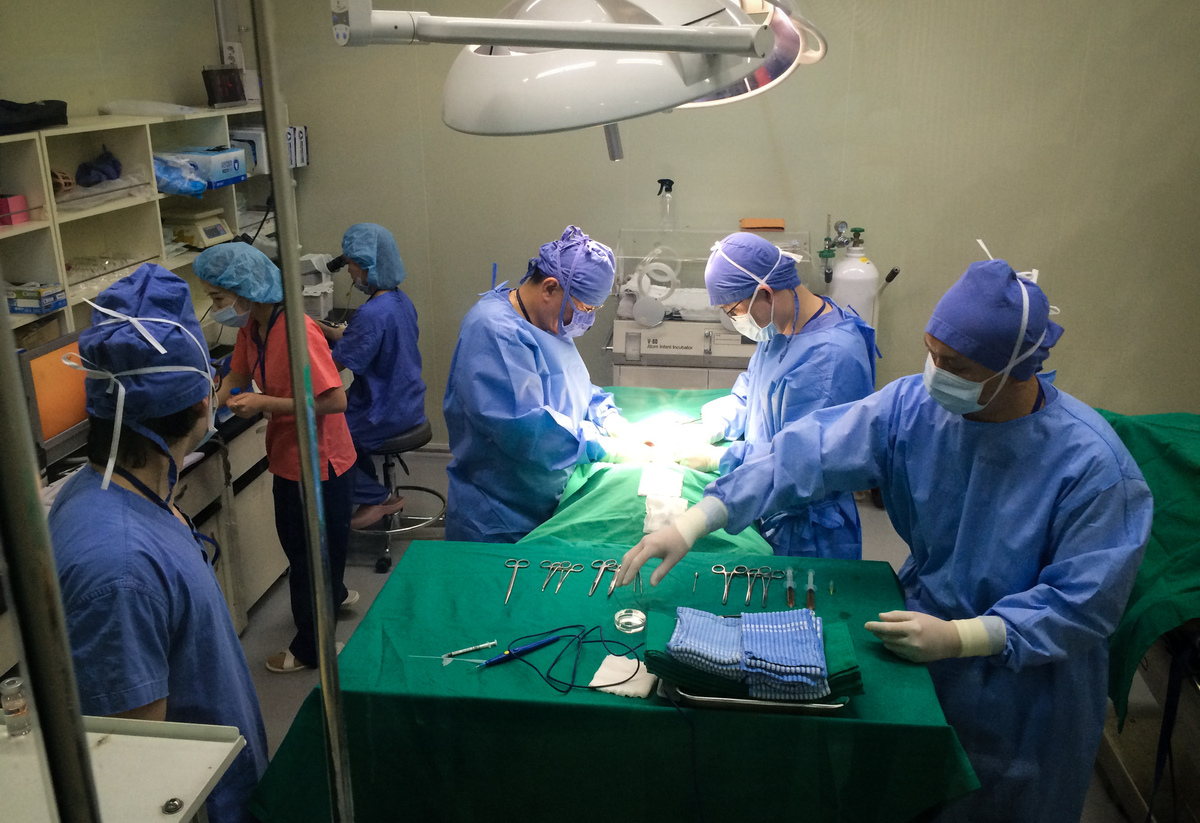 A surgical team at Sooam Biotech in Seoul, South Korea, injects cloned embryos into the uterus of an anesthetized dog.

The Sooam Biotech Research Foundation's sleek marble building is on the outskirts of Seoul, South Korea. After passing through a guarded gate, visitors climb the steps to the entrance and a big door with tinted glass slides open.

"Hello, sir. Nice to meet you, sir," says David Kim, a researcher at the laboratory. "You can follow me. We can go into the clean room. It's the laboratory where we do the procedures — the cloning."

Sooam Biotech is the only lab in the world that makes genetically identical copies — clones — of dogs for pet owners. Nearly 20 years ago, when Dolly the sheep became the first mammal ever cloned from a mature cell taken from an adult animal, many people feared the advance would lead to human cloning.

That hasn't happened. But scientists have cloned several other species since, including cattle, rabbits, mules and cats. The success rates and health of the cloned animals has varied from species to species; Sooam's scientists seem to be the only ones to figure out how to clone dogs.

For $100,000, anyone who has a cell from any dog can attempt to get a clone. The lab says it has cloned more than 600 dogs so far. Many of these clones are created for grieving pet owners, but some are being used by police agencies, including the South Korean National Police Agency. 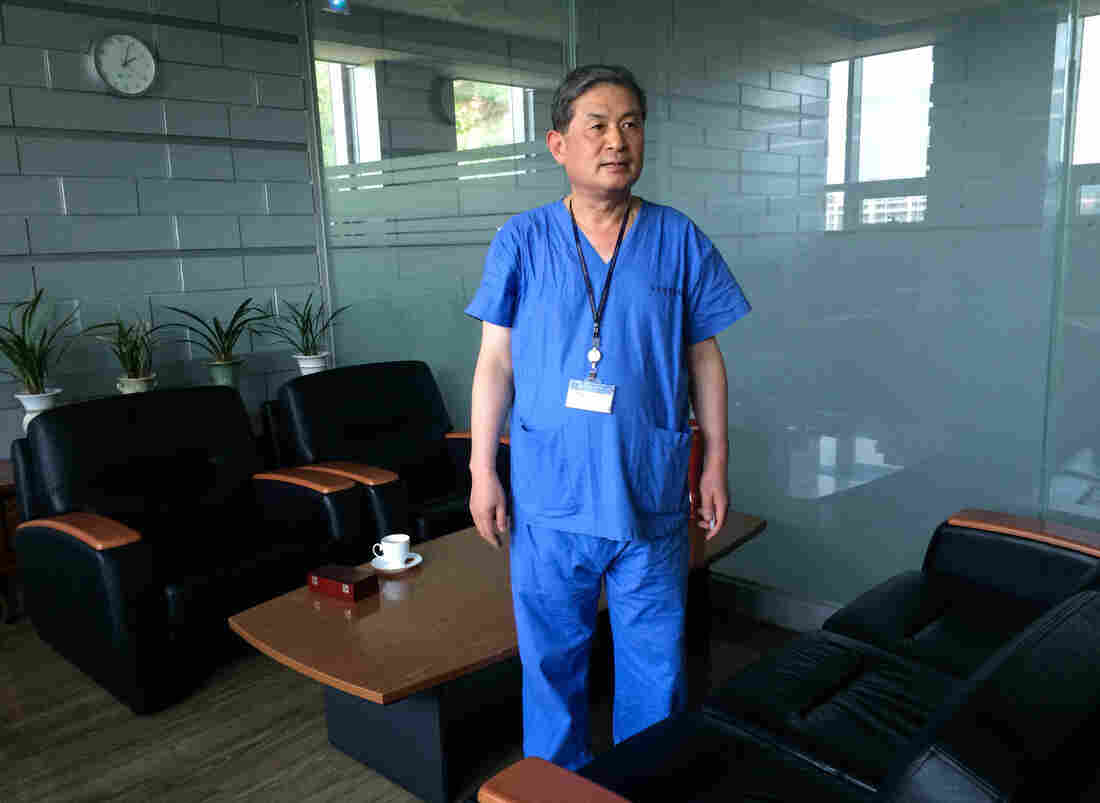 Dr. Hwang Woo Suk founded Sooam's dog cloning service. But he is better known for announcing in 2004 that his research team had cloned the first human embryos. Other scientists found that claim to be fraudulent. Rob Stein/NPR hide caption 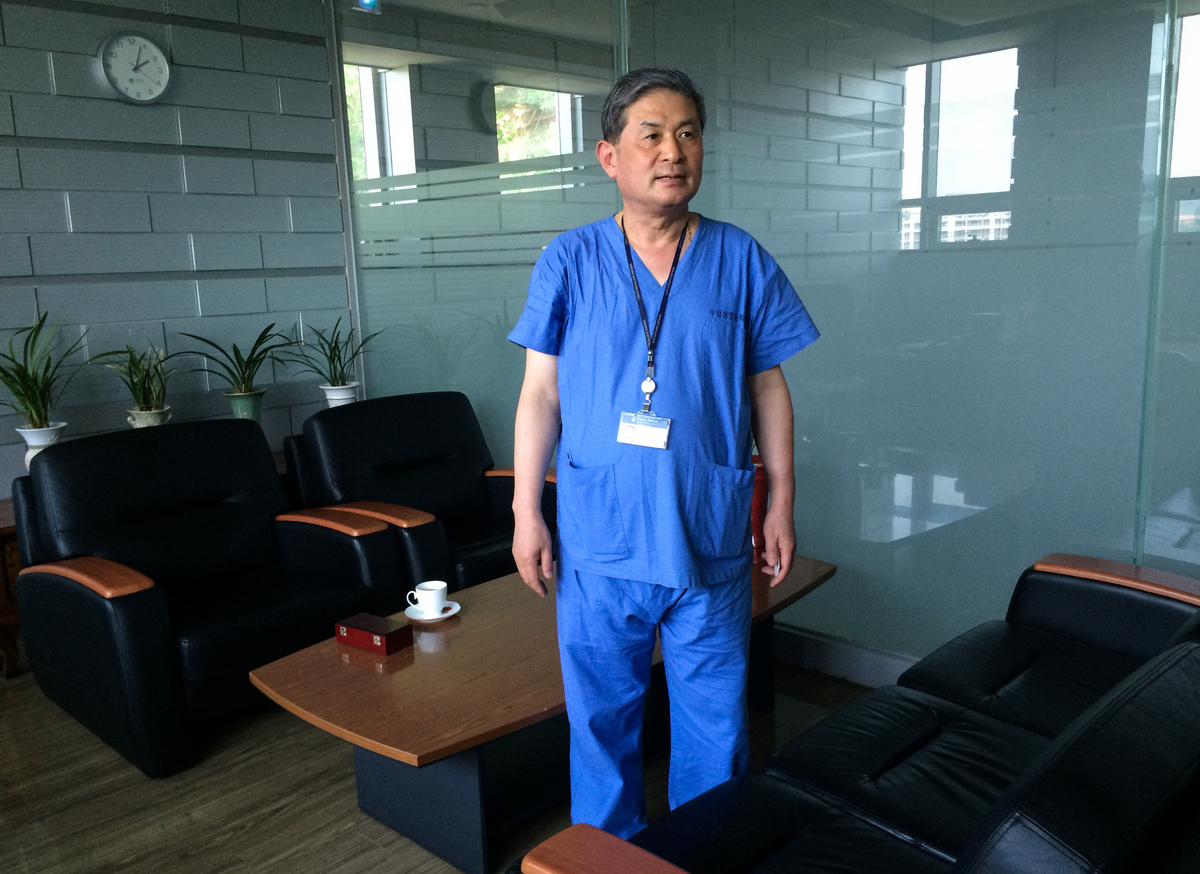 Dr. Hwang Woo Suk founded Sooam's dog cloning service. But he is better known for announcing in 2004 that his research team had cloned the first human embryos. Other scientists found that claim to be fraudulent.

Sooam's dog-cloning service is controversial. It was started by Hwang Woo Suk, who became a scientific pariah in 2006, when his claim that he had created the first cloned human embryos in 2004 to produce human embryonic stem cells was discovered to be fraudulent.

But no one doubts that Hwang is cloning dogs. The big question is: Why? For the money? To fund other research? To reclaim the spotlight? Hwang refused several requests by NPR for an interview, but he agreed to let me tour the facility with Kim, to see how the process is done.

After we change into rubber slippers and blue jumpsuits, Kim leads me into a darkened room that's crowded with technicians peering into microscopes. Kim points to a flat screen on the wall that shows a live feed of what's happening in a petri dish under one microscope. There's a big blob near the center of the dish.

"What you see here on the screen is the egg," Kim says, explaining that to clone one dog, scientists start with an egg from another dog. "The small, blue shining dot that you see is the genetic material, which we will take out now."

A technician gently pierces the egg's outer membrane with a tiny glass tube and withdraws the genetic material.

A Sooam Biotech technician prepares to zap an egg that's been re-injected with a skin cell from a donor dog. The tiny shock can be enough to prompt the egg to start dividing and developing into a viable dog embryo. Rob Stein/NPR hide caption

A Sooam Biotech technician prepares to zap an egg that's been re-injected with a skin cell from a donor dog. The tiny shock can be enough to prompt the egg to start dividing and developing into a viable dog embryo.

"We can see how the DNA is being extracted," Kim says. "So now, what we are left with is a blank egg, in a sense."

Next, the technician injects another tiny blob into the blank egg. It's a skin cell from the animal that's being cloned. A single skin cell contains all the DNA needed to create a genetically identical clone.

"We will insert one cell per egg," Kim says. "With this, the procedure is done."

Well, almost. After that another technician zaps the egg with a tiny bit of electricity.

Within days, if all goes well, the embryos will be ready for transfer into the uterus of another female dog — a surrogate mother.

Kim heads to another part of the lab, stopping on a platform in front of a huge window that overlooks an operating room. Two big brown dogs lie unconscious on tables, each mostly covered by a green tarp. The dogs have tubes down their throats, and their long, pink tongues dangle to the side.

A half-dozen people in blue scrubs and surgical masks scurry around; bits of conversation are audible through a monitor on the wall.

"Are you ready?" one of the surgeons asks the team. He leans over a small opening in the tarp and makes an incision that will give him access to the dog's ovaries.

"We are going to flush out the eggs," Kim explains.

After a few minutes, when the surgeon steps away from the operating table and pulls down his mask, I can see that it's Hwang Woo Suk — the scientist who runs the lab.

"We got 15 eggs from both sides of the ovaries," Hwang says.

They'll take those eggs back to the microscope room, in hopes of turning them into cloned dog embryos.

Hwang moves over to the second dog and starts cutting. She's there to become the surrogate mother for a cloned puppy.

"This is our final process of embryo transfer — using an embryo-loaded catheter," Hwang explains.

After just a few seconds he's injected several previously created embryos into the dog's uterus and steps away from the table. 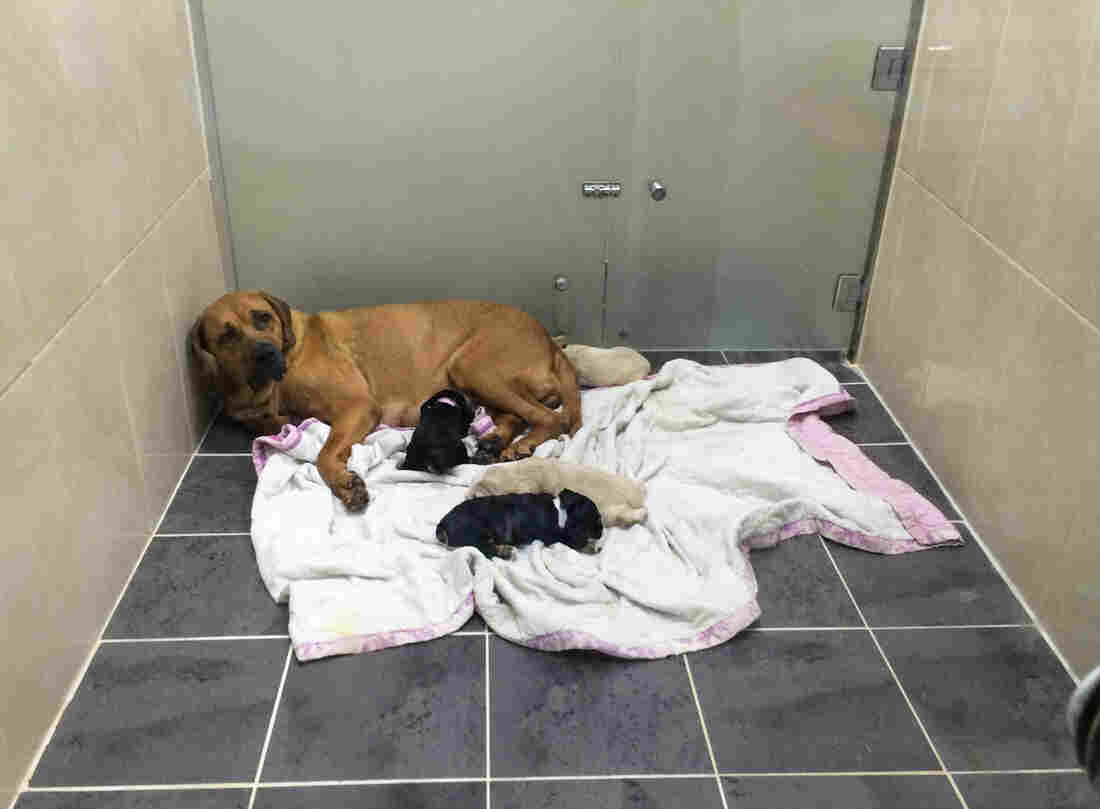 A litter of puppies created at Sooam Biotech. Though clones share the same genes, they aren't exact replicas; developmental changes have an effect on markings, for example. Ron Stein/NPR hide caption 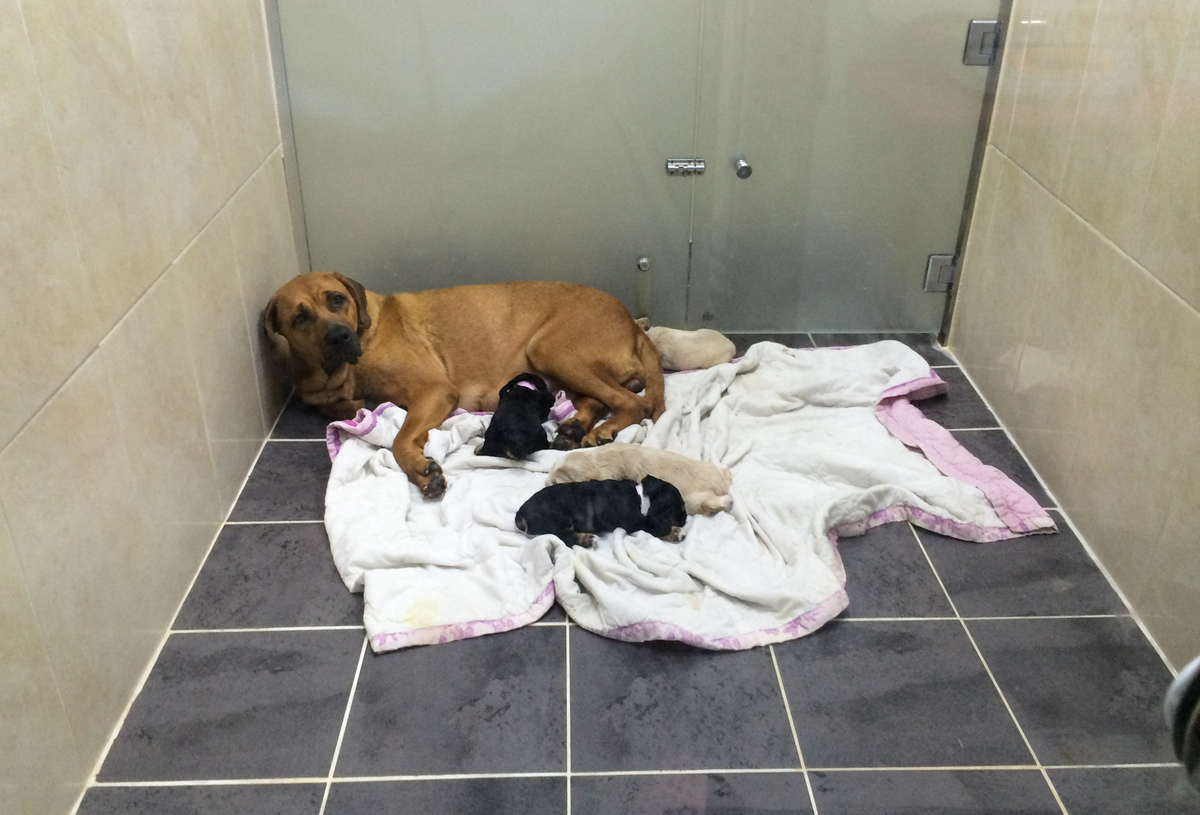 A litter of puppies created at Sooam Biotech. Though clones share the same genes, they aren't exact replicas; developmental changes have an effect on markings, for example.

"Hopefully we can get cloned puppies after 61 days," he says. That's how long a dog pregnancy usually lasts.

The next stop on the tour is a long, bright kennel room. Puppies paw at the glass doors of each stall — a Boston terrier bound for the United States, a black female pug, a couple of male Pomeranians and a pair of Yorkshire terriers headed for Ireland.

Some newborn cloned puppies are still with their surrogate mothers in another kennel downstairs, in the process of being weaned. Others are outside getting some exercise. All the animals look healthy and happy. But critics have some big concerns about this procedure.

For one thing, this cloning process works only about a third of the time. So, getting a cloned puppy entails a lot of attempts and a lot of miscarriages. And the process requires many dogs — some to provide the eggs, and others to serve as surrogates.

"I think you really need to think twice about it in terms of animal welfare," says Insoo Hyun, a bioethicist at Case Western Reserve University. "Dog owners should really be aware of the potential harm to dogs that could be produced during this process."

"The cloning process is imperfect. It doesn't completely reset the DNA to an embryonic state," Huyn says. "So depending on how imperfect that process is, you have different ailments that will befall the dog — many of them might die at an early age."

And even when the process works perfectly, the cloned animals aren't exact replicas of the originals. Environmental influences, including some that help determine when particular genes are turned on and off during development, play a role in how closely the resulting clone mimics the original dog.

"They may not even look like your beloved pet," Hyun says.

Hyun also worries that Hwang is using his dog-cloning services as a way to try to rehabilitate his career and eventually be allowed to return to doing research involving human cells.

"I'm a little bit wary of the idea that he's still trying to do research and publish in scientific journals," Hyun says. "And some have even suggested that over time, he may make a comeback in the human research arena. I just don't think someone like him can be trusted to follow the rules appropriately."

Although reputable scientists say Hwang committed fraud, he has always maintained that he did clone stem cells; during the tour Kim shows off what he claims is the original line of these cells.

Kim also says all cloned dogs born so far have been perfectly healthy — and almost always look and act a lot like the dogs they were cloned from. Kim also says Sooam Biotech takes good care of the donor and surrogate dogs, though he wouldn't say where the lab gets these animals or what happens to them after they are no longer needed.

Kim tells me the lab is using the cloning techniques its staff developed to clone dogs for other research — including creating animal models of Alzheimer's disease and diabetes, in hopes of finding treatments for the human illnesses.

Scientists at Sooam are also trying to save endangered species, Kim says, and even hope to one day re-create extinct ones — like the woolly mammoth.

In response to those who question the dog research, Kim says Sooam is just offering something that people want.

"Among the domestic animals that share a deep relationship with humans, you know, they say that dogs are a man's best friend," he says. "So there is a demand for it."