Accessibility links
Women Find A Fertility Test Isn't As Reliable As They'd Like : Shots - Health News It's hard to predict how quickly a woman's fertility will decline and if she'll be a good candidate for egg freezing. But doctors try to figure that out with something called an ovarian reserve test. 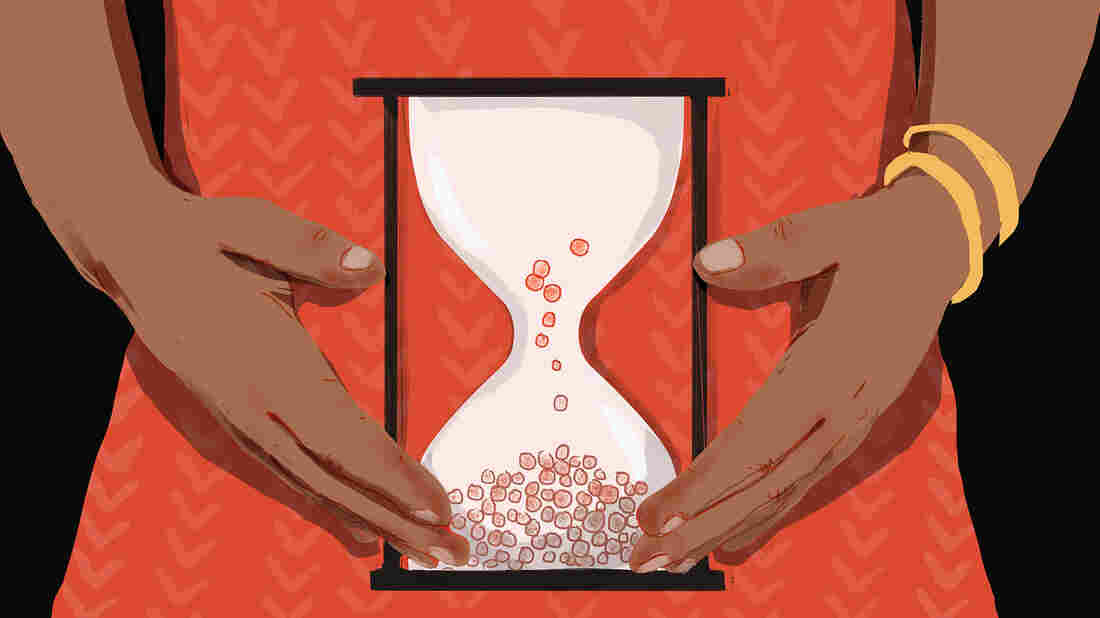 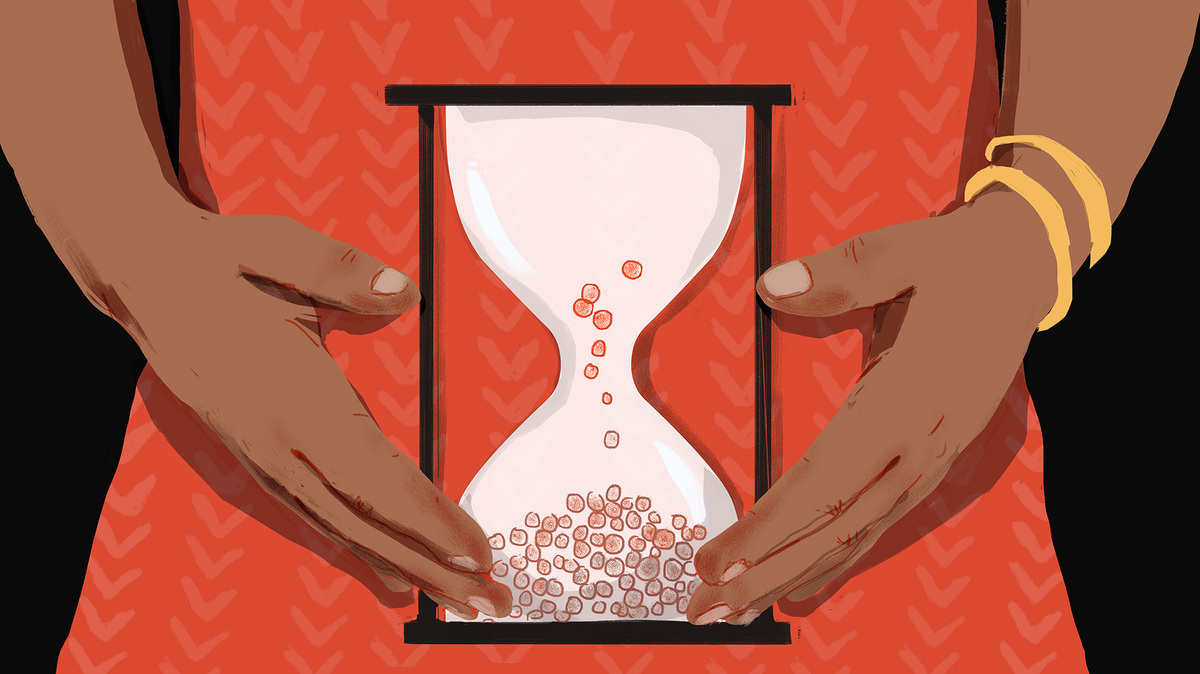 Women concerned about their fertility can use a test to help decide whether they should freeze their eggs now or whether they still have time to have a baby.

But this test, called an ovarian reserve test, is often ambiguous and can be misinterpreted. Some fertility specialists worry that many women will be misled by their results, leading some to feel pressured to freeze their eggs when they don't need to and others to miss their best window to do so.

A few months ago, I was in Samantha Margolis' kitchen in Washington, D.C., where she was getting ready to give herself an injection. In front of her were several small vials filled with hormones. Margolis was mixing the hormones with saline solution and then injecting them just below her belly button.

Margolis did these injections every day for 10 days to stimulate her ovaries to make several eggs grow at once. In a normal monthly cycle, just one egg grows and is released at ovulation, but flooding the ovaries with these hormones coaxes them to make more mature eggs.

At the end of the 10 days, Margolis had a medical procedure to retrieve the mature eggs so they could be frozen at Shady Grove Fertility Center. The idea behind egg freezing is that since the number of eggs and the quality of them decline in women over time, women can preserve eggs when they're younger to increase their chances of having a baby if they have a fertility issue in the future.

She also got the results of an ovarian reserve test.

Different fertility centers have different versions of this test, but every woman exploring the option of egg freezing has to take one so that doctors can figure out whether she is a good candidate for the procedure. At many fertility centers, the test involves measuring three different hormones in the blood that typically change dramatically in women between age 35 and menopause. There's also an ultrasound to count follicles, which is where eggs mature in the ovaries.

Doctors put all this information together, to get a rough picture of a woman's egg supply. Margolis' results didn't look good. When she asked her doctor whether she should freeze her eggs, "She said to me 'Samantha, I'm not an alarmist, but I would do this, and I would do it as soon as you can. I wouldn't wait.' "

Two cycles of hormones and $22,000 later, Margolis got just eight eggs to freeze. Doctors recommend having 15 to 20 eggs for the best chance of making a baby with them later through in vitro fertilization.

Margolis says she's glad she froze her eggs when she did. But, she says, "I wish that [this test] was at a certain age was part of your annual [gynecologic] exam. There is no question that if I would have had this test earlier and known what my count was that I would have done this years ago." Had she done the procedure earlier, she also might have gotten closer to the goal of 15 to 20 eggs for freezing.

Reproductive medicine specialists say ovarian reserve testing can be useful for women like Margolis who discover when they take it that their egg supply may be running low. "The ability to both test for your egg supply and at the same time do something about it is really amazing," says Dr. Benjamin Leader, a fertility diagnostics researcher and CEO of ReproSource, a fertility testing company in Woburn, Mass.

But fertility experts also worry that many women will be misled by their test results. "There are issues with the test, the reliability of the test," says Dr. Samantha Pfeifer, an associate professor at Weill Cornell Medical College and chairwoman of a committee at the American Society for Reproductive Medicine that guides doctors in her field.

Women are born with all of their eggs (some 1 million to 2 million total). One mature egg is typically released each month in the menstrual cycle. Meanwhile, other eggs are slowly dying.

Beginning around age 25, the number of eggs starts to decline a bit more swiftly, and then accelerates after 35 until menopause, when eggs are essentially gone. As the quantity of eggs declines, the quality of the remaining eggs is also deteriorating, which can also affect a woman's ability to conceive. (Egg quantity and quality are just a few of many different factors that can make it difficult for a couple to conceive.)

The ovarian reserve test was originally developed to measure egg supply in women who were struggling to get pregnant — not in women who wanted to freeze their eggs. Doctors realized that some of these women could benefit from ovarian stimulation to produce eggs to use in in vitro fertilization because they still had a lot of eggs left. Those women responded well to hormones — the same ones Samantha Margolis took in her own egg freezing process. (Women undergoing egg freezing and women doing IVF undergo the same ovarian stimulation process to make eggs — the difference is that the IVF patients usually use their eggs right away.)

In particular, researchers realized that measuring one hormone, called anti-Mullerian hormone, or AMH, in the blood seemed to help predict whether a woman's ovaries would respond well to the drugs. Higher AMH meant that a woman was likely to produce more eggs under stimulation, while lower levels usually yielded fewer eggs.

In March, the ASRM practice committee that Pfeifer chairs published a paper in the journal of Fertility and Sterility noting that "there is mounting evidence to support the use of AMH as a screening test for poor ovarian response." The paper also noted that the three other hormones fertility centers often check — FSH, estradiol and inhibin B — are only poor to fair measures of how a woman's ovaries will respond to stimulation or her ability to conceive.

Even though the AMH level may be one of the strongest tools doctors have to assess egg supply, it still can be difficult to interpret what it means, since the range of AMH levels in women of the same age can be huge. Age still is a very important predictor of fertility, but one recent study of about 17,000 women in the U.S. found that AMH levels are very unevenly distributed by age. And AMH may decline faster in some women than others.

Pfeifer says that overall, the ovarian reserve test is not that precise, and is just a snapshot of one moment in time. "These tests do not tell me how many eggs are left; they can generally give you a sense of are there a lot of eggs there, or fewer eggs remaining," she says. "But they're not really predictive of when someone is going to go through menopause or be able to achieve a pregnancy."

Studies have also shown that there can be a lot of variability in test results, even for the same samples from the same woman. Leader says that's because different labs have different methods and don't calibrate their results to the same clinical outcomes.

For example, Leader says, "When results from one lab are compared to another, a 'concerning' result may not be 'concerning' for a given condition, and, vice versa, a 'reassuring' result may not actually be 'reassuring.' " Leader says that the best way to interpret test results is to calibrate the numbers to the "gold standard definition for egg supply," which is the number of eggs retrieved after the ovaries have been stimulated with hormones. This is how his company ReproSource calibrates egg supply for its patients and clinicians.

Because of all the uncertainty in measuring egg supply in individual patients, Pfeifer says it's way too soon to be offering this test as part of regular gynecologic exams.

"I think that for some people this test is very helpful in guiding them in decision making, but for other people, it may not in and of itself direct them that accurately," she says.

People in the egg freezing business see it differently. Many of them say all women should get the test to be better informed about their fertility.

"There's no reason why we shouldn't be doing this test on an annual basis," says Jay Palumbo, a vice president at Eggbanxx in New York. It's a company that markets egg freezing with parties branded Let's Chill. Palumbo calls herself a "fertility matchmaker" because she helps women who want to freeze their eggs find doctors who will do it.

She says many of the women who call her looking for a doctor have gotten bad news from the test. "The egg freezing population — about 20 percent of them find out they have a fertility issue," she says. "And it's interesting to hopefully catch people early on in the process so hopefully that maybe, possibly they're able to avoid some of the heartache later on."

The heartache, as the fertility industry sees it, is having no eggs, or no good quality eggs, left when the time comes to try and get pregnant.

Many women, though, just won't get clear information from the test. That can make a major life decision like egg freezing more agonizing. You already have to weigh the cost — $8,000 to $30,000, depending how many rounds of hormones you have to do — and the possible side effects of the hormones, which include ovarian hyperstimulation syndrome. And then there's the fact that success rates for a live birth from frozen eggs are lower than for fresh eggs.

The test can be dangerous in other ways, according to Joann Galst, a psychologist in New York City who specializes in women's fertility issues. Measuring your fertility can be like a Pandora's box. "This is a really personal field in terms of how people feel about themselves as beings and their future life goals and parenting, Galst says. "It hits them in a very profound deep way to get any information that there may be a problem in this area."

That's why every woman getting the test should ensure they use a lab that gives meaningful results and find a doctor or nurse trained to interpret these results or women may get an inaccurate picture of their fertility, according to Leader of ReproSource.

Pfeifer of Weill Cornell says that as testing improves, doctors will be able to better guide patients to the right decision.

"Ideally we'd love to know how can we predict who should freeze their eggs, for example, or who should try and get pregnant sooner; who should do something sooner because their fertility decline faster than expected," says Pfeifer. "And if we can say these people don't have to freeze their eggs because they should have no difficulty getting pregnant well into their late 30s — well, that'd be great to know that."

But for now, Pfeifer says, this test isn't there.