Accessibility links
Who's Responsible for Your Uber Driver's Health Coverage? : Shots - Health News The temps, contractors and freelancers who work in the gig economy don't typically receive health insurance through the companies that make use of their services. But some firms are looking to help. 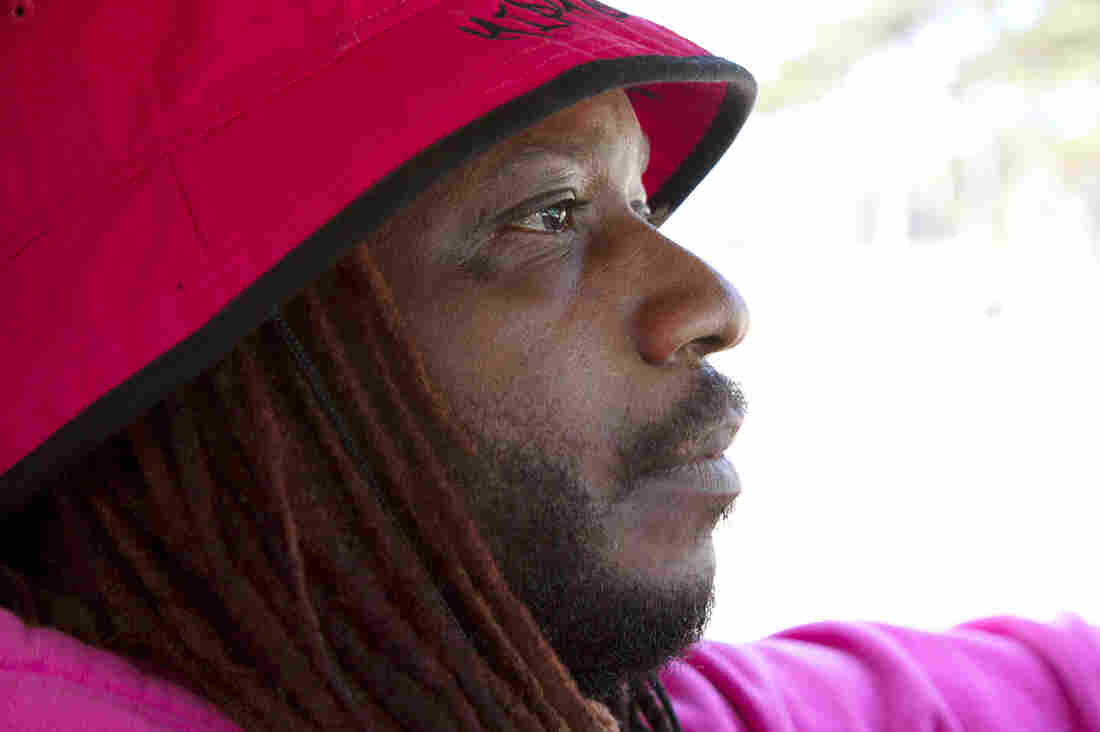 Deco Carter, who drives mostly for Lyft, a ride-hailing service, has been involved in two auto accidents that left him unable to work while his car was being repaired. Alan Toth/KQED hide caption 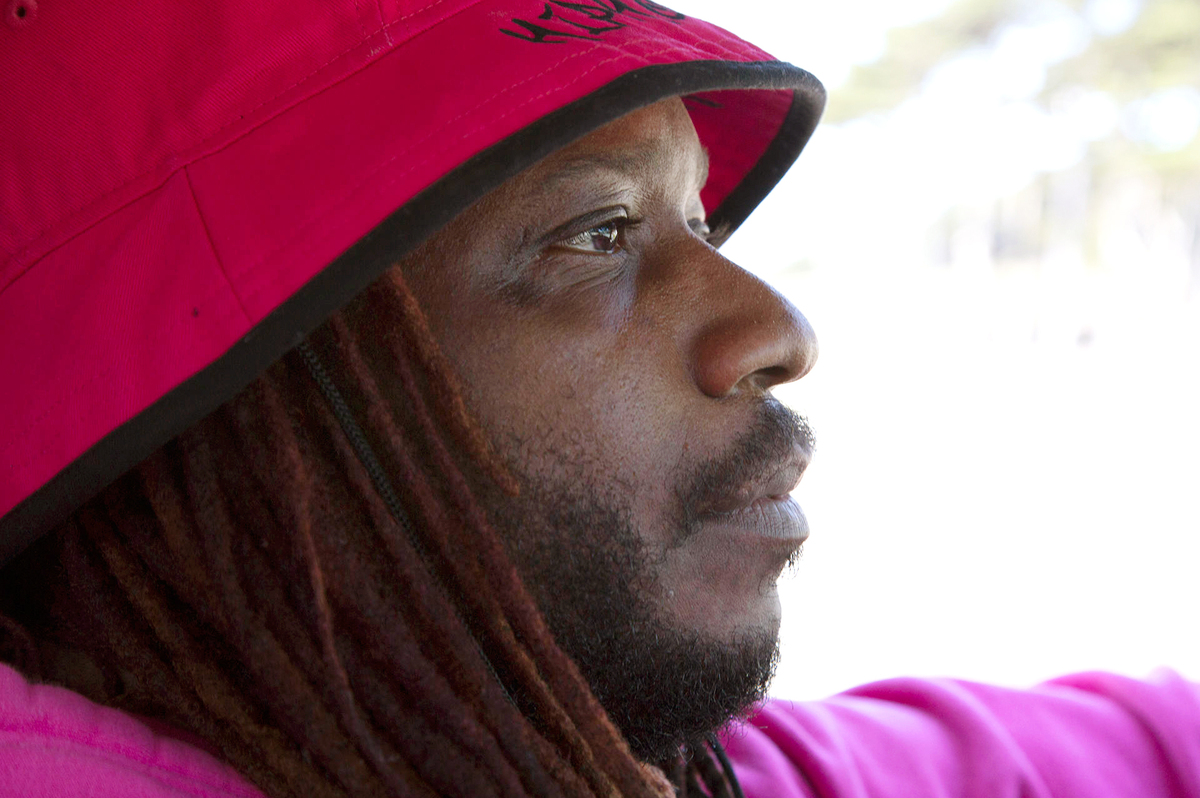 Deco Carter, who drives mostly for Lyft, a ride-hailing service, has been involved in two auto accidents that left him unable to work while his car was being repaired.

For six months, Eliza Kinrose worked about 10 hours a week delivering everything from cupcakes to art supplies to strangers' homes.

Shortly after quitting her steady job as a recruiter, Kinrose, 29, signed up to work for a new San Francisco-based mobile delivery service called Postmates. She made about $15 an hour for six months, which was just enough to scrape by until she launched a yoga business.

Postmates is just one of the companies taking part in the rapidly growing gig economy. The companies connect people seeking services with sellers of those services in a few minutes' time.

The temps, contractors and freelancers who work in the gig economy don't typically receive health insurance through the companies that make use of their services. The workers could buy insurance on the health exchanges created under Obamacare. But some are looking for alternatives.

One evening, Kinrose received an email from Postmates about an intriguing perk to help her find health coverage, a service from a company called Stride Health.

Stride Health is a San Francisco-based startup that makes tailored recommendations about health plans for people in the market for coverage and serves as an insurance broker licensed to sell plans in 39 states.

The company also offers Web and mobile services to assist customers once they've purchased a health plan, including premium payment reminders and guidance on whether they qualify for subsidies. Stride Health also shows customers how much different health conditions, like asthma or heart disease, would affect their out of pocket costs.

Stride Health is one of many startups taking advantage of new opportunities created by the Affordable Care Act. It may be unique, however, in targeting gig economy workers like Kinrose.

Uber, Postmates and Taskrabbit, three of the largest companies in the gig economy market promote Stride Health's service to their workers.

Stride Health CEO Noah Lang says it's a sign of changing times. The companies, he said, "want to make sure people don't end up in a tough spot by forgoing coverage."

But critics of the gig economy say Stride Health is a merely a Band-Aid, leaving workers on the hook to pay for their own health insurance.

"When we have a jobs-based social welfare system, some people get a combination of health care, disability and more," said Ken Jacobs, chair of the Labor Center at University of California, Berkeley, who specializes in health care coverage and public policy. "In a world where people are operating separately from that, the safety net goes away."

How Big Is The Gig Economy, Really?

In cities across the United States, anyone with a smartphone can order a meal from Postmates, a ride to work via Lyft or Uber, groceries on Instacart or a home cleaning on Handy. These services are so pervasive, with billions of dollars in total sales as a group, that it's hard to believe they only sprung up in the past five years. 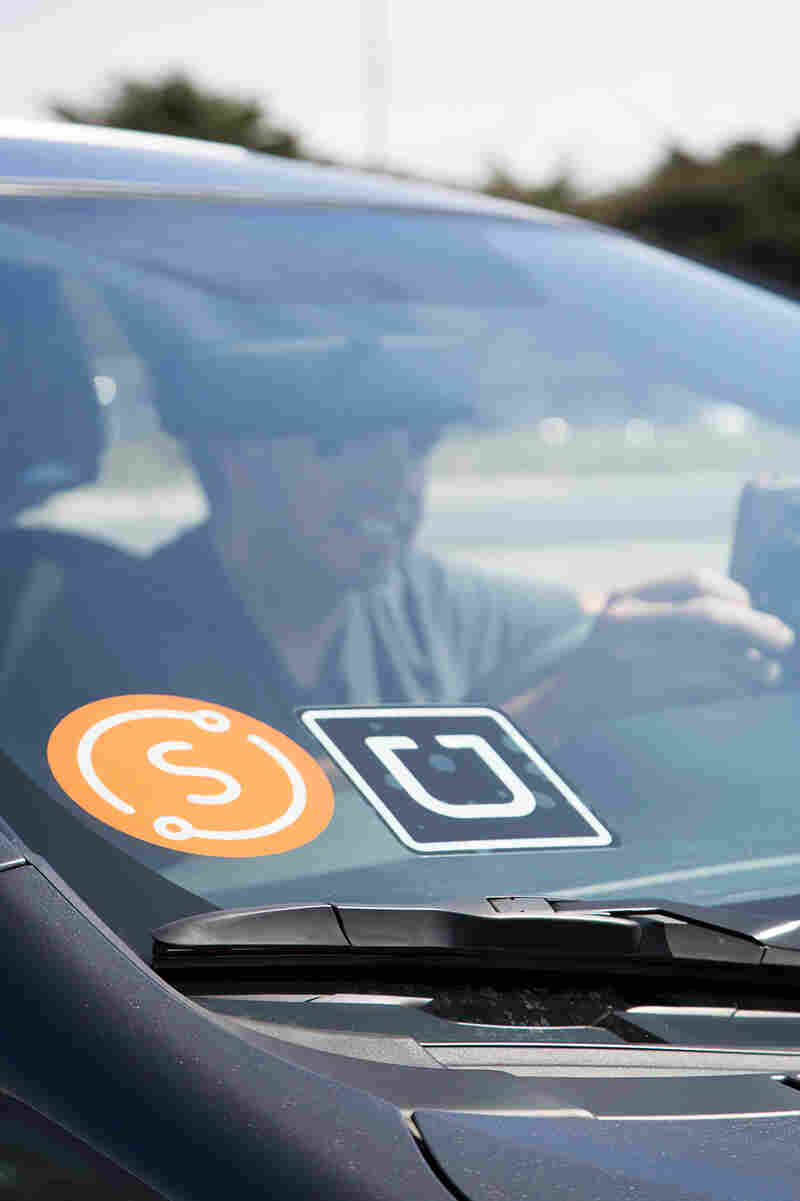 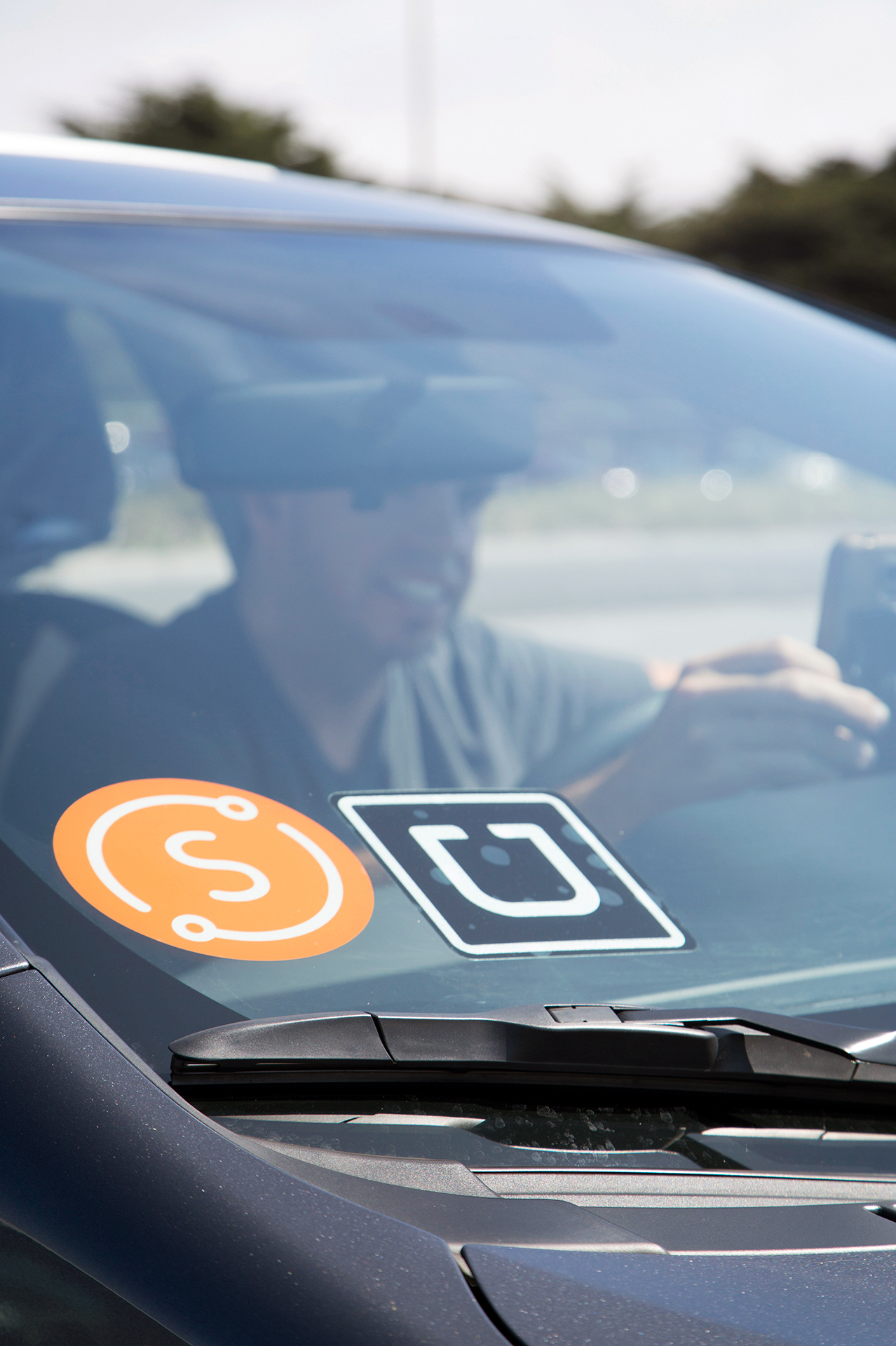 Rick Warren, drives for multiple companies, including Sidecar and Lyft.

While the on-demand economy has been hailed as the next big thing, labor economists say it still hasn't made much of a dent in the overall U.S. economy. The most recent data suggest that Americans are no more likely to be self-employed than a decade ago.

In 2014, Uber collaborated with Princeton University economist Alan Kreuger on a report that determined the company had 160,000 "driver partners" in the United States. By contrast, the Bureau of Labor Statistics estimated that there were some 230,000 taxi-drivers in the U.S. in 2012.

Uber may not show up in national data just yet, but it is having an outsize impact in politics and popular culture. Even the presidential candidates are taking a side: While Hillary Clinton says she wants to "crack down" on sharing economy abuses of workers, Jeb Bush was recently spotted hailing an Uber ride in San Francisco.

By targeting the gig economy, Stride Health has waded into an ongoing debate among policymakers, investors and litigators. Should on-demand companies treat their workers as employees and pay their expenses, as well as provide health insurance and other benefits?

Uber, the San Francisco-based company that uses a smartphone app to link people needing car rides with drivers for hire, is facing a class action lawsuit. In the suit, three Uber drivers are collectively challenging the company on whether they should be considered employees under the law instead of independent contractors, as the company now classifies them.

In June, the California Labor Commission ruled against Uber in determining that an ex-driver was entitled to reimbursement for business expenses.

"Many drivers have included on their list of issues that they are on their own for health insurance," said Shannon Liss-Riordan, of Boston, the lead plaintiff attorney in the class action lawsuit against Uber. "These drivers are left in the cold."

How the Uber case ends up could have national implications. If the company loses and has to reclassify its drivers from independent contractors to employees, Uber would have to pay for things like their expenses, and provide benefits to full-time drivers. One recent estimate is that Uber would need to pay $209 million a year to reclassify its drivers to employees — and that's just in California.

Not everyone believes that Uber and the rest have left anyone out in the cold.

For one thing, the Affordable Care Act has relieved the burden for many drivers, as it provides subsidies for low-income people to buy health insurance independently. Uber's CEO Travis Kalanick reportedly referred to the ACA as "huge" for the gig economy.

Some policymakers see a middle ground, where workers have some added protections but aren't full employees. One idea is a new worker category called a "dependent contractor," which is used in Germany, Canada and other countries, but not in the United States.

Sen. Mark Warner, D-Va., has spent more than a year researching the on-demand economy. He has proposed olive branches in the legal wars, including the dependent-contractor model. He has also proposed marketplaces similar to those created by the Affordable Care Act for other key benefits, including workers' compensation.

Some critics of Uber have painted the company's top executives as indifferent to the plight of workers. But by providing services to workers, these companies risk adding fuel to the legal argument that they should be employees and not independent contractors.

The I.R.S. has about 20 factors that it takes into account when determining a worker classification. One important distinction is how much control an employer has over the work that's being done, but it's not always clear what control means.

"Essentially, this [partnership with Stride Health] is about how these workers can get health care without exposing Uber and the rest to liability or responsibility," said UC Berkeley's Jacobs.

Stride Health's Lang doesn't totally disagree, but paints the partnership in a more positive light. Uber and other gig economy companies care about growing and maintaining their labor pool, he explained. "But at the same time, they have to minimize their risks by not stepping over any of the lines."

According to Lang, about 40 percent of gig economy workers surveyed by Stride Health said they would "not have gotten coverage otherwise."

A spokeswoman from Uber said "the [Stride] experience has been customized for Uber to be as quick and seamless as possible." A Taskrabbit representative said the company "vetted other options" but ultimately opted to partner with Stride as the "thoughtful approach for independent contractors."

Postmates declined to comment on its reasons for partnering with Stride.

Will On-Demand Companies Ever Provide Health Insurance to Workers?

Critics of the on-demand economy say that Uber and the rest are the latest in a long line of companies that use fancy wordplay and questionable tactics to avoid protecting workers. These legal battles go back decades, with FedEx most recently settling a lawsuit with drivers who claimed they had been misclassified.

"Uber tries to argue that it's not in the car service industry; it's a technology platform," said plaintiff's lawyer Liss-Riordan in an interview. "The court rejected that. Some folks are working part-time for other jobs. Others have not had health insurance in a long time and need extra help navigating their options."

Some on-demand economy companies are now taking steps to reclassify their workers as employees, including Doctor on Demand, a company that connects people with doctors online in a matter of minutes, as well as mobile delivery services Instacart and Shyp.

But Lang is doubtful that this will trigger a shift for the on-demand economy at large. As Lang points out, Uber's labor pool is much larger than an Instarcart or Shyp and its workers are not specialized like Doctor on Demand's physicians – all they need is a drivers' license. "I give Shyp and Instacart kudos, of course," he said, "but it's also opportunistic for them."

A change in federal law or a landmark Supreme Court ruling might force Uber, Lyft and others to treat their workers as employees. This wouldn't mean that every driver would receive employee-sponsored health insurance overnight, however.

Deco Carter, a Bay Area-based Lyft driver, said he "knew the risks" when he joined the growing ranks of gig economy workers. He has been involved in two auto accidents, and lacked income for several weeks afterward while his car was being fixed.

He said he hopes that Lyft would consider extending benefits to drivers, particularly to those who pull full-time hours. Lyft isn't currently working with Stride Health, but its drivers have access to an alternative service called the eHealth marketplace. A spokeswoman denied requests from KQED for an interview.

"I really didn't have anything to fall back on," he said. "If it wasn't for my fiancee, I don't know what I would have done."

A version of this story first ran on KQED's Future of You blog, which explores the intersection of emerging technologies, medicine and health care. Chrissy Farr, the editor and host of the blog, is on Twitter: @chrissyfarr