Accessibility links
Know The Signs: For Some, Post-Pregnancy Is Anything But Magical : Shots - Health News Nine years ago, Paige and Bjorn Bellenbaum were excited to have their first child. But Paige quickly began to struggle with postpartum depression — and neither of them realized she needed help. 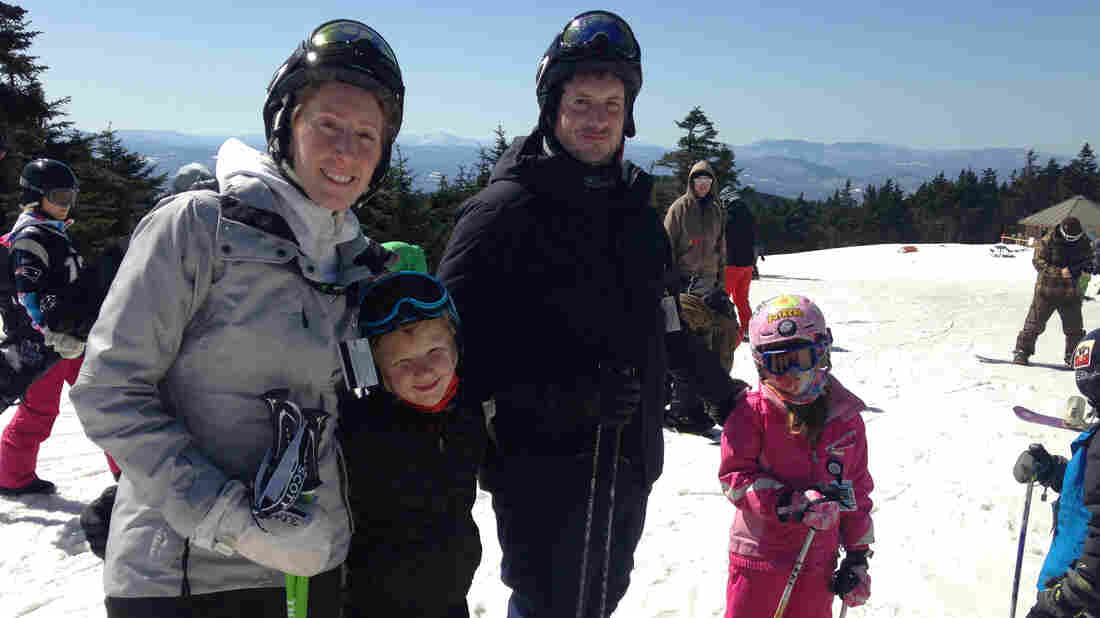 Paige and Bjorn Bellenbaum pose while on a skiing trip with their two kids, Max, 9, and Ella, 7. After Paige sought help for what she learned was postpartum depression, the Bellenbaums say they feel stronger now. Courtesy of the Bellenbaum family hide caption 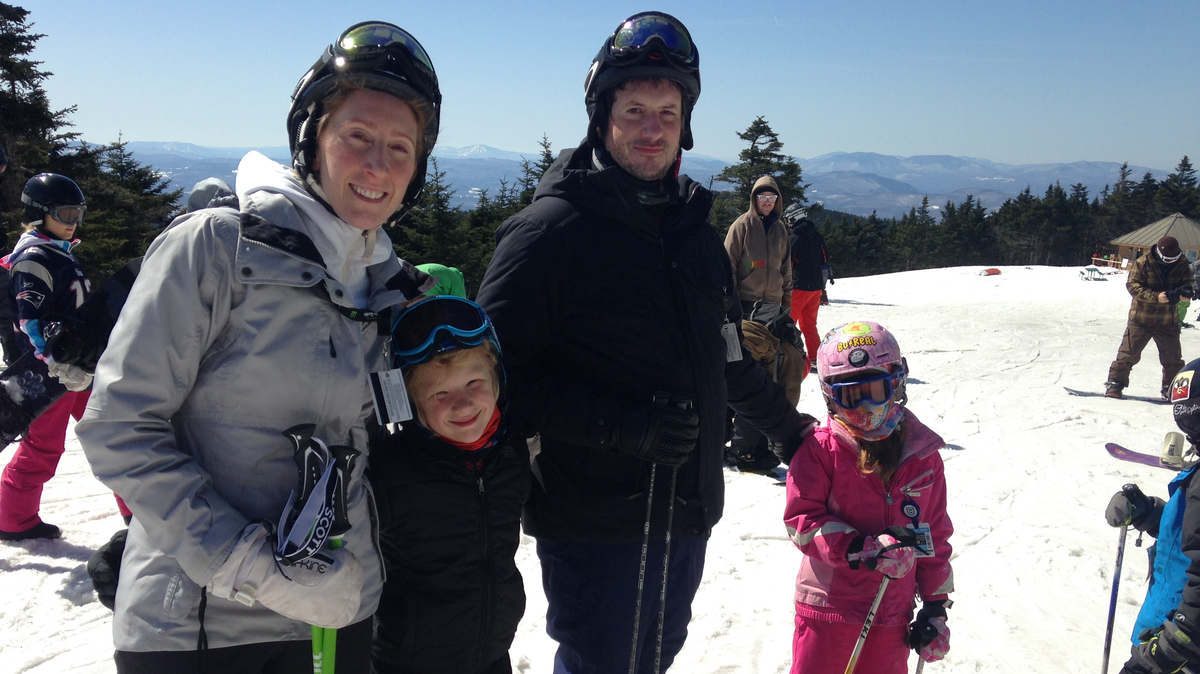 Paige and Bjorn Bellenbaum pose while on a skiing trip with their two kids, Max, 9, and Ella, 7. After Paige sought help for what she learned was postpartum depression, the Bellenbaums say they feel stronger now.

Courtesy of the Bellenbaum family

The definition of postpartum depression is broad. The symptoms can range anywhere from feeling exhausted and disconnected from your baby to paranoia that someone else might hurt your child or, even worse, that you yourself might do your baby harm.

While this wide-ranging spectrum makes it hard to diagnose, the CDC says between 8 percent and 19 percent of women suffer from postpartum depression.

A decade ago, Brooke Shields kicked off a national conversation when she talked publicly about her own depression after the birth of her first child.

And it's still news every time a woman in the public eye talks about it. Drew Barrymore wrote about her experience in a new memoir, and actress Hayden Panettiere recently checked into a treatment center for postpartum depression.

Since then, the stigma around postpartum depression has lessened. But when Paige Bellenbaum and her husband, Bjorn Bellenbaum, had their first son, now 9, there was not as much awareness.

This week on For the Record: The battle with postpartum depression. Click on the audio link on this page to listen to the full conversation.

A few months after an easy conception, Paige and Bjorn were excited to find out they were having a boy. And while Paige stressed out a lot during the pregnancy, she didn't overthink what would come after giving birth.

I thought ... that having a child was gonna be a magical, wonderful and beautiful experience.

"What I thought, which is what I think most women think, unless told otherwise, that having a child was going to be a magical, wonderful and beautiful experience," she says. "But I think Bjorn was actually more of the practical person who was thinking about the aftermath more than I was."

In fact, Paige says, the birth was terrible.

"It was the most traumatic physical experience I've ever had in my life."

The one thing that softened it, she says, was Bjorn's opposite reaction.

"It was incredible," Bjorn says. "It always makes me sad, you know, to hear your side of it, that it was such a traumatic thing."

This was the beginning of the gaping hole that would develop between Paige and Bjorn and the vastly different way they experienced early parenthood.

Paige vividly recalls, during the first few weeks, wanting to feel that unconditional love that had been described to her but feeling only pain and emptiness after the physical trauma.

"I found myself thinking in those first few weeks, 'I wish I could stuff him back up there,' " she says. "I feel like he's safer there than he is out here."

Bjorn took a week off from work after the baby was born, but even then he was still on email and not completely present. They didn't want any family to come in to help, so after that first week, Paige was all alone with the baby. And it started to overwhelm her.

"I kept thinking there was always something wrong," she says. "He was sleeping too much. ... He's not eating enough. ... And I was always trying to convince Bjorn in the beginning that there were problems and we needed to go to the doctor and take care of it."

Bjorn Bellenbaum, on why he didn't realize his wife needed help

Bjorn says it took him time to realize Paige needed help because he lacked perspective.

"I didn't know what was normal, what was not normal," he says. "It was clear that Paige was really nervous, but that also seemed not uncommon."

And he had his own stressors of fatherhood and finances that intensified the disconnect with his wife.

All the while, Paige's depression got worse.

"I did not feel any love attraction for my son," she says, and she would sit crying throughout the day.

Paige even found herself staring into the medicine cabinet and contemplating suicide.

It's worth noting that she's a social worker and part of her job is to be able to spot signs of depression in other people.

"Even I, as a trained clinician, was unable to notice the symptoms," she says, "because I was so far gone."

Then, a turning point came for Paige when she took 5-month-old Max for a walk.

"Everything around me felt gray," she recalls. "I noticed that I just, I didn't know who I was. I was walking toward the corner with Max in the stroller, and I looked to the right and I saw a bus coming. And I looked at the bus and I had this impulse out of nowhere to throw myself and Max in front of the bus and just end it. ... As the bus passed, I remember looking at my reflection in the windows of the bus and the faces looking back at me, but seeing my face, and being like, 'Who is that person?' ... I had to do something to save myself and to save my son."

So she took a cab to Manhattan's Payne Whitney Psychiatric Clinic, where she was diagnosed with severe postpartum depression. A team of medical professionals suggested she get on medication immediately.

She did, and eventually she got better. The darkness lifted, and she started to see her baby boy in a different way.

Then, less than a year later, Paige got pregnant again. It wasn't planned, and she didn't know if she could go through with it again. 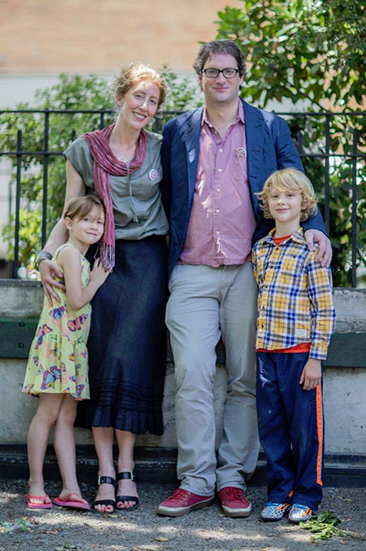 When Paige and Bjorn Bellenbaum had their second child, they knew the symptoms of postpartum depression — and were able to push back against it. Courtesy of the Bellenbaum family hide caption

"That was a big blow," she says. "And I considered not having the baby. I remember one afternoon ... [Bjorn] looking at me and saying 'I love you, I'll do whatever you want, I just don't want to lose you.' And that I will never forget. Because I knew in that moment that I didn't want to lose you, either, and that we were going to figure out a way to do this together."

They had a girl, and everything was different this time. They knew the signs of postpartum depression and they knew how to push back, but only because they had been there before.

Paige thought if more people knew what signs to look for, more moms could get help earlier. Last year, she helped write a new law in New York state aimed at educating more families on symptoms of maternal depression. It also gives pediatricians a process to screen and refer new mothers who might be struggling.

Postpartum depression can pull some couples apart, and they never find their way back. Paige and Bjorn did, and they say they're stronger for it. Their daughter Ella is rambunctious, they say, and Max is the sensitive one.