Accessibility links
Scaring People to Improve Health Works, But Can Have Downsides : Shots - Health News Fear campaigns can motivate people to quit smoking or eat less. But fearmongering can go too far. When is scaring for health's sake acceptable, and when is it distasteful?

Scaring People Can Make Them Healthier, But It Isn't Always The Way To Go

Scaring People Can Make Them Healthier, But It Isn't Always The Way To Go 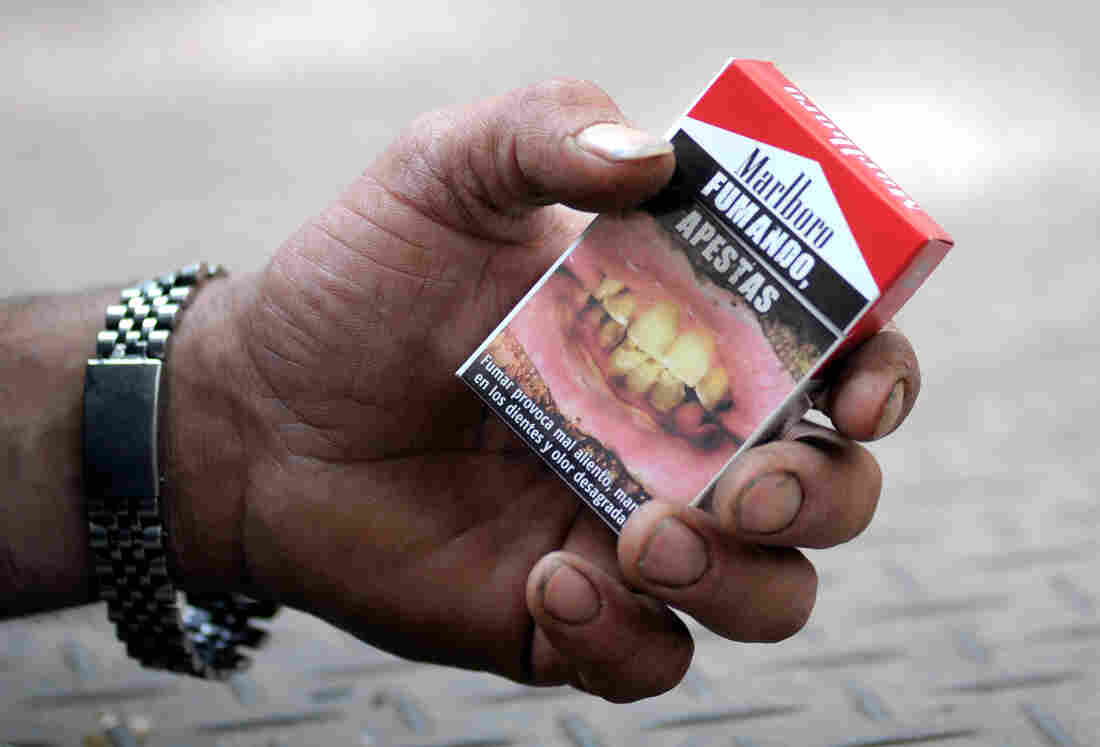 "Smoking, you stink," reads a cigarette package in Spanish that was used in an anti-smoking campaign in Uruguay. Matilde Campodonico/AP hide caption 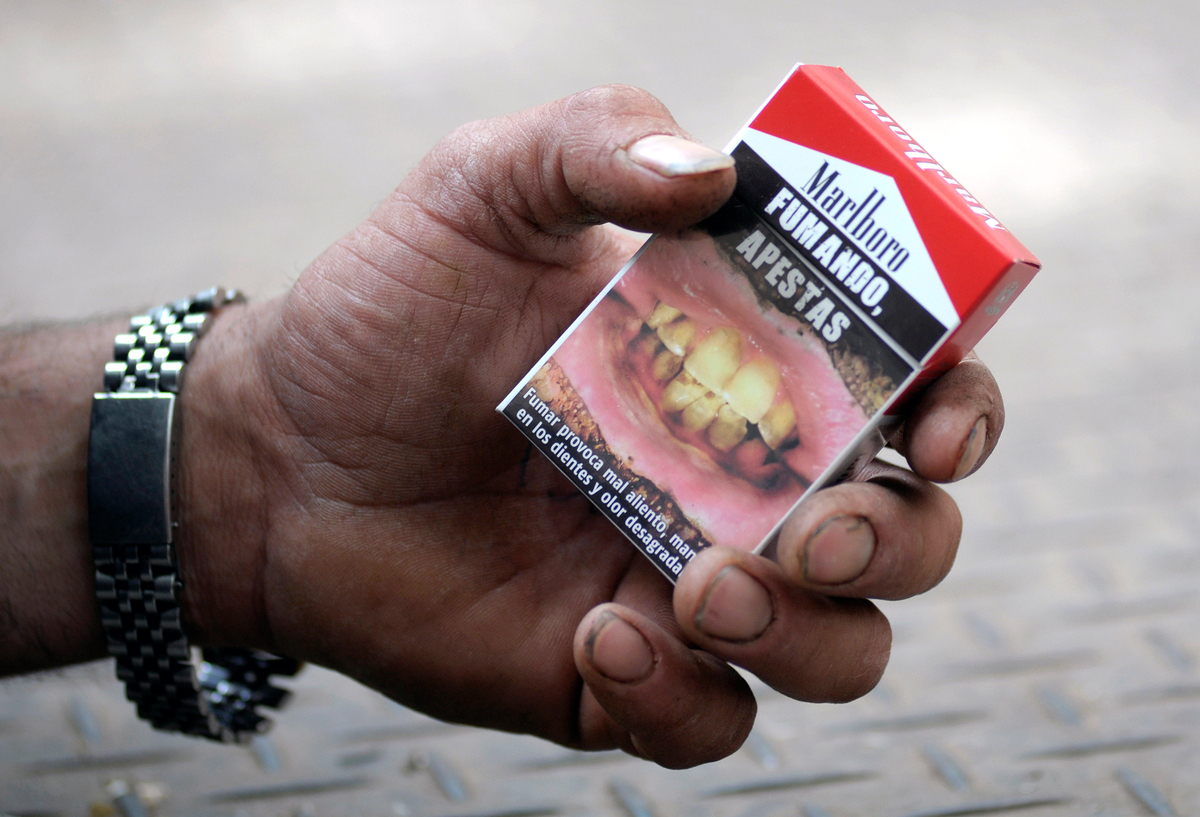 "Smoking, you stink," reads a cigarette package in Spanish that was used in an anti-smoking campaign in Uruguay.

The use of fear in public health campaigns has been controversial for decades. A campaign with gruesome photos of a person dying of lung cancer to combat smoking might make people think twice about lighting up. But opponents would argue that the photos are too visceral, along with being morally objectionable.

Fear-based campaigns are indeed effective at changing both attitudes and behavior, according to a review of more than a half-century of research. But that effectiveness isn't the only thing to consider when deciding whether to use fear-based appeals, researchers say.

The findings were published in the American Psychological Association's Psychological Bulletin, where researchers conducted a meta-analysis of 127 studies involving more than 27,000 people. The study authors found few situations where fear-infused appeals were not effective and "no identified circumstances under which they backfire," the authors wrote in the study.

Past research on this topic is vast and sometimes contradictory, says Dolores Albarracin, senior author of the study and a professor of psychology and business at the University of Illinois, Urbana-Champaign, in an email. But Albarracin and her colleagues found that fear appeals are effective overall — even more so when appeals are aimed at women, directed at one-time behaviors like getting a flu shot and combined with recommended solutions.

"It's easier to enact a one-time behavior like getting the flu shot but hard to exercise as recommended," Albarracin says. And women appear, on average, to be more anxious, making them more sensitive to fear appeals, Albarracin says.

Fear focuses a person's attention on the message and the problem, as well as a search for solutions, Albarracin says. "So it can motivate people to agree that they should protect themselves from the threat."

Yet some public health experts caution that even though we know that fear is effective, that doesn't always mean it should be used. In an article published in May in the journal Health Affairs, Amy Fairchild and Ronald Bayer of Columbia University's Mailman School of Public Health looked at New York City's use of fear-based appeals in combatting tobacco use, obesity and HIV infection.

"We were really trying to understand the circumstances under which fear was acceptable and under which fear became very distasteful," says Fairchild, a professor of sociomedical sciences. "And a lot of it hinged on social norms."

"Public health has successfully de-normalized smoking," Fairchild says, "but in the case of HIV, there was great concern that in fact you weren't de-normalizing a behavior; you were stigmatizing a population that was already suffering from the burdens of stigma."

"When you look at public health debates, the metric is typically, does it work?" says Bayer, professor and co-chairman of the Center for the History and Ethics of Public Health. "People very rarely are willing to say, 'Yes, it works, but we shouldn't do it anyway for this XY reason.' " But that is, in fact, the conversation that public health officials should have about using fear in campaigns, Bayer says.

Public health officials need to calculate ahead of time the benefits and drawbacks of using fear as part of a campaign and then be ready for controversy if they go ahead with it, Bayer says. But the decision shouldn't be based solely on what is most effective, he says, without taking into account the "human toll."

Bayer suggests an example: What if research showed that making overweight and obese people feel really terrible about themselves was a surefire way to make them lose weight? "Do you want to do that?" Bayer says. "I mean, even if it works ... everything that's effective is not acceptable. And making that determination is really a matter of a kind of wisdom and a kind of — it's a moral calculus. And we think that public health officials should become more comfortable in acknowledging that there's a moral calculus involved."

If public health officials think a message will cause panic and they have no way of controlling the threat, Albarracin says it makes little sense to deliver that message. "We are looking at situations in which there is a threat and a recommended behavior," Albarracin says, "rather than simply instilling panic in the population."

If a decision is made to use fear-based appeals, Albarracin says there are reasons against making the messaging too extreme. It can discourage the audience, she says, setting too high a bar. And while fear-based appeals don't usually backfire, when they do, Albarracin says it may be owing to an overly intense level of fear. "When the facts are too extreme in an attempt to induce fear, they are just not believable and cast doubt on the whole enterprise," she says.

Fear goes only so far. "Fear appeals can produce some movement, but long-term changes to behavior patterns are often produced by changes in skills," Albarracin says, offering the example of smokers. People don't continue to smoke because they are immune from fearing the consequences but rather because they don't know how to stop or can't.

"So inducing fear will be minimally useful relative to offering support, resources, teaching skills and techniques, or prescribing smoking-cessation aids like the nicotine patch," Albarracin says.