Accessibility links
A Gym Helps California Tribe Fight High Rates Of Diabetes : Shots - Health News The tribal health clinic in Lakeport, Calif., has a gym where patients of all ages with prediabetes get free fitness training, along with diet advice. The goal: Stop diabetes before it starts.

Tribal Clinic Deploys A Gym To Fend Off Diabetes

Tribal Clinic Deploys A Gym To Fend Off Diabetes 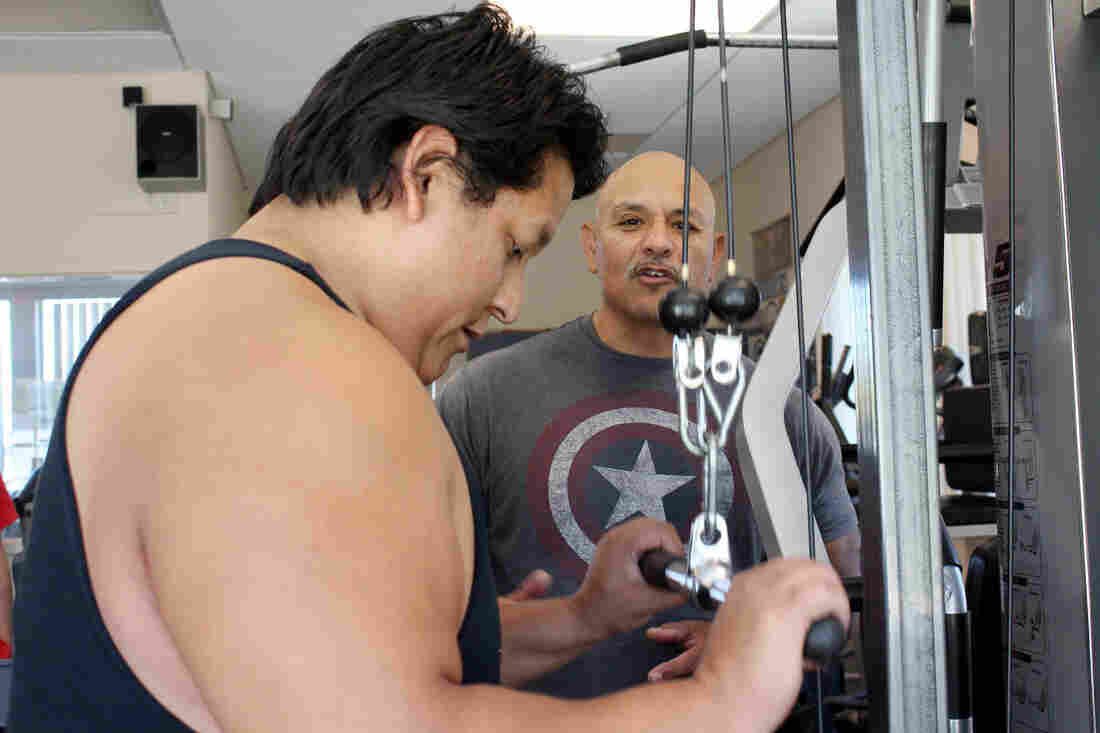 Jorje Mendez has lost more than 45 pounds through weightlifting and other lifestyle changes. Trainer Johnny Gonzales, right, helps prediabetic patients at the gym he set up at the Lake County Tribal Health Clinic in California. Farida Jhabvala Romero/KQED hide caption 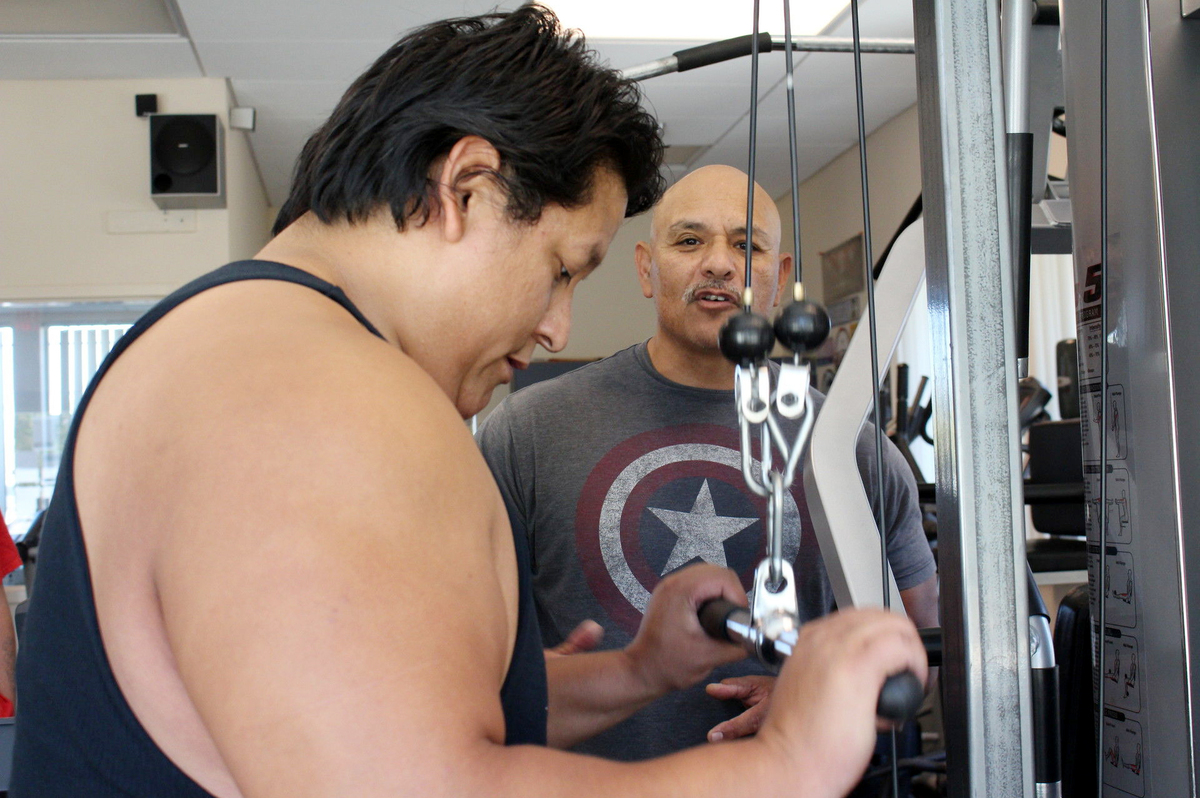 Jorje Mendez has lost more than 45 pounds through weightlifting and other lifestyle changes. Trainer Johnny Gonzales, right, helps prediabetic patients at the gym he set up at the Lake County Tribal Health Clinic in California.

Johnny Gonzales kneels next to his client, Jorje Mendez, who is struggling through the last set of pushups at the gym.

"Give me eight of them!" says Gonzales. "Be strict. This is where all the gains are made, right here. If you can do this, you can do anything!"

It's a pretty typical gym in an atypical setting. Gonzales works with patients of the Lake County Tribal Health Clinic, in Lakeport, Calif., and the gym is within the clinic itself.

Patients diagnosed with prediabetes who enroll in a program to lose weight are eligible to work with Gonzales — free of charge.

The Northern California clinic, which targets members of the six local Pomo tribes in the county, also offers classes on healthy eating and other lifestyle changes that can reduce the risk of diabetes.

Mendez, an accountant and father of five, was a cross-country champion at Clear Lake High School, but in the 15 years since has settled into a more sedentary lifestyle that involved "eating a lot — and [drinking] a lot of alcohol," he says. His weight ballooned to 300 lbs.

He decided to join the clinic's program after he was diagnosed as prediabetic. Grueling sessions with Gonzales three times a week have helped him lose over 45 lbs.

"I feel better now," says Mendez. "Other places, you've got to pay a fortune; I don't have that. So I'm blessed to come here."

Access to this gym and Gonzales' training sessions are game changers for patients like Mendez, who wouldn't be able to afford it otherwise. About 25 percent of the population lives below the federal poverty level in Lake County, and the median household income of $36,548 is much lower than California's statewide average.

The clinic's local efforts target an illness that's expanding rapidly among Native Americans, who are twice as likely as non-Hispanic whites to be diagnosed with diabetes, according to the Indian Health Service.

Particularly alarming is the impact of the disease on Native American young people ages 10 to 19. Statistics show those children and teens are nine times more likely to be diagnosed with Type 2 diabetes than non-Hispanic white kids.

Gonzales, who has worked with the Lake County Tribal Health Consortium since 2002, says the problem requires immediate attention. 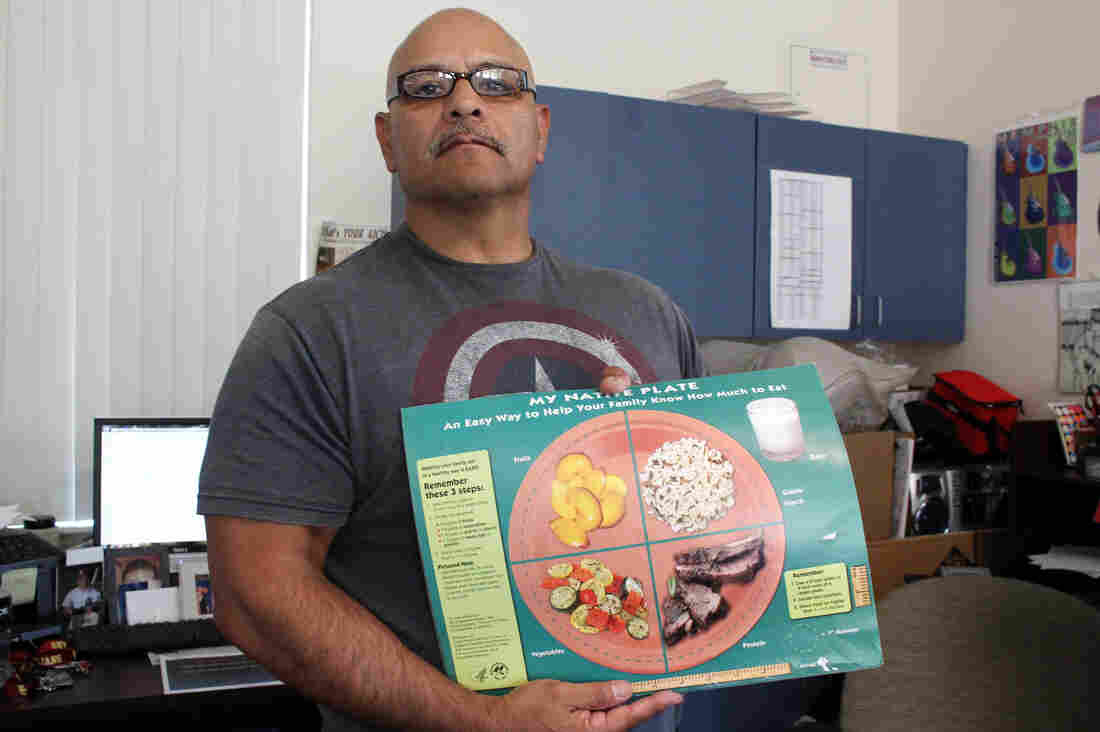 Gonzales shows off a food guide for patients in the clinic's diabetes prevention program. He tells clients to stay away from processed foods and "get off the couch." Farida Jhabvala Romero/KQED hide caption 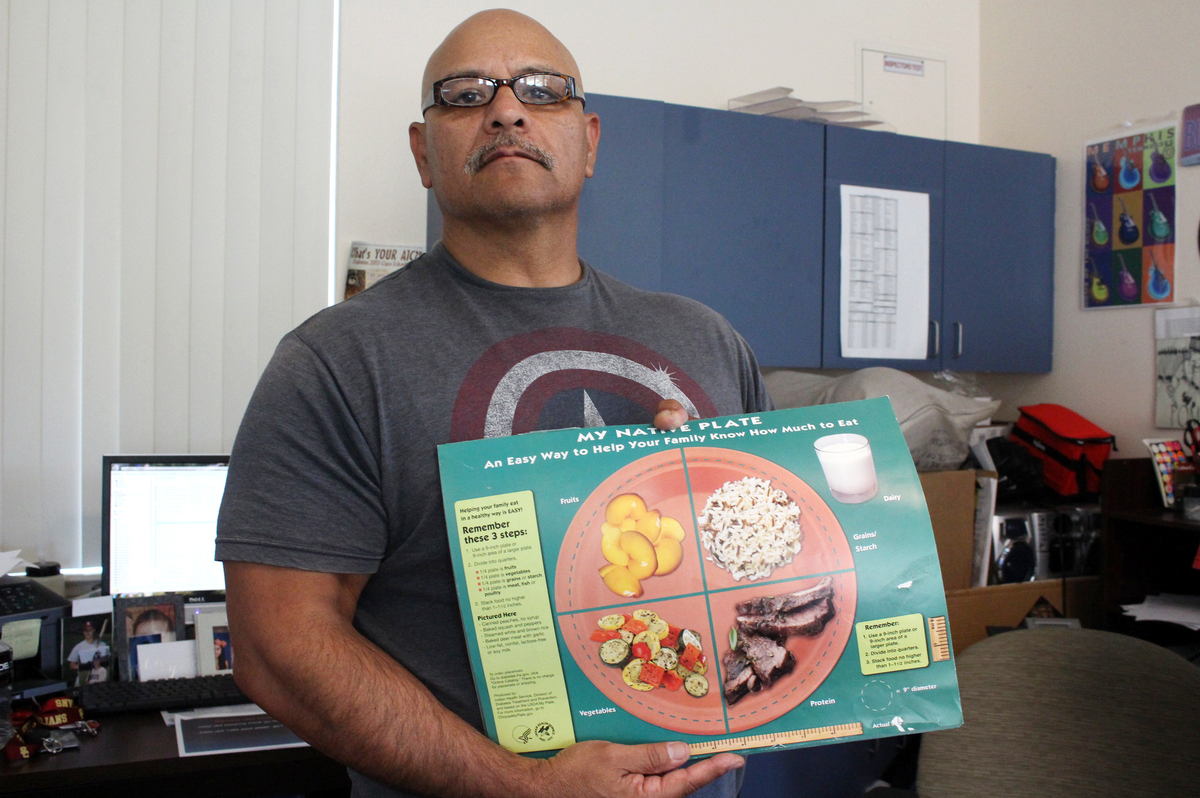 Gonzales shows off a food guide for patients in the clinic's diabetes prevention program. He tells clients to stay away from processed foods and "get off the couch."

"We are seeing it. We have kids that are 12 years old that weigh 240, 250," says Gonzales. "So they are candidates for diabetes. When you see a 12-year-old kid that is prediabetic, that is pretty sad. A lot of it is lack of education to that kid — or their parents just don't know."

Gonzales, a former Marine, says Native American communities in Lake County face challenges that make them susceptible to diabetes. He has witnessed how a poor diet and lack of physical activity take a toll on people's bodies.

"A lot of aching and pains weren't due to injuries," he says of clients living at Big Valley Rancheria, one of the local Pomo reservations. "It's because they were inactive. Their challenge is trying to eat healthy. On this reservation and some of the other reservations, it's not the healthiest food."

Even with those challenges, Gonzales remains evangelical about the healing powers of physical activity. It's a deep-seated belief stemming from personal experience after he hurt his back while working as a welder. Doctors told him he couldn't do construction work anymore; they recommended surgery. At the time, Gonzales balked at the procedure and chose instead to swim and exercise to strengthen his back.

"I noticed that when I was active I didn't hurt nearly as bad, but when I wasn't active I hurt all the time," says Gonzales. "I didn't want to depend on meds all the time, so I had to be active. That's when I started pursuing becoming a trainer."

Gonzales tells his clients that physical activity and perseverance are great medicines to combat diabetes and other ills. Participants often crowd his workshops at nearby reservations, he says. And on the days when nobody shows up, his personal success in using exercise to get healthy helps him stay optimistic.

"Things tend to move a little slow in Native country," he says. "Sometimes we just have to take baby steps."

As a provider, you can't give up, Gonzales says — lest your patients give up, too.

This story was produced by KQED's blog State of Health.