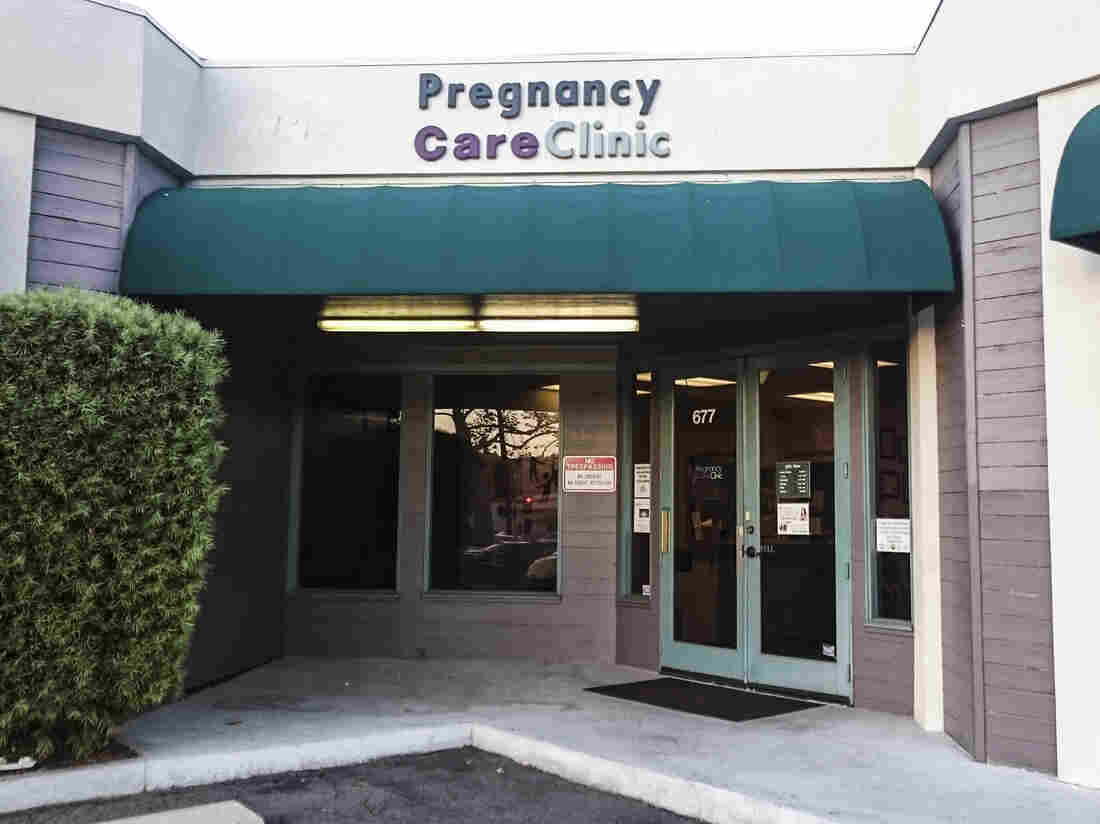 Roughly 800 women a year seek a free pregnancy test, counseling and other services at this center in El Cajon, Calif. The clinic encourages its clients to not get abortions, but a new law requires it to also prominently post information about where to find abortion services. Becky Sullivan/NPR hide caption 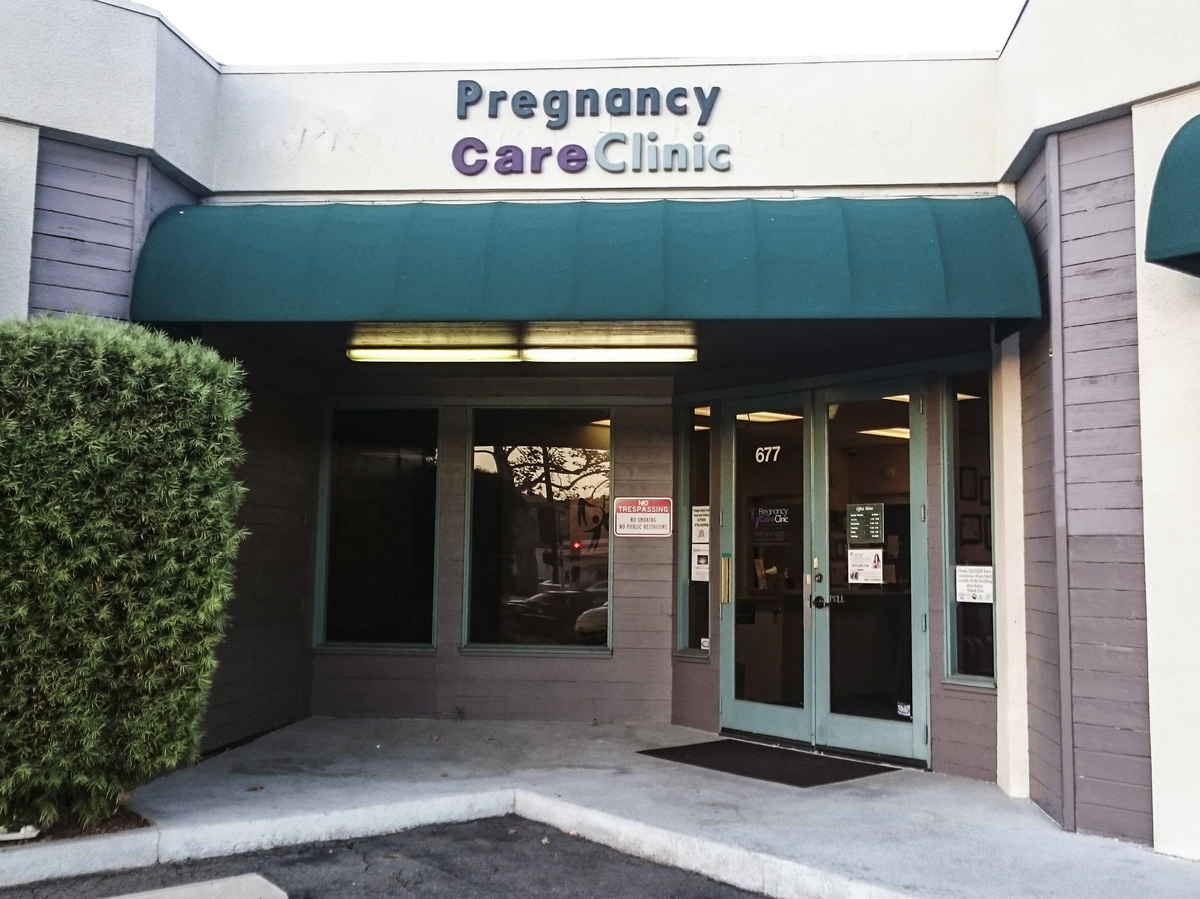 Roughly 800 women a year seek a free pregnancy test, counseling and other services at this center in El Cajon, Calif. The clinic encourages its clients to not get abortions, but a new law requires it to also prominently post information about where to find abortion services.

The latest front in the debate over religious freedom is all about an 8 1/2-by-11-inch piece of paper.

This particular piece of paper is a notice — one the state of California will soon require to be posted in places known as crisis pregnancy centers. These resource centers, often linked to religious organizations, provide low-cost or free services to pregnant women, while encouraging these women to not have abortions.

The new notice is mandated by the Reproductive FACT Act, and would make it clear that abortion is legally available in California.

But several pregnancy centers are suing the state, asking for the law to be struck down.

It's like telling the Alcoholics Anonymous group that they have to have a large sign saying where people can get alcohol and booze for free.

One of the clinics engaged in the lawsuit is the East County Pregnancy Care Clinic in El Cajon, Calif., just outside San Diego. The center describes itself as "a religious, nonprofit, pro-life, free medical clinic licensed by the State of California." It sits on the corner of a busy intersection, surrounded by strip malls.

A big sign out front says "free pregnancy tests." That's one way they get women in the door, according to executive director Josh McClure.

McClure is not a physician, though the clinic does have medical advisers who are doctors, he says. When we recently visited, he didn't permit NPR to talk to clinic staff, who are all either registered nurses or volunteers. But he did offer to show us around and walk us through the process of what happens to clients who come to the clinic thinking they may be pregnant.

Most of these women make appointments, he says, but the clinic also receives one or two walk-ins a day. The staff see about 800 women a year, and that number is on the rise.

First, clients fill out paperwork in the lobby, he explains, then are assigned to a volunteer he describes as an "advocate."

These volunteer advocates, who are not medical professionals, take the client into a small room called the library. There the volunteer leads the client through a conversation about her situation.

McClure says his volunteer will ask the client a series of questions to get at these issues: "Why do they think they're pregnant? [Are] they living with somebody? Is it a husband, boyfriend? What are the circumstances going on in their life? And if the pregnancy does happen to be positive, what are they thinking about right then?"

The library has two shelves with books like What to Expect When You're Expecting; anatomy models that show the size of the fetus at four weeks of gestation, eight weeks and so on; and VHS tapes about abortion and abortion providers. McClure says the tapes are from the 1970s and are hardly ever used.

After a client speaks with the advocate and reviews the pamphlets, she is taken to an exam room to take a pregnancy test.

The exam room looks like any medical examining room, with clean linoleum floors, health pamphlets, and a box of rubber gloves on the counter. In the center of the room is an exam table with a sheet of white tissue paper laid out over it. 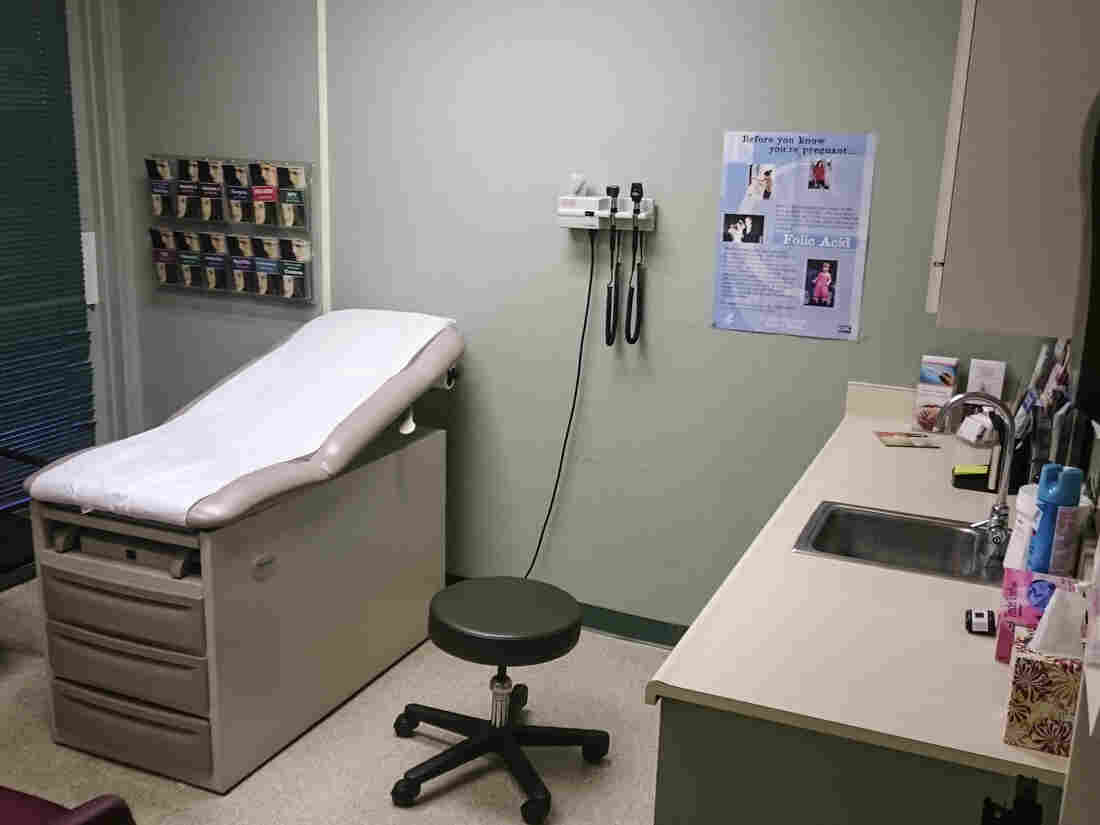 Women can get a free pregnancy test and a free ultrasound at the clinic, as well as counseling regarding three options — parenting, adoption and abortion. The clinic will not refer clients for abortions. Becky Sullivan/NPR hide caption 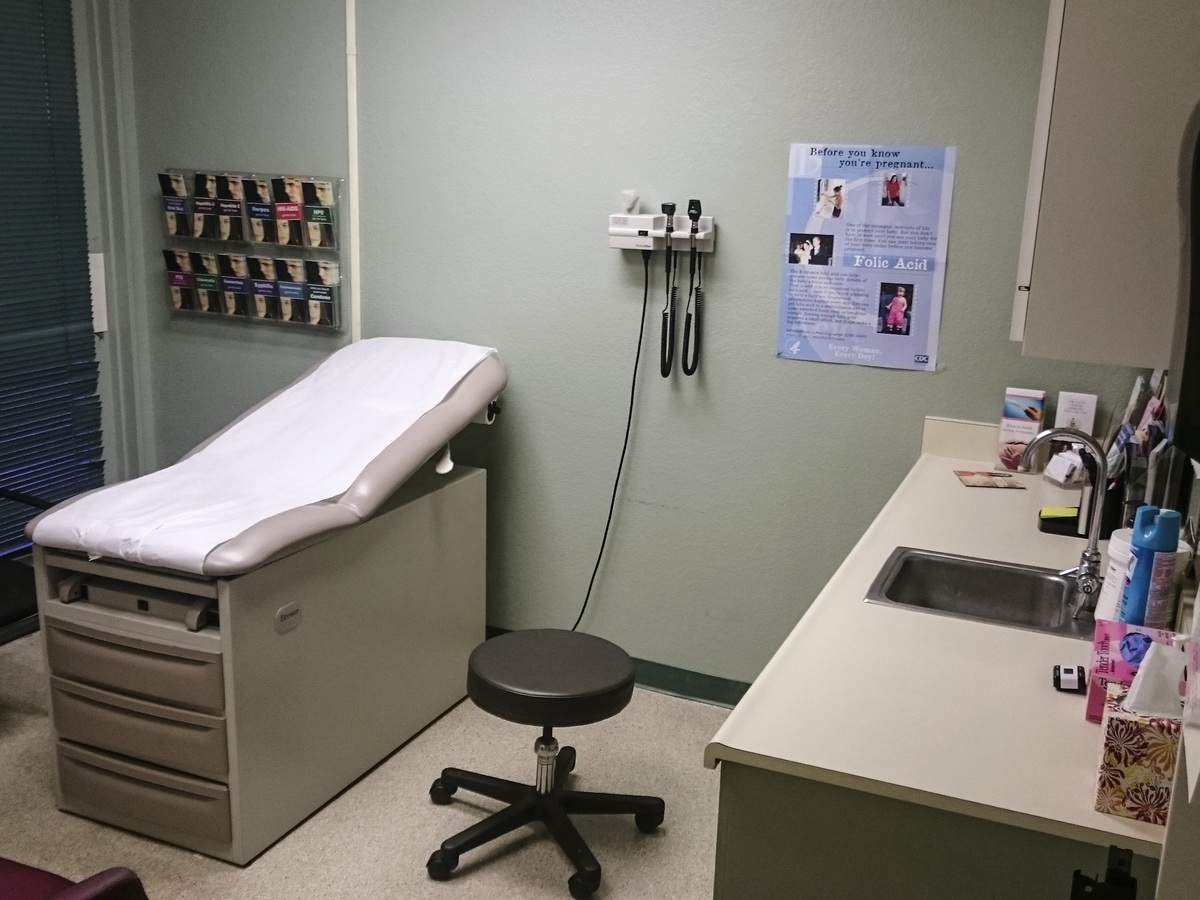 Women can get a free pregnancy test and a free ultrasound at the clinic, as well as counseling regarding three options — parenting, adoption and abortion. The clinic will not refer clients for abortions.

That's where a registered nurse would hand the patient a specimen cup to get a urine sample and do a pregnancy test, McClure says. It's the same test you might buy at a drug store, he says, but here it's free, funded by donations. The R.N. signs off on the results.

If the pregnancy test is positive, the nurse tells the client there are three options: parenting, adoption or abortion.

"We're going to talk about the benefits, responsibilities and side effects of all three," McClure says. "We would say, if it's an unplanned pregnancy, there really aren't any good solutions. They're all hard."

In the discussion of parenting, the nurse talks about the responsibility of an 18-year commitment to another human life, and the resources in the client's life that may be helpful. The nurse asks whether a boyfriend or husband would be involved.

"We do let them know, that if there's drug abuse, the reality is if you're not going to straighten your life out by the time the baby is here, that [Child Protective Services] would be coming to take that child," he says.

When it comes to abortion, the nurses do not tell clients where they can get an abortion or refer them to abortion providers, McClure tells us. But they will talk about the clinic's view of the risks of an abortion and the cost.

"Generally," McClure says, "the further along you go, the more expensive and more invasive and more risks there are. Risk of sterility is one. Perforated uterus is another. And then, of course, emotional side effects as well. All the information we're giving about the side effects is backed by research and referenced."

McClure didn't mention during our tour that at least some claims in that pamphlet used to train the clinic's nurses and volunteers are disputed by leading research organizations. For example, the suggestion that there might be a link between abortion and an increased risk of breast cancer has been studied and dismissed by the National Cancer Institute and other medical groups.

The clinic's pamphlet also states that abortion "significantly increases the risk" for conditions such as "clinical depression and anxiety" and "suicidal thoughts and behavior." But an American Psychological Association task force on mental health and abortion had a different take in its recent review, recognizing that "abortion encompasses a diversity of experiences."

According to the APA's task force report in 2008, "the best scientific evidence published indicates that, among adult women who have an unplanned pregnancy, the relative risk of mental health problems is no greater if they have a single, elective first-trimester abortion than if they deliver that pregnancy. The evidence regarding the relative mental health risks associated with multiple abortions is more equivocal."

Once a pregnant woman at McClure's clinic has been briefed by the staff on how their organization views the risks of abortion, she is brought to a room where she can get an ultrasound scan, free of cost.

There, McClure tells us, the ultrasound image is enlarged and projected onto a big flat-screen TV. Women often decide against abortion, he says, after they see the ultrasound.

"When you have an image on a screen, all the cloudiness of what we're talking about kind of goes away," McClure says. "They're able to see for themselves: OK, arms, legs, eyes, head. Bingo — that's a baby." 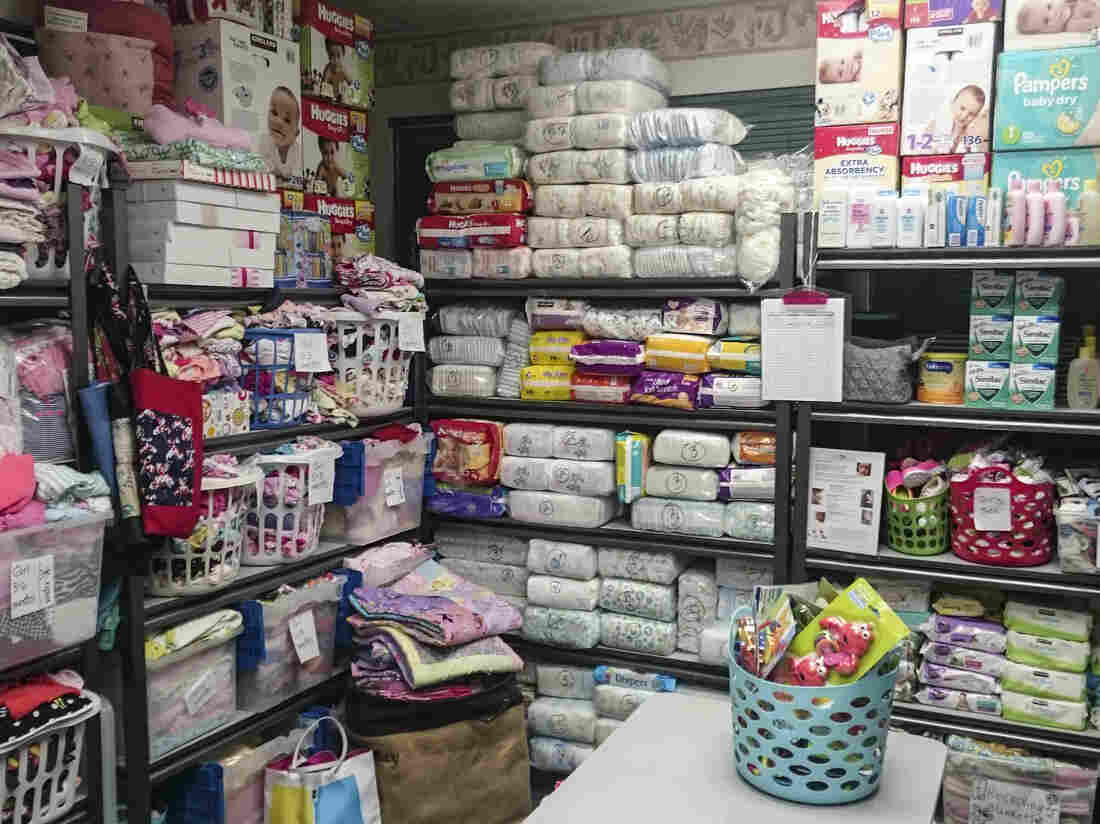 In its "care closet," the East County Pregnancy Care Clinic keeps donations of diapers, baby clothes, wipes, maternity clothes and other items to help clients who can't afford such supplies on their own. Becky Sullivan/NPR hide caption 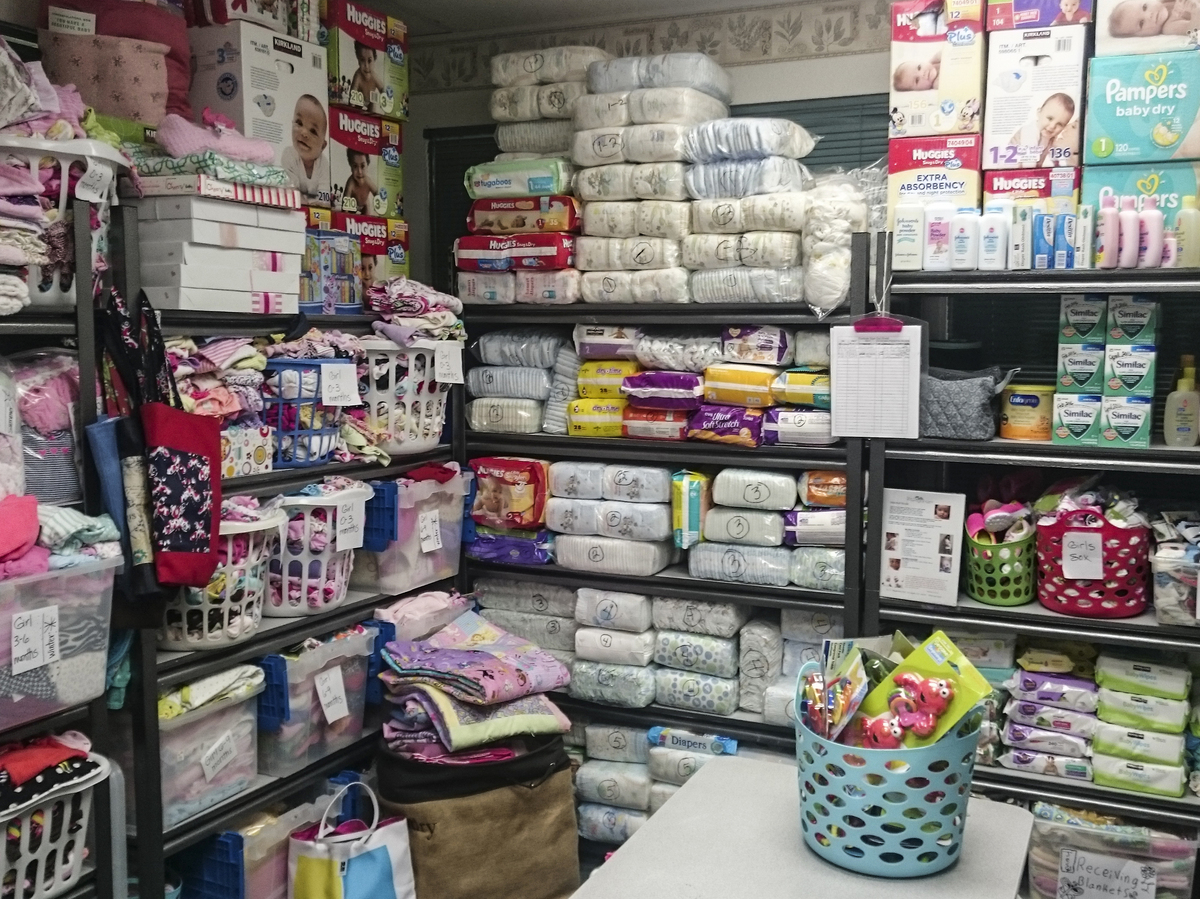 In its "care closet," the East County Pregnancy Care Clinic keeps donations of diapers, baby clothes, wipes, maternity clothes and other items to help clients who can't afford such supplies on their own.

The last stop is a closet full of diapers, wipes, baby clothes, blankets and maternity clothes — all available for free to clients who have trouble affording those things.

That's the end of the tour.

None of these things — no step in that process — would have to change under the Reproductive FACT Act.

California has public programs that provide immediate free or low-cost access to comprehensive family planning services (including all FDA-approved methods of contraception), prenatal care, and abortion for eligible women. To determine whether you qualify, contact the county social services office at [insert the telephone number].

This facility is not licensed as a medical facility by the State of California and has no licensed medical provider who provides or directly supervises the provision of services.

McClure says a sign in the lobby is not how or when he wants his clients at the clinic to hear about abortion. It goes against everything his center stands for, he tells NPR.

One of the people responsible for the law requiring this new sign is Autumn Burke, who represents Inglewood in the California Assembly.

Burke tells NPR that her interest in the issue started the day she went to get her phone fixed at a shop near a clinic that performs abortions. Protesters outside the clinic gave her pamphlets, she says, making claims that she knew weren't true.

"It [said] that abortion causes breast cancer," Burke recalls, "that if you are on birth control boys will not like you, or they will take advantage of you."

A few days later, one of Burke's colleagues in the California Assembly asked her to co-sponsor the Reproductive FACT Act.

"And I thought, you know what? This is timely — making sure women have the correct information," Burke says.

A number of health and medical groups, including the regional district of the American Congress of Obstetricians and Gynecologists, the California Nurses Association and the Primary Care Association also supported the legislation.

Burke acknowledges that some crisis pregnancy centers do give good help to women who want to have babies. But she says that others give false information to women, or pose as clinics even though they don't have a medical license.

Burke says the law is for those bad actors, and that putting up this sign in these centers wouldn't be much different from a notice from the health department or the building inspector.

Brad Dacus of the Pacific Justice Institute, one of the groups suing the state of California over the new law, could not disagree more.

Dacus' organization has filed a challenge to the law in federal court.

Some U.S. cities, including Austin, Texas, Baltimore and San Francisco, have passed similar legislation and have faced similar legal challenges — with mixed results.

The state of California so far is the largest jurisdiction in the country to pass a law requiring these centers to inform women about the availability of abortion services. If the law holds up, it could make way for measures like it in other cities and states.

Brad Dacus says that if the case has to go all the way to the Supreme Court to stop the law, so be it. To him, the legal battle is all about upholding the right to religious freedom.

The lawsuits against the Reproductive FACT Act are now making their way through the courts.

In the audio of this story, we incorrectly state that the East County Pregnancy Care Clinic office was previously occupied by an insurance company. In fact, it was a credit union.