Accessibility links
To Prevent Addiction In Adults, Help Teens Learn How To Cope : Shots - Health News Many people who become addicted to drugs, tobacco or alcohol start using as teenagers. So more effort is being put into helping teenagers stop before they get in too deep. 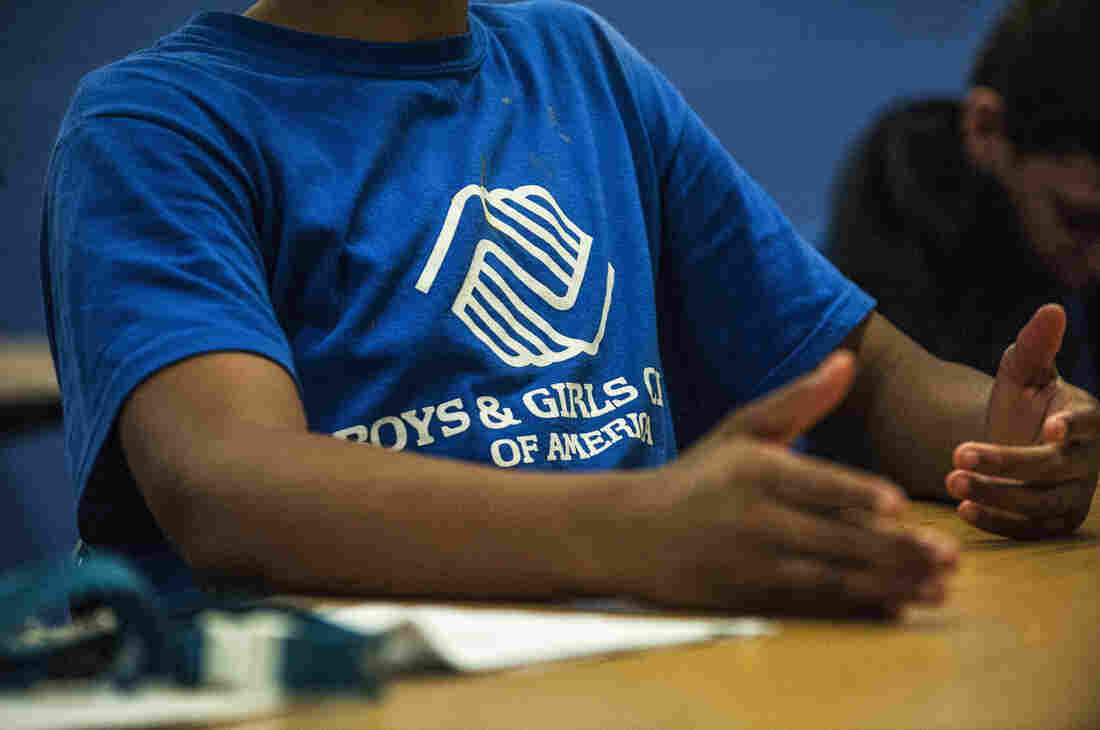 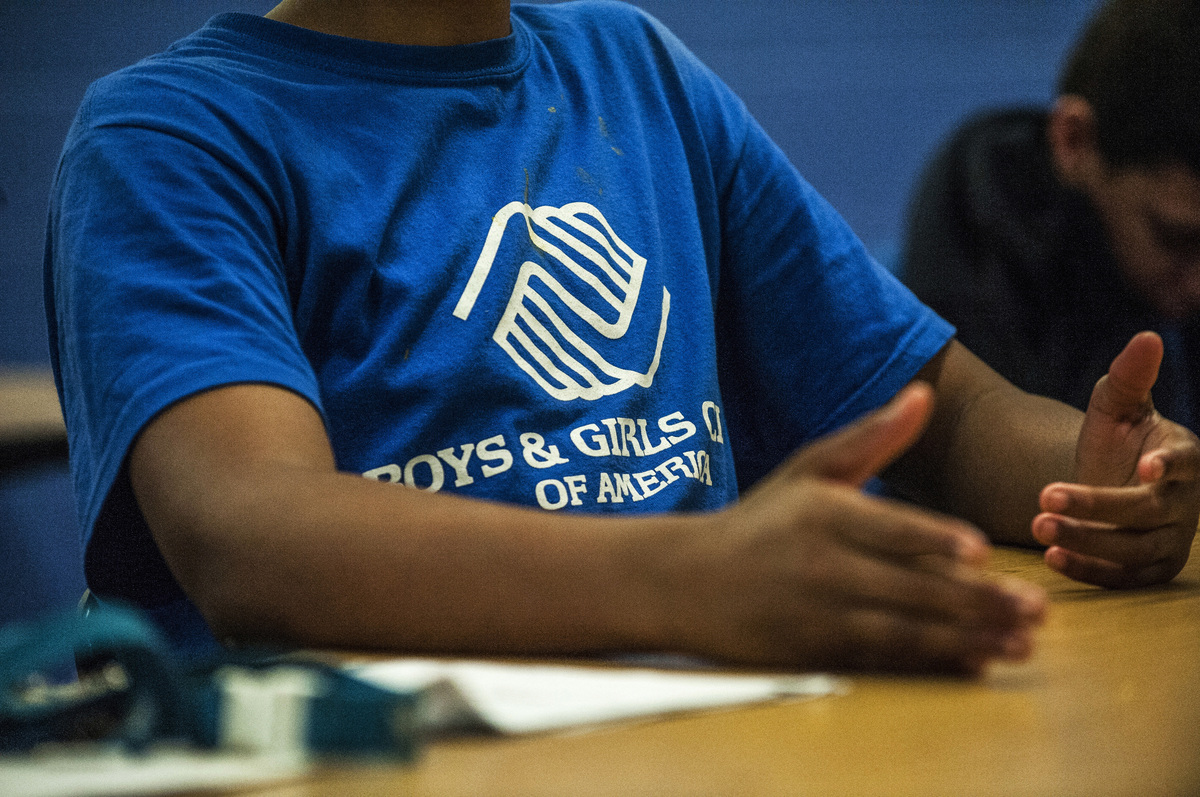 Addiction is a pediatric disease," says Dr. John Knight, founder and director of the Center for Adolescent Substance Abuse Research at Boston Children's Hospital. "When adults entering addiction treatment are asked when they first began drinking or using drugs, the answer is almost always the same: They started when they were young — teenagers," said Knight.

Smoking, drinking and some forms of drug use among teens have declined in the U.S. in recent years, but an estimated 2.2 million adolescents — 8.8 percent of youth aged 12 to 17 years old — are currently using an illicit drug, according to a 2014 Behavioral Health Barometer prepared for the Substance Abuse and Mental Health Services Administration (SAMHSA).

Drug use changes brain development, and when substances are used during adolescence, young people are much more likely to become addicted, Knight said. "When people start using at younger ages, the changes in brain structure and function are very, very pronounced," he explained. "If we could only get kids to postpone their first drink or their first use of drugs, we could greatly diminish the prevalence of addiction in the U.S."

And in some places, teenagers may be using more, sooner. "In the last several years, it seems like the kids that we see in services are far sicker than in the past," said Sara Ellsworth, clinical supervisor at True North Student Assistance and Treatment Services in Olympia, Wash.

Last year, True North served nearly 700 students in 44 mostly rural school districts. Increasingly, she said, kids who come for help have a history of victimization or significant trauma, such as domestic violence, physical or sexual abuse, parental incarceration or substance abuse, rape or homicide. More than half also had at least one mental health disorder.

Despite some improvements in the national youth substance abuse numbers, Ellsworth has witnessed a disturbing new pattern: kids who start using alcohol or marijuana at ever younger ages as a form of self-medication, who quickly escalate to more dangerous drugs, and who wind up using multiple substances in extreme amounts. "Maybe the average kid is using less and doing better, but the kids who are falling through the cracks are spiraling down, really fast," she said.

About 10 percent of Americans will develop a substance-use disorder at some point in their lives and need therapeutic services, according to Rob Vincent, a SAMHSA public health analyst. But those services are hard to come by, especially for youth.

"Once a child 12 to 17 years old is identified as needing treatment, only 1 in 20 of those adolescents is actually getting treatment. That is not a good number," said Vincent. 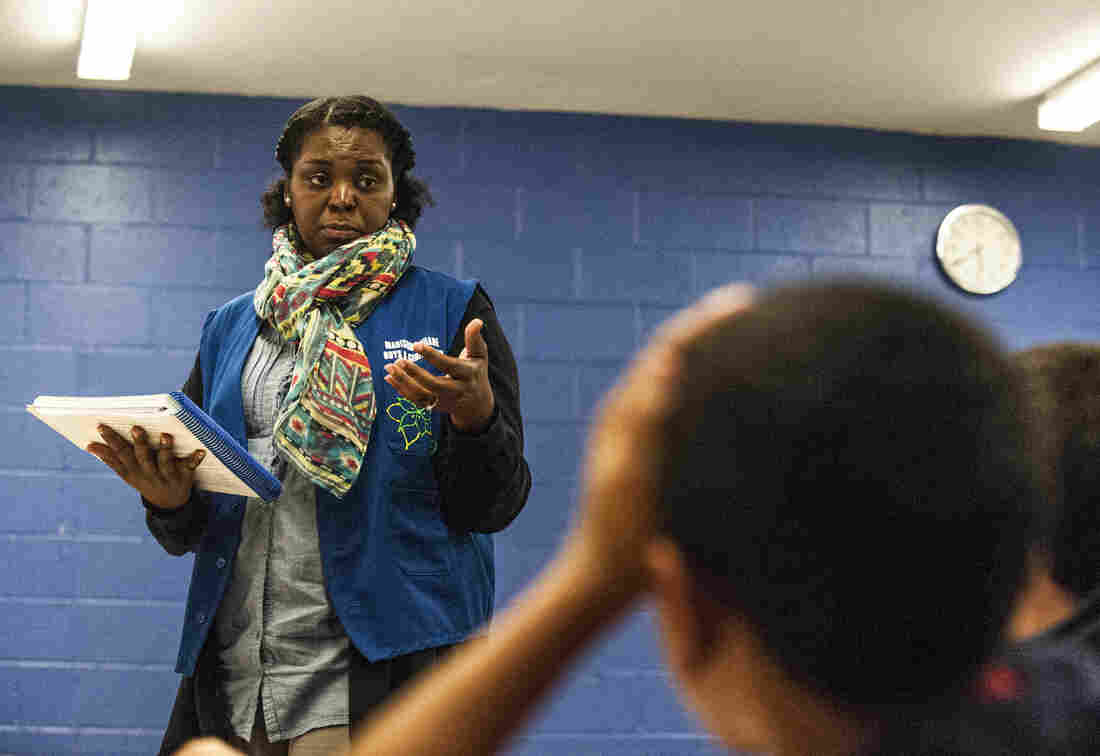 Yolanda Roberson, who directs the Empowerment program, teaches a class at a Boys and Girls Club in the Bronx. The classes are funded by the state of New York. Robert Stolarik/Courtesy of Youth Today hide caption 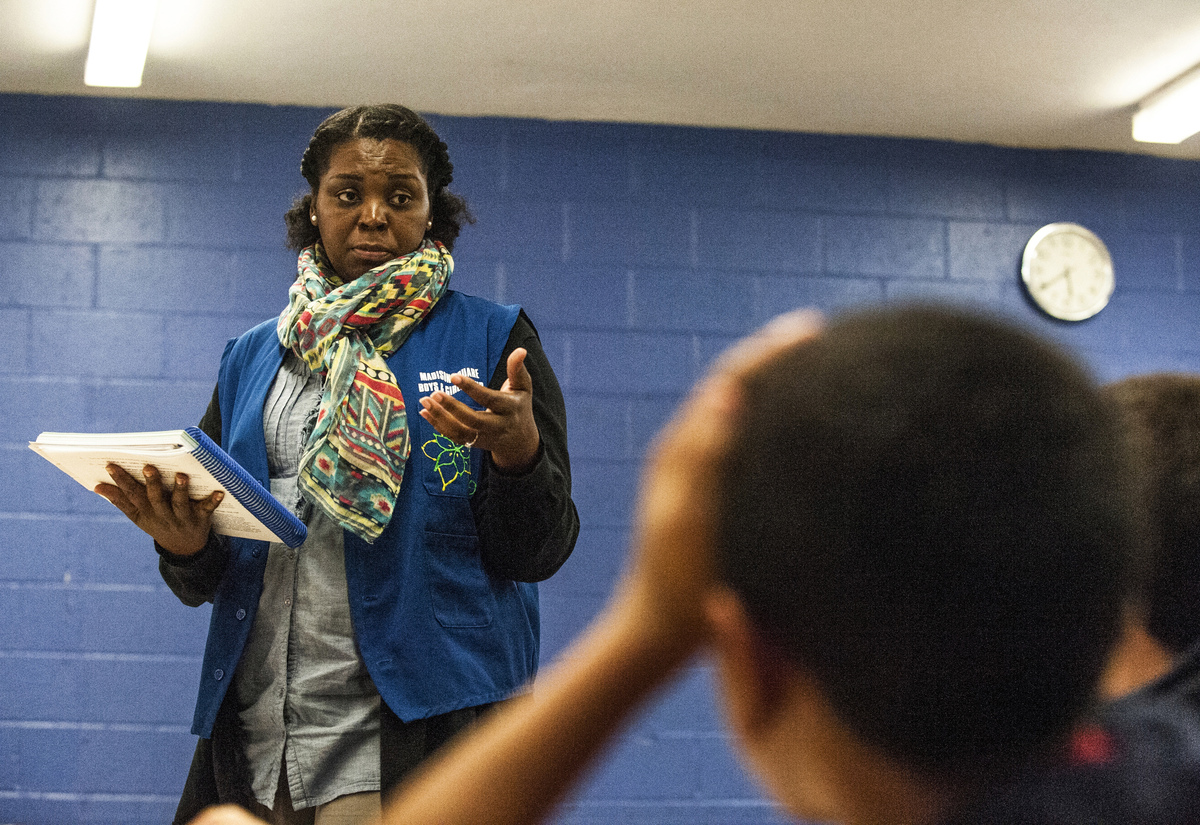 Yolanda Roberson, who directs the Empowerment program, teaches a class at a Boys and Girls Club in the Bronx. The classes are funded by the state of New York.

The leading prevention strategy, dubbed SBIRT — Screening, Brief Intervention and Referral to Treatment — is deployed in schools, afterschool programs and most widely, in primary and public health care.

Most pediatricians routinely screen patients for substance problems during annual visits. That's a big change from just 20 years ago, when the American Academy of Pediatrics found that fewer than half of pediatricians reported they were screening adolescents for substance use. By 2013, that percentage had risen to more than 80 percent, according to Dr. Sharon Levy, director of the adolescent substance abuse program at Boston Children's Hospital.

"I interpret that as a real shift in culture, from one in which there was controversy over whether drug use was a legitimate topic for pediatricians to address to one in which it's now part of the standard of care," Levy said. She sees the pediatrician's office as an ideal place to discuss substance abuse. "It's a unique setting in which an adolescent gets to have a confidential conversation" with an adult who is not their parent.

Doctors use one of a variety of screening tools, including one, called CRAFFT, that was developed by Knight. It asks six questions, including: "Have you ever ridden in a car driven by someone (including yourself) who was "high" or had been using alcohol or drugs?"

In many doctors' offices, the survey is now computerized or given as a questionnaire before the medical visit, so doctor and patient can discuss the results. (You can take the CRAFFT screening test here; it's available in 13 languages, including Khmer and Haitian Creole.)

Other screening tools widely in use are called frequency-based screens. Those tools use multiple-choice questions which ask teenagers how often they have used alcohol or marijuana to predict their risk of developing an addiction.

If screening turns up troubling behavior, the second step is brief intervention. In the doctor's office, that could be a five-minute conversation with the two elements that Knight says comprise a good brief intervention: science and stories. "What they want from doctors is, 'Tell us what the science is, don't tell us what to do; give us the information and trust us to make the right decisions.' "

The intervener can also be a therapist, counselor or youth-development worker. They often use what's called "motivational interviewing." That's the approach used by Elizabeth D'Amico, a licensed clinical psychologist and senior behavioral scientist at RAND Corporation, who developed CHOICE, a voluntary afterschool prevention and intervention program in California.

"Motivational interviewing is about guiding someone to make a healthy choice," D'Amico said, "versus saying, 'Okay, you have a problem and you need to change.' "

Counselors have to acknowledge there are reasons why young people use alcohol or drugs, D'Amico said. "You lose all your credibility if you just say, 'It's bad for you, stop.' "

Instead, motivational interviewing is more collaborative, said D'Amico. For example, if a teen says he drinks to relax, the counselor can help him to think of other, healthier ways to relieve stress. Studies have found a modest benefit in the program, with some students delaying drinking.

The third step of a prevention strategy, referral to treatment, connects youth who need more care with specialty treatment. Levy said most teenagers with a drug or alcohol problem don't need a residential program, or even an intensive outpatient program. Instead, they'll do fine working one-on-one with a counselor, she said.

In Washington, Ellsworth at True North Student Assistance and Treatment Services says that students served by the prevention programming have done better. In the last academic year, students said their use of marijuana and cocaine declined by half after participating in the program, and alcohol use declined by one-third. Participants also had better grades and fewer behavior problems at school. 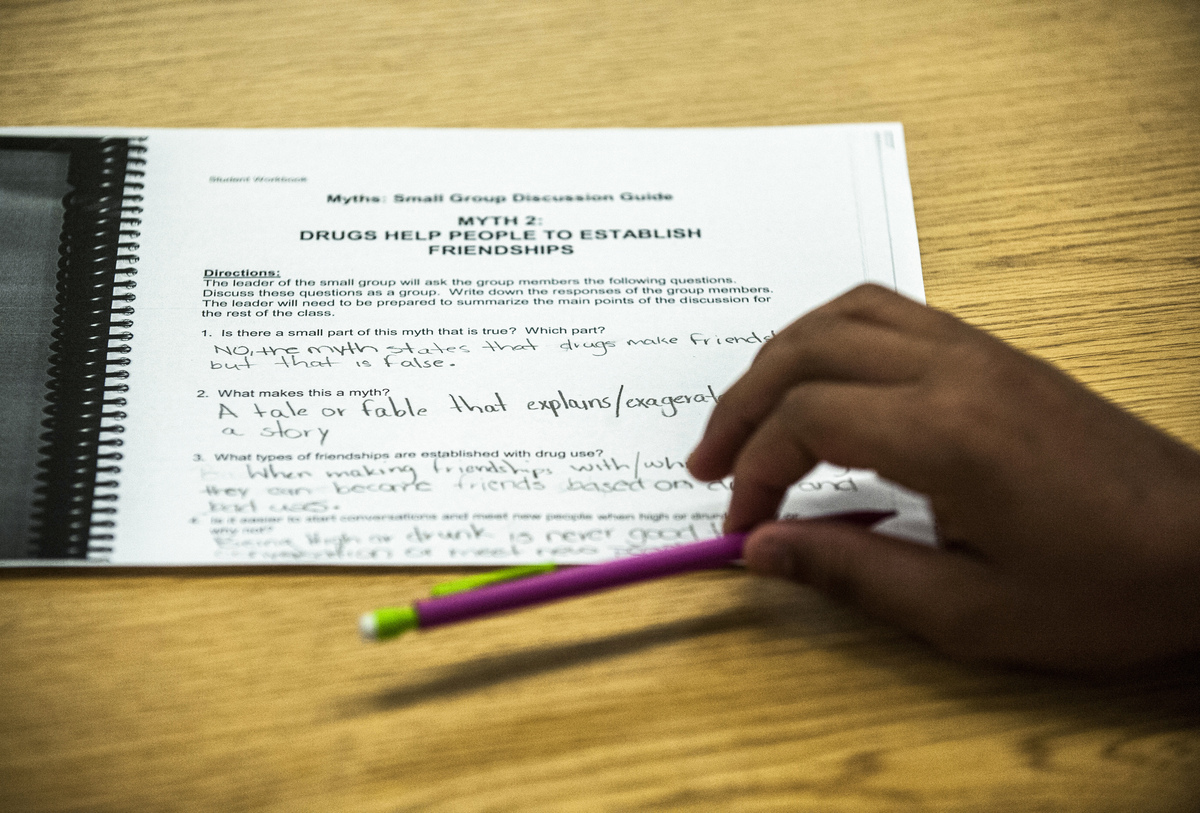 Even the computerized CRAFFT screening, with a few minutes of counseling by a pediatrician, has been shown to deter substance use, according to a study led by Knight and published in the journal Pediatrics in 2002. "The intervention resulted in 40 percent less substance use three months after the visit, and 12 months later there was still 25 percent less use, without any reinforcement. That's pretty powerful," said Knight.

Prevention is a cost-effective proposition, according to the National Institute on Drug Abuse (NIDA), with every dollar invested in keeping kids off drugs saving from $4 in health-care costs to $7 in law enforcement and other criminal justice costs. According to NIDA, research-based prevention programs can significantly reduce early use of tobacco, alcohol and illicit drugs.

Yet according to Knight, "of all the money that is spent by the federal government on the so-called war on drugs, only 5 percent goes to prevention." That's a short-sighted approach, he said. "The evidence is compelling that addiction is a pediatric disease, and if we don't prevent it during the teen years, we're really missing the boat."