Accessibility links
A Genetic Map Hints At What Makes A Brain Human : Shots - Health News Differences in the patterns of genes that are turned on in brains of people and mice suggest glial cells may have helped humans develop brains that can acquire language and solve complex problems. 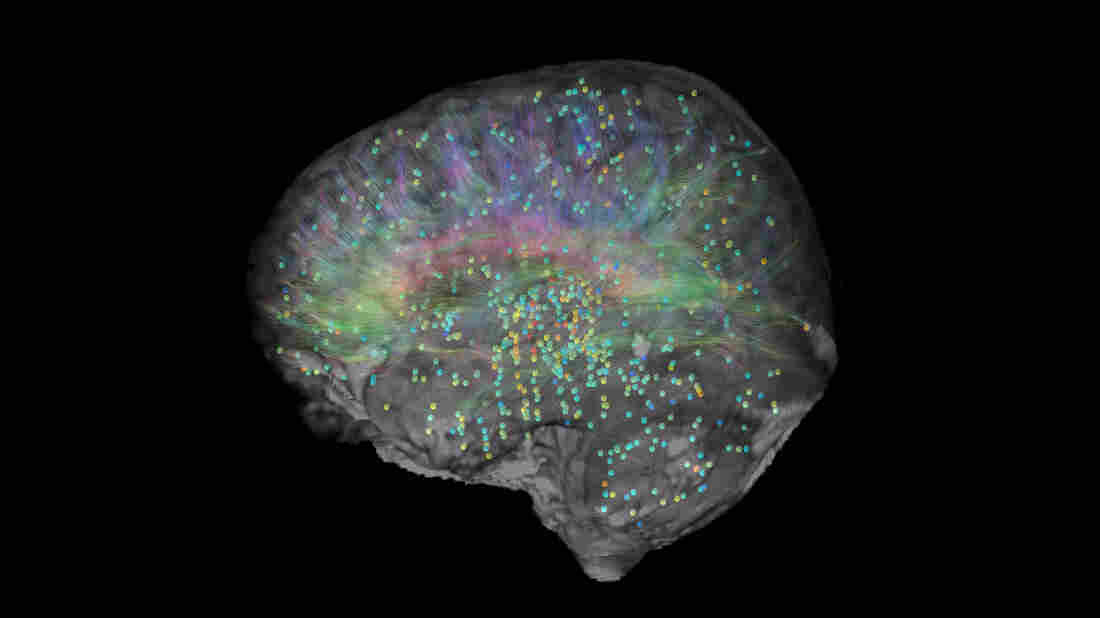 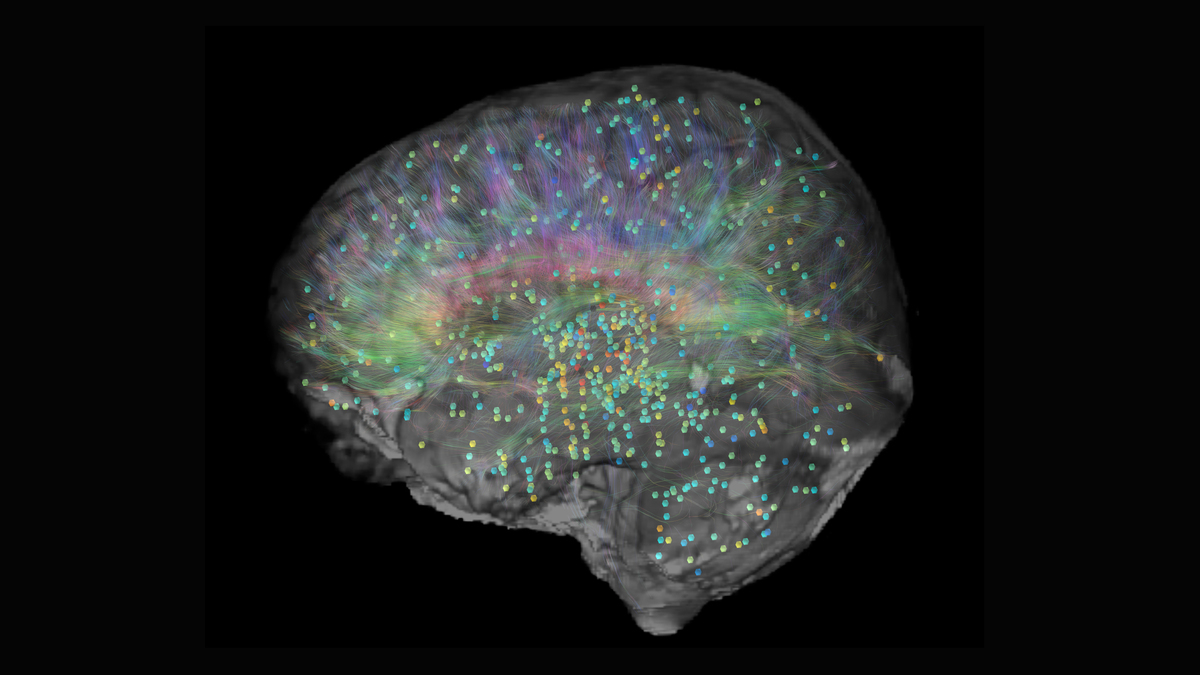 An image from the Allen Institute's Brain Explorer shows gene expression across the human brain.

Patterns of gene expression in human and mouse brains suggest that cells known as glial cells may have helped us evolve brains that can acquire language and solve complex problems.

Scientists have been dissecting human brains for centuries. But nobody can explain precisely what allows people to use language, solve problems or tell jokes, says Ed Lein, an investigator at the Allen Institute for Brain Science in Seattle.

"Clearly we have a much bigger behavioral repertoire and cognitive abilities that are not seen in other animals," he says. "But it's really not clear what elements of the brain are responsible for these differences."

Research by Lein and others provides a hint though. The difference may involve brain cells known as glial cells, once dismissed as mere support cells for neurons, which send and receive electrical signals in the brain.

Lein and a team of researchers made that finding after studying which genes are expressed, or switched on, in different areas of the brain. The effort analyzed the expression of 20,000 genes in 132 structures in brains from six typical people.

Usually this sort of study is asking whether there are genetic differences among brains, Lein says.

"And we sort of flipped this question on its head and we asked instead, 'What's really common across all individuals and what elements of this seem to be unique to the human brain?' " he says.

It turned out the six brains had a lot in common.

"One of the big findings of the paper is that whereas there's a lot of very, very small variation, on the grand scale in the brain there's only a limited number of patterns," says Mike Hawrylycz, another Allen Institute investigator and lead author of the paper, which appears in Nature Neuroscience.

The team first identified 32 of the most common genetic expression patterns. And they found that the genes that were least likely to vary from person to person included those known to be associated with diseases such as epilepsy, autism, Parkinson's and Alzheimer's.

The expression patterns also revealed genes that haven't yet been linked to a brain disease, but are likely candidates.

Then the team compared expression patterns found in people with those found in mice. "And it turns out that the patterns which are typically most associated with some of these diseases are not really well recapitulated in the mouse," Hawrylycz says.

The discrepancy could help explain why brain drugs that work in mice often fail in people.

The comparison of mouse and human gene expression patterns also found a difference involving glial cells. "The patterns that are more related to the neurons, the sort of information carriers in the brain, tend to be better conserved across species," Lein says. "Those that are related to the support cells, the glial cells, are actually less conserved. This was somewhat of a surprise."

But not a complete surprise. For a long time scientists believed glial cells weren't involved in higher brain functions, like thought. In recent years, though, a number of studies have suggested that glial cells, and especially a star-shaped variant called an astrocyte, play an important role in learning and intelligence.

"We've spent a lot of years studying the function of glial cells using the mouse brain as a model system," says Ben Barres, a professor of neurobiology at Stanford School of Medicine. "And we've found, to our great surprise, that the glial cells are actually much more active in controlling neural circuits in the brain than people had generally thought."

Research from Barres' lab has already shown that astrocytes help determine when and where neurons make connections in the mouse brain. And the lab has begun studying astrocytes in the human brain.

He says he's confident that scientists will eventually find out what makes the human brain different. But they may have to employ a new technique, he says, which uses stem cells to grow miniature human brains in the lab.