Listen to part one of this story

In Tennessee, Giving Birth To A Drug-Dependent Baby Can Be A Crime

Listen to part one of this story

Listen to part two of this story 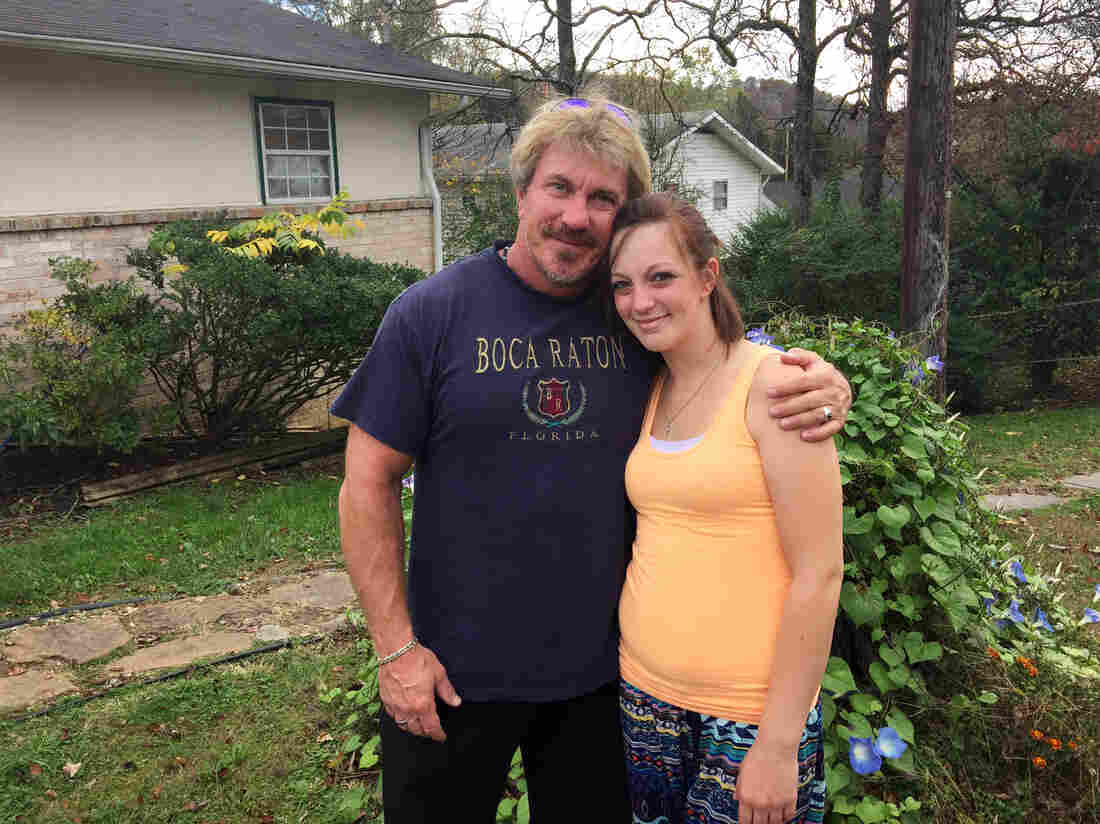 Jessica Roberts and her father, Alan Roberts, who has struggled with addiction himself. They are both clean and hope to break the cycle of addiction with the newest generation of their family. Mallory Yu/NPR hide caption Jessica Roberts and her father, Alan Roberts, who has struggled with addiction himself. They are both clean and hope to break the cycle of addiction with the newest generation of their family.

In the United States, a baby is born dependent on opiates every 30 minutes. In Tennessee, the rate is three times the national average.

The drug withdrawal in newborns is called neonatal abstinence syndrome, or NAS, which can occur when women take opiates during their pregnancies.

In the spring of 2014, Tennessee passed a controversial law that would allow the mothers of NAS babies to be charged with a crime the state calls "fetal assault." Alabama and Wisconsin have prosecuted new mothers under similar laws, and now other states are also considering legislation.

Supporters of the laws say they can provide wake-up calls to women dependent on drugs and encourage them to get help. The Tennessee law says that getting treatment for drug use is a valid defense against fetal assault charges. But critics say criminalizing the effects of a woman's drug dependence on her newborn child makes it less likely for her to seek help when it could do the most good.

The problem of NAS is growing nationwide. Nearly 6 in 1,000 babies born in the U.S. in 2012 were diagnosed with NAS, according to a study published in the Journal of Perinatology in August. That's nearly double the level seen in 2009.

In Tennessee, billboards on the side of highways declare, "Your baby's life shouldn't begin with detox," with an image of a newborn baby's foot attached to a medical monitor. The signs are strategically placed in areas with the biggest substance abuse problems, like Oak Ridge — a town surrounded by poor, rural communities in northeastern Tennessee.

On a drizzly Monday afternoon in Oak Ridge, a group of women sits in a circle in a low brick building. Some of these women have their babies — bouncing on their knees or rocking gently in car carriers. These women are all in recovery, and some are recently out of prison for fetal assault. The group is called Mothers and Infants Sober Together, or MIST, and provides outpatient treatment for mothers addicted to drugs.

Each woman takes her turn checking in with Michelle Jones, who runs the MIST program. The women talk about their challenges and triumphs, their cravings. One pregnant woman admits to feeling guilty for being on a medicine prescribed by her doctor to ease her cravings for opiates.

"Can I say something? Don't feel guilty," another woman pipes up, "because it's going to help you right now."

Jones sits in the circle with them, week after week, asking questions and prompting them to open up. It's not an easy task. Many of them were afraid to talk at first.

Avoiding Prenatal Care Out Of Fear

Brittany Crowe used to be one of those women. Now, she shares her story.

"I could have gone [to] a baby doctor at first, but I was scared because of the new law," Crowe tells the group. When she was pregnant with her youngest son, she was addicted to prescription drugs and knew that if she went to a doctor, a drug test would come back positive. So she stayed away. She had no prenatal care through her entire pregnancy. She was so afraid of going to jail and losing custody of her children that she considered giving birth at home. 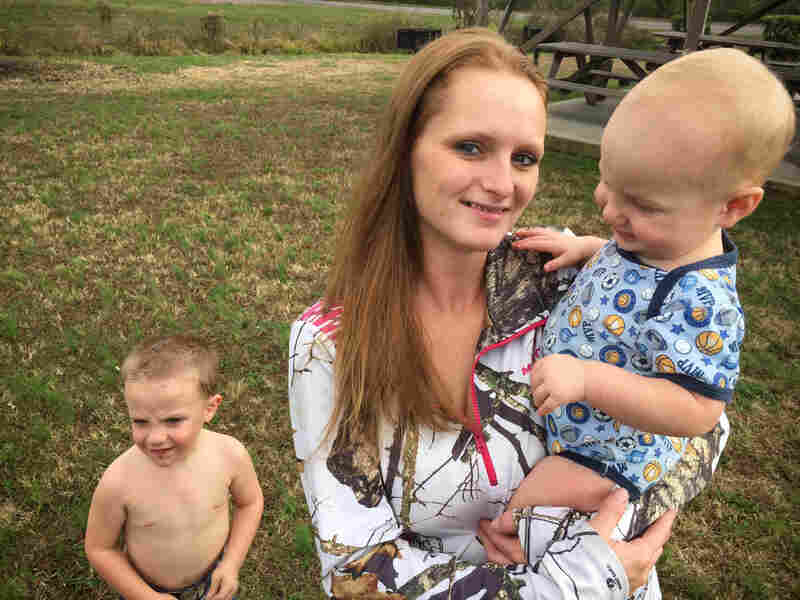 Brittany Crowe just completed an addiction treatment program that helped her regain custody of her children. Here she holds Allan, who was born with neonatal abstinence syndrome, as her son James stands behind them. Ari Shapiro/NPR hide caption 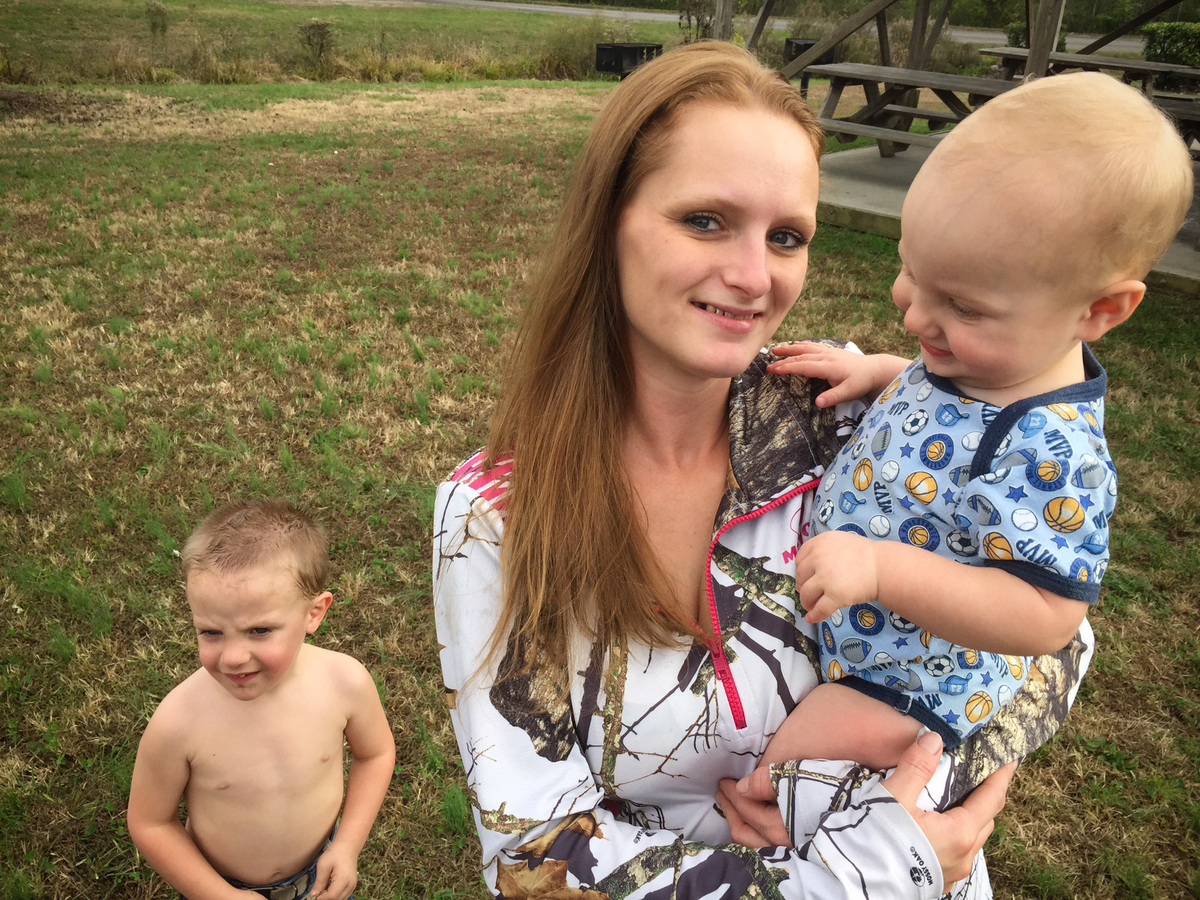 Brittany Crowe just completed an addiction treatment program that helped her regain custody of her children. Here she holds Allan, who was born with neonatal abstinence syndrome, as her son James stands behind them.

"I worry about that a lot now," she told us later. "I wonder how many babies are not known about because the mothers are afraid to get help, and then they're born at home and nobody ever knows about these babies. If they're going through withdrawal so bad, they're going to pass away."

Crowe finally went to the hospital 10 minutes before she gave birth. Her son was born with neonatal abstinence syndrome. The Department of Children's Services took him and her older children away and put them in foster care. Crowe enrolled in the MIST program to get clean.

Crowe's experience points to one reason medical professionals and social workers oppose the fetal assault law: They worry that the law will keep women from getting medical care. Dr. Jessica Young, an OB-GYN at Vanderbilt University who specializes in addiction during pregnancy, says the law has made her patients afraid.

"So now they're making decisions on medical care out of fear rather than out of science or what is best for them and their baby's health," she says. "Fear makes people make rash unsafe decisions without the consultation or guidance of a physician." 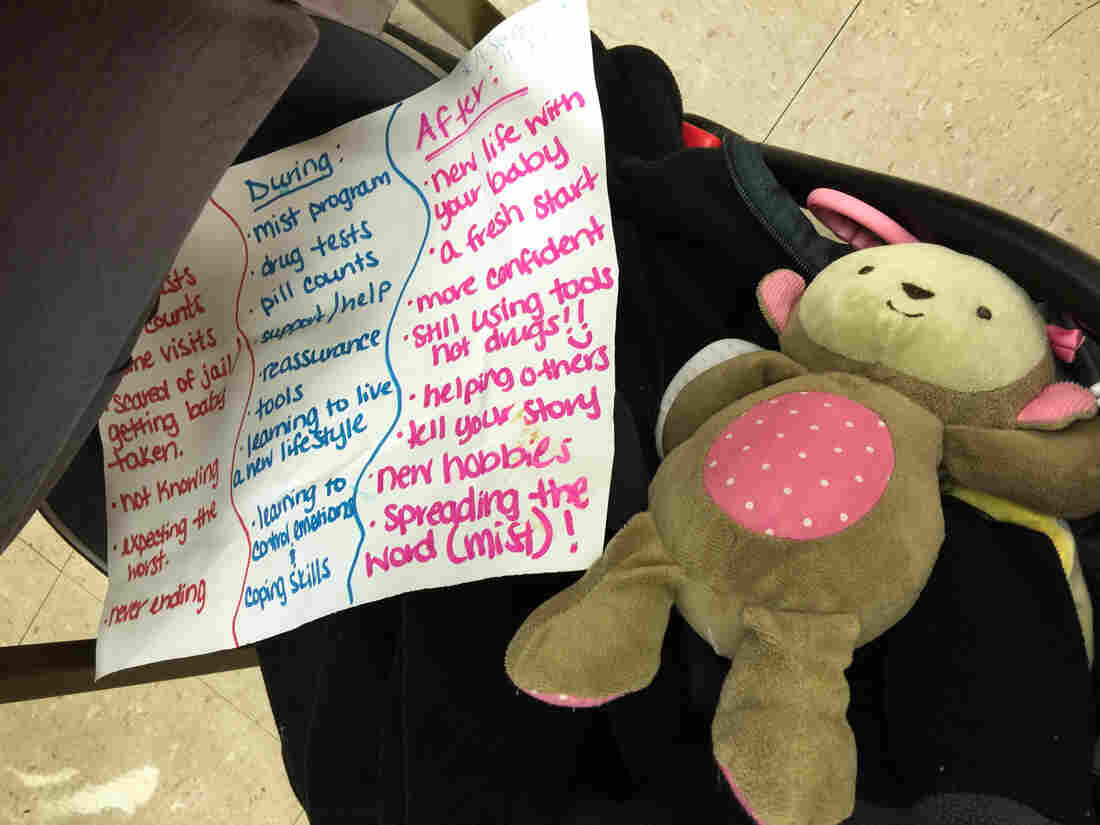 One mother details her journey with addiction in a group therapy session at Mothers and Infants Sober Together. Mallory Yu/NPR hide caption 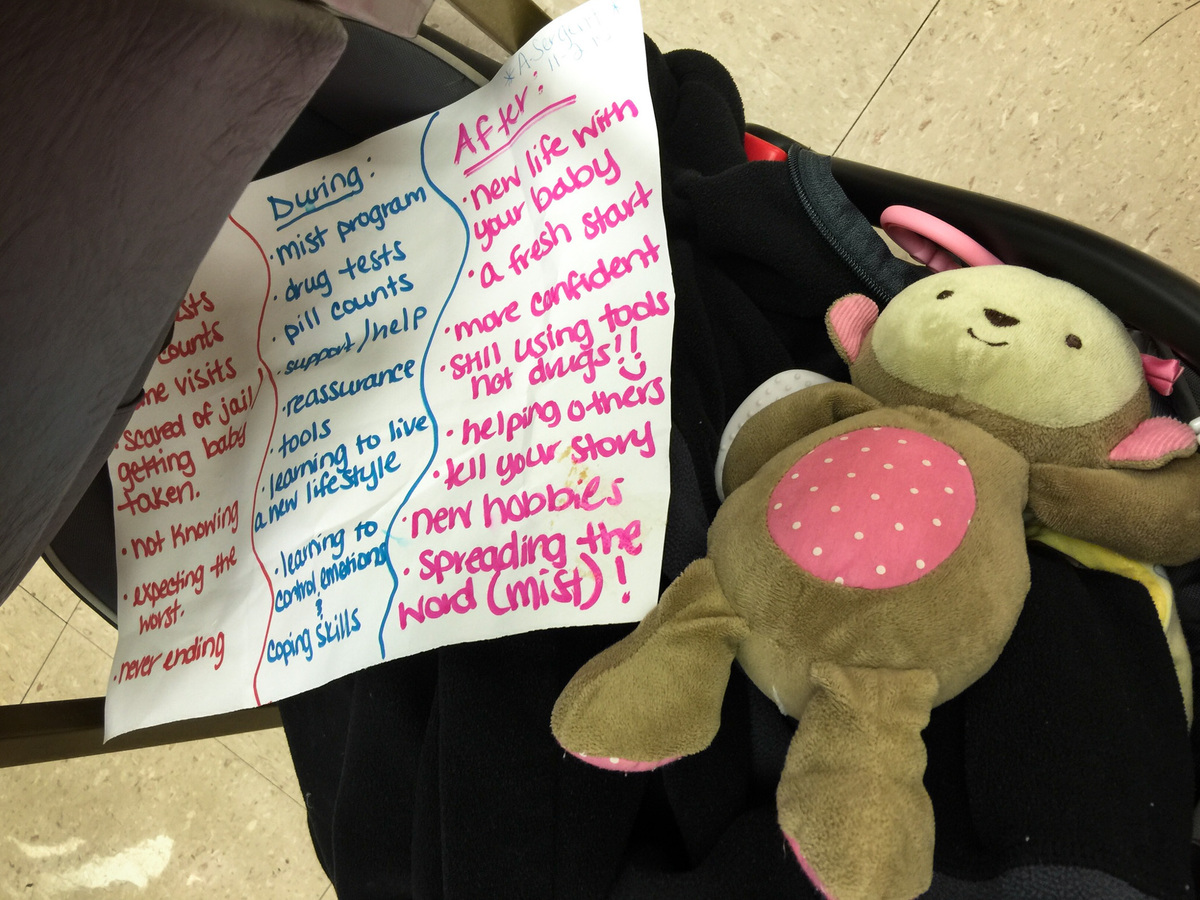 One mother details her journey with addiction in a group therapy session at Mothers and Infants Sober Together.

"We want to get these women help," she says. They "weren't getting help — not going to prenatal care anyway. Their mindset is not on prenatal care. The mindset is on the next drug." She hopes the law can act as a wake-up call to addicted women that will motivate them to seek help.

Some of the mothers at MIST told us the law did scare them into getting help. When Jessica Roberts got pregnant, the law drove her to enroll in rehab twice, but it didn't make her quit. She relapsed both times, injecting herself with opiates.

"What finally broke me was, I was 31 weeks. I had tied off to hit myself. And I put my arm on my stomach. And [the baby] kicked my arm off. And that broke me," she says. "To me, it was like my baby saying 'Mom, you can't do this anymore. I need you.' And it hurt."

When Roberts wanted help quitting cold turkey, she had a hard time finding it. Not many rehab clinics will detox a pregnant woman, and the few that do have long waiting lists. Doctors disagree on whether detoxing a pregnant woman is really best for mothers and their babies. Instead, most physicians recommend a gradual tapering of less harmful medications like methadone, paired with a comprehensive addiction treatment program. Those programs are scarce, however, and often have long waiting lists of their own.

Young's clinic at Vanderbilt, for instance, has a waiting list of up to eight weeks, and the majority of her patients have to drive over an hour to see her.

At the state Department of Children's Services, Connie Gardner says it feels like Tennessee is "drowning in the drug problem," and nobody has thrown the state a life preserver. She understands why mothers view her office with distrust and fear. The department makes the decision about when babies should be taken from a mother and put into foster care.

Even the law's advocates acknowledge that there isn't enough help for the women who want it. Barry Staubus, the district attorney for Sullivan County in the northeast corner of Tennessee, has prosecuted more than 20 drug-using mothers this year.

"Of course I'm for funding programs and making those programs available," he says. "There's always the call for more funding, but we can't let that get in the way of a good idea ... or an effective program."

Staubus believes that there need to be real consequences to women who chronically abuse powerful prescription drugs while pregnant. He says the threat of jail time would scare even the most defiant women, who had been previously unwilling to get into a program.

The Tennessee law is set to expire next year, unless state legislators renew it. So its effectiveness is under close scrutiny.

Births Of Addicted Babies Up In Nashville

At Vanderbilt Hospital's Neonatal Intensive Care Unit in Nashville, the persistent squealing cry of newborns going through drug withdrawal provides an audible reminder that this problem is far from solved. In the year and a half since this law took effect, the numbers of NAS babies have not gone down, says Dr. Stephen Patrick, who researches neonatal abstinence syndrome at the hospital. He saw 100 cases last year, and the hospital is on track to see at least that many this year. He doesn't think punishment is the right way to solve this problem.

NAS is a treatable condition in newborns, he says, and there isn't enough research to know what its long-term effects on a child might be. "There was a lot of concern about the cocaine epidemic and Time magazine calling it a 'lost generation.' I think we should be really cautious in how we frame this moving forward," he says. "The evidence really doesn't support that for neonatal abstinence syndrome. And, in fact, we know that other substances, legal substances such as alcohol, are far more harmful long-term to infants."

On a warm fall afternoon, Crowe and her children are at the park. Her older kids play in a stream as she holds her youngest on her hip. He's 9 months old, with big blue eyes and a tuft of blond hair.

One of her boys runs up to her, a mischievous smile on his face.

"Don't you splash me," she warns, but there's amusement in her voice.

He giggles and Mom gets a faceful of muddy water. She laughs as she wipes it from her eyes. He splashes her again.

Is she having second thoughts about having her children back?

"I think it's a little too late," she says, laughing. "I can honestly say a year ago I wouldn't have been here." She's grateful to be here now. Free of drugs, and finally reunited with her children.

This is the first story in a series that was produced by All Things Considered in collaboration with Nashville Public Radio reporter Blake Farmer.