Accessibility links
A Tiny Pill Monitors Vital Signs From Deep Inside The Body : Shots - Health News Sensors that work inside the body are gaining new skills. The latest version can track heart rate and respiratory rate, as well as temperature, as it travels through the digestive system. 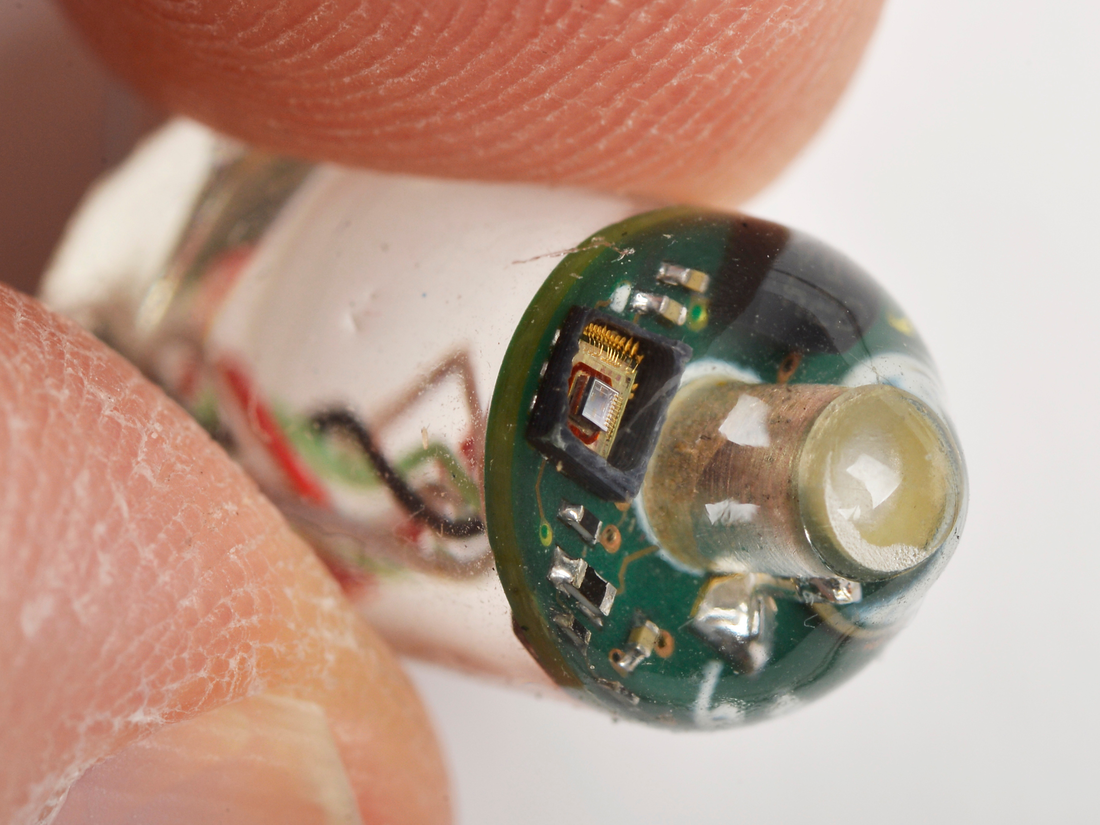 A group at MIT built this tiny package of sensors to collect vital signs as it travels through the digestive system. Albert Swiston/MIT hide caption 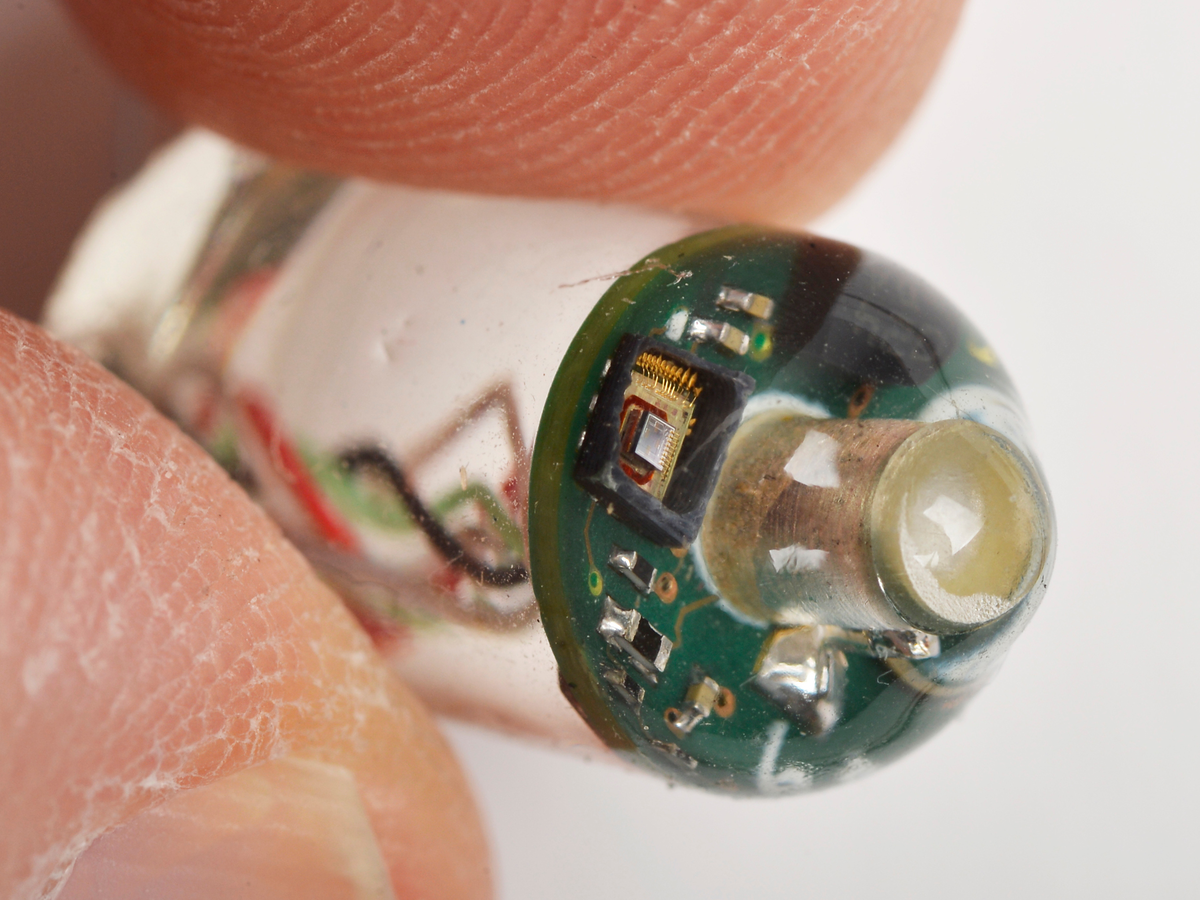 A group at MIT built this tiny package of sensors to collect vital signs as it travels through the digestive system.

After testing all the pieces of a tiny pill-size device, Albert Swiston sent it on a unique journey: through the guts of six live Yorkshire pigs.

Pig bodies are a lot like human bodies, and Swiston wanted to know whether the device would be able to monitor vital signs from inside a body. It did.

It's the latest in a small but growing group of devices that soldiers, athletes, astronauts and colonoscopy patients have gulped to collect information from odd recesses of the body. Swiston calls them "ingestibles."

Other, less complex devices are being used in humans to monitor core body temperature, to photograph innards and to keep track of prescription use. But each one of those can monitor only one measure at a time.

Swiston's tiny package monitors three at once. It includes a microphone, a thermometer and a battery with a long enough life to pass from mouth to rectum of whatever large mammal it's traveling through.

As it moves, tugged by the same forces that take food through the digestive system, one component gathers temperature, while a miniature microphone acts as a stethoscope, transmitting a recording of the heart and lungs (which, Swiston says, sounds something like "lub dub lub dub lub dub wooooohooo") to a wireless device that translates it into heart rate and respiratory rate.

The device is described in a proof-of-concept study published Wednesday in the journal PLOS ONE.

Swiston, a biomaterials scientist, and his colleagues work at the federally funded Lincoln Laboratory at the Massachusetts Institute of Technology. The group focuses on developing technology that will help monitor soldiers in extreme climates like Iraq and Afghanistan, where heat-induced health problems can cause liver damage, kidney failure and death.

"Trauma patients are a really clear winner here, because we can do vital sign monitoring without touching the skin," says Swiston. "You can't put an [electrocardiogram] on a burn victim if they don't have any skin to apply it to. You need that information but you can't touch them." But swallowing a pill-size device would be no problem.

The technology could be used to triage patients in an emergency room, Swiston says, by offering continuous information on patients who may be suffering from heart problems, for example.

Athletes could use it to monitor their bodies without bulky or chafing external equipment. Another view of the pill-size device developed by Albert Swiston and colleagues, the latest in a growing group of "ingestibles." Albert Swiston/MIT hide caption 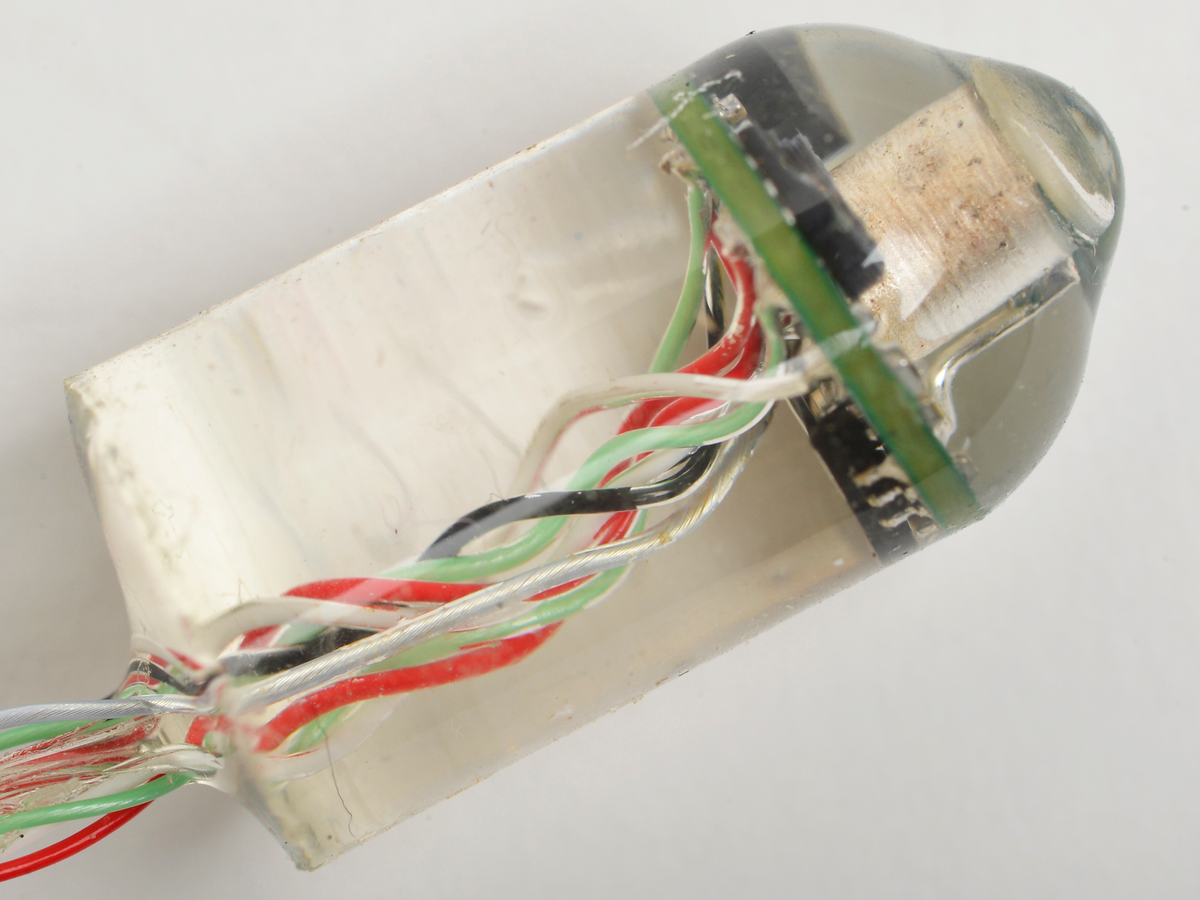 Another view of the pill-size device developed by Albert Swiston and colleagues, the latest in a growing group of "ingestibles."

And the device might be used to help identify heart problems in people who might have irregular heart activity for only a few seconds of any given day. Right now, such patients have to wear a Holter monitor — which requires sacrificing showers and occasionally chest hair.

Earlier ingestible devices have primarily been able to monitor only one thing at a time. The FDA-approved PillCam has been used for years to take photos of people's gastrointestinal tract. A more recently developed device is meant to be attached to a pill, allowing a physician to monitor how closely a patient is taking prescriptions. The most common use has been core body temperature monitoring.

The field of ingestibles got its start in the 1980s, when NASA and the Johns Hopkins Applied Physics Laboratory teamed up to develop a "thermometer pill" to record the core body temperature of astronauts as they work in spacesuits. The suits seal off a person from the extreme range of temperatures in space (from 250 degrees Fahrenheit on the sunny side to -250 degrees on the deep space side) but present a risk of overheating from body heat and humidity trapped inside the suit. The device successfully transmitted a signal from astronauts' bowels to NASA computers on Earth. They've also been used to monitor astronauts' circadian rhythms based on small changes in their core body temperatures.

"They're a really great research tool," says Reed Hoyt, whose group at the U.S. Army Research Institute of Environmental Medicine worked to develop a digital version.

Since then, the thermometer pill has been used in multiple military studies. A few in Iraq and Afghanistan investigated the heat strain on Marine rifle squads working in full combat gear in the summer. "There was evidence of significant heat strain during missions in Iraq during very hot weather," he says. The data, he says, contributed to incremental but important tweaks in operations, like lighter clothing and more rest breaks.

Hoyt says the military has ditched the idea of using the thermometer pills to keep track of large numbers of people. It's expensive, he says. After all, each one is about $50 and not meant to be reused. "It's in one end and out the other," he says.

But the military still uses the thermometer pill in applied research, like on teams that work with chemical or biological threats. It feeds a signal to a sleeve display showing the person's heat level on a scale of 1 to 10. "That information allows them to keep track of each other right there, but the information is also relayed back to the command post where the commander and medic could decide when to bring them out to rest, rehydrate and cool off," Hoyt says. The thermometer pill also contributed to an algorithm Hoyt's research group developed to predict core temperature based on heart rate.

After two football players died of heatstroke in 2001, some sports teams caught on to the technology. A representative of CorTemp, one of several manufacturers of thermometer pills, says the devices have been used to keep NFL athletes from heatstroke and to protect firefighters and divers from reaching dangerous core temperatures. Researchers in California are using them to monitor farmworkers. Others have used them to study sleep disorders by watching how a person's core body temperature fluctuates over the course of a day or night.

Sandra Fowkes Godek, an exercise physiologist at West Chester University, started using ingestible core body thermometers to research football players in 2002. She now monitors the Philadelphia Eagles during their preseason, when players are at a higher risk of heatstroke because their bodies haven't had time to adjust to strenuous activity in full pads in the heat.

She says players who have had problems with heat before or who will play a lot in hot weather swallow the $30 devices about six hours before practice, to give it enough time to make its way into the intestine. "It can't be in the stomach because the temperature will fluctuate because of what you're drinking," she says. During practice, Fowkes Godek walks around with a recorder the size of a cigarette pack, checking players' core body temperatures by bringing the device within a foot or so of their bodies.

"You just walk up to them and put the recorder right behind them. Each sensor has its own serial number and you correlate that with the jersey number," she says.

Despite the fact that some players with unusually efficient digestive systems sometimes excrete the things before practice, Fowkes Godek says the devices have been important tools in preventing heatstroke in individual players and in understanding the human body's heat limitations.

"I'm not allowed to put subjects in [an experimental] chamber in full football gear and get their temperature up to 105," even though that happens on the field, she says. The data helped the sports community understand that dehydration isn't the only reason a person overheats. "For so long we were pushing fluids on athletes," she says, thinking dehydration was the main culprit. "It's the intensity of exercise and the environmental conditions — that's what determines body temperature," she says.

If used in humans, Swiston's device, which costs about $70 to manufacture at this point, would add another layer to the capabilities of the devices Hoyt and Fowkes Godek have used for years.

Right now, Swiston says, one of the biggest challenges keeping these devices from larger acceptance is "the ick factor." "We don't have a lot of acceptance that you can just swallow something," he says. "But eventually the ick factor will go away."

The truly hardy have already shed it. The devices are not meant to be reused, says Swiston, since that would require retrieving them from excrement. But, he says, some Marines "will wash it off with a little bit of Coca-Cola and then swallow it again."

An earlier version of this article said that Johns Hopkins University teamed up with NASA to develop a thermometer "pill." The correct name of the organization is the Johns Hopkins Applied Physics laboratory.