Accessibility links
Mothers Who Lost Children To Opioids Unite To Change Laws : Shots - Health News Women whose children have become addicted to opioids are working to change laws around the country. They seek improved access to treatment and reduced stigma.

Listen: on the scene with Moms United by the White House

2:09
Mothers Who Lost Children To Addiction Unite To Change Laws 2:09

Mothers Who Lost Children To Addiction Unite To Change Laws

Lafayette Square across from the White House is a popular spot for people with a political bone to pick. Next to the persistent "ban nuclear weapons" sign, protesters come here to picket in front of the president's home. On Wednesday, there's a group of women gathered behind a banner scrawled with messages, among them: "Remembering those who lost their lives to the war on drugs." "Keeping faith, hope, and love in our hearts."

Listen: on the scene with Moms United by the White House 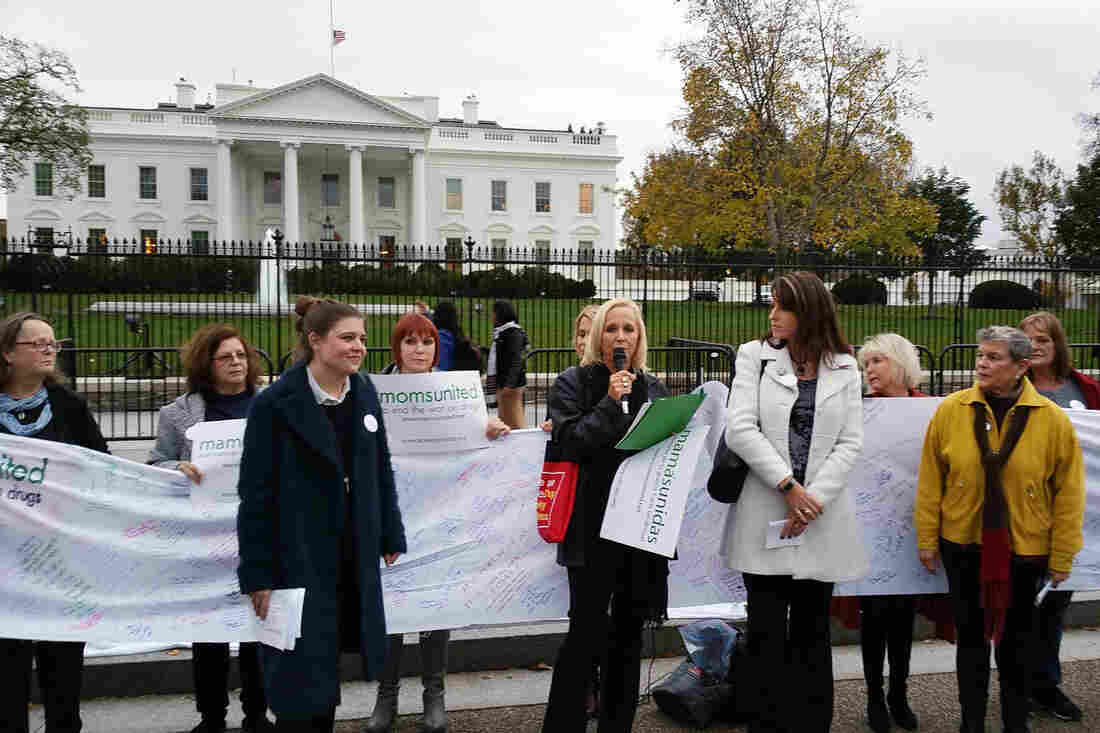 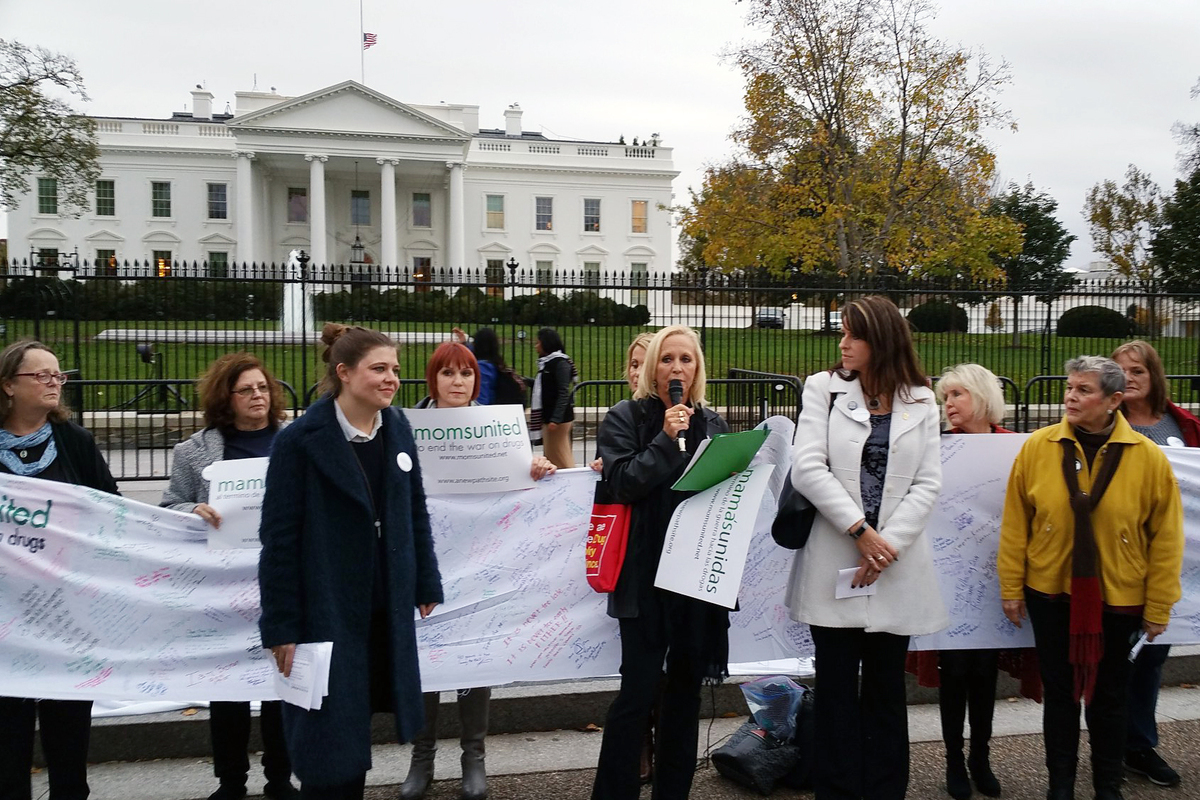 Gretchen Burns-Bergman (center) speaks Wednesday at a rally in front of the White House about ending mass incarceration of drug users.

This is Moms United to End the War on Drugs. Gretchen Burns-Bergman, 68, from San Diego, Calif., stands with three other women in front of the banner. She holds a microphone in one hand and signage in the other. "We're here to say, 'Ask Mom about the casualties of the drug war,' " she says into the loudspeaker. "The war on drugs is a war waged on families — our own families. We call for a focus on saving lives and ending mass incarceration."

Unlike Mothers Against Drunk Driving, Moms United is not a formal organization. Rather, it's cobbled together from several different small nonprofits and individuals based in 26 states and around the world — starting with Burns-Bergman's own organization, A New PATH (Parents for Addiction Treatment and Healing) based in Rancho Santa Fe, Calif. The Moms United campaign has been trying to push for two basic things: long-term support for recovering addicts and less stigma around drug use and addiction.

Her two sons are both recovering heroin addicts, and she says when her sons' lives were in danger, things changed for her. "You start thinking differently. The idea is you have to keep these young people alive so that they can find recovery. Dead people don't recover. That's the bottom line."

One of the women here, 62-year-old Denise Cullen from Orange County, Calif., says her son died because of the stigma associated with drug abuse. When her son, Jeff, tried to go on methadone to treat his heroin addiction, she wasn't supportive. She thought it was for people who had bad families. "He could be alive right now if he was on methadone or Suboxone [drugs used to treat opiate addiction]. My kid had what he called the fairy tale life, so it was like, why is he doing this?" Cullen says. "When I learned how wrong I was, it is really hard for me to know that he could be here and he's not."

Many of the women in Moms United to End the War on Drugs have been advocating for increased access to treatment options like methadone or naloxone, used to treat opiate overdoses, for years — sometimes decades. Now, they say that things are finally changing. President Obama recently increased funding for access to naloxone, and recently the Senate introduced a bill targeting addiction treatment and recovery.

Some of this change may have been helped along by the Mothers United campaign. Burns-Bergman says the group advocated for naloxone access laws and 911 Good Samaritan laws that passed in Florida and California, and they met this week with Michael Botticelli, director of the White House Office of National Drug Control Policy. They're gunning for the same sweeping, national success that Mothers Against Drunk Driving has had.

But the Moms United campaign isn't the multi-million-dollar entity that is Mothers Against Drunk Driving. They don't have the same lobbying power or the numbers or name recognition, even after five years of organizing. Part of that may be because of stigma, or because the policy solutions are a lot more complicated. What the campaign does have is a lot of conviction and camaraderie. The women joke and laugh and hug one another tightly.

On the sidewalk behind them, a group of teenagers take selfies with the White House. The Moms United loudspeaker booms out to a nearly empty street. These mothers don't seem to be bothered, though. They have each other, and they're going to keep pushing for what they want.