Accessibility links
Flu Myths Busted: Getting The Shot Won't Make You Sick And 30 Others : Shots - Health News If you've ever wondered if the flu shot can give you the flu, you're not alone. We fact check the most common flu myths for you and provide the lowdown on this year's vaccine. 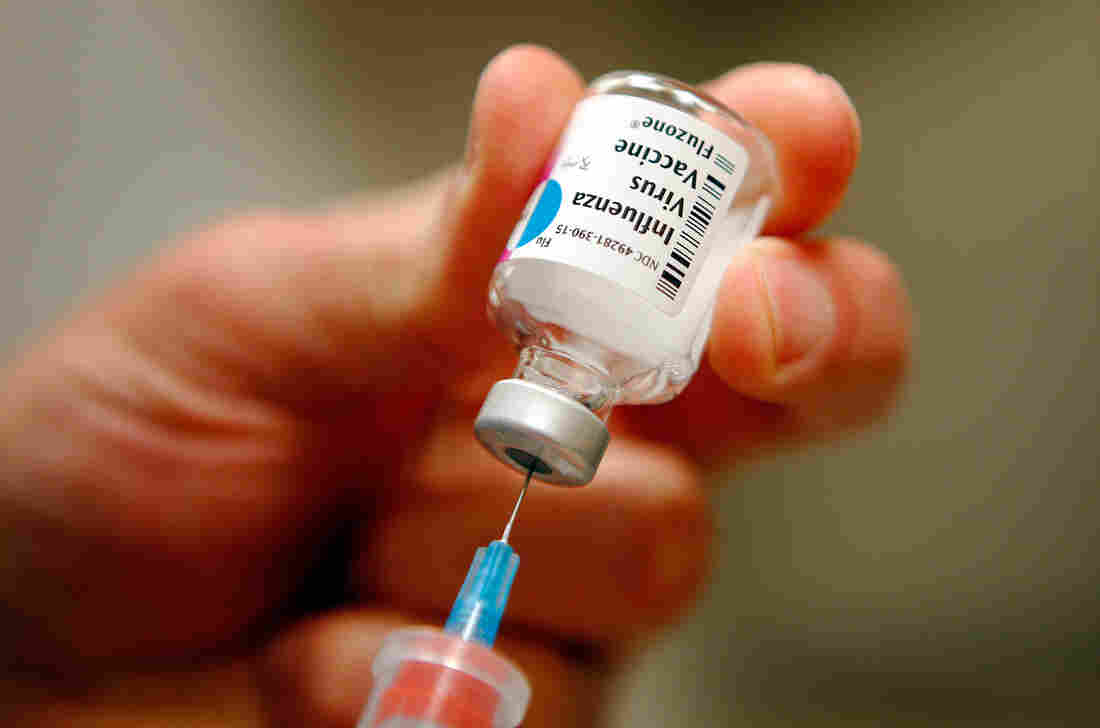 A nurse prepares an injection of the influenza vaccine at Massachusetts General Hospital in Boston in 2013. Brian Snyder/Reuters/Landov hide caption 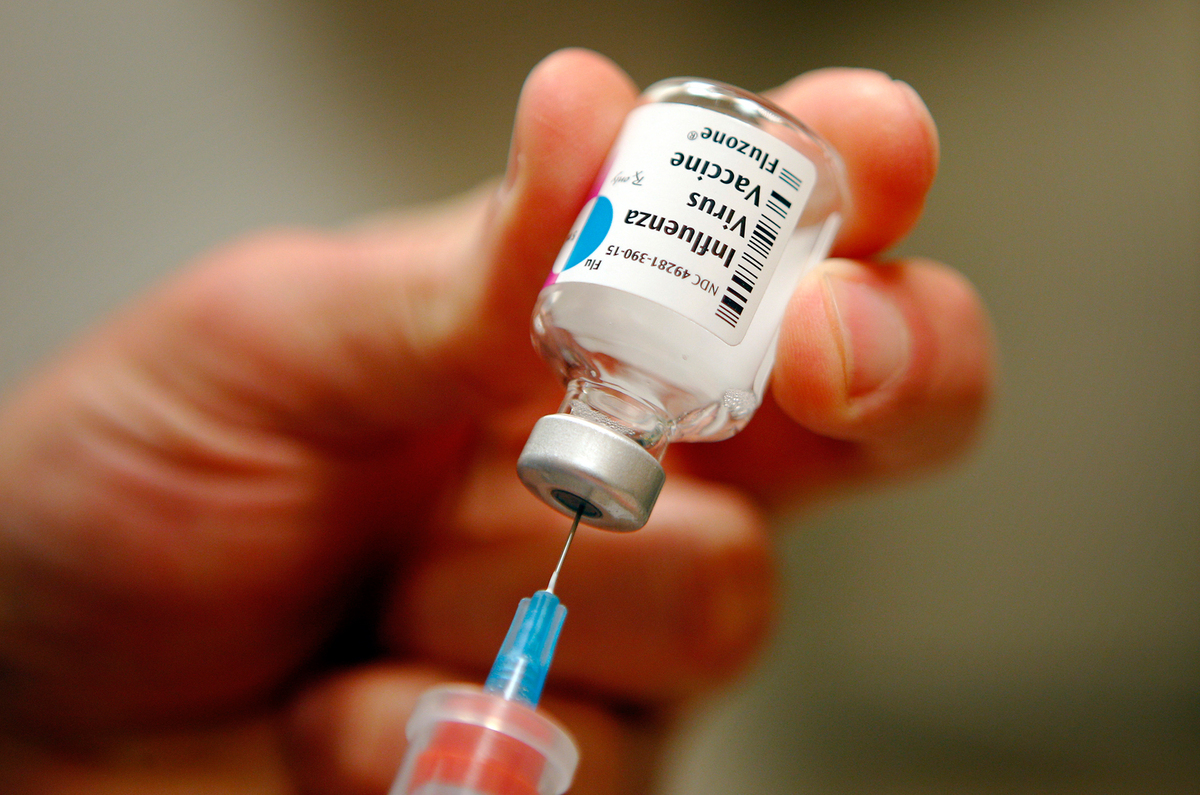 A nurse prepares an injection of the influenza vaccine at Massachusetts General Hospital in Boston in 2013.

Every year before influenza itself arrives to circulate, misinformation and misconceptions about the flu vaccine begin circulating. Some of these contain a grain of truth but end up distorted, like a whispered secret in the Telephone game.

But if you're looking for an excuse not to get the flu vaccine, last year's numbers of its effectiveness would seem a convincing argument on their own. By all measures, last season's flu vaccine flopped, clocking in at about 23 percent effectiveness in preventing lab-confirmed influenza infections.

But that's not the whole story, said Lisa Grohskopf, a medical officer in the influenza division of the Centers for Disease Control and Prevention.

"Twenty-three is better than zero, but the 23 percent was overall. If you were one of the people who got an influenza B strain, it was closer to 60 percent," she said. "Even if it's not going to work against one virus very well, there are other viruses circulating."

Each year's flu vaccine contains three (trivalent) or four (quadrivalent) strains of the flu, selected in February by the World Health Organization and then endorsed by the Food and Drug Administration, as the ones experts expect will circulate in the coming flu season. They choose one H1N1 strain, one H3N2 strain and one B virus strain, either from the Yamagata lineage or the Victoria lineage. Quadrivalent vaccines contain a B strain from each lineage.

"Viruses in the Yamagata lineage or in the Victoria lineage are different enough that there's not a lot of cross-protection," Grohskopf said. "So if, say, we have a vaccine that contains a Yamagata family virus one season and it ends up being a predominantly Victoria season, we might not get very good protection against B strains."

But sometimes the experts' predictions are off the mark, and sometimes a strain they select mutates before the season arrives. Last year, the H3N2 strain they chose was a poor match, and that strain dominated the season, though B viruses became more common toward the end, Grohskopf said. Adjustments were made in the vaccine for the H3N2 virus this year.

"There's definitely reason to be hopeful that it's going to be better this year, but it's a little too early to tell," Grohskopf said. "Flu seasons can be very variable in terms of how fast they take off, but right now activity is still fairly light."

The flu vaccine options this year haven't changed much from last year, with two exceptions. The recombinant flu vaccine, made without the virus and without eggs, is now approved for all adults age 18 and older (instead of just those ages 18 to 49). And the intradermal vaccine, a low-dose vaccine that uses a shorter needle and injects only into the skin, is now available as a quadrivalent vaccine instead of just trivalent.

The CDC does not recommend any one vaccine over another. "We really just think it's important that people get vaccinated, and depending on where you are, you may not be able to get a particular product," Grohskopf said. "We don't want to hunt for one thing and then not get vaccinated until it's too late and flu is already peaking for the season."

Getting vaccinated against flu is particularly important for several at-risk groups and people in frequent, close contact with those at-risk groups, Grohskopf said. The populations at the highest risk of serious complications from the flu include pregnant women, people age 50 and older and children under age 5, particularly under age 2, she said.

Anyone with a chronic medical condition, such as lung disease, heart disease, kidney disease, liver disease or a neurological condition also has a higher risk of serious complications with an influenza infection. Those at risk of infecting more vulnerable people include parents of young children, day care workers, teachers, caretakers of elderly individuals and anyone working in health care.

But the problem with limiting flu immunization to these groups, she said, is that the flu is a tricky bug — and unpredictable.

"While some people are definitely at higher risk for severe disease if they get the flu, sometimes even generally healthy, young people — older children, younger adults who are the most hardy folks if they don't have any other chronic illnesses — can get really sick, hospitalized and even die, and we can't really predict who those folks are going to be," Grohskopf said. "The majority of people who get the flu are going to feel really crummy for a time and then recover without any problems." But even those folks lose work time and risk spreading the disease to family members and others, she said.

Another monkey wrench this year is additional evidence, reported at Stat, that getting a flu shot every year might reduce its effectiveness in warding off the flu. This evidence isn't entirely new, and scientists still don't entirely understand it, but it also doesn't mean that skipping the flu shot this year is wise if you got it last year.

In the meantime, for those who still haven't gotten the vaccine this year, make sure it's not because of one of the concerns below. As described in the links, each of these misconceptions is based on inaccurate information, a misunderstanding or an exaggeration.

Concern No. 1: Can getting the flu vaccine give you the flu or make you sick?

Fact: The flu shot can't give you the flu

Concern No. 2: Do I really need to get the flu vaccine this year if I got it last year?

Fact: For now, a new flu shot each year is still recommended

Concern No. 3: Could getting the flu vaccine make it easier for me to catch viruses, pneumonia or other infectious diseases?

Fact: Flu vaccines reduce the risk of pneumonia and other illnesses

Concern No. 4: Isn't the flu shot just a "one size fits all" approach that doesn't make sense for everyone?

Fact: You have many flu vaccine options, including egg-free, virus-free, preservative-free, low-dose, high-dose and no-needle choices

Concern No. 5: Can the flu shot cause death?

Fact: There have been no confirmed deaths from the flu shot

Concern No. 6: Aren't deaths from the flu exaggerated?

Fact: Deaths from influenza range from the lower thousands to tens of thousands each U.S. flu season

Concern No. 7: Aren't the side effects of the flu shot worse than the flu?

Fact: Flu shot ingredients do not pose a risk to most people

Concern No. 9: Shouldn't pregnant women avoid the flu shot or only get the preservative-free shot? Could the flu vaccine cause miscarriages?

Concern No. 10: Can flu vaccines cause Alzheimer's disease?

Fact: There is no link between Alzheimer's disease and the flu vaccine; flu vaccines protect older adults

Fact: Vaccines make up a tiny proportion of pharma profits. That makes it possible for them to continue making them in the event of a pandemic

Concern No. 12: Flu vaccines don't really work, do they?

Concern No. 13: But flu shots don't work in children, do they?

Concern No. 14: Can flu vaccines cause vascular or cardiovascular disorders?

Concern No. 15: Can vaccines can break through the blood-brain barrier of young children and hinder their development?

Fact: Flu vaccines have been found safe for children 6 months and older

Concern No. 16: Will the flu vaccine cause narcolepsy?

Fact: The U.S. seasonal flu vaccine does not cause narcolepsy.

Concern No. 17: Can the flu vaccine weaken your body's immune response?

Concern No. 18: Can't the flu vaccine cause nerve disorders such as Guillain-Barré syndrome?

Fact: Influenza is more likely than the flu shot to cause Guillain-Barré syndrome.

Concern No. 19: Can the flu vaccine make you walk backward or cause other neurological disorders like Bell's palsy?

Fact: Neurological side effects linked to flu vaccination are extremely rare (see Concern No. 18), but influenza can cause neurological complications. Fact: The flu shot has not been shown to cause Bell's palsy.

Concern No. 20: Don't people recover quickly from flu since it's not really that bad?

Concern No. 21: Can people die from the flu even if they don't have another underlying condition?

Fact: Otherwise healthy people DO die from the flu

Concern No. 22: Can people with egg allergies get the flu shot?

Fact: People with egg allergies can get a flu shot

Concern No. 23: Can't I just take antibiotics if I get the flu?

Concern No. 24: Since I got the flu last time I got a flu shot, that means it doesn't really work for me personally, right?

Fact: The flu shot cannot guarantee you won't get the flu, but it reduces the risk of catching it

Concern No. 25: But I don't need the shot since I never get the flu, right?

Fact: You can't predict whether you'll get the flu

Concern No. 26: Can't I protect myself from the flu by simply eating right and washing my hands regularly?

Concern No. 27: Won't getting the flu simply make my immune system stronger?

Fact: The flu weakens your immune system while your body is fighting it and puts others at risk

Concern No. 28: If I get the flu, why won't just staying home prevent me from infecting others?

Fact: You can transmit the flu without showing symptoms

Concern No. 29: Can having a new vaccine each year make influenza strains stronger?

Fact: There's no evidence flu vaccines have a major effect on virus mutations

Concern No. 31: Is there any point in getting a flu shot if I haven't gotten one by now?