Accessibility links
Death Haunts A Football Player Years After The Fatal Hit : Shots - Health News At least 19 young football players have died so far in 2015. Pediatricians are calling for changes in the way the game is played, including a move to non-tackle games.

We know more than ever about concussions, the permanent brain damage of chronic traumatic encephalopathy and the other physical risks of football.

Yet so far this year, at least 19 students have died playing football, according to the University of North Carolina's National Center for Catastrophic Sport Injury Research. 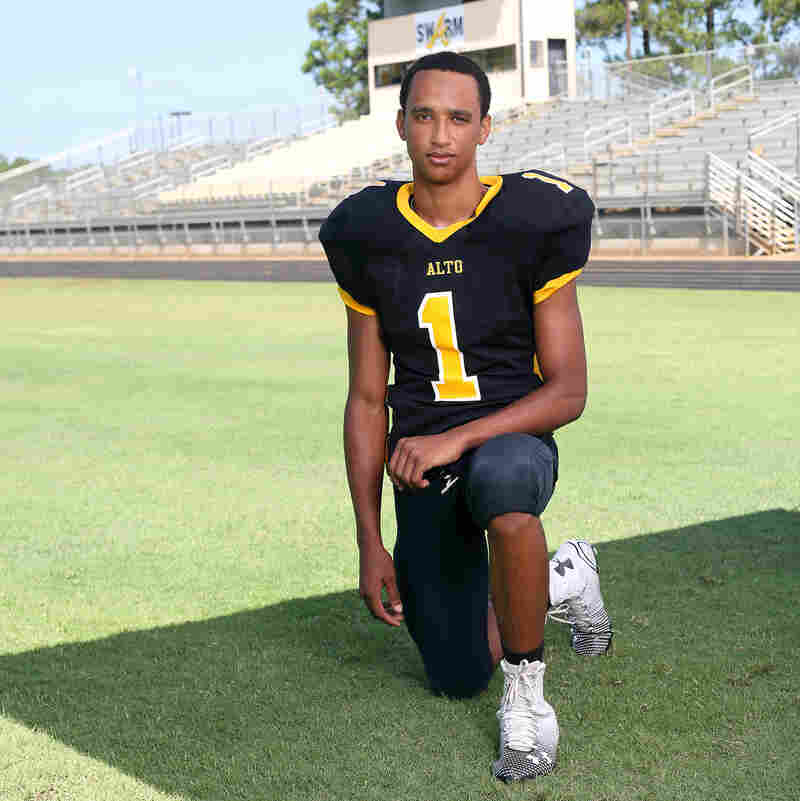 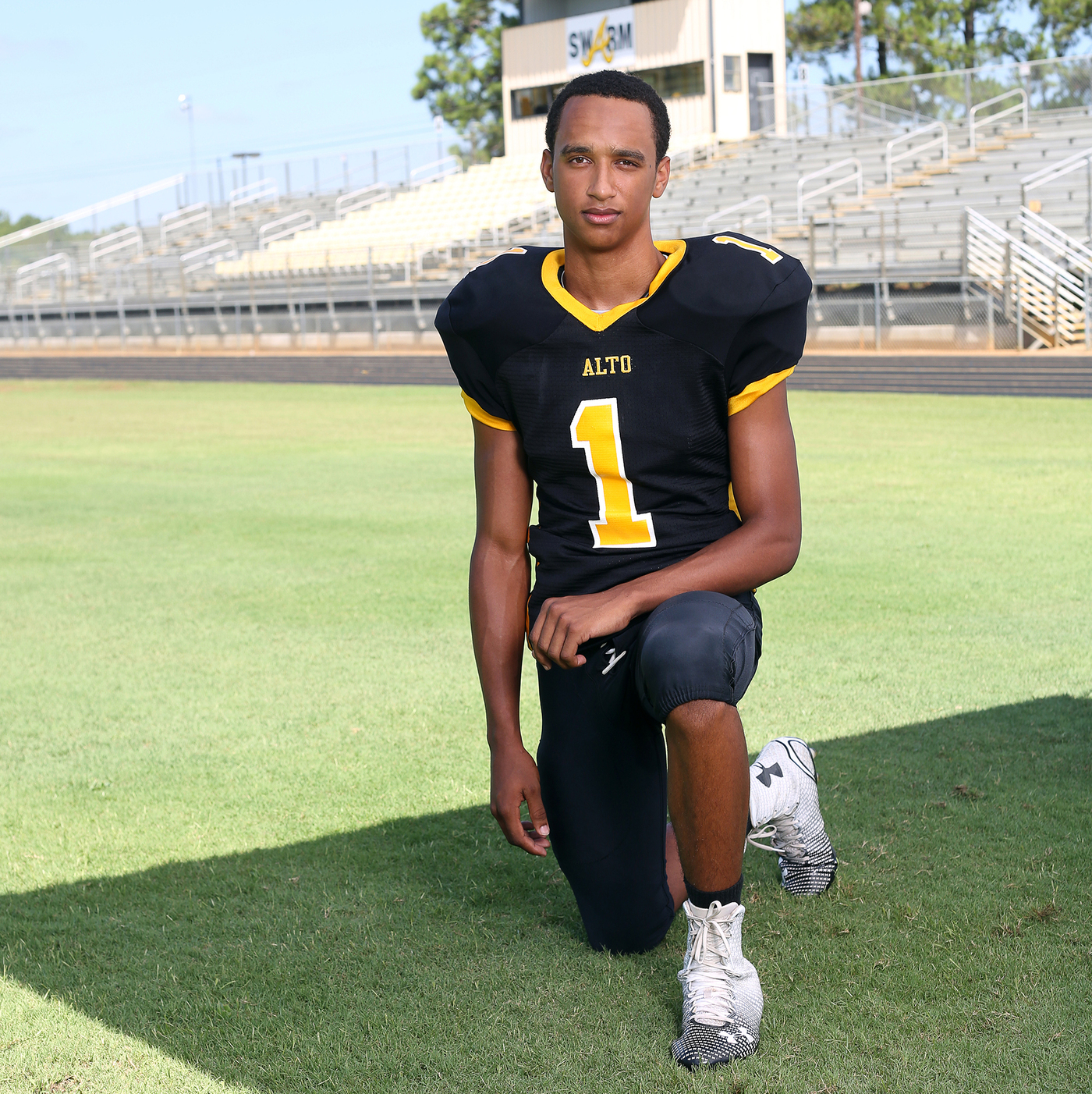 Cam'ron Matthews played safety on the Alto, Texas, varsity football team. The 16-year-old died after a game in October.

Though participation is slowly declining, football is still the country's most popular high school sport. Over a million high schoolers played last season.

Researchers at UNC have been tracking football-related deaths since the 1960s. Director Kristen Kucera describes two main tallies: deaths caused directly by football, like a broken spine or brain trauma, and those that are indirect like heat stroke or sudden cardiac arrest that occurred during a game or practice.

The good news is that there are fewer fatalities than there used to be. Back in the 1960s, around 30 or 40 players died each year. Then came a steep decline thanks to new safety measures: a standardized helmet that must be certified for use in a game; a rule banning headfirst tackling; and improvements in athletic medical care.

But instead of dropping to nil, the number of football-related fatalities leveled off in the 1990s. Since then, a persistent average of about four or five football players have died each year as a direct result of playing their sport, along with an average of 10 or so indirect fatalities.

When asked why the numbers have leveled off instead of reaching zero, Kucera hesitates. "That's a great question," she says. "That's what we're working really hard to figure out."

One player who died this year was Cam'ron Matthews, a 16-year-old from Alto, Texas.

On a Friday night in November, one month after Matthews died, the Alto Yellowjackets bounded out of their black-and-yellow inflated tent through an artificial cloud of mist and onto the field. There was no trace of sadness. They were focused on winning.

Alto is a small town of about 1,200, and on Friday nights it feels like everyone comes to watch the boys play. Some parents like Misty Collins get there early to stake out a spot on the metal bleachers. Collins was there Oct. 16, when Matthews told the coach he felt dizzy, then collapsed on the sideline.

"We just all prayed," she remembered. "We prayed that he was going to be OK, but the good Lord took an angel that was down here on Earth."

That's how people who knew Matthews talk about him. The 6-foot safety was one of the team's captains. He was the only junior elected.

"He's our number one, that was his jersey number," Collins said. "He was an awesome student, and very polite, and anything that came out of his mouth was 'Yes, ma'am' and 'No, ma'am.' He was an awesome guy."

After he collapsed, medics took Matthews to a hospital in East Texas, where he died the next day.

Doctors told the family he likely died from a burst brain aneurysm, though they're still waiting for an autopsy to confirm that.

A fatal aneurysm could be related to football or other vigorous activity, according to Robert Cantu, a neurosurgeon in Concord, Mass., who specializes in football injuries. That activity could cause an aneurysm, which is a weak area in the wall of an artery, to burst, which in turn could cause dizziness, collapse and death. Aneurysms can run in families, but are "very uncommon" in 16-year-olds, Cantu says.

Matthews' friend and teammate Keenan Johnson said it's been hard to get back in the groove. But instead of falling apart, he says, the team has pulled together. 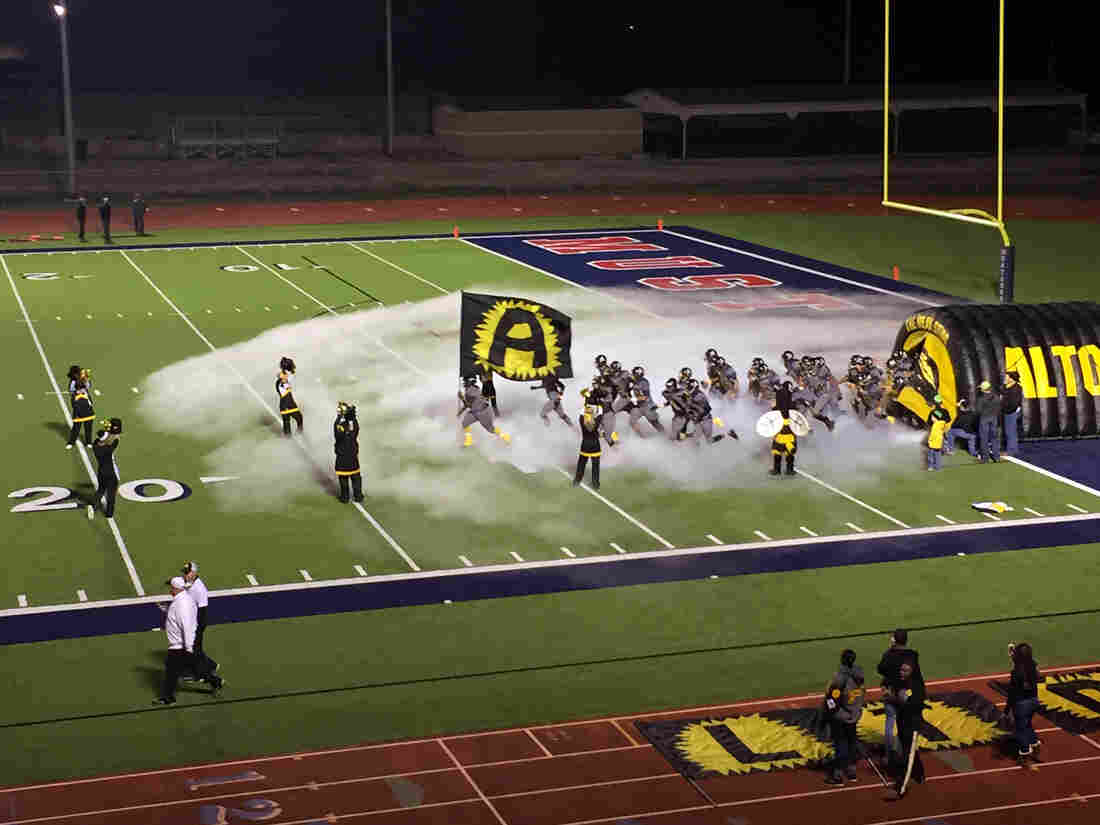 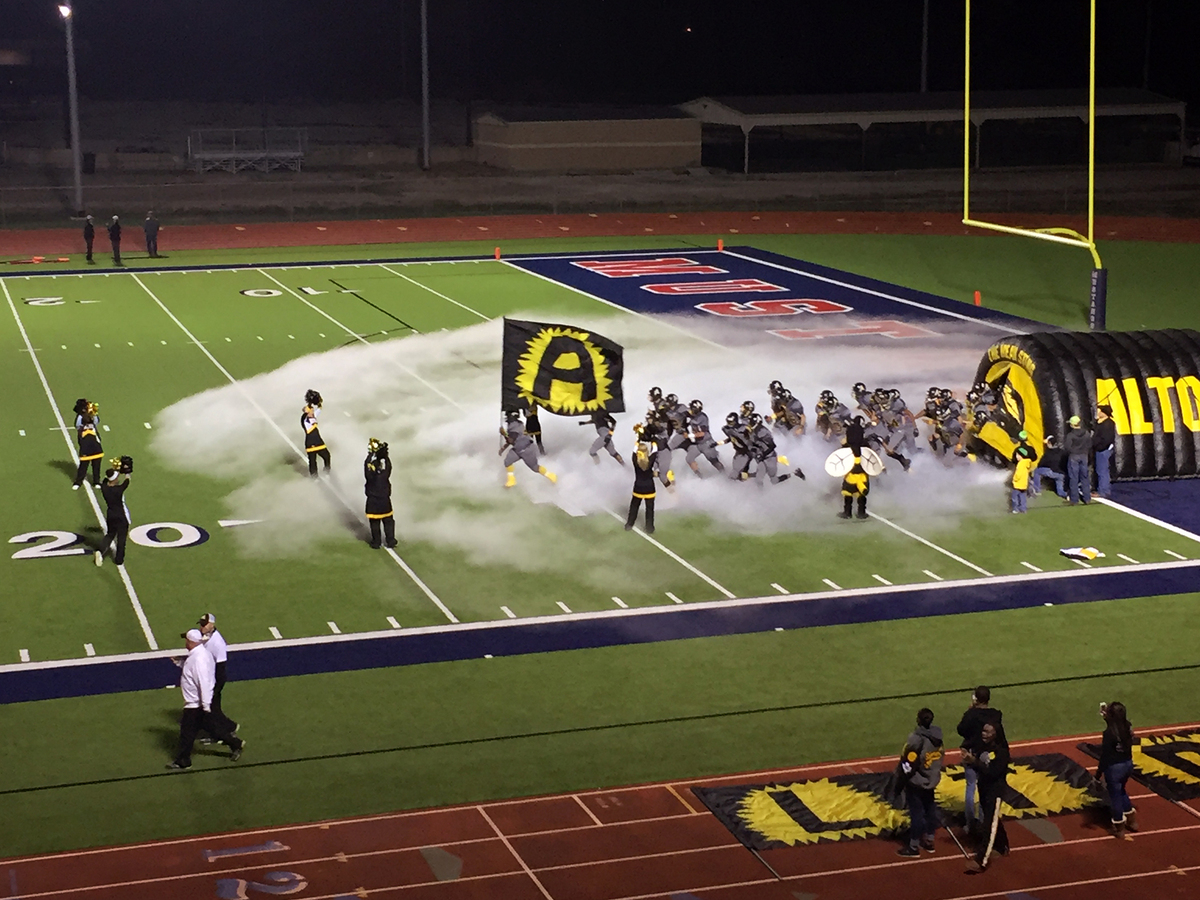 The Alto Yellowjackets take the field on Nov. 13, a month after Matthews died.

"It hurts that he's not here," Johnson says. "He's one of my closest friends, and we worked out all summer. But we dedicate it to him. We're trying to win the state championship for him, be number one for him."

In the playoff game in November, the Yellowjackets faced a longtime rival – the Groveton Indians. And Matthews was on the sidelines, in a way. His number 1 jersey was perched on a wooden hanger. His sister Paige sat in the bleachers at the 50-yard line. The team won 63 to 14.

Parents rushed onto the field to thank head coach Paul Gould. Gould says he's proud of how the players are handling their teammate's death.

"I think they're doing probably about as good as possible, but this is something they're going to deal with for the rest of their lives," he says.

Gould knows parents are concerned about injuries associated with football, especially concussions. This year the governing body for high school sports in Texas says it will start counting concussions for the first time.

This month, the American Academy of Pediatrics made new recommendations about safety and urged players to consider "whether the benefits of playing outweigh the risks of possible injury." The AAP is urging the expansion of non-tackle leagues like flag football and calling for athletic trainers to be present during practices and games. Only 37 percent of high school nationwide have a full time athletic trainer on staff.

Two University of Minnesota professors have gone even further, calling for the elimination of tackle football programs from public schools altogether.

After Matthews died, Gould says not a single parent pulled their kid from the team. He hopes what happened doesn't fuel negative ideas about the game.

"I can say this: What football teaches kids for the rest of their life, in my opinion, is priceless," Gould says. "I mean, it teaches you to deal with things. This situation is definitely teaching our kids to deal with things as they move forward." 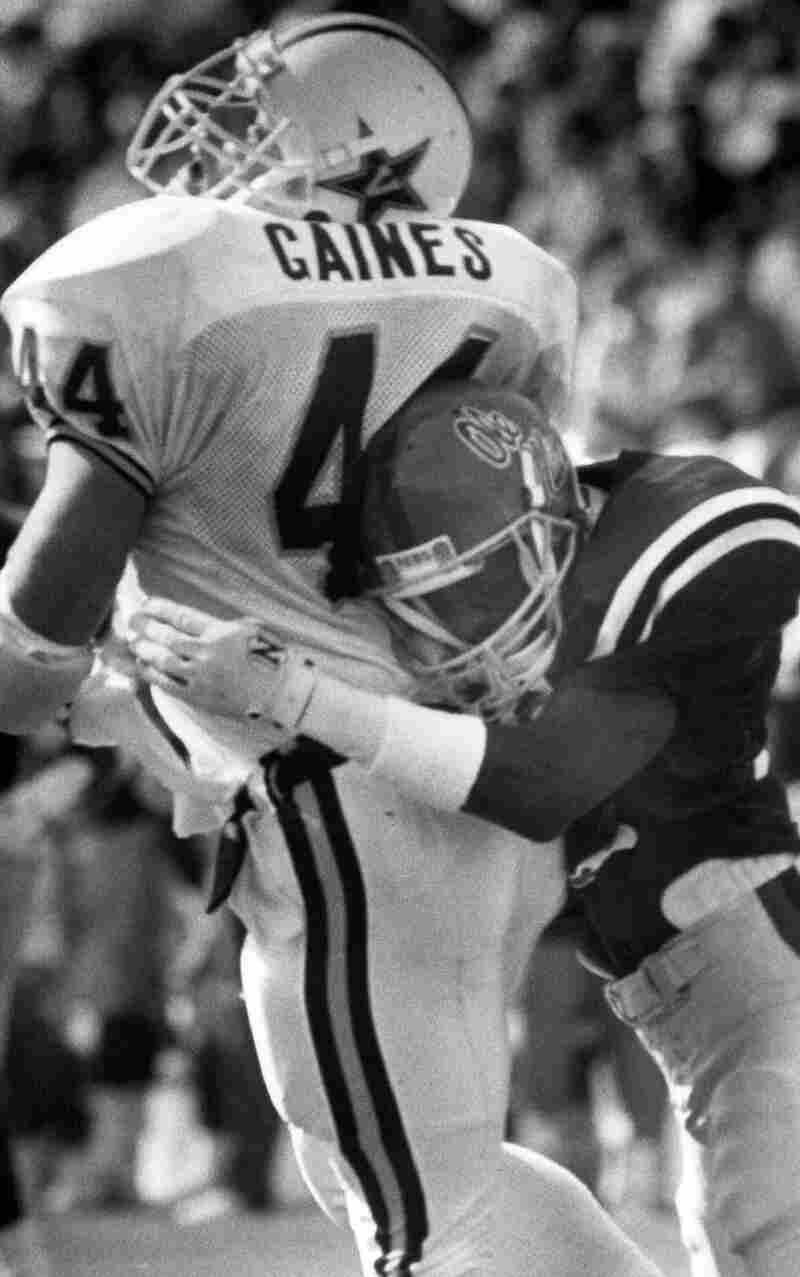 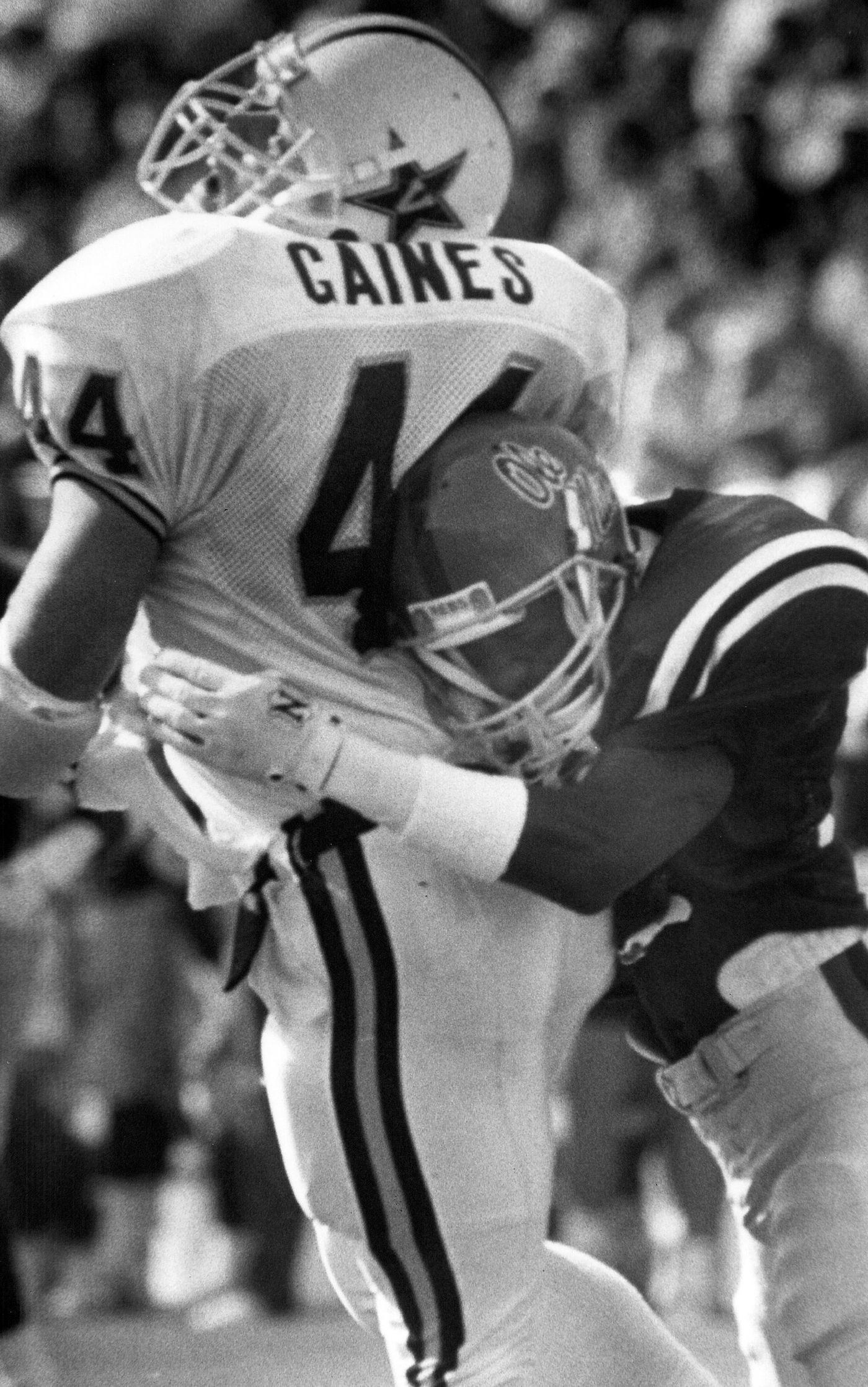 But players who have been involved in a fatal play say the experience will haunt them forever.

Back in 1989, Brad Gaines was a star running back at Vanderbilt University. Then came October 28, a date Gaines will never forget. It was a must-win game at Ole Miss in Oxford.

Vanderbilt received the opening kickoff and drove down the field. On third and goal at the 12-yard line, Gaines and the Commodores lined up for a play designed to pass the ball to Gaines.

The ball snapped and his quarterback threw the pass. An Ole Miss linebacker was close on Gaines's tail.

"As soon as the ball reaches me, reaches my hands ... bang!" Gaines remembers. "Just a fantastic hit from the back, and breaks up the pass, and [the linebacker] just makes a great play."

Gaines headed back to the sideline, then noticed the linebacker hadn't yet gotten back up. At first, Gaines thought this was another of football's routine injuries. A sprained ankle, maybe. But five minutes went by. Ten minutes. The linebacker was still lying on the field, surrounded by trainers and medical staff. Maybe a broken arm, Gaines thought.

Finally Gaines realized it was something more serious when a helicopter ambulance arrived to take the linebacker to Memphis, about 70 miles away.

Later he learned the linebacker's name — Chucky Mullins — and his injury: Mullins had broken his spine and could not move any of his limbs.

"The only thing I knew was you strapped up your cleats before practice, you went out and played and it was fun. I didn't know that there was this other part to this game," says Gaines, now 48 and living in Nashville, where he works in health care.

Against the advice of his coach and a psychologist, Gaines decided to visit Mullins in the hospital. He was scared to death, petrified, he says, and not prepared for what he saw when he walked in: a much skinnier Mullins, with "cords, tubes, things hanging out of him."

Mullins's guardian was there, and told Gaines that Mullins had something he wanted to tell him.

Gaines leaned over to hear Mullins whisper through his tracheal tube: "It's not your fault."

"And oh my goodness," Gaines remembers. "It's tough saying it now, but I tell you, it was a total selfless act on his part. I don't know if I could have done that."

Gaines and Mullins remained friends for the following year and half, until Mullins died of complications in 1991. Every year still, he drives to Mullins's grave on October 28, the anniversary of the game, and on Christmas.

Today, Gaines regularly receives phone calls from players like him — players, often teenagers, who make a routine play or tackle that ends with an opponent's death. Gaines is one of few people they can turn to who actually understands what they're going through, and he's happy to help.

"What I learned from Chucky Mullins was that selfless nature. It's not about me. It's not about Brad Gaines. I can help people. So if somebody calls me and asks me that's going through something like this, or needs some advice, or counsel, then that's my duty."

Gaines thinks the game is safer today, thanks to things like better concussion protocol and the new kickoff positions that mean fewer kickoff returns. But he still calls himself a football purist. He says he couldn't tell his 11-year-old son not to play football.