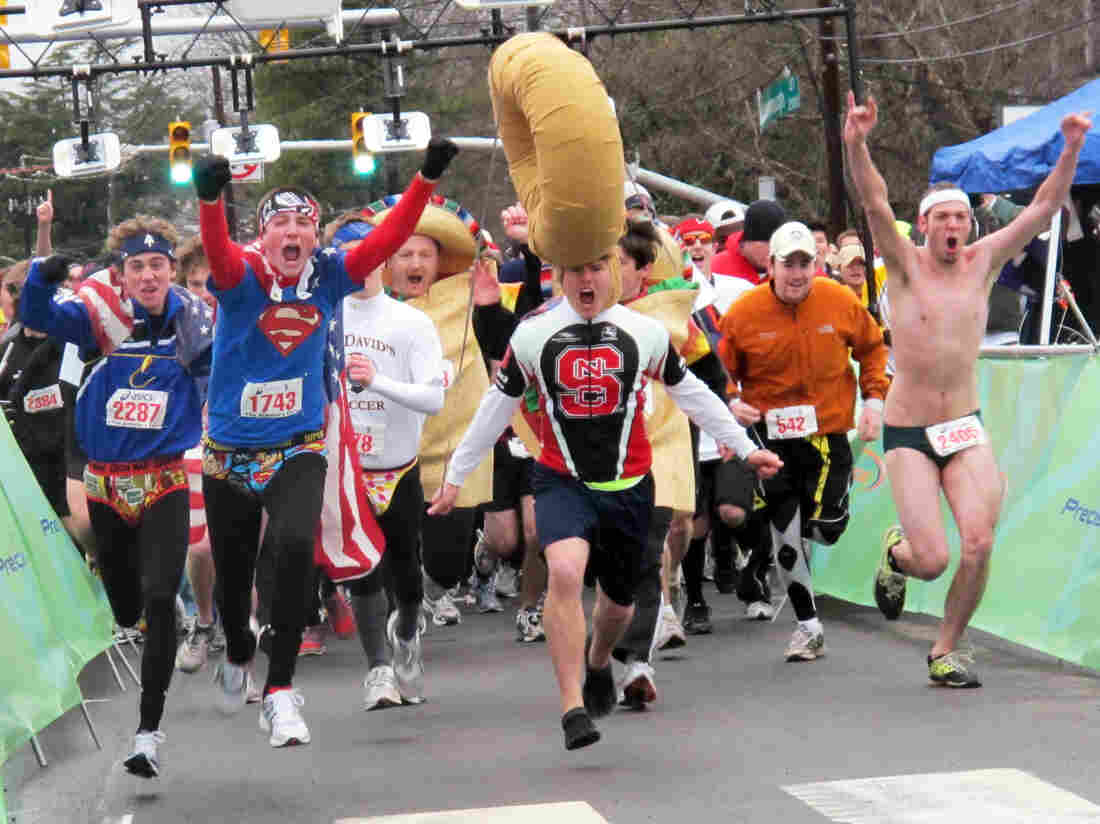 A view from the starting line of the sixth annual Krispy Kreme Challenge in Raleigh, N.C., in 2010. The local children's health clinic takes its name from this annual charity race, which draws about 8,000 participants each year. Courtesy of Dustin Bates hide caption 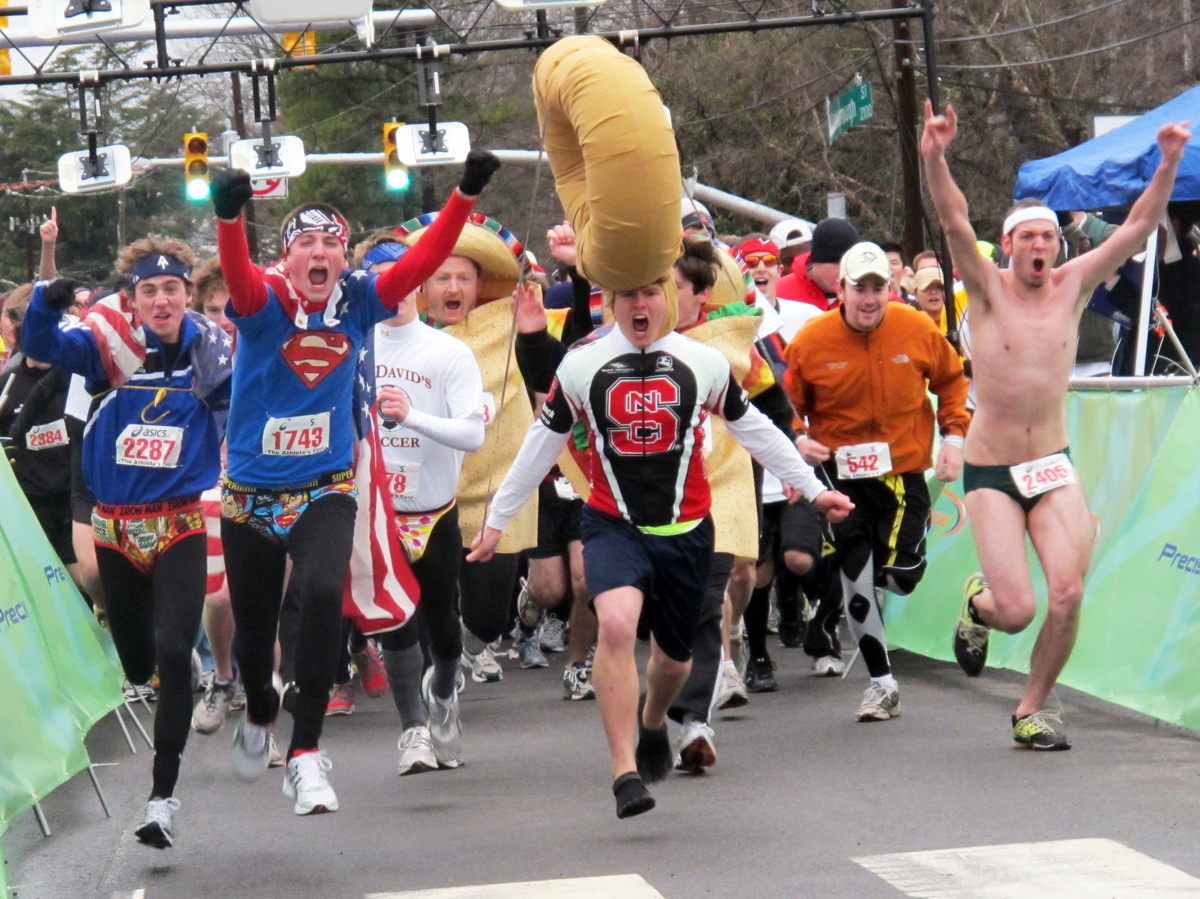 A view from the starting line of the sixth annual Krispy Kreme Challenge in Raleigh, N.C., in 2010. The local children's health clinic takes its name from this annual charity race, which draws about 8,000 participants each year.

The name that UNC Health Care is giving its children's clinic in North Carolina has been raising a lot of eyebrows. The facility is slated to be renamed the Krispy Kreme Challenge Children's Specialty Clinic. But criticism from the medical community at the University of North Carolina and elsewhere is making the health care system rethink that choice.

Since the announcement last month, Barry Popkin, a nutrition professor at UNC-Chapel Hill, says he's heard from a lot of colleagues wondering, "What the heck is going on at UNC?" The clinic in question is actually about 25 miles away, in Raleigh — home to North Carolina State University.

"For them to name it this way — to give advertisement to a very unhealthy food, high in added sugar and unhealthy fats and refined carbs with no nutritional value — was quite surprising to people around the nation," Popkin says. 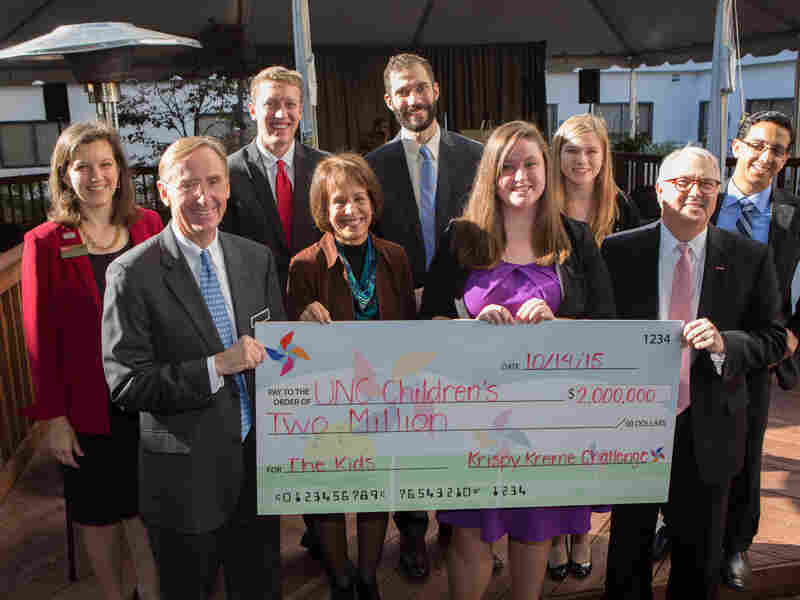 In October the student group behind the Krispy Kreme Challenge, an annual charity race in Raleigh, N.C., pledged to raise a total of $2 million for the race's namesake clinic and UNC Children's Hospital. Brian Strickland/UNC Health Care hide caption 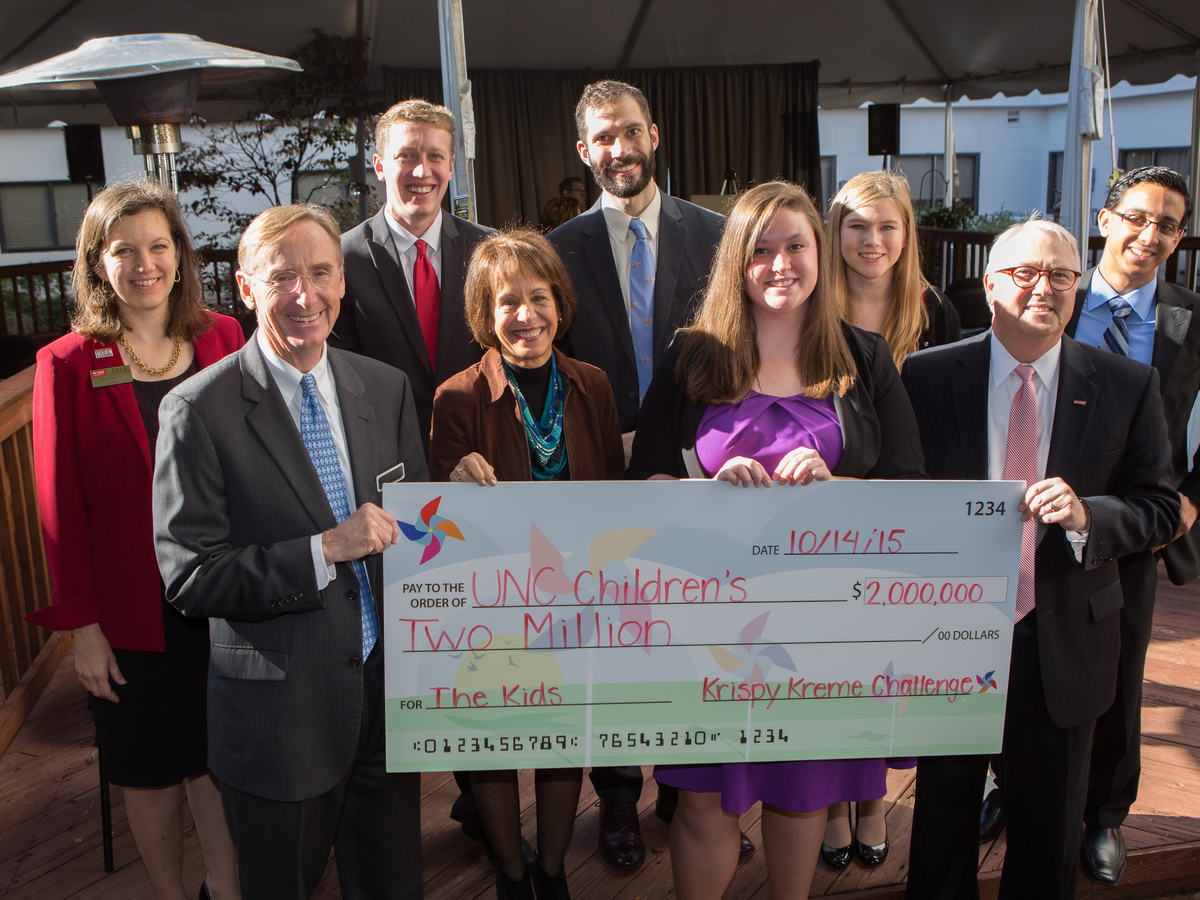 In October the student group behind the Krispy Kreme Challenge, an annual charity race in Raleigh, N.C., pledged to raise a total of $2 million for the race's namesake clinic and UNC Children's Hospital.

For the Krispy Kreme company, the advertisement is both free and unintentional. Leslie Nelson, head of fundraising and communications at UNC Children's Hospital, says the clinic – and the race — are in no way sponsored by the doughnut maker, which is based in Winston-Salem.

"The corporation is definitely not part of the name," she says. "It's named for a race! The name of the doughnut happens to be in the name of the race. But at the heart of it, it's about the race and about these kids."

The Krispy Kreme Challenge is an annual, 5-mile charity race that student volunteers at NC State University created about a decade ago, initially just for fun, and then to raise money for the hospital. The event, always held in February, has grown in size over the years, and now includes about 8,000 runners.

Chris Cooper, a junior in chemical engineering and economics at NC State, is the current executive director of logistics for the race, which does involve eating doughnuts.

"You run 2.5 miles, starting at the NC State Belltower," Cooper explains, "and then the challengers eat a dozen doughnuts," which they pick up mid-way, at stations set up in front of the local Krispy Kreme shop.

But most of the runners raise money without scarfing down fried sweets.

"The casual runners normally just pick their doughnuts up and keep running," Cooper says. "And then you run 2.5 miles back to the Belltower." The students got permission from the pastry company to use the Krispy Kreme name — but they pay for the doughnuts.

If all that pastry pounding and distance running sounds kind of sickening, well, Cooper says it can be.

"After Krispy Kreme, when people are running back, there is normally a fair amount of throw-up that happens," he says. "We have a group of students whose job is to go around and clean up the streets."

Gross, sure. But the race has raised nearly $1 million for UNC Children's Hospital and clinics so far, and the student leaders have committed to raising another $1 million.

"Behind all of this is a group that's committed to making a difference for our patients and families," says Leslie Nelson.

UNC Health Care is now having conversations about whether to go through with the name change, Nelson says. An online petition to scrap it has gathered about 13,000 signatures so far.

Marion Nestle, a public health professor at New York University, and former adviser in nutrition policy for the federal government, says public fallout from awkward pairings of corporate brands with health causes has been increasing.

She points to Coca-Cola's corporate partnership with the American Academy of Family Physicians as another high-profile example.

"There was a big demonstration in front of a California hospital a few years ago," Nestle says, "in which physicians burned their membership cards to the academy in protest."

Last summer, the physician's group and the soft drink company announced they're ending their deal.

Nestle says that's certainly not apples to apples with what's happening at the UNC clinic. But she does think putting Krispy Kreme in the clinic's name — for whatever reason — sets a bad example for kids.

Race coordinator Chris Cooper says if UNC decides to back off the name change, he's OK with that.

"I don't think anyone in the organization was really excited about us having a name on the clinic," he says. "I think a lot more of it was, 'How are we going to use this name to help the children's hospital even more?"

But, if it isn't helpful in drawing more people to the race and in raising more money for the good cause, Cooper says, then he has no attachment to the name.