Accessibility links
Inside Each Flu Shot, Months Of Virus Tracking And Predictions : Shots - Health News Scientists worldwide face a yearly challenge in deciding what goes into the annual flu vaccine to make it effective. The job requires keeping tabs on a massive group of speedy, shape-shifting viruses. 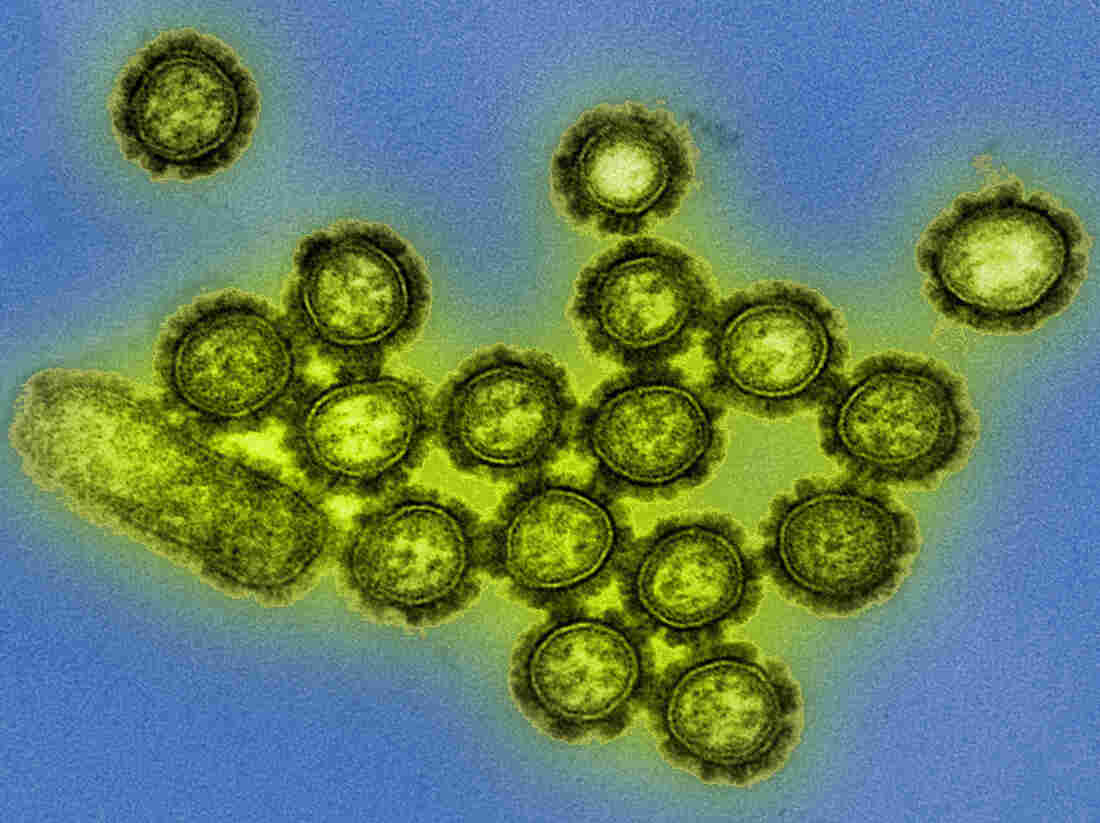 This year's flu vaccine protects against a few different virus strains, including the H1N1 seen here. The fuzzy outer layer is made of proteins that allow the virus to attach to human cells. NIAID/Flickr hide caption 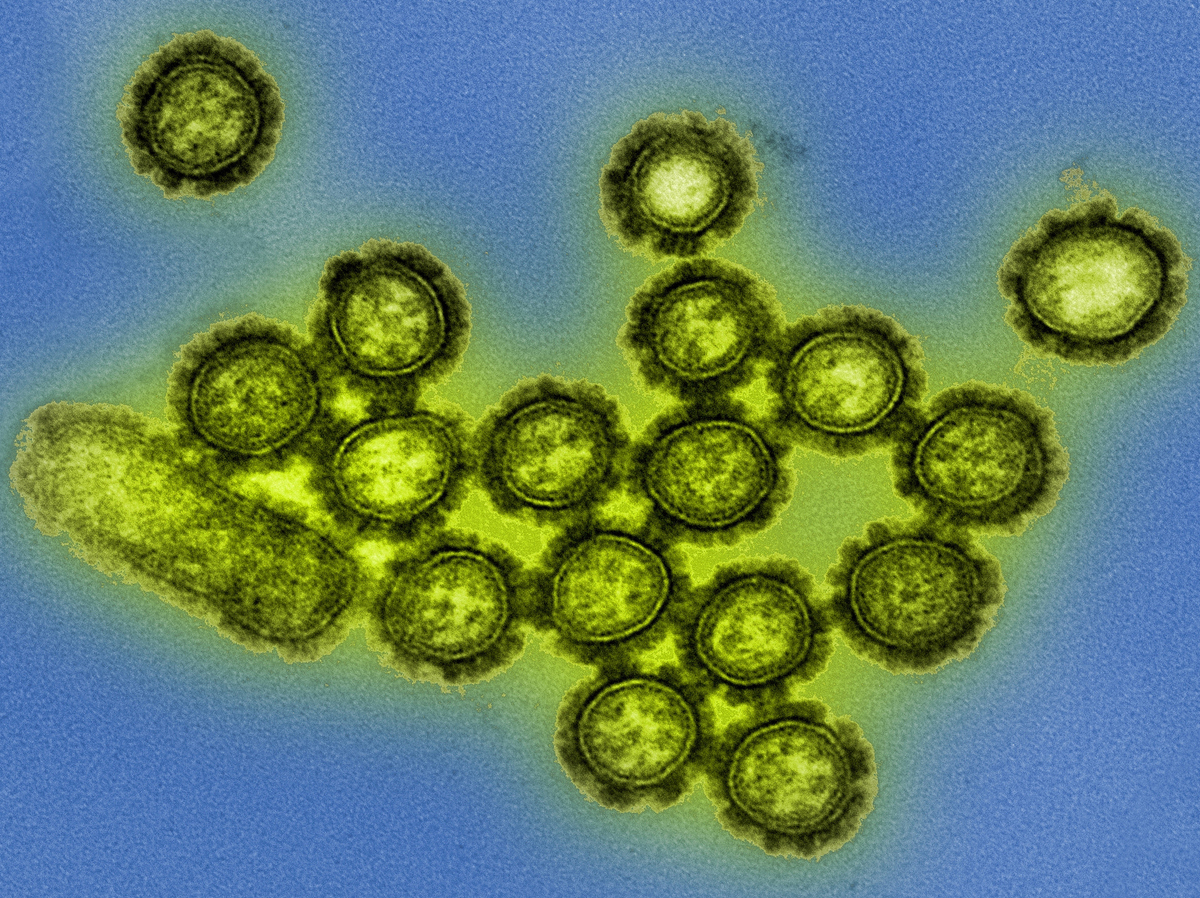 This year's flu vaccine protects against a few different virus strains, including the H1N1 seen here. The fuzzy outer layer is made of proteins that allow the virus to attach to human cells.

Every year, the flu almost goes extinct in temperate places like the United States. The key word is "almost." It stays afloat by constantly moving.

"It looks like it's hopping between different cities and different populations," says Sarah Cobey, a computational biologist at the University of Chicago.

The virus does an annual migration across the world, hitting the Southern Hemisphere during its winter, the Northern Hemisphere right about now, and hanging out in the tropics in between — especially in parts of Asia.

It's still unclear exactly why the flu ramps up when it does. What is clear is that the flu has been an annual bane of human existence for a long time.

Many Americans Believe They Don't Need The Flu Vaccine

It's also clear that the strains evolve quickly.

"The turnover rate in the flu population is really high, so all of the flu viruses that are circulating on the globe right now are actually going to be extinct in a couple years," Cobey says. But new strains will take their place.

Cobey's ultimate goal is a big one. "I'm really interested in the question of whether we can drive flu extinct in humans," she says.

Step one in Cobey's game plan is understanding how human bodies change in response to the virus. She says high-speed Darwinian evolution goes on inside everyone in response to changes in the flu population that people are exposed to. It's a complicated back-and-forth, happening at breakneck speed. About every eight hours the immune system makes new generations of cells tweaked to better attack invaders like the flu.

"Influenza is covered with these spikes, basically, on its surface," Cobey says. Those are proteins usually referred to as "H" and "N." The spikes allow the virus to attach to the host's cells and infect them, commandeering the cells to replicate. In response, the immune system produces antibodies that attach to the spikes on the surface of the virus, blocking it from entering cells. But influenza mutates so often that the spikes frequently change shape, sometimes in ways that prevent antibodies from attaching to them.

"This is how flu is constantly outrunning the immune system," Cobey says.

That's one of the reasons why Cobey doesn't expect we'll get rid of the flu anytime soon.

A universal vaccine that would protect people from all influenza strains is in the works, though nowhere near production.

"I'd say that we're not going to be getting rid of [the flu] anytime soon," Cobey says. But in the meantime, our immune systems are doing a pretty good job of keeping up. And, of course, vaccination gives the body a better chance at fighting off the seasonal scourge.

Whether it's a shot in the arm or a spray up the nostril, the vaccine gives the immune system a preview of what strains to expect.

Derek Smith at the University of Cambridge is one of the people who figures out what goes in the vaccine each year. He's an evolutionary biologist, a virologist and a mapmaker. Smith's lab studies how the strains of flu virus evolve — specifically, how the outer coat of proteins changes.

Researchers like Smith look at about 20,000 strains of flu from throat swabs of sick people in about 100 countries across the globe. Then they map how far the viruses floating around in this year's coughs and sneezes have strayed from last year's versions. They put all that information into tables.

"These tables are a little bit like the mileage chart that says how many miles it is between different cities," Smith says. They show how the pattern of proteins coating each virus cell has changed from year to year.

The committee then comes out with a list of the four strains most likely to make people sick, and vaccine manufacturers get moving. In the U.S., they make about 200 million doses in a matter of months.

"And it's rarely the case that more than one of those strains will change," Smith says.

Here's the snag: Sometimes they do, if there's a mismatch for one of the strains like there was last year. But a person will typically still be protected from the other strains in the shot, which means the best first line of defense against flu is still the seasonal vaccine.

This year's vaccine is intended to protect against strains similar to the H1N1 strain behind the 2009 swine flu pandemic, viruses like an H3N2 strain first identified in Switzerland in 2013, and two other strains that have been circulating in humans for much longer.