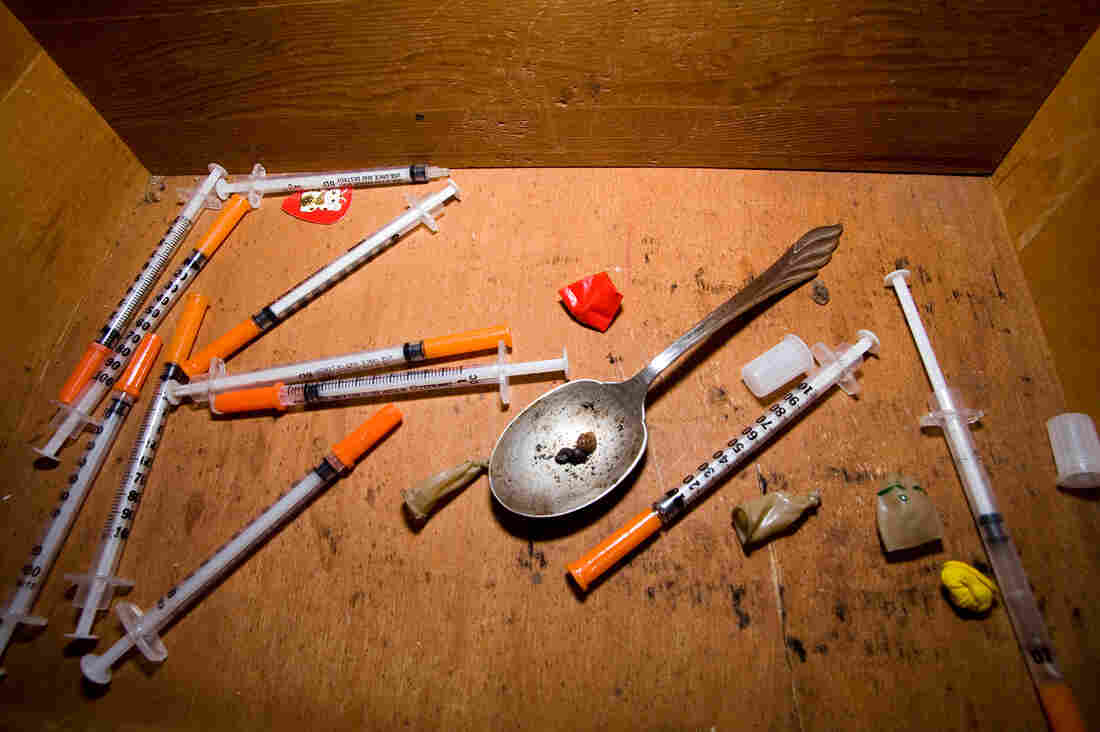 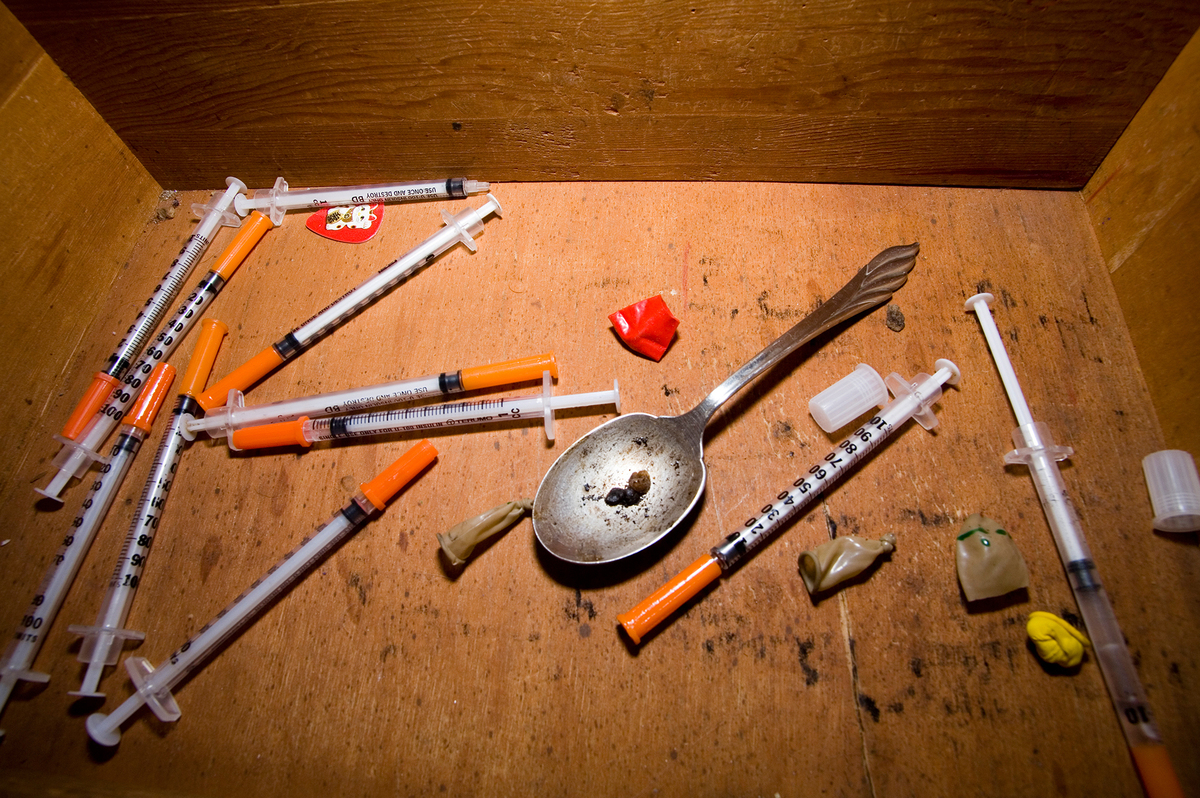 A "speedball" mix of heroin and cocaine has caused overdose deaths for decades. Today, high-risk blends may alternatively include heroin or opioid pain pills plus Klonopin, Clonidine, or Fentanyl.

In a brick plaza next to the Chelsea, Massachusetts city hall, Anthony, a bald but still-youthful man in grey sweats, tells me he spent the previous night in the hospital for what he says was his twelfth overdose.

Anthony and other users of illegal drugs agreed to speak to NPR for this story on the condition that we use only their first names. He blames his overdose on what his dealer told him was a particularly strong bag of heroin laced with the anesthesia drug fentanyl — or something like it.

"He told me how strong it was," Anthony says, "but everyone says that to sell their dope. The potency now is so inconsistent, you don't know. So you'll eat a bunch of Klonopins and do a shot of heroin, and then you're dead."

Among 501 overdose deaths assessed by the Office of the Chief Medical Examiner in Massachusetts in the first six months of 2014, and analyzed by the Harvard T.H. Chan School of Public Health, the vast majority were caused by heroin or a prescription opioid taken in combination with some other drug or alcohol. Fentanyl, a synthetic opiate that's many times more powerful than heroin, was present in about 37 percent of the deaths, the researchers found. Klonopin, Xanax and other anti-anxiety benzodiazepines showed up in 13 percent of the Massachusetts overdose deaths.

Anthony says many users figure the risk from taking one of these multi-drug "cocktails" is worth the extra $2, or so, per additional pill.

"It intensifies the heroin high, and keeps you high longer," he says.

On the street, there's a hot market for a lot of different prescription medications.

Using heroin in combination with other drugs is certainly not new. The speedball mix of heroin and cocaine that is present in some of the overdose deaths has been a popular high-risk choice for decades. Patients on methadone describe another popular cocktail taken after their daily dose of methadone treatment: gabapentin (anti-seizure medication), Klonopin, clonidine (treats high blood pressure and attention deficit hyperactivity disorder) and an over-the-counter allergy medicine.

"Little do you know that they all take a toll on your heart and on your breathing," says Nicole, another drug user, who says she's on methadone treatment for her heroin addiction.

Some heroin users pill-shop, she says, knowing which symptoms to mention so their doctor will prescribe something for anxiety or depression. And patients who have a legitimate need for these medications, who take them as prescribed, sometimes also experience an overdose.

"You trust your doctor," Nicole says. "You think, 'Oh, my doctor's giving this to me, so it's fine. Nothing's going to happen to me — like I'm prescribed to take it.' "

But many other people take the mixture with the aim of getting high, she says. "I think that the cocktail's a more common thing than heroin is now. Or, most people that take heroin take the cocktail as well."

Doctors who treat patients in recovery face difficult choices. Patients often describe increased anxiety, depression or trouble sleeping. But methadone and benzodiazepines can both suppress breathing; for someone who is on methadone, using benzodiazepines to calm anxiety can trigger a serious adverse reaction.

Even physicians who specialize in addiction medicine have trouble figuring out what to prescribe for anxiety or depression when a heroin patient is the doctor's office begging for help, says Dr. Kavita Babu, a toxicologist at the University of Massachusetts Medical School.

"Not only is it difficult to put our knowledge of pharmacology into play," she says, "but sometimes, [when] managing patient expectations about how their pain or anxiety should be treated, our clinical knowledge falls apart at the bedside."

Now, with the revelation that most overdose deaths in Massachusetts stem from a toxic mix of heroin or prescription pain medicine with alcohol, cocaine or fentanyl, leading physicians and officials are urging all doctors to be more careful in their prescribing habits. They've pledged to update a state database where doctors are supposed to input the drugs they prescribe for each of their patients.

Mixing these drugs in toxic ways is "a big problem," says Dr. Jim O'Connell, president of the Boston Health Care for the Homeless Program. "We've just been scratching the surface on it." O'Connell says he asks patients which pills are big sellers on the streets and tries to avoid prescribing them.

"We, as doctors, don't really have a good sense of what we should be prescribing, what we shouldn't," O'Connell says. "It's really the combination of other drugs that is going to be the battle down the line."

Many addiction specialists say society also needs to pay more attention to the emotional pain at the root of addiction.

In Chelsea, Anthony shows me the park bench where he's overdosed a dozen times.

"There's times when I really do want to die," he says.

I ask him why, and Anthony's face crumples in silent sobs.

"The more I do, the more guilt I feel and the more I want to kill myself," he says. He struggles with "the guilt and the pain and shame" for the repeated relapses.

Anthony clutches his hospital discharge notes in one hand. The notes say he should call his doctor and psychiatrist, and schedule follow-up appointments. Anthony doesn't have a phone. When I offer him mine to make the call, he gets the answering service. He doesn't leave a number.