Accessibility links
You Can Buy Insulin Without A Prescription, But Should You? : Shots - Health News Versions sold over the counter are based on older formulas and make tight control of blood sugar harder. But they're cheaper and might save a patient with diabetes whose alternative is to go without. 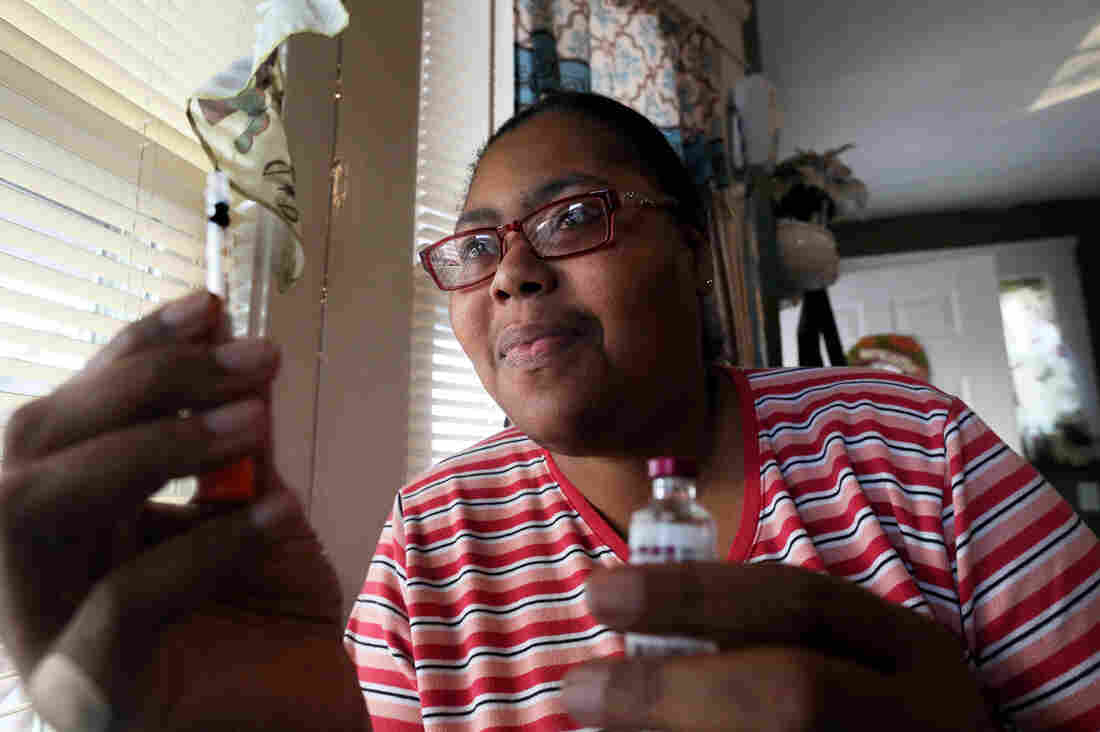 Carmen Smith now gets the insulin she needs via her doctor's prescription. When she lacked health insurance, buying a version of the medicine over the counter was cheaper, she says. But it was hard to get the dose right. Lynn Ischay for NPR hide caption 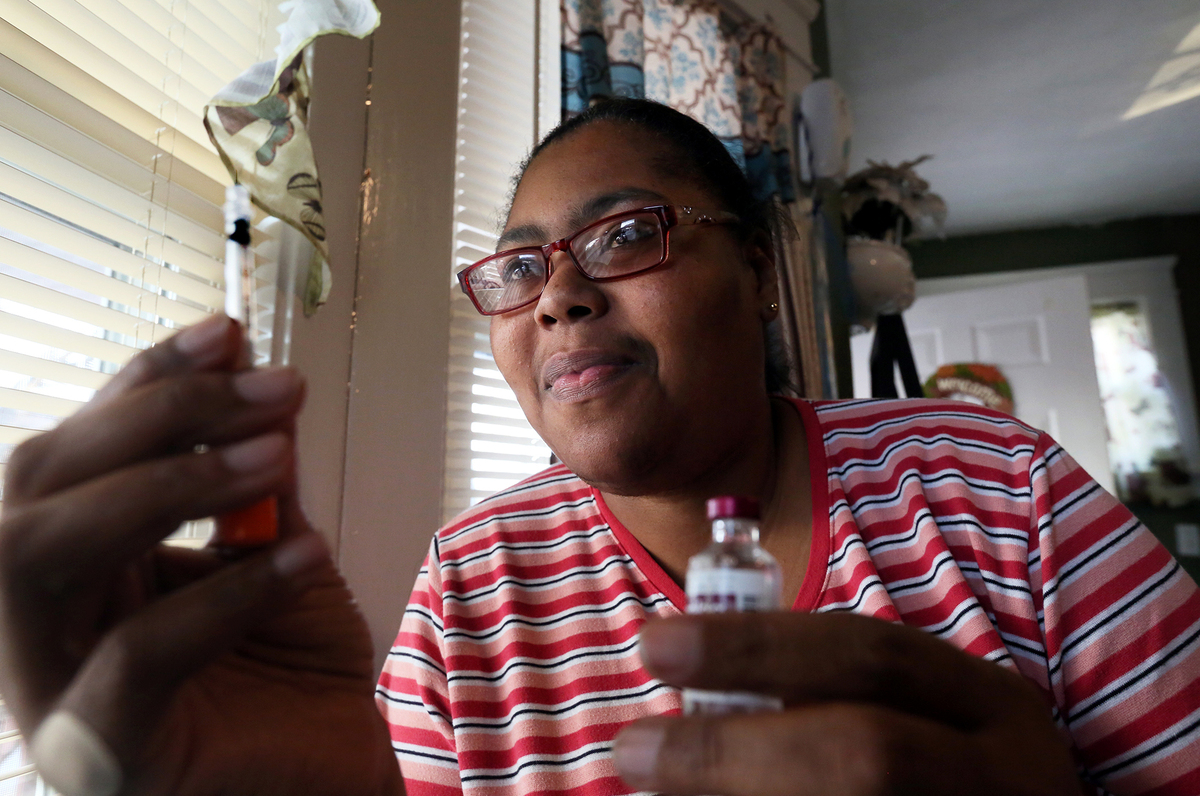 Carmen Smith now gets the insulin she needs via her doctor's prescription. When she lacked health insurance, buying a version of the medicine over the counter was cheaper, she says. But it was hard to get the dose right.

As anyone with diabetes can tell you, managing the disease with insulin usually means regular checkups at the doctor's office to fine-tune the dosage, monitor blood-sugar levels and check for complications.

But here's a little known fact: Some forms of insulin can be bought without a prescription.

Carmen Smith did that for six years when she didn't have health insurance and didn't have a primary care doctor. She bought her insulin without a prescription at Wal-Mart.

"It's not like we go in our trench coat and a top hat, saying, 'Uh I need the insulin,' " says Smith, who lives in Cleveland. "The clerks usually don't know it's a big secret. They'll just go, 'Do we sell over-the-counter insulin?' "

Once the pharmacist says yes, the clerk just goes to get it, Smith says. "And you purchase it and go about your business."

But it's still a pretty uncommon purchase. 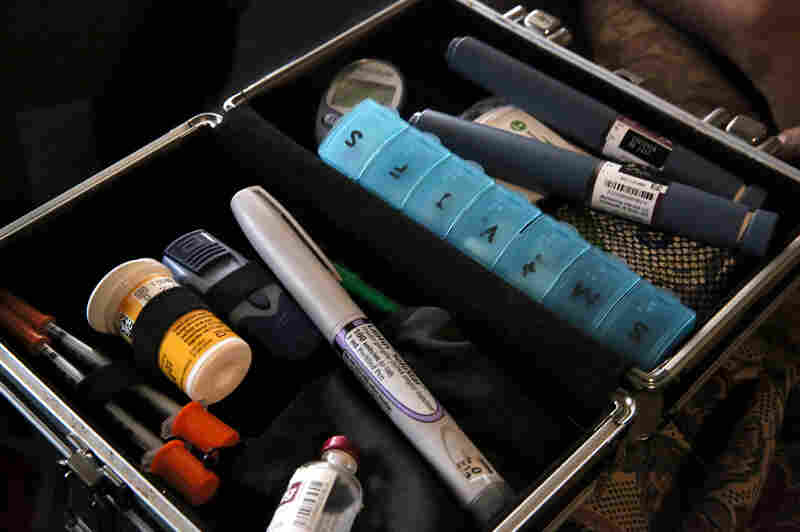 Smith keeps the tools for controlling her diabetes in this kit, which contains metformin, syringes, fast-acting insulin for daytime use and slow-release for overnight. Lynn Ischay for NPR hide caption 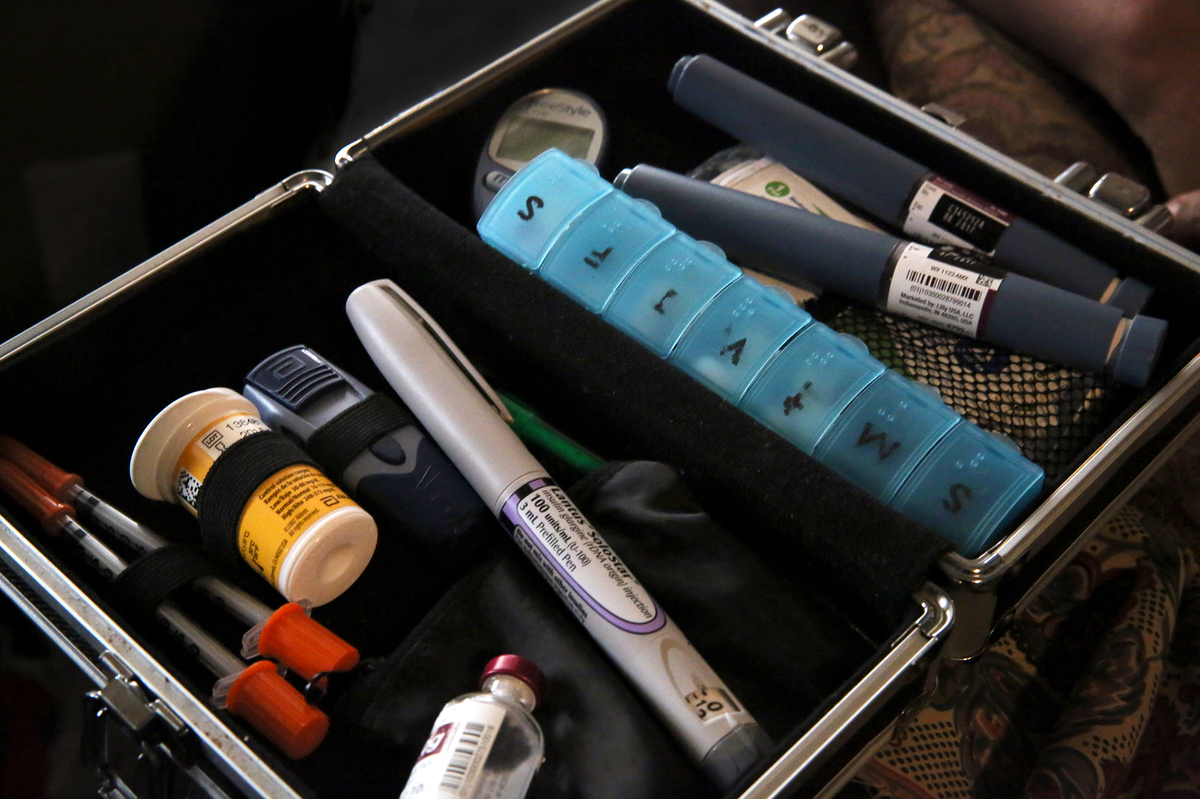 Smith keeps the tools for controlling her diabetes in this kit, which contains metformin, syringes, fast-acting insulin for daytime use and slow-release for overnight.

Smith didn't learn from a doctor that she could buy insulin that way. In fact, many doctors don't know it's possible. When she no longer had insurance to help pay for doctors' appointments or medicine, Smith happened to ask at Wal-Mart if she could get vials of the medicine without a prescription. To figure out the dose, she just used the same amount a doctor had given her years before.

It was a way to survive, she says, but no way to live. It was horrible when she didn't get the size of the dose or the timing quite right.

"It's a quick high and then, it's a down," Smith says. "The down part is, you feel icky. You feel lifeless. You feel pain. And the cramps are so intense — till you can't walk, you can't sit, you can't stand."

Smith says her guesswork put her in the emergency room a handful of times over the years.

The availability of insulin over the counter presents a real conundrum. As Smith's experience shows, without training or guidance from a health care provider, it can be dangerous for a patient to guess at the best dosage and timing from version to version of insulin. On the other hand, being able to afford and easily buy some when she needed it may have saved her life.

There are two types of human insulin available over the counter; one made by Eli Lilly and the other by Novo Nordisk. These versions of the medicine are older, and take longer to metabolize than some of the newer, prescription versions; they were created in the early 1980s, and the prices range from more than $200 a vial to as little as $25, depending on where you buy them.

Dr. Jorge Calles, an endocrinologist at MetroHealth, Cleveland's public hospital, is alarmed to think that some people are self-medicating with any sort of insulin.

"It's a very serious situation if they are selling it over the counter — without any control with a prescription, specifically," Calles says.

According to the medical consulting firm IMS Health, about 15 percent of people who buy insulin in the growing U.S. diabetes market purchase it over the counter without a prescription.

The U.S. Food and Drug Administration declined multiple requests by NPR for an interview on this topic. But, in an email, an FDA representative said that the versions of insulin now available over the counter were approved for sale that way because they are based on a less concentrated, older formulation, "that did not require a licensed medical practitioner's supervision for safe use."

The broader availability of this form of insulin allows patients with diabetes to obtain it "quickly in urgent situations, without delays," the FDA says, and is intended to increase patient safety.

Still, some people with diabetes, as well as some doctors, doubt that the benefits of that greater availability outweigh the risks, especially for patients who switch from one type of insulin to another without telling their doctor.

"This is not something that should be done without the help of a professional," says David Kliff, who has Type 1 diabetes and writes the Diabetic Investors blog. Kliff has followed and written about the expanding business of diabetes for years.

FDA officials are "basically sticking their heads in the sand" on this issue, Kliff says, and making a lot of assumptions.

"They look at insulin as a drug," he says, "and say, 'There's this enormous body of evidence that shows that the drug is safe.' But, you know, there's a little asterisk at the end there. What the little asterisk basically says is: 'You know, that's assuming that the patient is trained on it.' "

When asked about safety concerns, the FDA told NPR that the agency welcomes more research into the safety of over-the-counter insulin.

"I didn't realize that insulin was over the counter in Indiana until two of my patients, who were in good control, suddenly had increased glucoses," Burke says. He asked them if they had changed their diet, lost weight, altered their workout routines. They had not.

"They both admitted that they had decided to switch to over-the-counter insulin," Burke says, "which was different from what I had prescribed."

Over time, taking the wrong dosages destroys your body, Burke says. Poorly managed diabetes is the cause of a host of complications, such as high blood pressure, kidney disease, nerve damage, loss of eyesight and stroke.

Burke says he took his concerns to the American Medical Association. But the national doctor's association told him there are no data showing that the drug's over-the counter availability is a public health hazard. In fact, the AMA's board noted, getting insulin without a doctor's prescription may be an important way for some insulin-dependent patients to get access to the medicine they need.

Dr. Todd Hobbs is chief medical officer of Novo Nordisk in North America, which makes Novolin, one of the two versions of insulin sold over the counter. His company partners with Wal-Mart to sell its version under the brand name ReliOn. (Wal-Mart declined to be interviewed for this story.)

Hobbs says Novo Nordisk's version of insulin is for people who don't have insurance, or who have to pay a lot for their other prescriptions — "people who just, for whatever reason, have fallen through the cracks and either don't have insurance coverage at the time or are without coverage."

With ever-rising copays and premiums, he says, many patients are turning to nonprescription insulin because it's cheaper and all they can afford.

"But we hope to try to help them to not have to do that," Hobbs says.

"We clearly think the newer versions are more close to what the body would do on its own," he says. The prescription versions are better and safer, he agrees, because they make it easier for patients to avoid wild fluctuations in blood sugar.

Carmen Smith doesn't blame the insulin she was taking for her emergency room visits.

"Insulin is not the problem," she says. "It is getting the insulin that is the problem. Once I got connected with my physician, life as a diabetic got a lot less complicated for me."

Smith is now on Medicaid. She has a doctor — and a prescription for one of the newer generations of insulin.

This story is part of NPR's reporting partnership with WCPN ideastream and Kaiser Health News.