Accessibility links
From Joint Aches To Insomnia, Ebola's Effects Linger In Survivors : Shots - Health News Ebola's physical legacy doesn't end when a patient leaves the hospital. A follow-up of the small group of patients treated in the U.S. finds many experienced various symptoms for months.

From Joint Aches To Insomnia, Ebola's Effects Linger In Survivors

From Joint Aches To Insomnia, Ebola's Effects Linger In Survivors 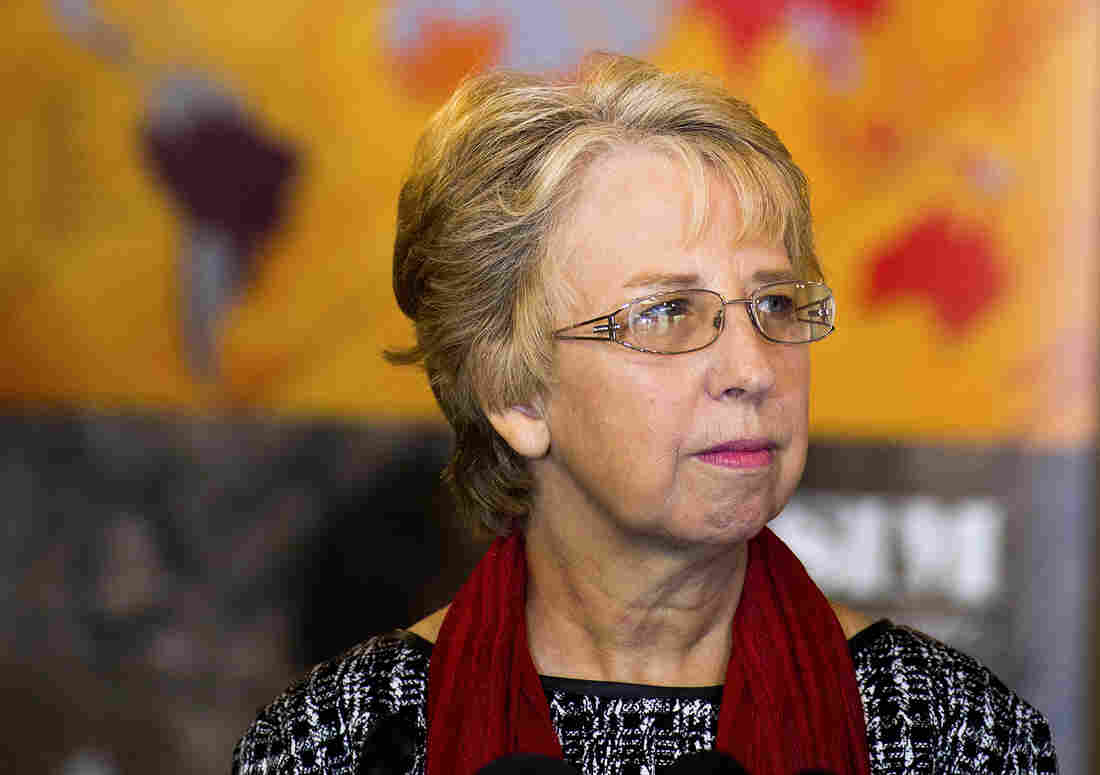 Nancy Writebol, a missionary who recovered from Ebola she contracted in Liberia in 2014, told a reporter last July that she was still experiencing knee pain and hadn't fully regained her energy. Chris Keane/Getty Images hide caption 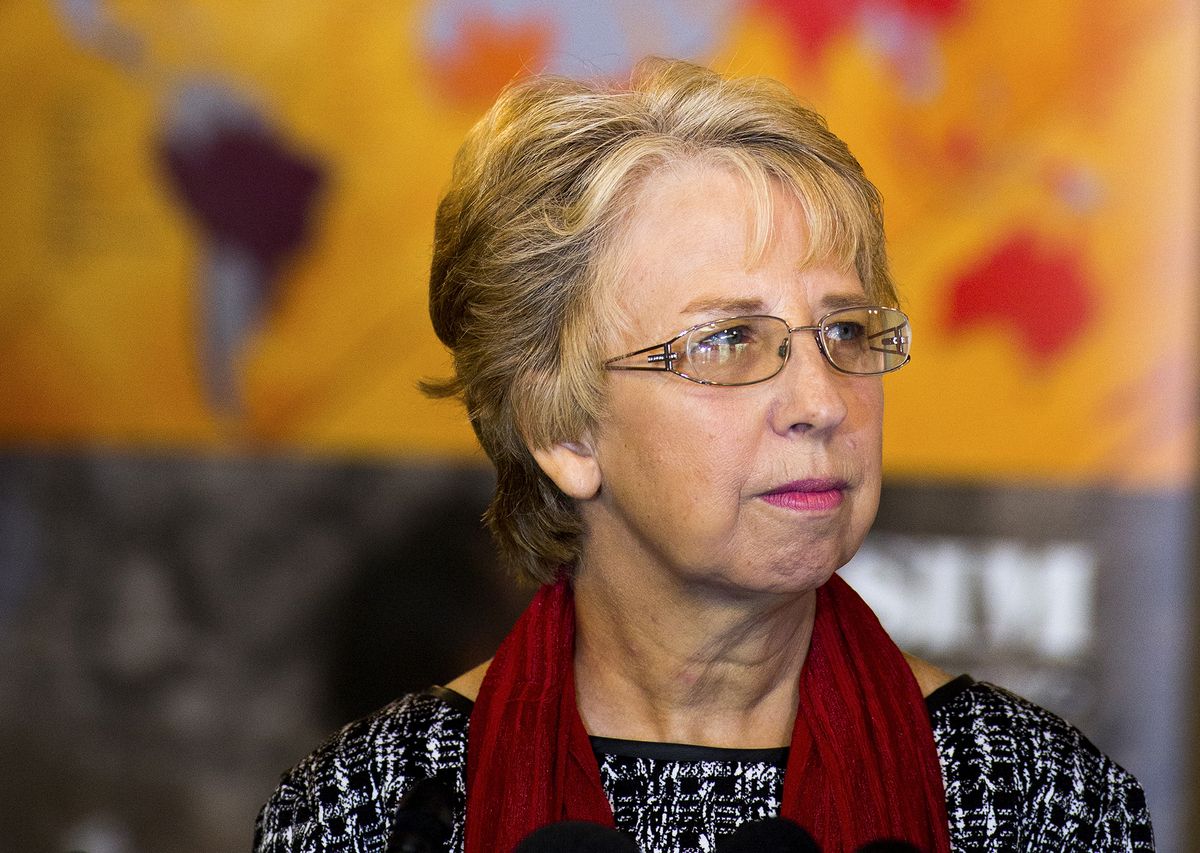 Nancy Writebol, a missionary who recovered from Ebola she contracted in Liberia in 2014, told a reporter last July that she was still experiencing knee pain and hadn't fully regained her energy.

For some survivors of the Ebola virus disease, complete recovery is slow.

Doctors reporting Wednesday on a follow-up survey of the nine survivors who were treated for the Ebola virus in the U.S. say the survivors experienced a "wide constellation" of symptoms, involving many organ systems, for months after their successful treatment for the virus.

Dr. Tim Uyeki, an epidemiologist with the Centers for Disease Control and Prevention and one of the authors of the report, says it's still unclear, in some cases, whether the lingering symptoms were caused by remaining traces of Ebola virus, were leftover damage from the infection or its treatment — or were caused by something else. But none of the nine survivors pose any risk of transmitting Ebola virus, he says.

The report was published as a letter in this week's New England Journal of Medicine.

Over the decades, survivors of the Ebola virus have reported long-lasting symptoms that range from blurry vision and joint pain to depression and hearing loss.

Nancy Writebol told the Charlotte Observer last July, a year after she was diagnosed with Ebola, that she was still experiencing knee pain and hadn't fully recovered her energy.

According to a Dallas Morning News story in March, Ebola survivor Nina Pham was experiencing "fatigue, insomnia, body aches and liver problems, and [was] frightened by the unknown possible long-term effects of Ebola and experimental treatments used to save her life."

And in some survivors the virus clearly managed to hide in select parts of the body, even after they had otherwise recovered.

Dr. Ian Crozier, who contracted Ebola in Sierra Leone, almost went blind from Ebola virus that persisted for a time deep inside his left eye, even after he was no longer contagious and the rest of his body had been cleared of the virus. 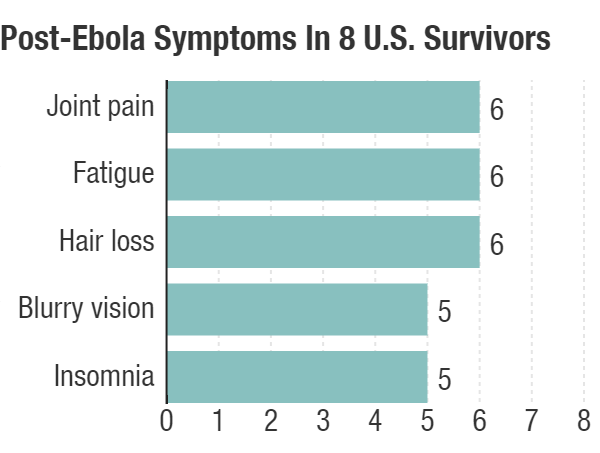 Earlier this year, Pauline Cafferkey, a Scottish nurse who had survived Ebola, had to be readmitted to a London hospital several months after her initial discharge. Her new problem? Meningitis that doctors there linked to her Ebola infection. (Cafferkey ultimately made a full recovery from the meningitis and returned to Scotland, the Royal Free Hospital in London subsequently reported.)

Of the 11 patients treated in U.S. hospitals, nine survived. In March, doctors with the CDC checked in with eight of these survivors, to see how they were doing, an average of five months after their discharge. (The ninth survivor was still in the hospital at the time of the survey.)

Fatigue, joint pain and hair loss were the most common complaints. Six survivors said they were experiencing psychological problems that included short-term memory loss, insomnia and depression. Five patients had eye pain or blurry vision — symptoms that have been reported by survivors of other Ebola outbreaks since the 1990s.

Only one survivor reported that all the symptoms of the illness had gone away. But six said they had been able to return to their normal daily activities within two months of leaving the hospital.

"These people were generally healthy before Ebola," says epidemiologist Uyeki. Many of them are health care workers who contracted the disease while caring for others.

Uyeki says that after Cafferkey's experience, other survivors have been told to keep an eye out for signs of meningitis. The researchers have no further plans for follow-up with the U.S. group, he adds.

The small number of people treated in the U.S. is tiny in comparison with the total number of Ebola survivors in West Africa. The World Health Organization estimates that about 17,000 in West Africa survived, of the roughly 29,000 who contracted the disease.

Survivors in areas where the illness was epidemic very likely have additional symptoms related to the psychological trauma of stigma, the deaths of friends and relatives, and isolation from the community, Uyeki says.

The outbreak of recent years in West Africa was the largest in recorded history. It also has the largest number of known survivors, making this the first opportunity for doctors to document the long-term consequences of the virus.

This summer, the Ministry of Health of Liberia and the National Institute of Allergy and Infectious Diseases launched a joint five-year study of thousands of survivors in Liberia and their close contacts, aimed at tracking the experience of many more survivors in the months and years after their recovery.