Accessibility links
Helping Others Is Good For Them, And Good For You : Shots - Health News If the holidays have you stressed out, an act of kindness could help. Researchers tracked people and found that stress levels dropped when they went out of their way to help others. 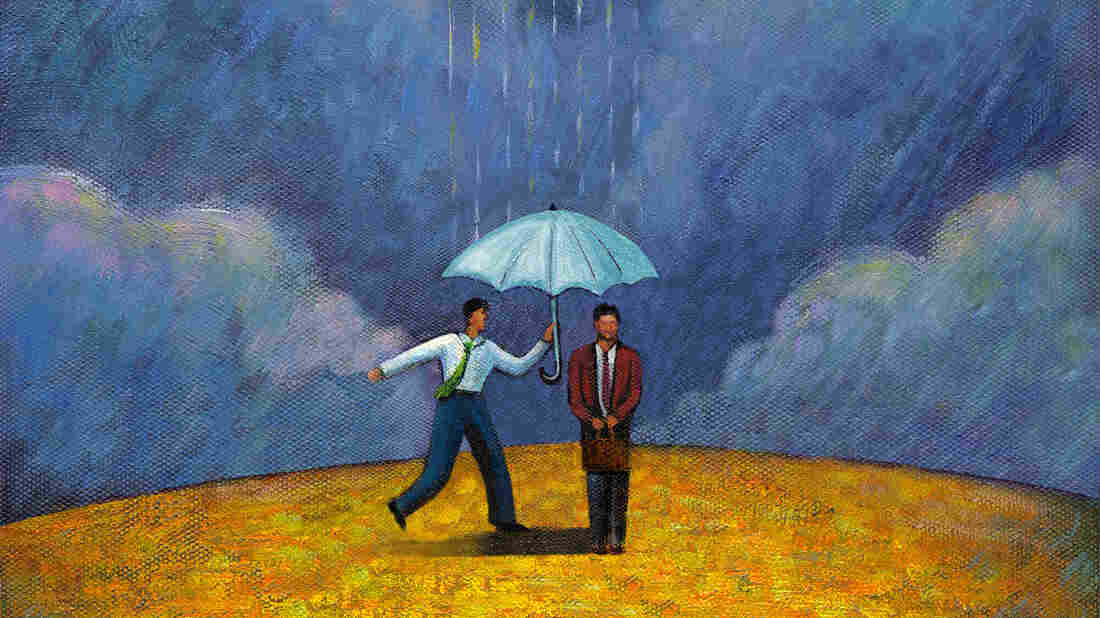 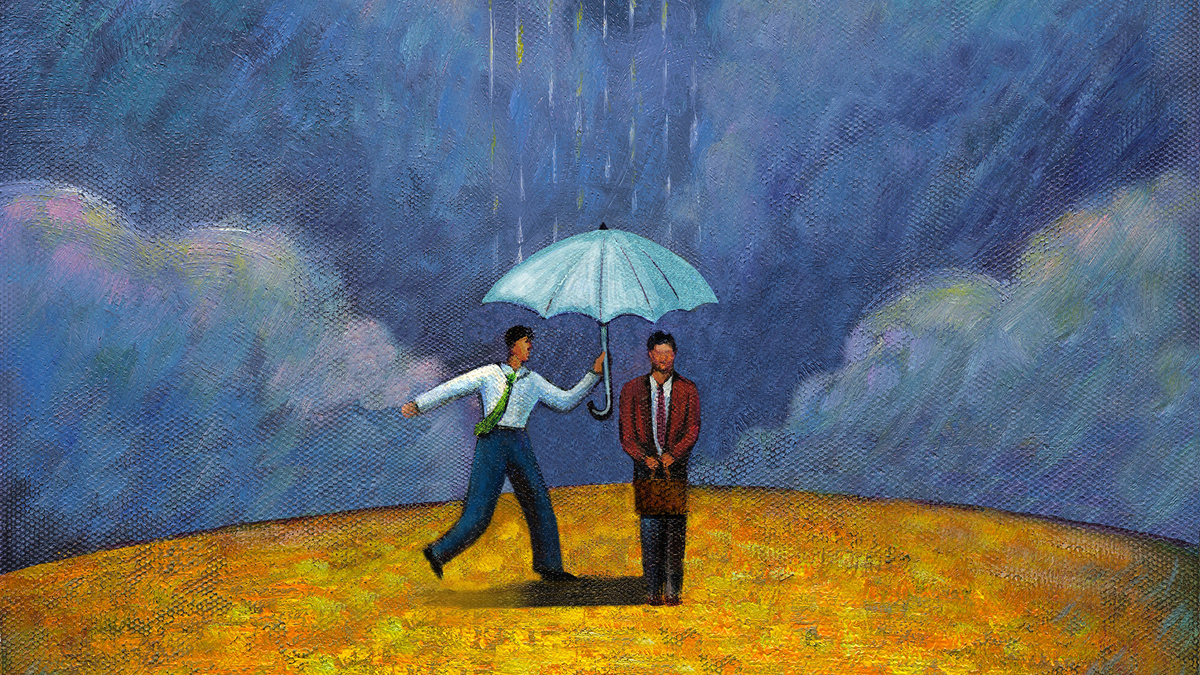 Say it's Monday and it's a bad one. You overslept and definitely didn't shower, so your hair might smell and maybe you spill some coffee on your shirt while you're barreling toward the Metro, which is especially unfortunate because you're meeting with your boss at 9:30.

Just when you think your bloodstream has reached maximum cortisol saturation, a slow-moving elderly man steps between you and the train doors. Then he drops his wallet. Do you rush past him because you're too stressed to deal and there are plenty of other people around to step up — or do you help the guy out?

Emily Ansell thinks you should do the good deed, and not just because it's the nice thing to do. The psychiatry professor says lending a hand could actually help you feel less stressed out. Ansell co-authored a report with two of her Yale School of Medicine colleagues, Elizabeth Raposa and Holly Laws, that found as much.

Ansell and Co. gave participants a smartphone app that prompted them to record stressful experiences and small acts of kindness, like giving directions, holding an elevator or returning a stray wallet to its owner. The effect of this "prosocial" or helping behavior was compelling. "It pretty much kept people feeling similar to days where they were not stressed at all," Ansell says.

Researchers already knew that people who are generally inclined toward altruism tend to be happier and live longer than those who aren't. What Ansell and her colleagues discovered is that whatever your baseline level of antipathy may be, hating people a little bit less for the day can make you feel better. "It's not just whether you're more altruistic than the next person," Ansell says, "it's that being more altruistic than usual can change your experience from day to day. It's all about doing more than your average."

The two-week study published this month in Clinical Psychological Science followed 77 adults ages 18 to 44. The results showed that those who helped others more in a day reported higher levels of positive emotion that day. Behavior also had an impact on how they responded to stress. On days when participants reported fewer instances of helping others than their average they had a more negative emotional reaction to stress; when they held elevators and opened doors more than usual, it sheltered them from the negative effects of stress –they reported no decrease in positive emotion that day and lower than their average negative response to stress.

Earlier research has found similar improvements in stress in spouse caregivers, says Michael Poulin, a professor of psychology at the University at Buffalo who co-authored that 2010 study. The investigation led by Ansell used a general sample population, which suggests the findings might apply more universally. But neither study explains exactly how helping others works to buffer stress and improve emotional well-being. "We don't know what the active ingredient is," Poulin says. "Nobody has captured that yet."

That's exactly what he's after. Poulin and his colleagues have evidence from two forthcoming studies that suggests thinking about someone else in need reduces the ability to conjure up words relating to the self. If you're caretaking, they suggest, you literally cannot think about yourself as quickly as you could otherwise. He says that's part of what might be unique to helping behavior, as opposed to hanging out with friends or other positive social contact.

"When you are thinking about helping other people you're simply not thinking as much about yourself and your problems," says Poulin. And that may reduce the effects of stress. "In essence it's a kind of distraction," he adds, "but a more satisfying distraction that surfing the Web or binge-watching House of Cards."

Other research indicates that certain emotions associated with caregiving, like compassion, stimulate the release of oxytocin, a powerful hormone thought to drive maternal behavior and social attachment, and prompt other physiological changes that result in a calming effect.

"It is wired within us that when we care and nurture it affects our physiology in a very positive way," says neuroscientist James Doty, who founded Stanford's Center for Compassion and Altruism Research and Education. "That is the reward for caring." Evolutionarily speaking, Doty says, humans need this reward for survival because our big-brained babies require so many years of selfless care.

It may be a stretch to connect that evolutionary trajectory to picking up a wallet for a stranger, Poulin says, but the theory seems logical enough. He's reluctant to ignore a far more simple explanation, though: as a society, we tend to reward people who do good things, so we learn to feel good about helping others. "That could have nothing to do with evolution," Poulin says, "other than the fact that we evolved to be social."

Whatever the reason helping behavior brings us benefits, the new study's authors want to figure out how to harness it to help more people. For Emily Ansell, the next step is to figure out if prescribing prosocial behavior could help those who struggle with anxiety, depression or other mood disorders. Ansell says using a smartphone app to deliver suggestions about how to alter behavior could help people manage stressful periods or arrest the progression of mental health problems.

But before you embark on a mission to do good, a caveat: You can't fake it. "You have to come from a place of authenticity," says Emma Seppala, who directs the Stanford program with Doty. "If you're doing it for explicitly selfish reasons, it's unclear whether you'll get benefits."