Accessibility links
The Neuroscience Of Musical Perception, Bass Guitars And Drake : Shots - Health News Recent research hints at how the human brain is uniquely able to recognize and enjoy music. Timing in your brain is nearly everything.

Listen to this clip of Beethoven's Sonata No. 23

0:13
The Neuroscience Of Musical Perception, Bass Guitars And Drake 0:13

The Neuroscience Of Musical Perception, Bass Guitars And Drake 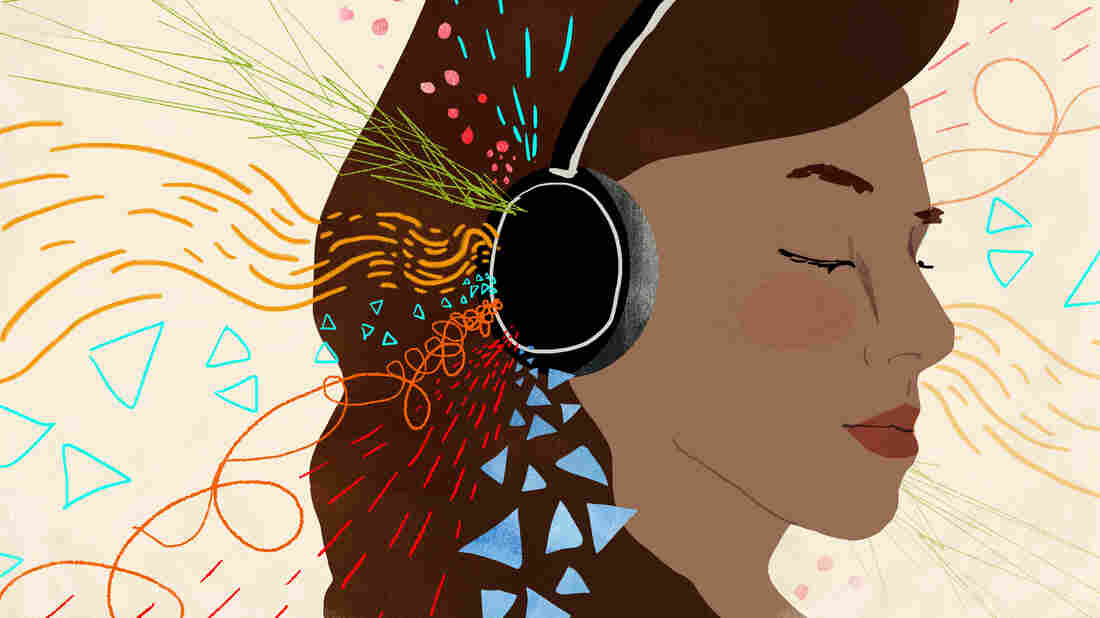 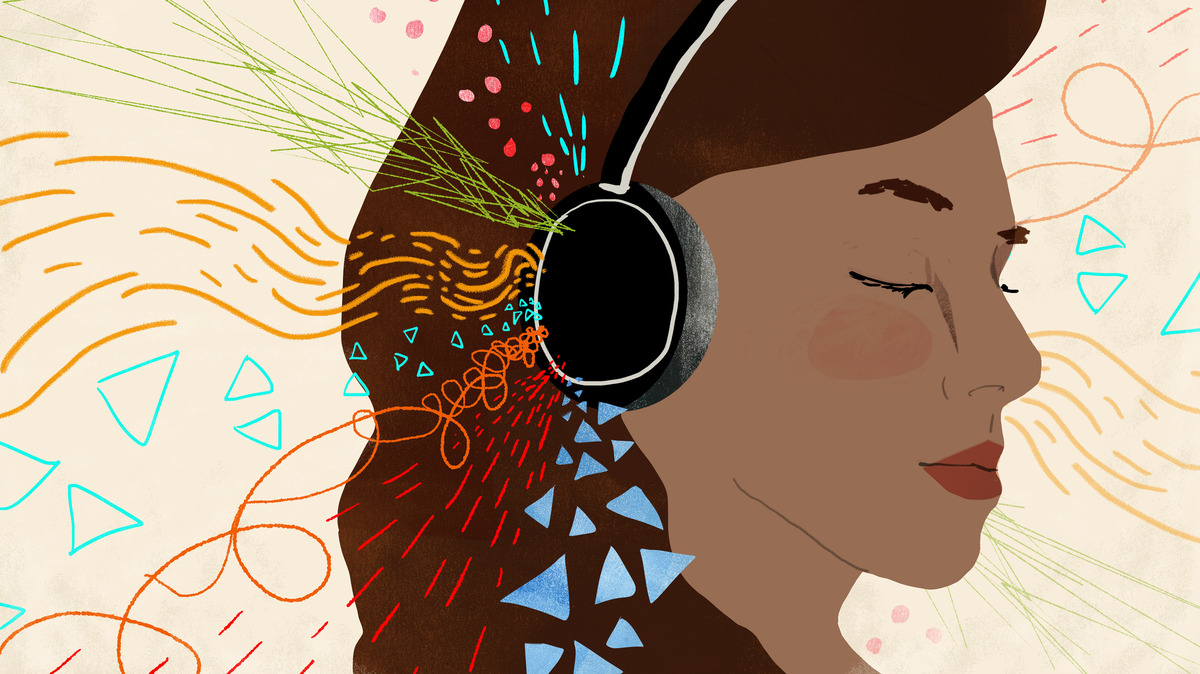 In June of 2001 musician Peter Gabriel flew to Atlanta to make music with two apes. The jam went surprisingly well.

At each session Gabriel, a known dabbler in experimental music and a founding member of the band Genesis, would riff with a small group of musicians. The bonobos — one named Panbanisha, the other Kanzi — were trained to play in response on keyboards and showed a surprising, if rudimentary, awareness of melody and rhythm.

Since then Gabriel has been working with scientists to help better understand animal cognition, including musical perception. Plenty of related research has explored whether animals other than humans can recognize what we consider to be music — whether they can they find coherence in a series of sounds that could otherwise transmit as noise. Many do, to a degree. And it's not just apes that respond to song.

Parrots reportedly demonstrate some degree of "entrainment," or the syncing up of brain wave patterns with an external rhythm; dolphins may — and I stress may — respond to Radiohead; and certain styles of music reportedly influence dog behavior (Wagner supposedly honed his operas based on the response of his Cavalier King Charles Spaniel). But most researchers agree that fully appreciating what we create and recognize as music is a primarily human phenomenon.

How Brain Waves Entrain To Music

This image, taken from an MEG reading, shows a musician's brain more strongly entraining to Beethoven's unhurried Sonata No. 23. 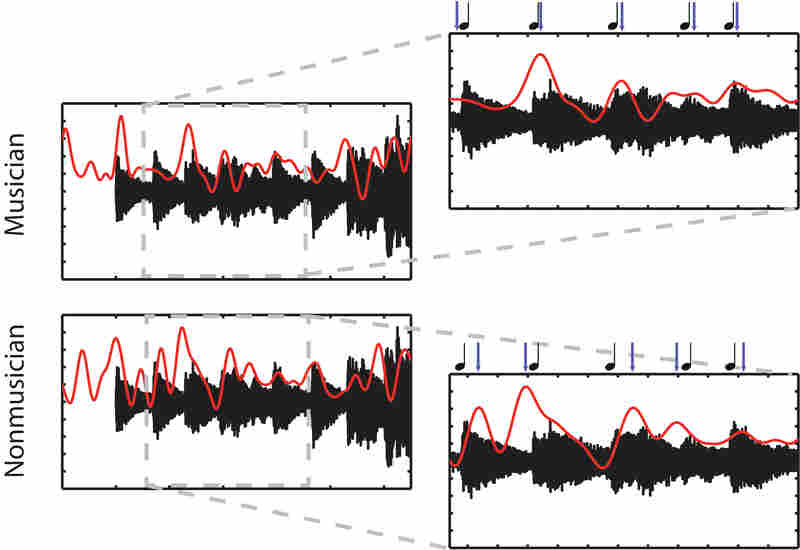 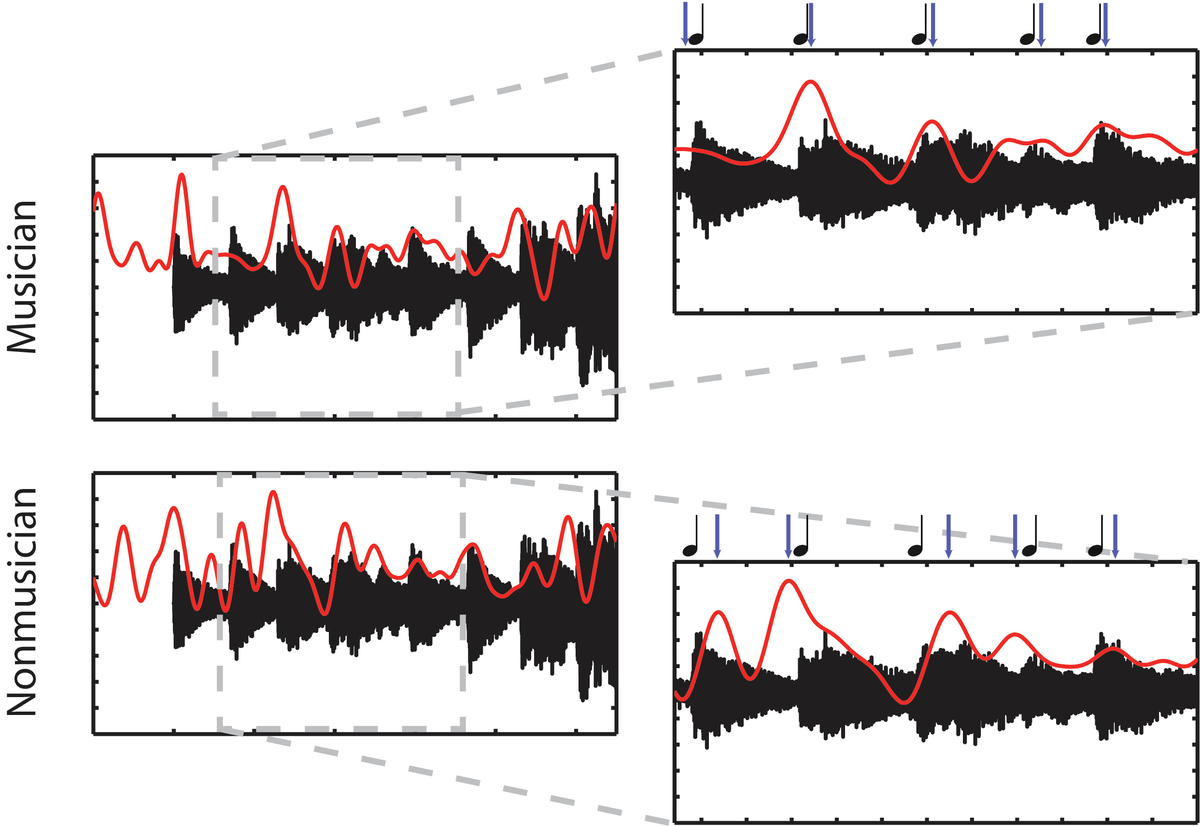 Listen to this clip of Beethoven's Sonata No. 23

Recent research hints at how the human brain is uniquely able to recognize and enjoy music — how we render simple ripples of vibrating air into visceral, emotional experiences. It turns out, the answer has a lot to do with timing. The work also reveals why your musician friends are sometimes more tolerant of really boring music.

Past work has shown that human brain rhythms entrain to speech patterns. In other words, our brain waves oscillate in unison with the rhythm of spoken word. Building on this and other prior research, a recent study published in the Proceedings of the National Academy of Sciences confirms that — perhaps intuitively, and likely an evolutionary byproduct of speech processing — the same is true for music.

Using a technology called magnetoencephalography, or MEG, which measures magnetic fields produced by electric currents in the brain, NYU psychology professor David Poeppel and his graduate student Keith Doelling analyzed the brain wave patterns of 39 people as they listened to music. Specifically, volunteers were played snippets of the "Three Bs," classical shorthand for Brahms, Bach and Beethoven. The study subjects' brain waves were traced while the music played, and the researchers found that the brain activity synced up with the music, particularly, as would be expected, in the auditory cortex — the region of the brain that processes sound. Their brains were on beat.

Next, Poeppel and Doelling assessed how brain wave patterns responded to music in musicians compared with nonmusicians, defined as, for the purposes of the study, those with at least six years of musical training who actively play music and those who don't currently play and who have less than three years of training, respectively.

They found that the brain wave rhythms of nonmusicians didn't entrain to music with a tempo less than one note per second, or what would be considered slow music. However the musicians' brain waves buzzed in synchrony to music as slow as 0.7 notes per second. "It looks like musicians can take longer, more drawn out musical phrases and group them into a pattern of some kind," says Poeppel. "The response to what some people perceive as just a series of beeps and blips turns on much more sharply in musicians."

Devin McAuley, a professor of cognitive science at Michigan State University who wasn't involved with the study, says, "These are exciting findings that fit into a broader body of work. It's been previously shown that musicians tend to be able to produce slower rhythms compared with nonmusicians. It's also been shown that children with musical training have a slower preferred tempo than kids who haven't had training."

The findings might help explain why — in my completely unscientific sampling of friends and acquaintances — musicians tend to be more tolerant of slow, ambient, droning music (my pal Kevin thrives at a dreamy 0.6 notes per second).

They might also explain why musicians appear to be more attuned to environmental sounds, like picking out a single voice in the din of a crowded room. Research shows that this may be because of musicians' heightened ability to discriminate between different frequencies.

Poeppel is quick to acknowledge that his work by no means proves that entrainment equates with being a good musician. "Maybe you're still a really bad piano player despite your brain rhythms locking on, but most of our musicians were conservatory-trained so presumably they're pretty good," he jokes. "And I don't plan on sitting them down and saying, 'OK, now play something!' "

A self-described "hardcore nativist," Poeppel says that much of musical ability and appreciation probably comes genetically hard-wired, but, as his study also showed, the number of years of musical training someone has correlates with entrainment. Whatever it means artistically speaking, we can train our brains to respond more precisely to music in a measurable, biologic way.

A study from 2014 supports Poeppel's findings and may reveal a nuance that helps explain how entrainment influences what we perceive as music. Using an electroencephalogram, or EEG, to measure electrical activity in the brain, psychologist Laurel Trainor and her colleagues from McMaster University in Hamilton, Ontario, found that the human brain is far more sensitive to low notes being off tempo than higher notes. Or, put another way, our brains entrain more to low frequencies.

The authors speculate that this could be why the rhythm sections of so many music styles around the world rely on bass, drums and lower tones, and why discordant guitar solos and blaring saxophone leads can sound just fine when off-beat bass guitar doesn't.

Drake Dancing To Justin Bieber's "What Do You Mean?"

Poeppel cautions that this research is in its early stages, but he speculates that if in fact we are more likely to entrain to lower frequencies it could help explain another critical component of musical perception: movement.

Music brings with it a subconscious physicality. Dancing, foot-tapping and head-bobbing or headbanging are often inseparable from the rhythm and beat of song itself. "Listening to music doesn't just activate the auditory regions of the brain," Poeppel explains. "Rhythmic input also automatically activates your motor cortex too. Call it 'predancing.' "

According to McAuley, the human brain looks to find, or really assign, music in movement, which could explain why the Internet exploded with musical mashups of Drake's "Hotline Bling" video in October. Though The Cosby Show theme song, Vince Guaraldi's "Linus and Lucy" and Justin Bieber's "What Do You Mean?" all vary in tempo, they each appear to sync up with the rapper's moves just fine. "Our brains can lay down beats anywhere on a continuously moving visual stimulus," says McAuley. It seems that though we entrain accurately to an auditory beat, we appear to allow some rhythmic leeway with visual input.

How humans perceive music is, of course, far more complicated than simply tuning in to tempo. Music draws up — and draws from — memories, emotions and pleasure and reward activity in the brain. Other acoustic qualities like melody, harmony and timbre also play important roles. And our conscious ability to apply symbolic meaning to sounds, lyrics and song — and to recognize when listening to music that what we're listening to is supposed to be music — also certainly influences human musical perception.

But the work of Poeppel and others suggests that a tonal time perception hinted at in apes and more fully formed in man could be a prerequisite for discerning a song. Musical appreciation might begin with our brains simply staying on beat.

Bret Stetka is a writer based in New York and an editorial director at Medscape. His work has appeared in Wired and Scientific American and on The Atlantic.com. He plays a Fender Jaguar, often very slowly. He's also on Twitter: @BretStetka