Accessibility links
Most Medicaid Patients Can't Get Advanced Hepatitis C Drugs : Shots - Health News Effective treatments for hepatitis C cost as much as $95,000. Medicaid in many states, including Indiana, is mostly limiting the drugs' use to very advanced cases. ACLU of Indiana is suing the state. 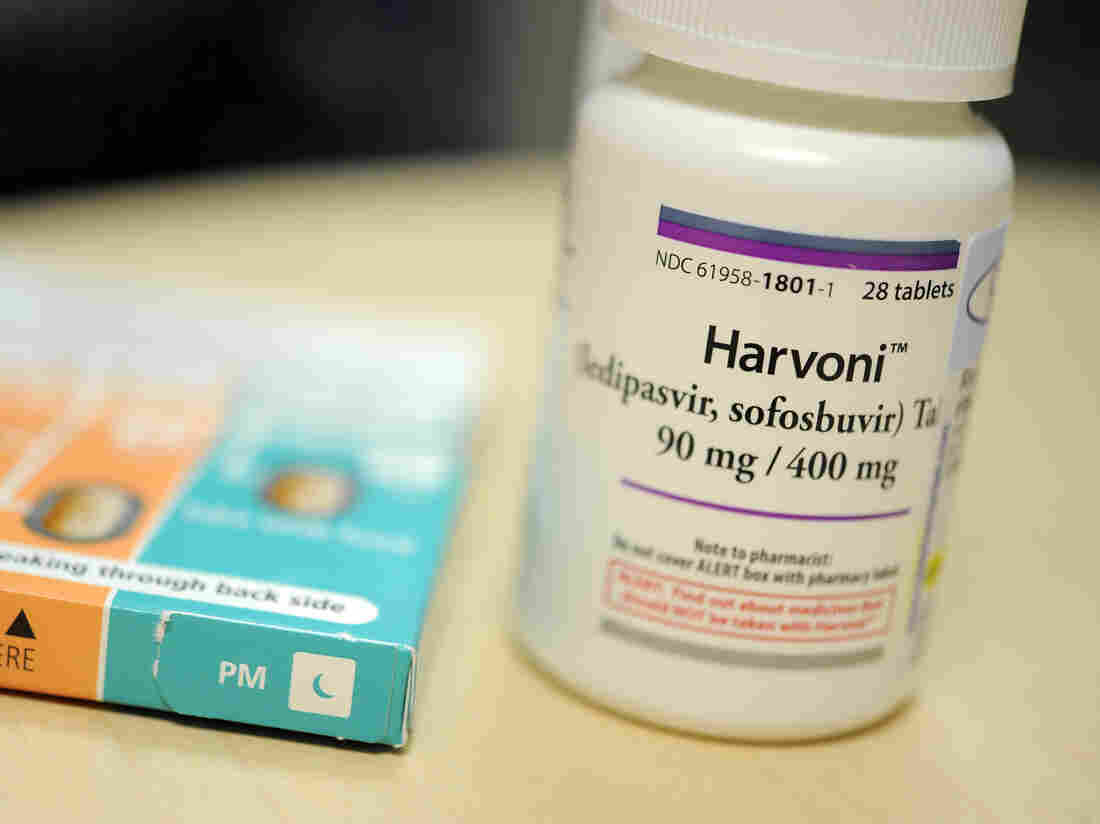 A 12-week regimen of Harvoni is 90 percent effective in curing an infection with hepatitis C, doctors say. It also costs about $95,000. Baltimore Sun/TNS via Getty Images hide caption 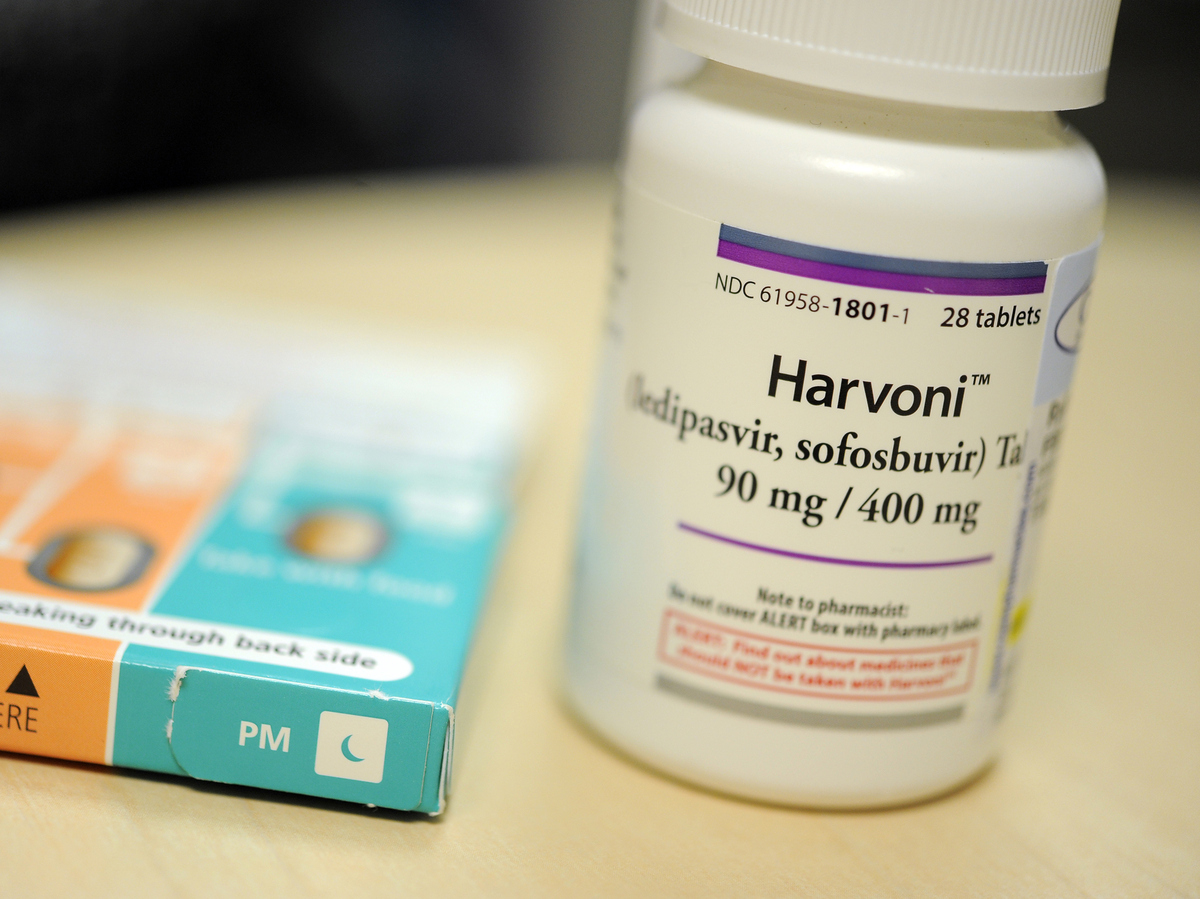 A 12-week regimen of Harvoni is 90 percent effective in curing an infection with hepatitis C, doctors say. It also costs about $95,000.

Sarah Jackson had quit abusing drugs, been sober for six months, and was looking forward to starting a career and raising her kids in Fort Wayne, Ind., when she found out she was infected with hepatitis C.

"That was weeks of not sleeping and just constant tears," Jackson says. "I had already put a lot of that behind me and had been moving forward with my life, and this was just a major setback."

To get rid of the infection, her doctor prescribed Gilead Sciences' drug Harvoni, one of a new generation of highly effective hepatitis C medications. But Jackson never started the treatment because her health insurer, Indiana Medicaid, refused to pay for it.

"There's nowhere else to go," says Jackson. "The doctor tried, and now I have no other place to turn."

According to the Centers for Disease Control and Prevention, more than 3 million people in the United States are infected with hepatitis C, a virus that can destroy the liver and cause liver cancer. The number of infections is increasing, with most new cases attributed to the abuse of injection drugs. Only about 15 to 25 percent of people who become infected will clear the virus from their bodies without treatment, the CDC says.

In the last few years, some new medicines have come on the market that can cure hepatitis C more than 90 percent of the time. But these drugs are few, and famously expensive. A full, 12-week course of Harvoni, for example, costs about $95,000. Because of that, many states have put restrictions on which Medicaid patients can get the pricey treatment.

In at least 34 states, Medicaid (which is jointly funded by the federal and state government) doesn't pay for treatment unless a patient already has significant liver damage, according to a report released in August. There are exceptions; for example, Medicaid patients who also have HIV or who have had liver transplants are sometimes eligible for one of these drugs.

But many people with hepatitis C have no recourse but to worry and wait for their illness to progress before Medicaid will authorize the expensive treatment.

"It is just not feasible to provide it to everyone," says Matt Salo, director of the National Association of Medicaid Directors. "States have to make sure that we're going to prioritize and that those who need it the most get priority treatment. And that's what you're seeing."

Drug manufacturers give states a discount, but Salo says even if the price of the medicines were cut in half, treating everyone who has hepatitis C would still cost too much for states' limited Medicaid budgets.

For instance, officials in the state of Washington estimate that even with discounts, treating everyone on Medicaid for hepatitis C would cost three times the state's total pharmacy budget.

States are caught between drugmakers' high prices and critics who say that rationing care is illegal.

Rose wants the Indiana restrictions lifted. He's representing Sarah Jackson in a class action lawsuit filed against the Indiana Family and Social Services Administration, which administers Medicaid payments. Rose cites a recent letter from the Centers for Medicare and Medicaid Services, reminding states of their responsibility to make the drug available to medically qualified patients.

Furthermore, he argues, treating hepatitis C early would keep the virus from advancing and from spreading from person to person, so would actually save money in the long run.

Many people on both sides of this Medicaid fight say the new drugs for hepatitis C are simply too expensive. Even the U.S. Senate criticized the pricing of Sovaldi, another hepatitis C drug from Gilead, in a report released earlier this month. All told, states spent $1 billion last year on Sovaldi, the Senate investigation found.

Salo says a new treatment from Merck is expected to come to market early next year, and that might drive down the prices. "We are cautiously optimistic on that," he says.

In the meantime, Sarah Jackson hopes her lawsuit will get traction. "This is weighing over me every day," she says. "I have to worry about it all the time."

Despite the anxiety, she says she's willing to go through with the legal case in hopes of helping other people with hepatitis C, who, like her, just want to be cured.

This story is part of NPR's reporting partnership with Side Effects Public Media and Kaiser Health News.