Accessibility links
Service Dogs May Help Veterans Cope With PTSD : Shots - Health News Service dogs help veterans with physical disabilities, and there's increased interest in using dogs for symptoms of post-traumatic stress disorder, too. A study is underway to see whether that helps. 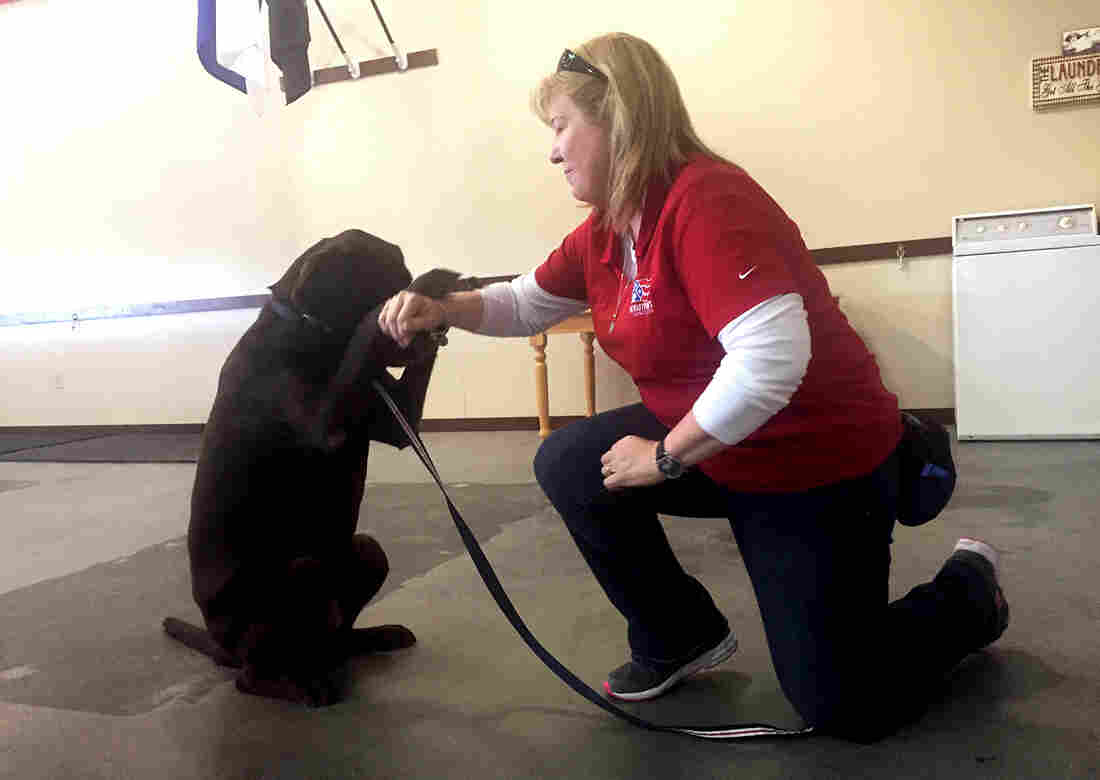 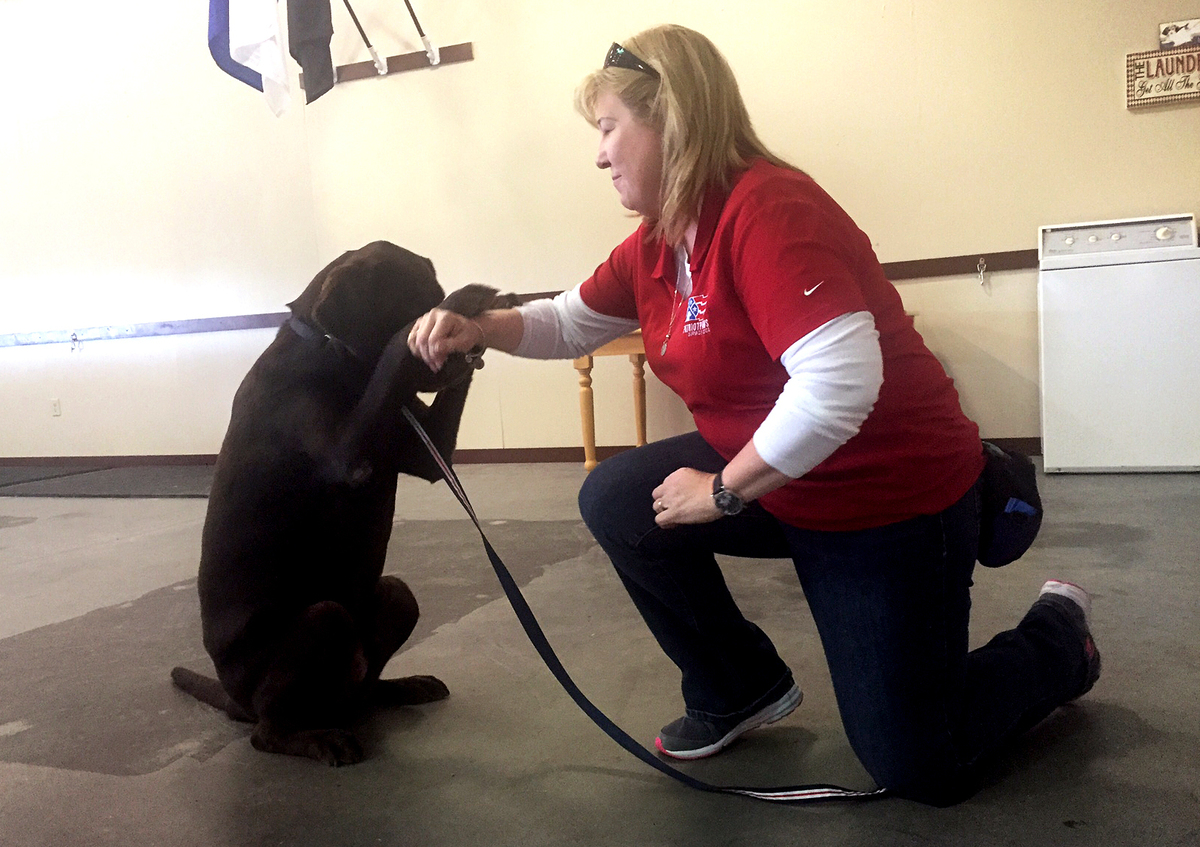 At a warehouse near Dallas, a black Lab named Papi tugs on a rope to open a fridge and passes his trainer a plastic water bottle with his mouth.

Service dogs are often trained to help veterans with physical disabilities. Now, a growing number are being trained to meet the demand from vets with post-traumatic stress disorder and other mental health issues.

Those dogs learn extra tricks — how to sweep a house for intruders, for example, so a veteran feels safe.

"We teach them something called perimeter, where they go into the house and they check, they just touch all the doors and all the windows," says Cheryl Woolnough, training director at Patriot PAWS, a nonprofit in Rockwall, Texas, that provides service dogs.

These dogs also learn how to create personal space for a veteran by stepping in front or behind the owner to block people from approaching.

Most veterans who apply for a service dog have PTSD, often on top of physical disabilities, according to Terri Stringer, assistant executive director of Patriot PAWS. "We have 100 veterans on our list waiting for dogs, so we have to get more dogs," Stringer says.

So far, though, the Department of Veterans Affairs won't help pay for service dogs for PTSD, citing a lack of scientific evidence. But it's launching a study to find out what effect specially trained service dogs can have on the lives of veterans with PTSD. Vets with PTSD who already rely on service dogs say the research should have been done years ago.

The training process for these service dogs is complex.

It starts with puppies — often Labs, poodles or Labradoodles. The little guys get their shots and learn simple commands first. Then they go either to a puppy raiser who teaches them to behave in public places or they go to prison, literally. Stringer calls it the "big doghouse." 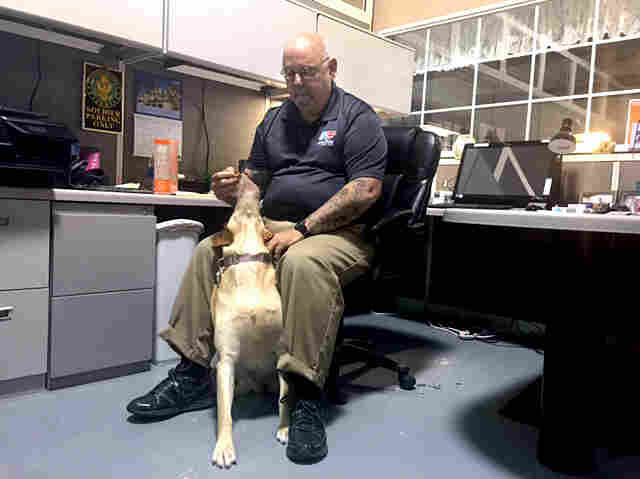 Jay Springstead, a Vietnam veteran who has post-traumatic stress disorder, started working at Patriot PAWS after his youngest son, an Iraq combat vet who also had PTSD, took his own life. Lauren Silverman/KERA News hide caption

"Prison is where they get their hard-core training," she says. "They're with the inmates 24 hours a day."

The inmates teach the dogs dozens of commands. Patriot PAWS relies on three Texas prisons for the type of intensive training the dogs need to be paired with veterans. It takes more than two years and costs about $30,000 per dog. The few veterans lucky enough to make it to the top of the list each year get dogs at no charge.

Jay Springstead, who lives outside Dallas, still has nightmares from combat in Vietnam 40 years ago. "A service dog for post-traumatic stress can actually help you get out into the public and regain some of that independence that you've lost," he says.

Springstead started volunteering at Patriot PAWS after his youngest son took his own life.

"Both my sons were Iraqi combat veterans; my youngest one had severe post-traumatic stress," he says. "So I'm familiar with the symptoms and I also know how important dogs are to anyone's recovery."

Springstead and many others are frustrated that the VA is not providing financial assistance to veterans who use service dogs to cope with PTSD.

It's a complaint Patricia Dorn, director of the VA's Rehabilitation Research and Development Service in Washington, D.C., has heard repeatedly. She says that while there is plenty of scientific evidence of the benefits of service dogs for people with physical disabilities, there's little in the area of mental health.

"We understand, veterans are not happy with the agency in that we're not just providing this benefit," Dorn says. "But for an agency with [over] 150 hospitals and millions of veterans we serve, we need to have the evidence base to make a determination."

That's why the VA is conducting a randomized controlled trial on service dogs with 200 veterans with PTSD from Atlanta; Iowa City, Iowa; and Portland, Ore.

Dorn says researchers will assess veterans' quality of life over a three-year period.

This isn't the first time the VA has tried to study service dogs and PTSD. An earlier effort was halted in 2011 after two service dogs bit children in veterans' homes. The current study, Dorn says, has stricter standards for dog training and a more rigorous study design.

In the meantime, Springstead says veterans sometimes get tricked into buying dogs that aren't properly trained. Patriot PAWS is one of a few dozen organizations in the country accredited through Assistance Dogs International, but there's no standardized training specific to mental health.