Accessibility links
Friends, Romans, Countrymen, Lend Us Your Toilets (Without Parasites) : Shots - Health News The Romans are famous for their baths, aqueducts and toilets. But the sanitary innovations might not have done as much to improve health as was once believed.

Friends, Romans, Countrymen, Lend Us Your Toilets (Without Parasites)

Friends, Romans, Countrymen, Lend Us Your Toilets (Without Parasites) 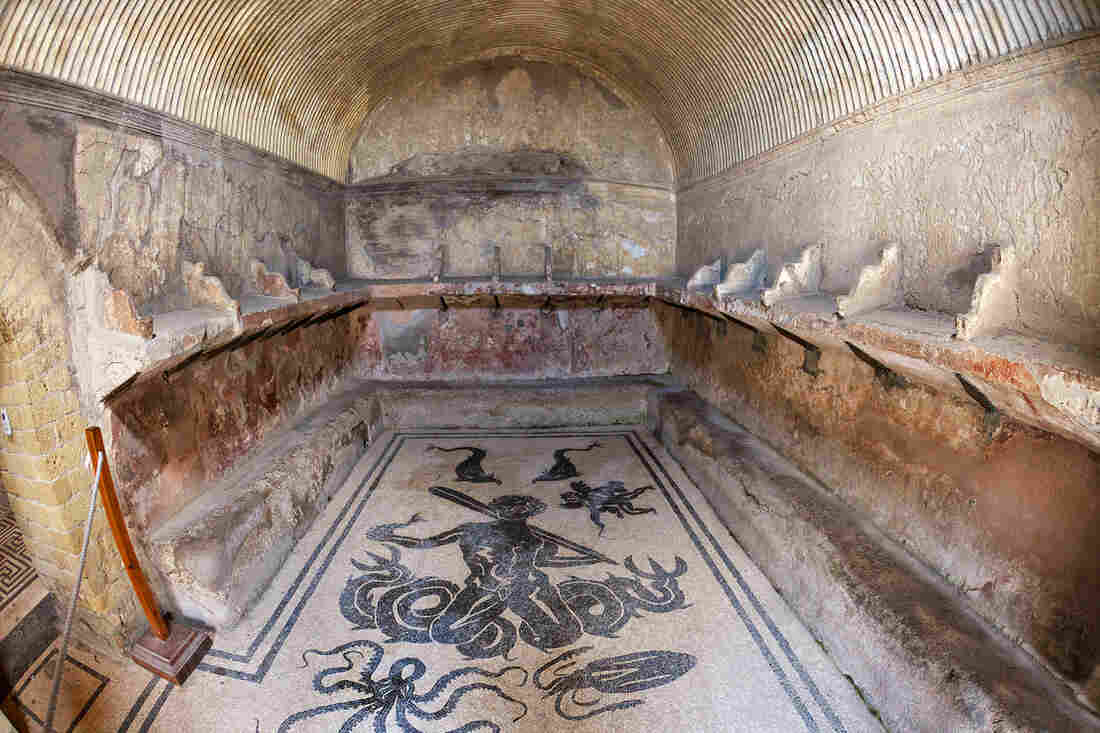 Romans would have gathered in this heated room during a visit to the bathhouse in Herculaneum, in what is now Campania, Italy. Peter Barritt/Robert Harding/Corbis hide caption 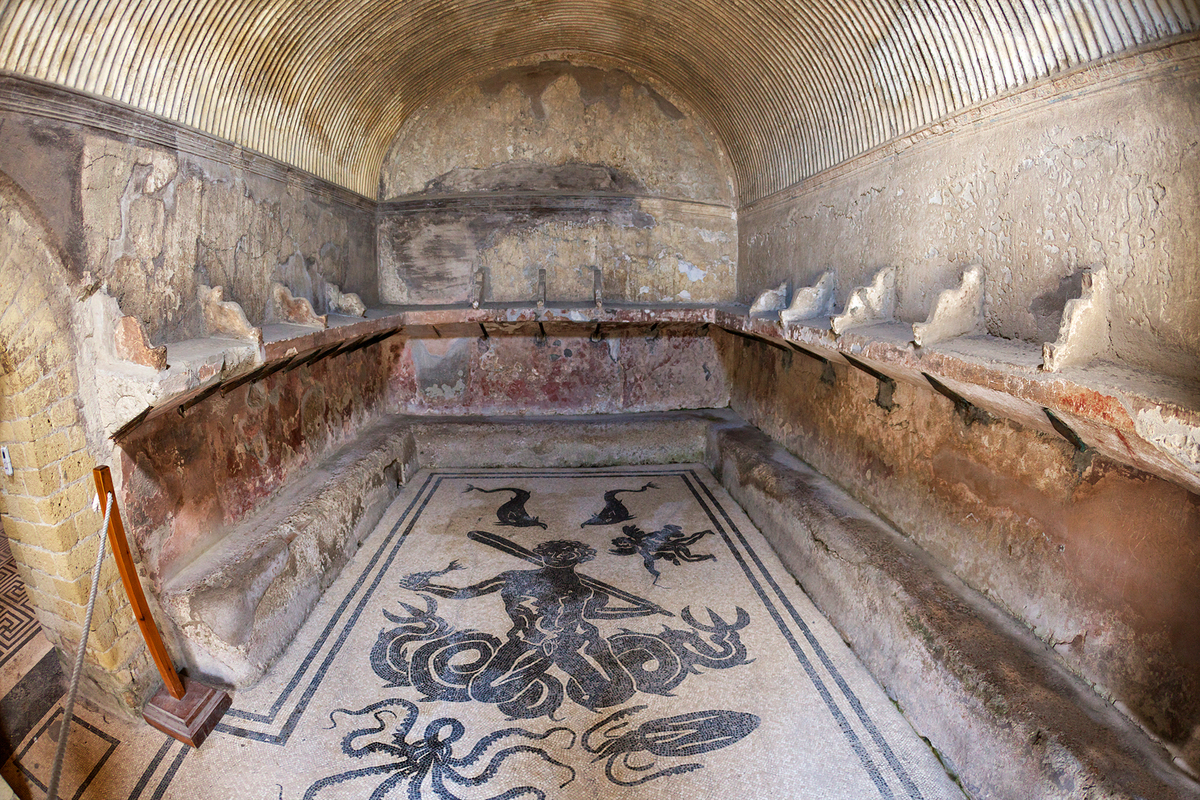 Romans would have gathered in this heated room during a visit to the bathhouse in Herculaneum, in what is now Campania, Italy.

When the Romans expanded their empire across three continents, they probably seemed like the neat-freakiest people to attempt global domination.

"And all these things you'd think would make the population healthier," says Piers Mitchell, a paleopathologist at the University of Cambridge. After all, he says, research in modern populations shows that if you use a toilet, wash your hands and drink clean water, you're less likely to have parasites and disease.

But Mitchell writes Thursday in the journal Parasitology that the empire's hygiene focus doesn't seem to have improved its population's health. At least, not by certain measures.

He rounded up literature from the past few decades that had analyzed remains at Roman sites for parasites and disease. The researchers had looked at samples like mummies, fossilized human poop, the contents of ancient latrines, cesspits, trash piles, combs and the soil around where skeletons' intestines would have been.

Mitchell then mapped the presence of those Roman-era scourges against the geographic presence at earlier sites dating to the Bronze and Iron Ages.

"I thought we'd see a drop in the intestinal parasites that are spread by feces and poor sanitation compared with the Iron Age, when there weren't any toilets. But, in fact, I didn't see a drop at all," says Mitchell.

The intestinal parasite whipworm appeared at sites in eight countries, and roundworm in six. People pick those up when they eat food contaminated with human feces, which can happen when the people preparing food don't wash their hands. (Mitchell also posits that the Romans may have spread a humongous tapeworm from northern Europe as they carted their favorite condiment, fermented fish sauce, around the empire.)

On the surface of their bodies, the Romans appear to have hosted fleas, bedbugs and three varieties of lice. Excavation of a site in York, England, showed that despite all the time they spent in public baths, "the Romans had just as many body lice and fleas as the Vikings, who are regarded as fairly smelly, unclean people," Mitchell says.

The load of pests likely affected Roman health. Fleas and lice can spread bacterial disease like typhus, trench fever and bubonic plague. Hookworm can cause anemia. Pinworm causes an itchy bum at night. And a single-celled parasite that showed up in Roman cesspits in Belgium, France and Italy causes dysentery.

He thinks the Romans' unexpected infestations might have been because of a major flaw in their cleanliness habits. Human waste hauled out of town was sometimes dumped onto food crops. Waste collectors called stercorarii would haul solid waste out of town and sell it to farmers as fertilizer. Without prolonged composting, Mitchell explains, parasite eggs could have gotten onto the plants and later reinfected the people who ate them, possibly canceling out the benefits of the Romans' more hygienic practices.

Brandeis University archaeologist Ann Olga Koloski-Ostrow, who wasn't involved in the research, thinks the hypothesis is reasonable. She has written two books on Roman sanitation, and she isn't surprised by the notable parasite presence.

Koloski-Ostrow says wealthy folks in Pompeii, Rome and Herculaneum opted not to connect their private toilets to the sewer system, maybe because they were afraid of what might climb out. "You'd have a cesspit in your house garden or near your kitchen where you can do your business," she says. "And then maybe every six months or every year, you'd have the slaves dig it out and dump the excrement into your garden or sell it to some guy coming around with a wagon who's going to take it out of the city and use it for agriculture."

There was just one problem. "Of course all this transported excrement is going to increase parasites," says Koloski-Ostrow.

She pegs lofty assumptions about Roman cleanliness on 19th century academics who first excavated sites like Pompeii and Herculaneum. Back then, she says, archaeologists wanted to see themselves "as the inheritors of a Roman ideal of cleanliness and high culture and sophistication, and no one really wanted to dig into the nitty-gritty of Roman daily life."

It was easy to avoid evidence about how inescapable the head lice were, how common diarrhea and tuberculosis were, that togas may have been washed with urine, or the likelihood that people might have dipped into the communal bathtubs with open lesions, diarrhea and a cough.

"They didn't understand germ theory," she says. "But that's not to say all of Roman life was filthy and disgusting." After all, they made clean water and public facilities available to everyone, including low-status citizens.

"I don't think the last word has been said about Roman sanitary practices or how clean or not clean the Roman world was," Koloski-Ostrow says.

And whether or not they had more parasites than their Iron Age counterparts, Mitchell adds, at least they probably smelled better.