Accessibility links
Dance Returns The 'Joy Of Movement' To People With Parkinson's : Shots - Health News Many struggle with tremors and balance much of the time, but when the music starts, these people dance. It gives them joy — body and soul. Scientists say dance might have lasting brain benefits, too. 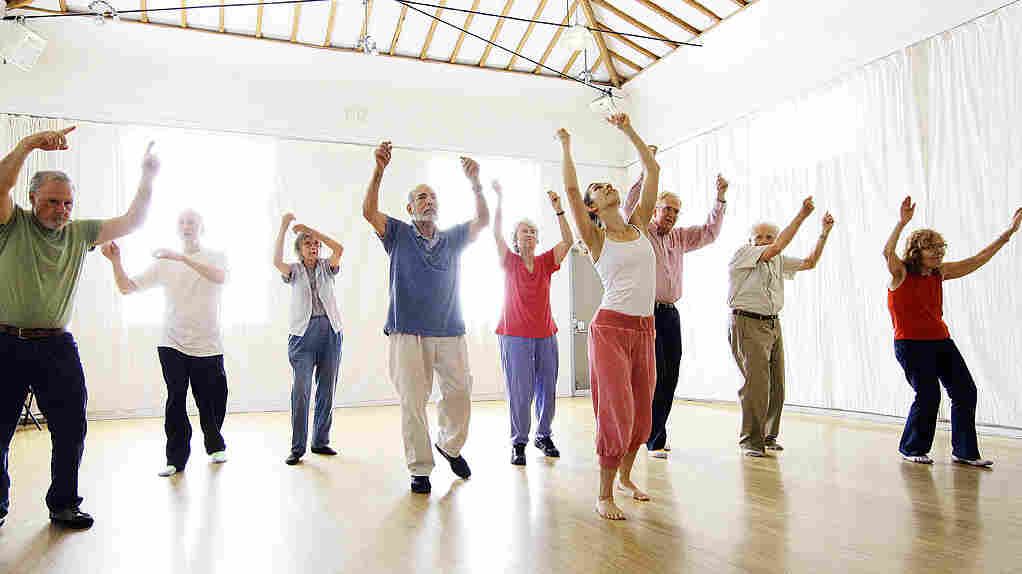 The routines that students learn at Dance for PD classes in Venice, Calif., can be quite challenging, instructors say. Courtesy of Joe Lambie and Laura Karlin hide caption 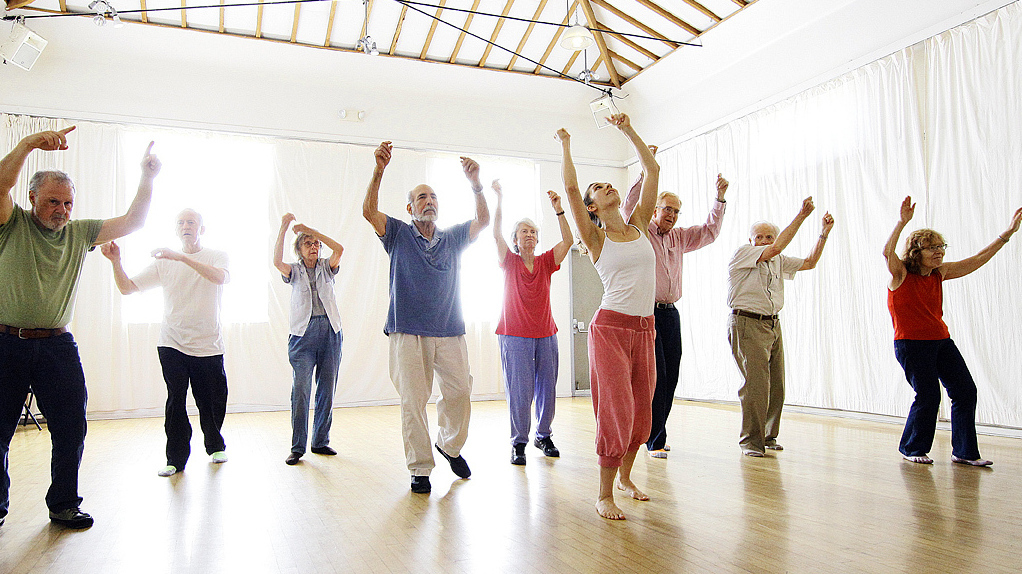 The routines that students learn at Dance for PD classes in Venice, Calif., can be quite challenging, instructors say.

If you pictured a dancer, you probably wouldn't imagine someone with Parkinson's disease. Worldwide, there are 10 million people with the progressive movement disorder, and they struggle with stiff limbs, tremors and poor balance.

But over the past 15 years or so, a few thousand have taken dance classes that are part of a program called Dance for PD. It began in Brooklyn and has spread throughout the country and around the world. It has also attracted the attention of scientists interested in the ways dance might ease symptoms.

The program in Venice, Calif., is in its fifth year. One recent afternoon, "Broadway Baby" blasted from the sound system as nearly two dozen people tried to imitate the movements of instructor Linda Berghoff. The students are people with Parkinson's and their spouses or caregivers. For the moment, everyone was seated, but with bodies pulled upright, arms stretched and fists pumping in time to the music.

It was a challenging routine, keeping a one-two beat with one arm, and a three-part rhythm with the other. Berghoff shouted encouragement over the music. She's lean and fit and looks younger than her 65 years. Though never a professional dancer, she's danced all her life — even after her own diagnosis of Parkinson's disease 10 years ago.

"When I was diagnosed, the thought that I would no longer dance again terrified me," she tells Shots. "I'd be stripped of the thing I love the most."

The diagnosis was also a blow to Laura Karlin, a long-time friend who describes Berghoff as her second mother.

The dance class was the winner. And a reasonable choice, considering that Karlin is the artistic director of the Invertigo Dance Theatre, which has a performing company and also offers classes. Invertigo's dance class tailored to people with Parkinson's disease began in 2011; the company now sponsors five such courses around the L.A. area. 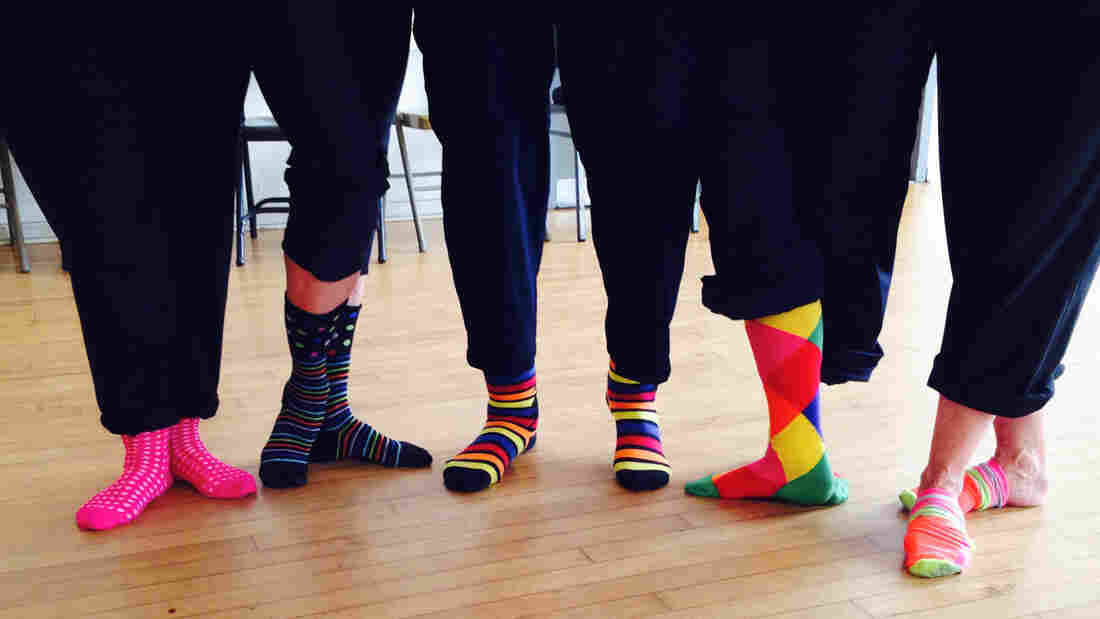 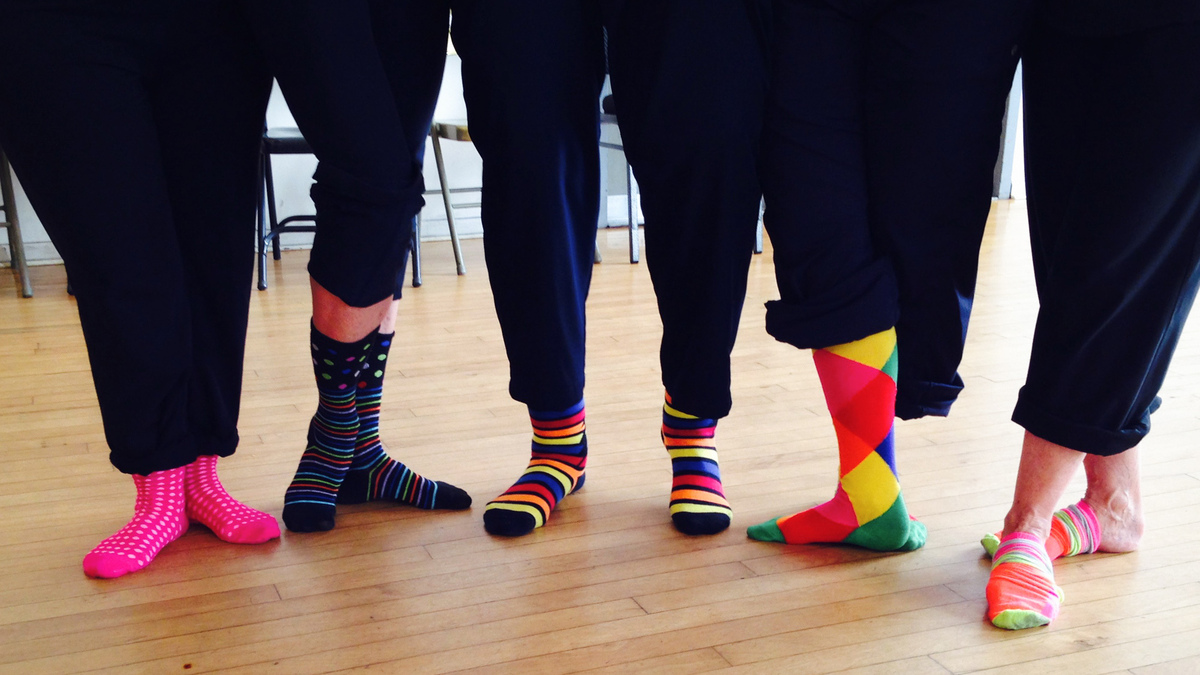 Dance students and teachers strike a pose at Invertigo Dance Theatre's class for people with Parkinson's.

And each one is a real dance class, Karlin says.

"We don't dumb it down. I believe very much in making this a really joyful and challenging experience," she says. "But it has to be both challenging and kind of satisfying."

Karlin learned what she needed to know to start her Parkinson's program at the Mark Morris Dance Center in Brooklyn, where Dance for PD began about 15 years ago. David Leventhal is the director of the Mark Morris program. At the beginning, he says, it was trial and error because "there's no one type of Parkinson's, no one set of symptoms."

The Neuroscience Of Musical Perception, Bass Guitars And Drake

There are some small, short-term studies that suggest dance might improve some of those symptoms, especially ease of walking. But Leventhal says the class was never intended as just physical therapy.

"There's also an artistic quality," he says, "where we're hoping people are able to say something with those gestures." This is particularly relevant to people with Parkinson's, who start to lose their expressive ability and "feel themselves pull away from who they thought they were."

The program at the Mark Morris Dance Center began as a partnership with the Brooklyn Parkinson Group. But for the past eight years, Mark Morris instructors have been training other dance companies — like L.A.'s Invertigo Dance Theatre — to conduct classes of their own. There are now programs in 40 states and 13 other countries.

"It's such a natural, intuitive idea that dance should be a good thing for Parkinson's, that people have just gone ahead and done it" without scientific verification that it actually helps, says Dr. Pietro Mazzoni. He teaches neurology at Columbia University Medical Center and heads the Motor Performance Laboratory there.

Mazzoni says the few small studies that have been done don't explain why dancing can help people with Parkinson's, or what routine might be better than another, or how long the effects last. So he's beginning a larger study that may answer those questions. 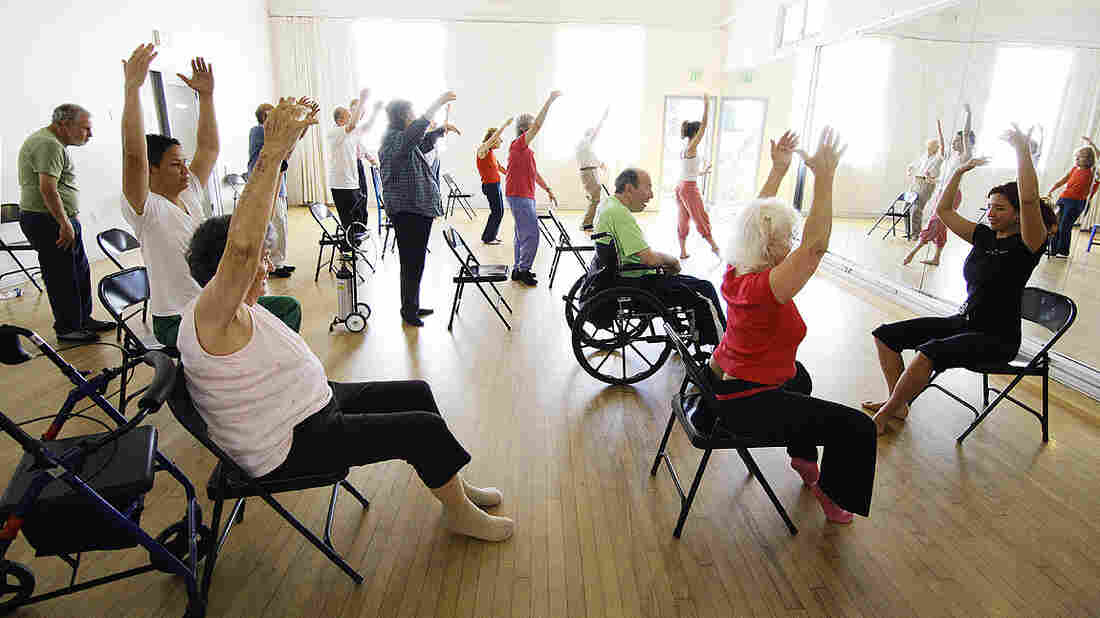 Scientists are only beginning to study whether dance does something for people with Parkinson's that more typical physical therapy can't achieve. Courtesy of Joe Lambie and Laura Karlin hide caption 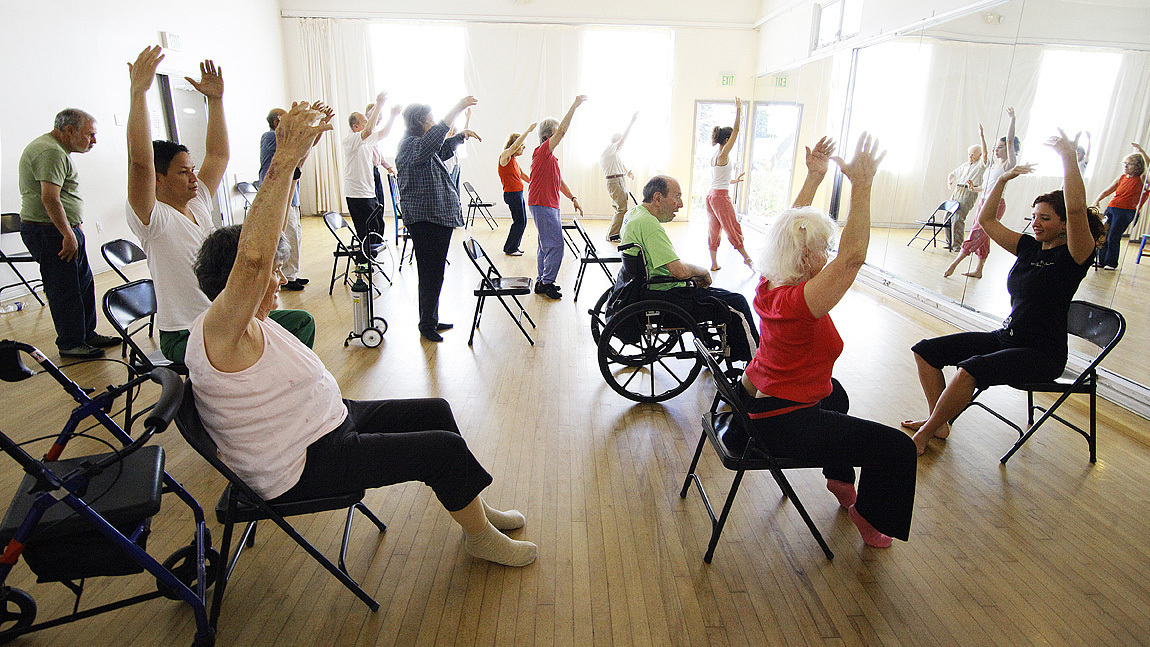 Scientists are only beginning to study whether dance does something for people with Parkinson's that more typical physical therapy can't achieve.

One of the theories he'll be testing is that people with Parkinson's move less because the disease triggers more than tremors and other physical symptoms — it also robs them of their ability to enjoy moving.

"I've heard patients spontaneously describe the beginning of their symptoms using language like, 'I didn't enjoy walking with my husband anymore,' " Mazzoni says. " 'I could do it; it just wasn't fun.' "

So Mazzoni's work will look at psychological factors as well as physical ones. Then he'll compare the dancers to people getting traditional physical therapy.

It seems to be helping 76-year-old Willie Marquez. He and his wife Lenore heard about the dance class from his doctor, when Marquez got his Parkinson's diagnosis three years ago.

"We got in the car and ran over here," he says.

Marquez says taking the class is a "no brainer" because he and his wife have been dancing together since they met — 52 years ago. Willie Marquez was teaching salsa in those days. The couple still moves confidently across the floor, now side by side, surrounded by fellow students.

They're all trying out a new routine and it looks pretty rough. But they throw themselves into it. As Laura Karlin always reminds them, there are no mistakes in dance — just solos.