Accessibility links
Young People Surprised By Risky Synthetic Drugs They Considered Safe : Shots - Health News Cities across the U.S. have seen surges in ER visits and hospitalizations tied to an evolving category of chemical substances, such as K2 or Spice. What can be done? 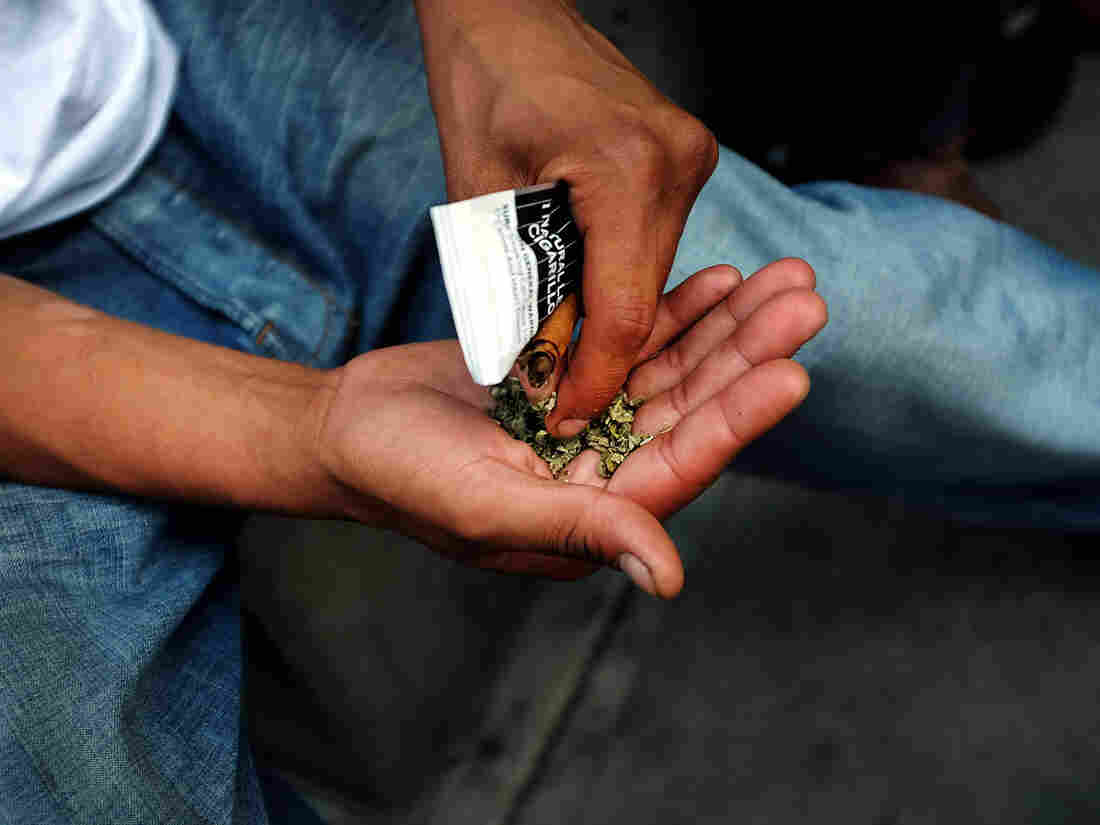 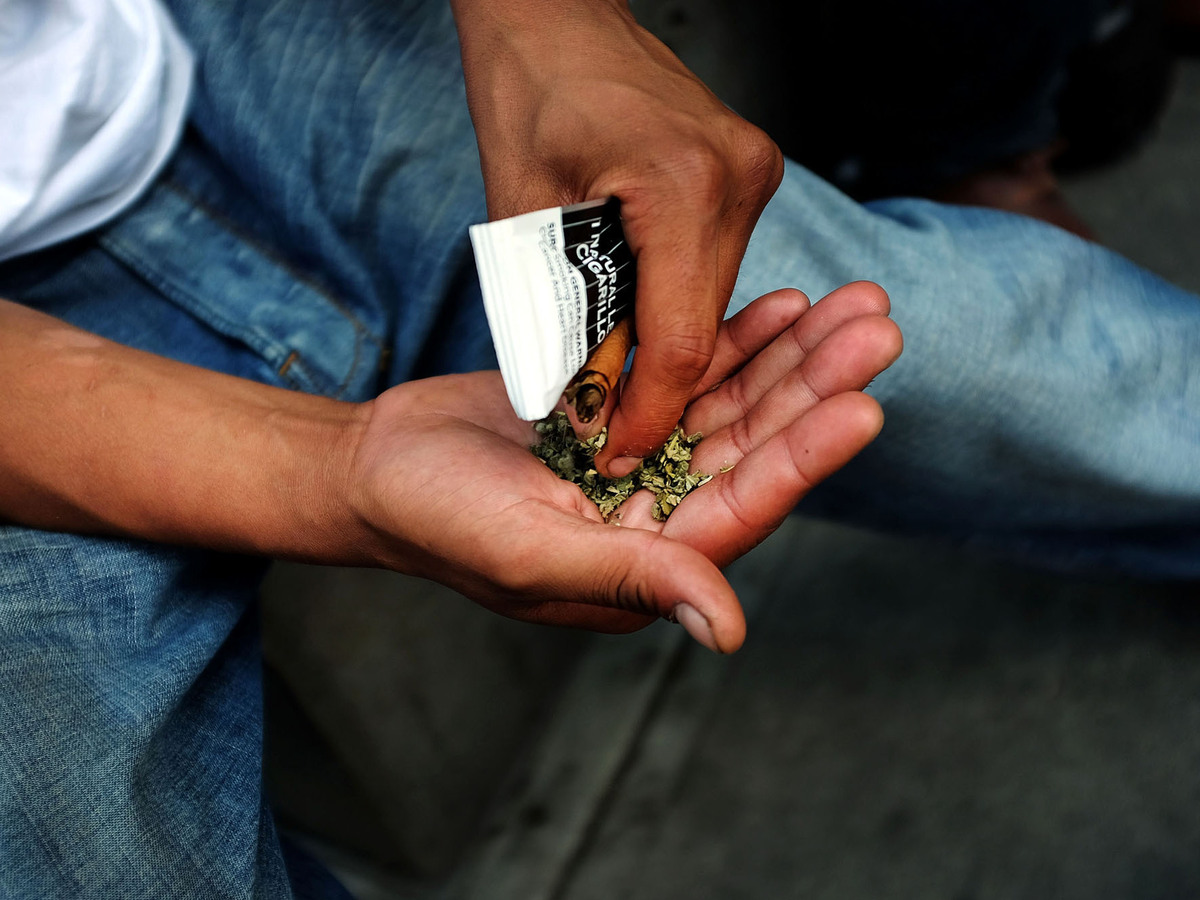 A man prepares to smoke synthetic marijuana on a street in East Harlem in New York City.

My 14-year-old patient grabbed my hand and told me that he was going to die.

Just seconds before, the nurse had wheeled him into the resuscitation room. His blood pressure and heart rate were more than twice the normal levels. He was pale, clammy and gasping for breath.

The nurses and doctors with me in the ER worked to stabilize him. We put an oxygen mask on his face. We inserted two IVs and began pumping fluids into his body. When his oxygen level dropped, we inserted a breathing tube.

In the meantime, we observed that there was no sign of trauma or active infection. The electrocardiogram showed that this wasn't a heart attack. His blood tests were unrevealing.

What was causing his symptoms? It was his friends who told us what happened. They were experimenting with what they said they thought were "totally safe" and "natural" drugs — substances called Spice or K2 that are often referred to as synthetic marijuana.

In the past, the drugs had given the teenagers a quick high. This time, they experienced hallucinations. Some threw up. My patient was the one who got the sickest.

This would be a frightening scenario for any friend or family member, but what makes it worse is that this isn't an isolated incident. In the past two years, cities across the U.S. have seen surges in ER visits and hospitalizations tied to an evolving category of chemical substances known as synthetic drugs.

In Baltimore, where I serve as the health commissioner, we have seen a marked increase in the use of these drugs, along with a spike in adolescents seeking urgent medical care.

Patients present with a range of symptoms, from agitation, hallucinations and psychosis to dangerously high blood pressure and seizures. Most recover with supportive therapy. Some, however, experience irreversible heart, brain and kidney damage. A few die.

How is it that these dangerous drugs can be so widely accessible?

One reason is that they encompass a large of number of compounds. Some are similar to amphetamines; others have ingredients similar to cannabinoids (the active ingredients in marijuana) and are referred to as synthetic marijuana. Since the Drug Enforcement Administration's first ban on some synthetic drugs in 2011, more than 250 similar compounds have surfaced in their place.

Another reason is misleading advertising. Sold in gas stations, corner stores and online, these drugs are marketed as room fresheners, herbal incense, bath salts or potpourri. In fact, they consist of chemicals sprayed onto dried plants and are intended solely for human consumption.

Many young people falsely believe that these synthetic drugs provide a safe and legal alternative with the same high as illicit drugs. However, some synthetic cannabinoids can be up to 100 times more potent than marijuana. Moreover, users don't know which of thousands of chemical combinations they may be taking. Scientists have equated taking synthetic drugs with a game of Russian roulette.

If federal regulation of these substances is so challenging, what can be done to reduce the harmful effects on our youth?

First, local legislative efforts can be effective. New York City and Washington, D.C., are among major cities that passed legislation in 2015 to ban the sale of synthetic drugs. In Baltimore, we introduced a bill to impose civil as well as criminal penalties to sellers. It also allows inspectors to remove these drugs from stores at time of discovery, and provides a mechanism for citizens to anonymously report stores selling these substances.

Second, businesses themselves can take action. After we sent 1,300 letters to local stores, many have posted "Not a Drug Dealer" signs in their windows. Some have voluntarily reported distributors that are illegally selling synthetic drugs.

Third, parents, teachers, pediatricians and others who work with teens should be aware of the dangers of synthetic drugs and speak with children and adolescents. In Baltimore, we launched a public education campaign called "Don't Roll the Dice With Spice." Similar efforts exist in Minnesota, New York City and Washington, D.C.

My 14-year-old patient regained consciousness and recovered without long-term damage. He said that he had no idea that what he took would make him so sick. I hope that other young people will not require a near-death experience to prompt them to avoid these dangerous synthetic drugs.