Accessibility links
CDC Endorses A More Effective HPV Vaccine To Prevent Cancer : Shots - Health News An HPV vaccine that protects against nine strains of the virus that causes cancer gets the nod from the CDC. So does a vaccine for a rare but often lethal form of meningitis. 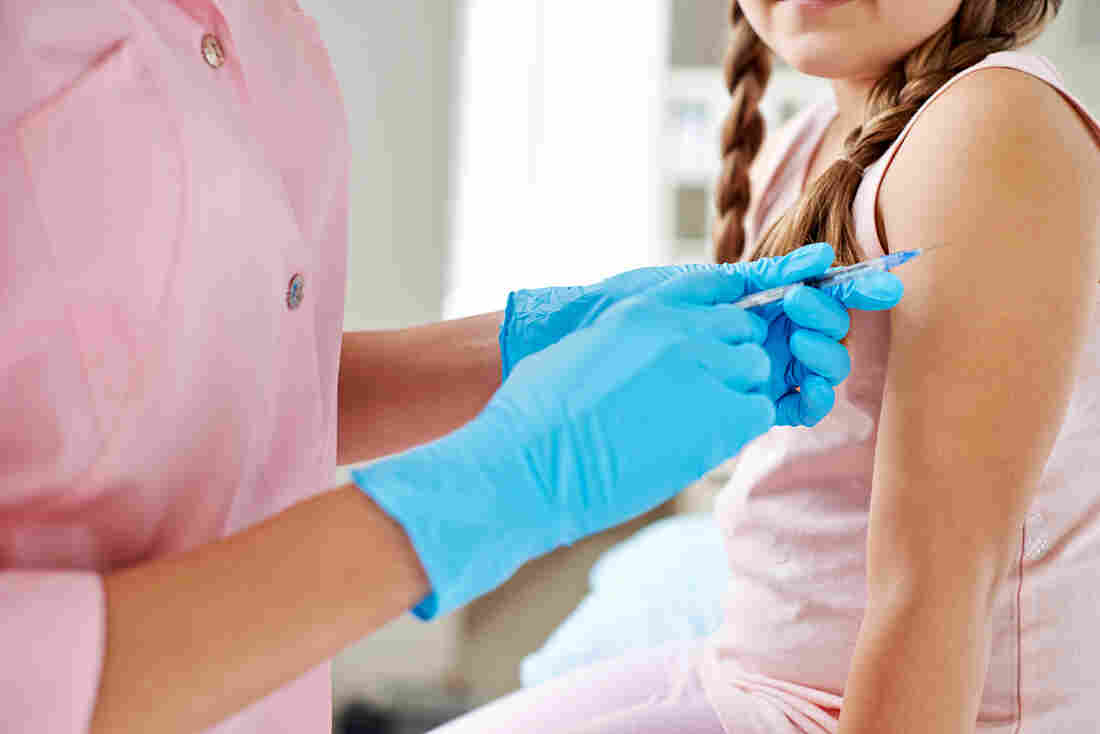 Some doctors have been hesitant to recommend the HPV vaccine for boys and girls. iStockphoto hide caption 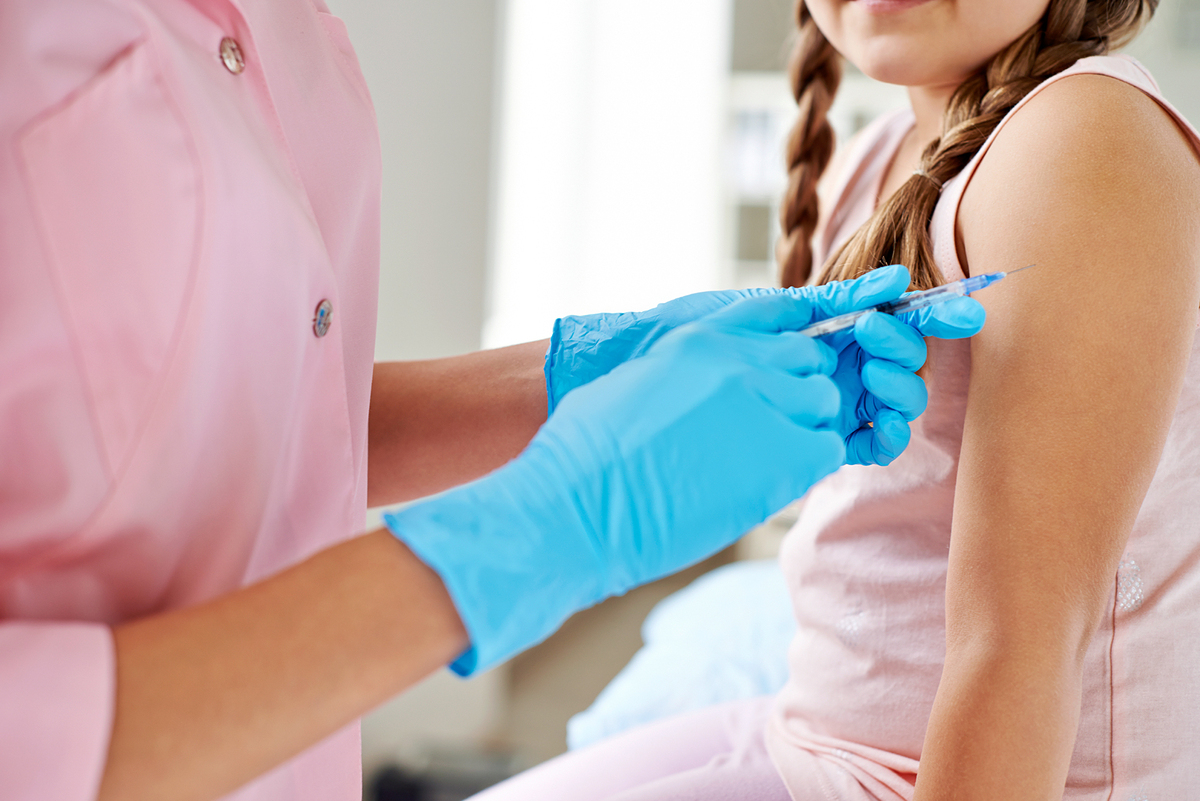 Some doctors have been hesitant to recommend the HPV vaccine for boys and girls.

The updated childhood immunization schedule, released today from the Centers for Disease Control and Prevention, includes a couple tweaks to vaccine recommendations for older children and teens.

One officially moves the recommendation for the human papillomavirus (HPV) vaccine a few years earlier for children with a history of sexual abuse and adds a version of the HPV vaccine that protects against nine strains of the virus. Another offers all older teens the option of a meningitis vaccine previously recommended only for high-risk children.

The HPV vaccine is currently recommended for girls and boys ages 11to 12. The HPV-9 protects against nine strains of HPV, an infection that can lead to cervical and other cancers, including mouth and throat cancers. Though HPV is the most common sexually transmitted infection, it sometimes can be transmitted without sexual contact.

"More than 80 percent of the population will be infected at least once in their lifetime," said Cody Meissner, a professor of pediatrics at Tufts University School of Medicine who was involved in discussions about the new schedule.

The new vaccination schedule recommends that 9- and 10-year-olds receive the HPV vaccine if they have a history of sexual abuse. Studies estimate that one in four girls and one in 20 boys will experience sexual abuse before age 18.

"It is an ubiquitous, tragic and unfortunate reality," said Mark Schleiss, director of pediatric infectious diseases at the University of Minnesota in Minneapolis. Age-appropriate sexual abuse screening questions are already incorporated into well-child visits, he added.

"Perhaps this language will help remind primary care physicians that they need to be asking their patients about sexual abuse," Schleiss said. "These perpetrators are usually someone the child knows and trusts and even loved ones, so it's a very delicate issue, but we just have to get past the denial that these things don't happen to young children."

Child victims of sexual abuse have a higher risk of sexually transmitted infections for several reasons, Meissner said. They may be infected during the first assault or during continuing abuse, and they initiate sex sooner than their peers.

"If a child's been sexually abused, she or he tends to engage in sexual activity at an earlier age and more frequently with a greater number of partners than someone who wasn't abused," Meissner said.

One third of child victims of sexual abuse are younger than age 9, according to the U.S. Department of Health and Human Services Children's Bureau. But 9 is the earliest age the vaccine is licensed for, explained Anna Giuliano, director of the Center for Infection Research in Cancer at Moffitt Cancer Center in Tampa, and a researcher who led HPV vaccine clinical trials.

Parents might wonder how long the vaccine's effectiveness lasts, Giuliano said, but more than 10 years of followup data from clinical trials show it has long-term staying power.

"When we look at how the antibodies have sustained, we anticipate the vaccine will protect out to 30 years or more post-vaccination," Giuliano said. "We have no reason to believe that the protection will wane over time."

Studies have also shown that the immune response to the HPV vaccine is better in children ages 9 to 15 than in those ages 16 to 24, said Wendy Sue Swanson, a pediatrician and executive director of digital health at Seattle Children's Hospital.

"Every vaccine in the schedule is designed around giving it as early as it can be used so it can protect as long as possible," she said. "You don't get any less side effects by waiting for the vaccine, so it makes no sense to wait until they're older."

Yet HPV vaccine uptake has lagged — about 60 percent of girls and 42 percent of boys received at least one dose in 2014 — in part because of doctors' hesitancy.

"We need to help providers to make a strong cancer prevention recommendation for vaccinating 11- and 12-year-old boys and girls with the HPV vaccine," Giuliano said. "If all the pediatricians and family practice doctors were making that strong recommendation, I think we would see a strong increase in the rate of uptake in that vaccine."

Despite finally having a vaccine that can prevent cancer, Meissner said, HPV vaccination rates fall below those of several African countries.

"It's one of the safest vaccines we've got, and it's such a shame that our uptake has been so low," he said.

The other change adds a vaccine against serotype B of meningococcal disease, which causes meningitis, an infection of the covering of the brain and spinal cord. It is now recommended at age 10 for children with increased risk of catching or not effectively fighting the disease. That includes individuals with a missing or damaged spleen, sickle cell anemia or other problems with the body's complement system, which helps the immune system recognize and kill bacteria, Schleiss said.

ACIP also added the meningitis serotype B vaccine as an option for teens ages 16 to 18, an unusual recommendation because it is optional but not universally recommended, unlike other vaccines on the CDC schedule.

"ACIP and CDC are saying, it should be funded, it's safe to give, it's effective in preventing in the short-term infections that are caused by meningitis B, but we're leaving this decision up to the pediatrician and the parents to discuss," Swanson said. "We don't see significant life-threatening side effects from this vaccine, but the risk of your child getting meningitis serotype B is also really low."

Though very rare — the U.S. had about 160 cases in 2012 — the disease is also very lethal, Swanson said: 10 to 15 percent of kids who get meningitis will die even with treatment.

"I'd recommend it for anyone who's a parent of a teenager because this disease is so devastating," Schleiss said.

But Meissner, a member of the CDC meningococcal vaccines working group, said the risk-benefit balance does not justify recommending the vaccine for all teens.

"The burden of diseases is so low that I don't think that's the way the country should be spending its money," Meissner said. "The likelihood of having an anaphylactic reaction to the vaccine may in fact be greater than the odds of deriving benefits."

According to a CDC study last year, a routine meningitis B vaccine recommendation for all teens would prevent approximately 15 to 29 cases and two to five deaths each year. Vaccinating all college freshmen, in light of recent outbreaks on college campuses, would prevent about nine cases and one death a year.

"To immunize an entire population would be expensive and maybe overkill, but it's a safe vaccine and it's really effective, so we want parents and pediatricians who want it to have it," Swanson said.