Accessibility links
High Costs For Drugs Used By A Few Are Starting To Add Up : Shots - Health News A cystic fibrosis drug that is expected to be taken by only a few hundred people may drain almost $36 million from California's general fund over two fiscal years. 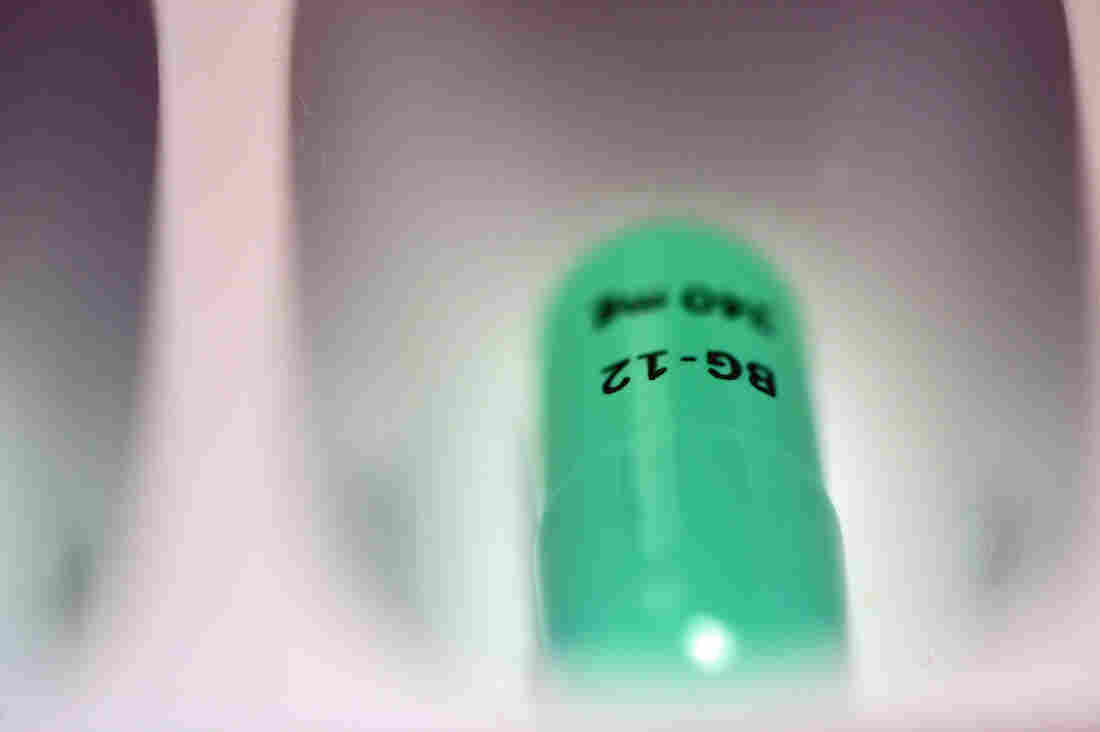 Multiple sclerosis pill Tecfidera is on the top 10 list of most costly specialty drugs, as measured by overall spending, for California's health benefit system for public workers and retirees. John/Flickr hide caption 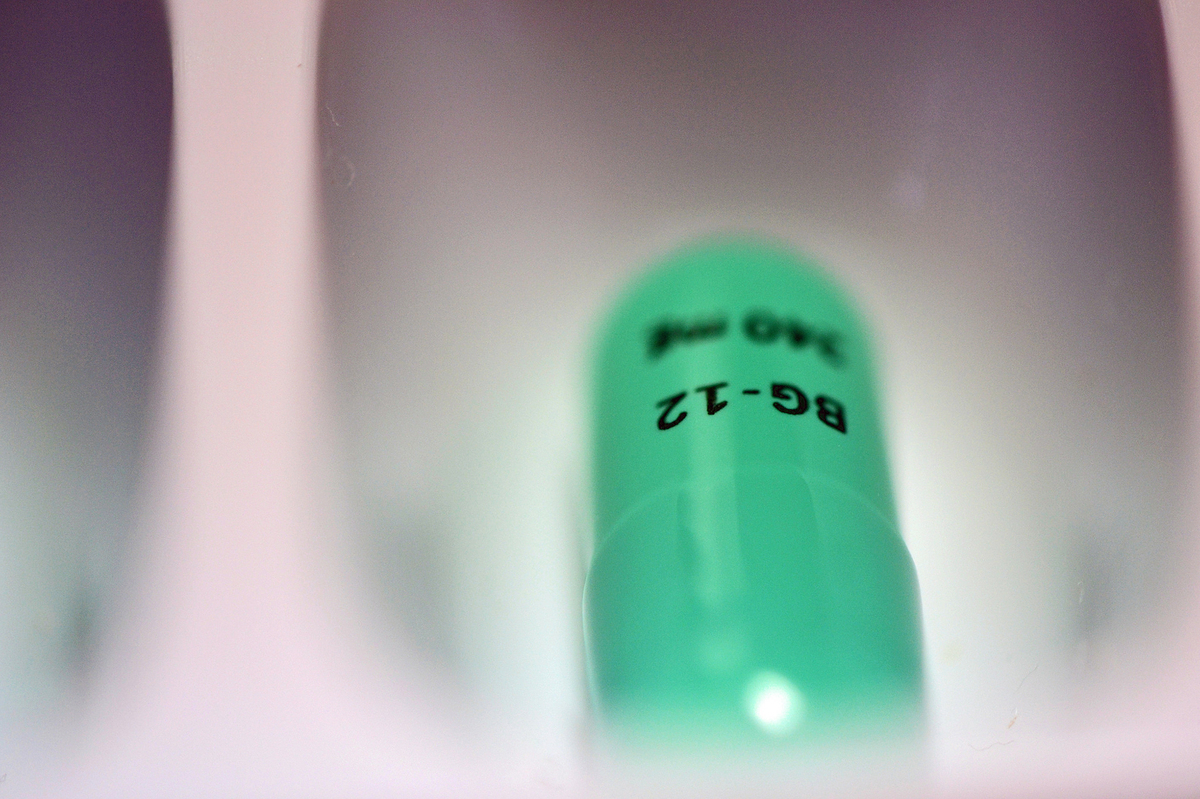 Multiple sclerosis pill Tecfidera is on the top 10 list of most costly specialty drugs, as measured by overall spending, for California's health benefit system for public workers and retirees.

The cystic fibrosis drug Orkambi can help people with specific genetic mutations breathe better, but treatment with the pill comes with a hefty sticker price — $259,000 a year.

Orkambi, which was approved by the Food and Drug Administration last July, is expected to take almost $36 million from California's general fund this fiscal year and next. That cost estimate doesn't include any discounts the state may receive from drug manufacturers.

Seventy-four Californians with health coverage under the Department of Health Care Services are expected to receive the drug in the current fiscal year. In the next one, 220 people are expected to get it, some of whom may be the same patients as this year.

Orkambi is listed on the specialty tier of drug categories in some private health plans. That category is typically reserved for high-cost drugs or, in the federal government's view, for drugs that cost more than $600 a month and are used by a small proportion of patients.

Specialty drugs are already proving to be a financial burden on one California agency, the California Public Employees' Retirement System, which purchases health benefits for active and retired state workers. CalPERS says that specialty drugs made up less than 1 percent of all prescriptions for its members but accounted for 30 percent of the total drug costs in 2014.

Drugmakers say the health benefits from specialty drugs justify their cost.
"Patients are gaining access to medicines that are better treating their diseases or frankly even curing them," said Priscilla VanderVeer, deputy vice president of communications at the Pharmaceutical Research and Manufacturers of America. "Patients are now healthier. They're more productive. They're functioning."

VanderVeer said companies price drugs not just on the cost of production, but on the value the industry believes the drug brings to the health care system, such as efficacy, improvements in quality of life or length of life and the extent to which the medical need for a drug has gone unmet.

The price of the drug also accounts for the cost of developing other drugs and the high risk that a particular drug won't make it to market, VanderVeer said. Only 12 percent of drugs that go through clinical trials get approved, according to PhRMA.

Finally, she said, the sticker price doesn't reflect the final price paid for the drug, which can be heavily discounted through negotiations or because of mandated rebates for Medicaid programs.

Drugmakers are following the money, said Joel Hay, professor of pharmaceutical economics and policy at University of Southern California. Companies invest in specialty drugs that target a small population because their high price tags can be spread over a large insurance pool, he said.

Even though specialty drugs are "ridiculously expensive per treatment episode," Hay said, the cost for each member in a health plan is "just a few cents." Raising the price 10 cents on a diabetes drug, for example, would have a bigger budget impact, he said, because more people have diabetes than cystic fibrosis.

Hay says manufacturers are now less inclined to invest in drugs that treat millions of people, because there is more pushback on price. "Drug companies are for-profit companies obligated to make money for their stockholders," Hay said. "They're not virtuous charitable organizations."

Drugmakers are also investing more in treating uncommon illnesses because there is less competition and therefore more opportunity for profit, said Dr. Helene Lipton, professor of health policy at the School of Pharmacy and Institute for Health Policy Studies at the University of California, San Francisco.

The high price of the drugs affects patients, she noted, because health plans put controls on the drugs so that they're used as a last resort.

"That may mean going through two or more rounds of care with other medications before being able to use the specialty drug," Lipton said.

"The price of drugs is just continuing to go up," said Miller, explaining that the trend is due to both new high-cost drugs coming on the market, and mark-ups of old drugs.

There has been an explosion of drugs costing $100,000 a year over the past decade, for things like cystic fibrosis and cancer, Miller said. And there was a 127 percent price increase of branded drugs that had been on the market between 2008 and 2014, he says.

A California ballot initiative scheduled to go before voters this November aims to rein in drug costs by limiting the amount the state pays for a drug to no more than the lowest price paid for the same drug by the U.S. Department of Veterans Affairs.

A version of this story appeared first on KQED's State of Health blog. CALmatters is a nonprofit journalism venture dedicated to explaining state policies and politics. Pauline Bartolone wrote this article while participating in the California Data Fellowship, a program of the Center for Health Journalism at USC's Annenberg School of Journalism.

Barolone will be exploring how the cost of specialty drugs' affects patient access. If you are a chronic disease patient who is either taking a specialty drug or having difficulty getting the right one, she would like to hear from you. Reach her on Twitter @pbartolone or pauline@calmatters.org.