Accessibility links
Families Near The Huge Gas Leak Wonder: Is Home A Safe Place To Be? : Shots - Health News Most health officials say the small amounts of benzene and other components of the natural gas still leaking in Southern California are probably not a health threat. Still, some parents worry. 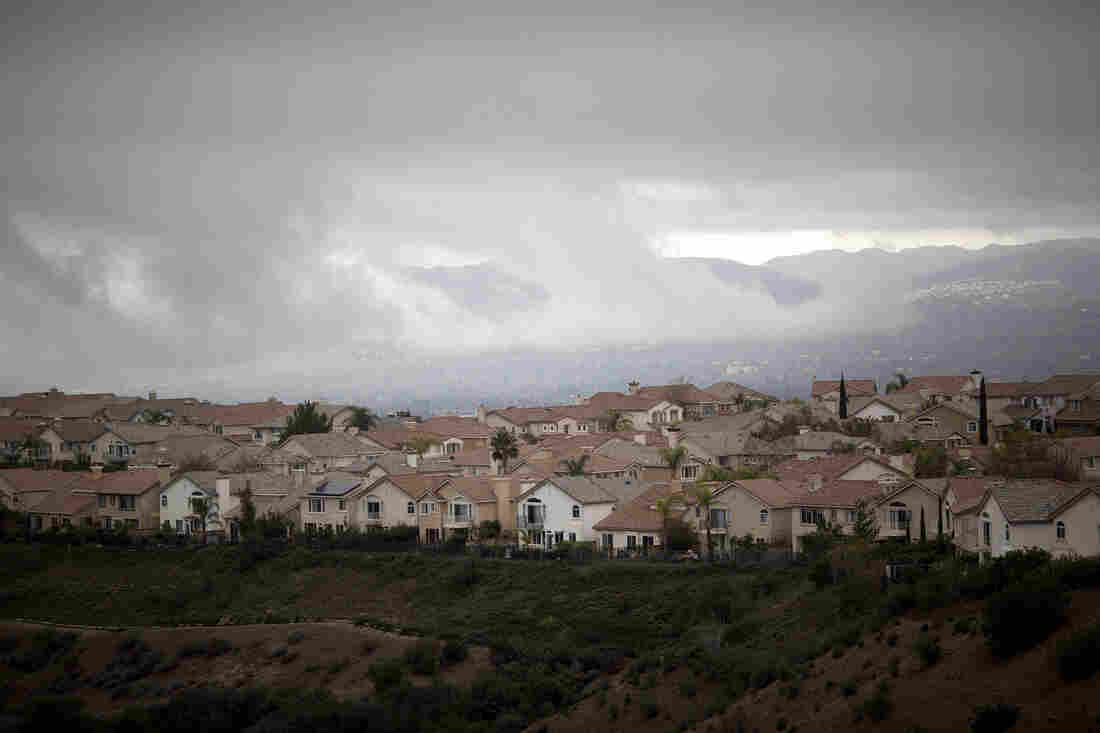 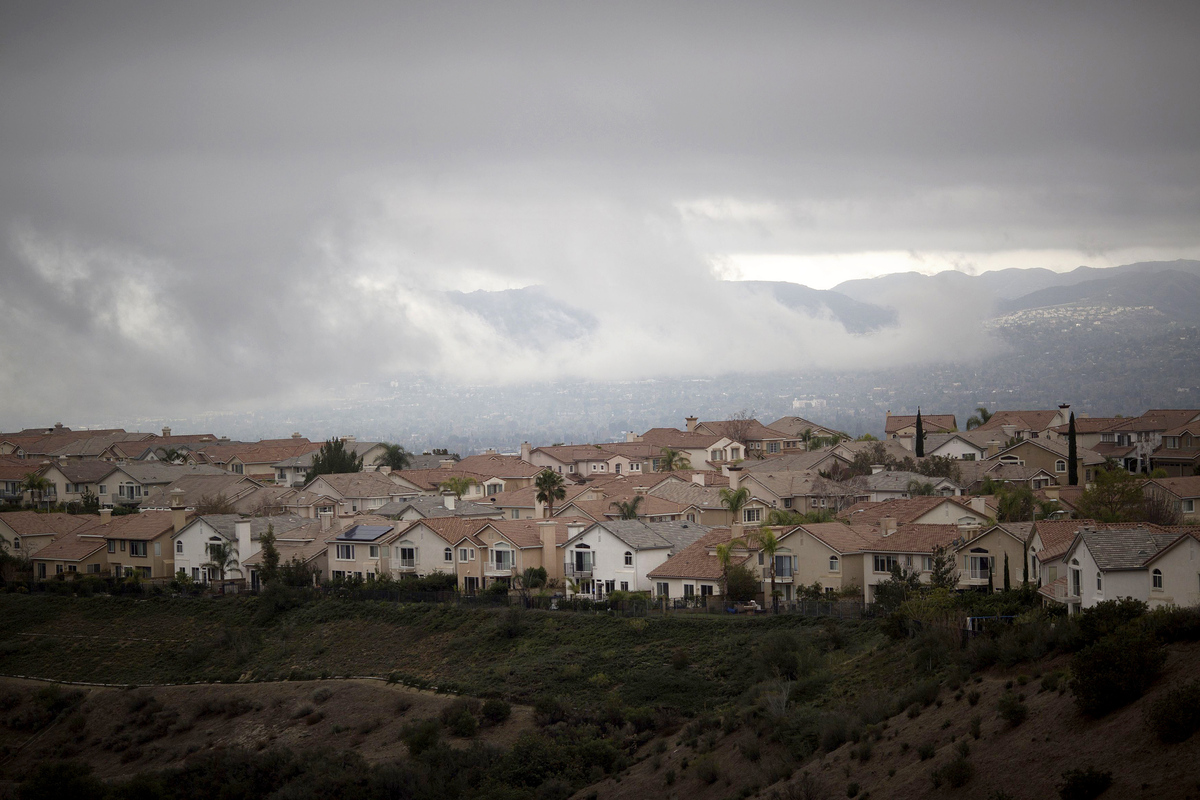 A major natural gas storage well in Southern California is still leaking, though less so than back in late October, when the giant gas leak was first reported. More than 5,000 families and two schools have been relocated since then, and the local utility that operates the facility is now facing several legal actions.

The utility, Southern California Gas Co., now says the leak should be sealed by the end of the month, if not earlier, and also says the gases released will cause no long-term health effects. But some people who live near the leak worry that not enough research has been done to make that claim.

Christine Katz, for example, who has a home in Porter Ranch, a few miles downwind from the leak, remembers first smelling the gas in early October.

"It would start off early in the morning, and then it would kind of dissipate," she says. "Then it continued on each day." She asked her husband if he might have accidentally left their barbecue on. He hadn't.

A couple weeks later, Katz's two-year-old daughter, Ava, got a cough and started wheezing. A doctor put her on an inhaler. That was still before the neighborhood was notified of the gas leak.

In November, Ava got sick again, this time for two weeks. She was extremely lethargic, Katz says — falling asleep in her high chair, or while playing on the grass. Katz's four other kids began having headaches and nosebleeds. Then, one day, Ava developed a high fever, and then had a seizure.

"She was rushed to the hospital, and they couldn't figure out what was wrong with her," Katz says. "So they transported her to Children's Hospital [Los Angeles] and she was in the ICU for four days."

Doctors tested Ava, but couldn't find anything wrong with her, beyond dehydration and respiratory problems, which they remedied.

California state health officials investigating the leak reported last week that "overall, the available air sample data does not indicate that an acute health hazard exists from any of the volatile organic chemicals measured," though it notes that the headaches, nausea and respiratory irritation that many residents have reported could be a response to the odorant the company adds to its natural gas supply.

Christine Katz says Ava's doctors found no evidence the gas leak was to blame for the little girl's fever or seizure. Some of her symptoms — like lethargy, wheezing, and rashes — have been commonly reported by other residents in Porter Ranch. Others, like the fever and seizure, haven't.

Still, Katz believes the gas leak was responsible for her daughter's illness.

So the family moved to a home about 30 miles away. SoCalGas, which was ordered by local officials to relocate residents who lived near the leak, has paid for three-months rent for the Katz's new house. 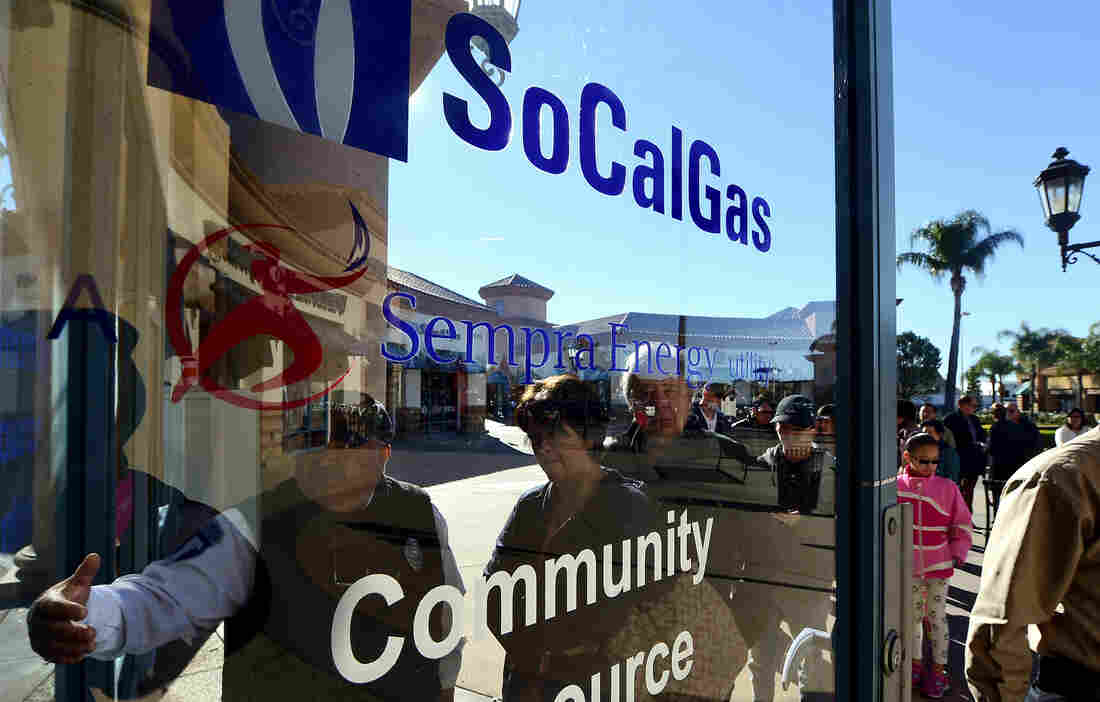 Porter Ranch residents lined up in December to lodge complaints and get information and help with housing at the community resource center that SoCalGas opened in the neighborhood. Frederic J. Brown/AFP/Getty Images hide caption

"She's better and she's happy, and I'll do anything I can to keep her that way," Katz says.

Katz and her husband are now suing SoCalGas for damages, medical expenses and loss of value to their property. And she says she doesn't want to go back to their old house.

"Even though you can't see the gas, it's there," Katz says. "And that's the saddest part — people don't understand it. Because it's not a mudslide, it's not an earthquake. You just don't see the devastation, but it's there."

SoCalGas has set up a help center for local residents at a retail center in Porter Ranch. People who live within five miles of the leak can ask for relocation assistance, free air filters and air cleaning supplies.

Mike Mizrahi, a spokesman for SoCalGas, says the company brought him out of retirement to help handle public relations after the leak. Right now, he says, the utility's two priorities are to stop the leak and to serve the community.

"One of the key questions that folks continue to appropriately ask — it's one that I would ask — is, 'Is there anything I should be concerned about that might be long-term?" Mizrahi says. "And the answer is, 'No, according to public health, according to the air sampling they're doing.' "

The county health department of Los Angeles concurs that "exposures to these chemicals are generally not expected to lead to permanent or long-term health problems."

But Michael Jerrett, who heads the department of environmental health sciences at the University of California, Los Angeles, says such an assessment is "probably overly optimistic." 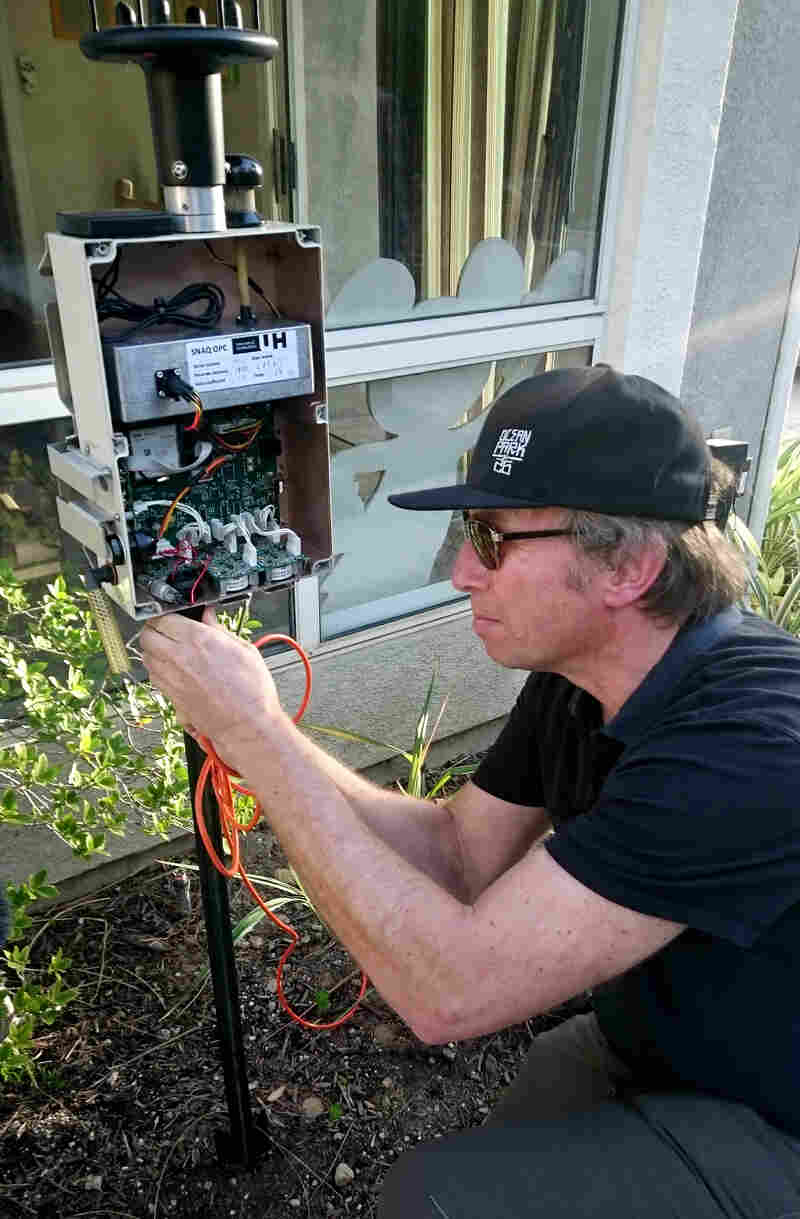 UCLA environmental health researcher Michael Jerrett checks one of the sensors he's placed throughout Porter Ranch. It's checking for a number of air contaminants, including benzene and hydrogen sulfide, as well as temperature and wind direction. Becky Sullivan/NPR hide caption

Jerrett studies the effects of air quality and pollution on health. He agrees that methane — the main component of the natural gas that was leaked — is probably not harmful to people. And many of the symptoms reported, such as nausea, headaches or dizziness, can likely be traced to relatively innocuous, short-term effects of mercaptan — the smelly stuff that's added to methane so you can tell there's been a leak.

But some lesser components of natural gas have been shown to have health effects — at least at higher levels, Jerrett says. Benzene, for example, is carcinogenic, and n-hexane is a neurotoxin, he says, while hydrogen sulfide can irritate the lungs and skin.

There's been a good amount of research about the harmful effects of exposure to high amounts of benzene over a short period, like a matter of hours, Jerrett says. And there's some evidence of its effects over very long periods, such as a lifetime of occupational exposure, say. But there's not much data on exposures over a few months at levels that are higher than normal, but below what the government has deemed an acceptable standard. That's the sort of exposure, he says, that we're likely talking about with the leak at Porter Ranch.

"We're dealing with an area where, unfortunately, there's a gap in the science," Jerrett says. He says that if he were a resident of the area, he too would have relocated his family until the leak was fixed.

"And then," he tells NPR, "I would hope that there was going to be a very rigorous regulatory process that was going to be put in place to prevent this from ever happening again."

In late January, a board of the South Coast Air Quality Management District in Los Angeles ordered SoCalGas to — among other things — complete a study on the potential health effects of the leak.

In the meantime, many families from the area decided not to relocate — including Dhruv Sareen, who does stem cell research at Cedars-Sinai Medical Center in Los Angeles and lives just over a mile from the gas leak.

Sareen says he thinks the Porter Ranch gas leak has turned into a circus of lawyers and misinformation.

"As soon as that started happening — my degree being in chemical engineering and biochemistry — I started studying the numbers and the data," Sareen says. And that data didn't alarm him. 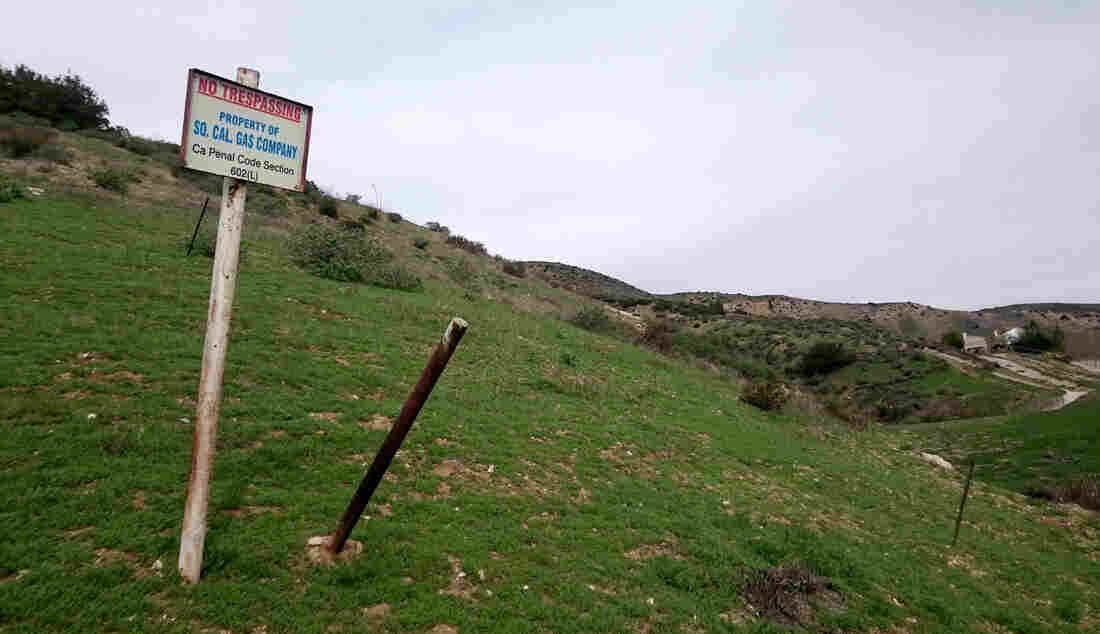 Along a public trail at the base of the large SoCalGas Aliso Canyon Storage Facility, one of the biggest natural gas storage areas in the country. Becky Sullivan/NPR hide caption 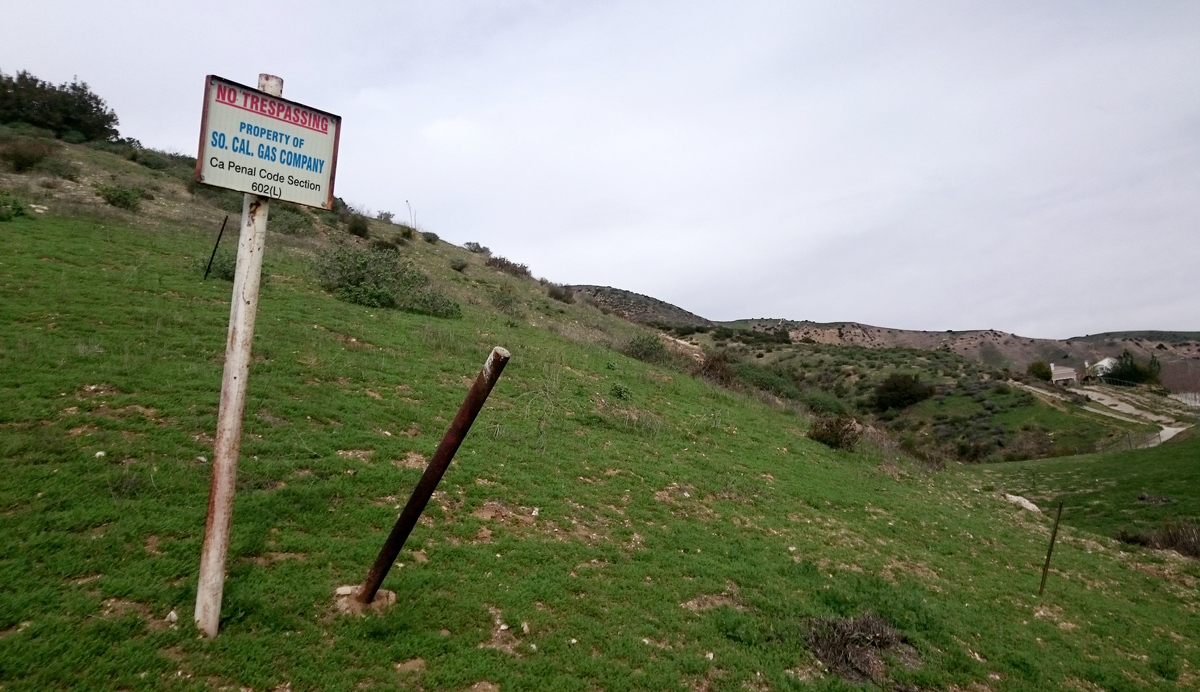 Along a public trail at the base of the large SoCalGas Aliso Canyon Storage Facility, one of the biggest natural gas storage areas in the country.

One of his kids got sick soon after the gas leak, too, he says, but it was just the flu. He's not worried about the quality of the air.

"My parents live in New Delhi," Sareen says. "The particulate matter and the benzene levels and the sulphur compounds they are exposed to [are] probably 10 to 20 times more than here. I mean, we are breathing amazingly clean air compared to New Delhi."

There are risks to living anywhere, Sareen says.

"Should I leave my house, disrupt my life?" he asks. "Close the schools — close the preschools? And live somewhere else?" He doesn't think so.

SoCalGas says it hopes to have the leak fully stopped within the month, and will pay an additional week's rent after that for the families who did decide to relocate. After that, the utility says, residents should start moving back to the area.

But some people say they never will.