Accessibility links
A Voter's Guide To The Health Law Chatter : Shots - Health News A law as broad and complex as the Affordable Care Act invites both criticism and praise. Here's a look at some of the claims made on the presidential campaign trail.

A Voter's Guide To The Health Law Chatter

A Voter's Guide To The Health Law Chatter 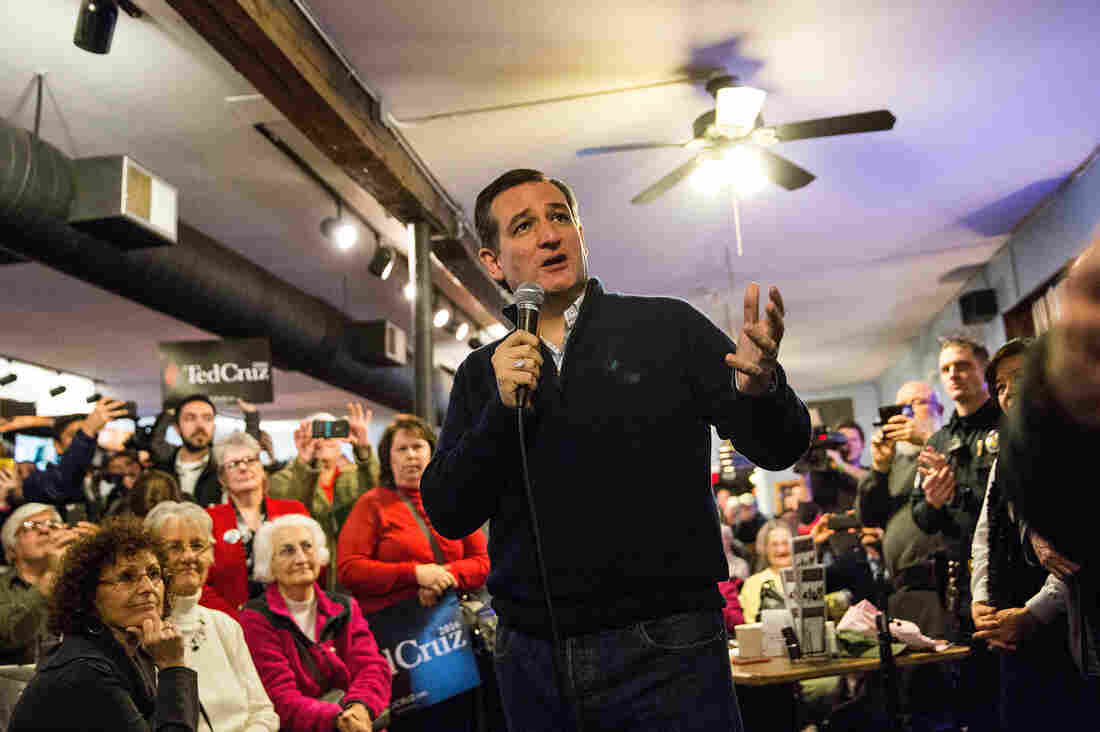 Republican presidential hopeful Ted Cruz initially claimed his private insurance had been canceled. It turned out his insurer had transferred him to a plan with a narrow network of providers. Andrew Burton/Getty Images hide caption 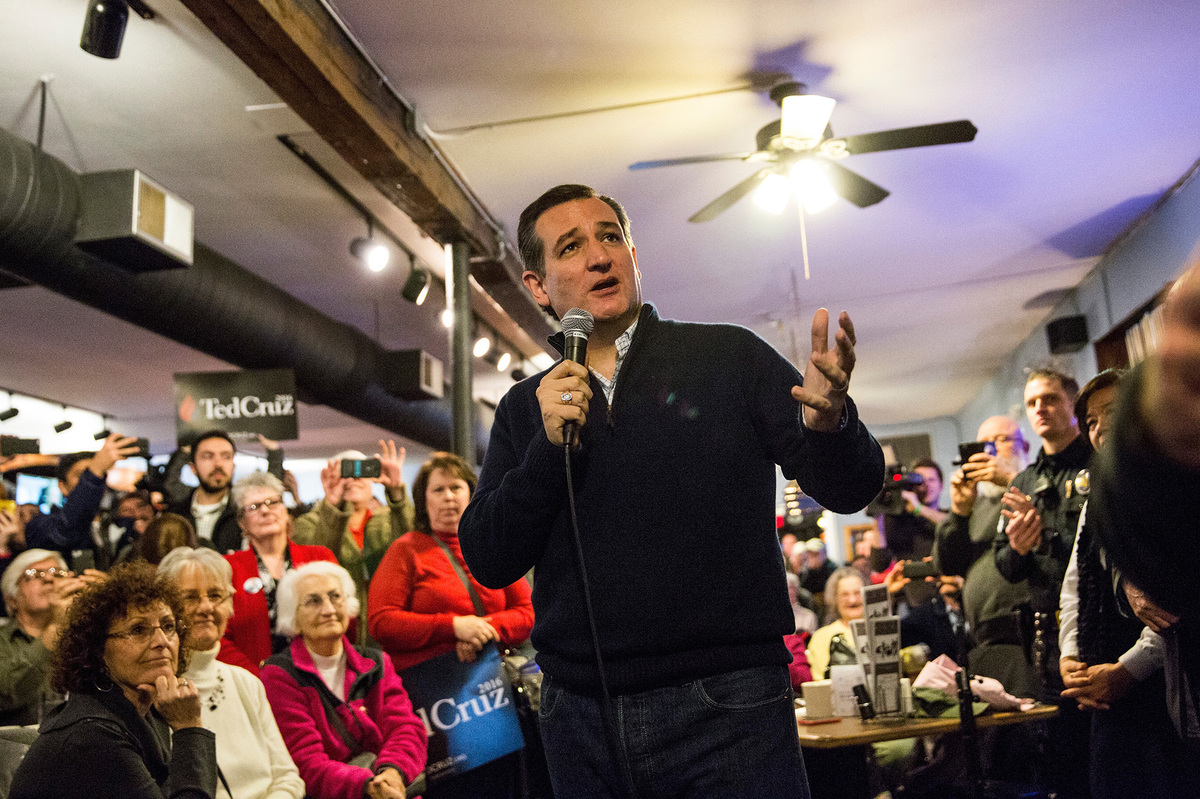 Republican presidential hopeful Ted Cruz initially claimed his private insurance had been canceled. It turned out his insurer had transferred him to a plan with a narrow network of providers.

Nearly six years after its enactment, the Affordable Care Act remains a hot issue in the presidential race — in both parties.

"Our health care is a horror show," said GOP candidate Donald Trump at the Republican debate in South Carolina in December. Texas Sen. Ted Cruz, winner of the Iowa caucuses, said at the debate in Des Moines that the health law has been "a disaster," adding it's "the biggest job-killer in our country."

Democrats largely support the law, but even they can't agree on how to fix its problems. Hillary Clinton said at the Jan. 25 town hall on CNN that she wants to "build on the ACA. Get costs down, but improve it, get to 100 percent coverage."

Clinton's rival for the nomination, Vermont Sen. Bernie Sanders, acknowledged that "the Affordable Care Act has done a lot of good things" but added that "the United States today is the only major country on Earth that doesn't guarantee health care to all people as a right." Sanders is pushing a government-run "Medicare for All" plan instead.

In some cases candidates are bending the truth. But praise and criticisms of the law can be accurate. That's because the health law is so big and sweeping that it has had effects both positive and negative.

Here is a brief guide to some things the health law has — and has not — accomplished since it was signed by President Obama in 2010.

CLAIM: The law has increased the number of people with health insurance coverage.

This is true, no matter what measure you use. The Census Bureau and polling firm Gallup both found substantial drops in the percentage of people without health insurance after the majority of the law's coverage expansions took effect in 2014.

COUNTERCLAIM: There are still millions of Americans who don't have insurance.

This is also true. Even though approximately 90 percent of Americans now have insurance, that remaining 10 percent amounts to more than 30 million people.

Millions aren't eligible for coverage under the law because they're not in the U.S. legally. An additional 3 million are in the so-called Medicaid gap, meaning they would be eligible for Medicaid under the ACA except their states opted not to accept the expansion after the Supreme Court effectively ruled the expansion optional.

Still others are eligible to purchase coverage on a health insurance exchange but either can't afford it, don't think the insurance available offers a good value, or don't know they are legally required to obtain it. An estimated 7.5 million Americans paid a fine to the IRS for failing to get covered in 2014; millions more were exempt from the requirement and didn't have coverage.

In recognition of the fact that enrollment has been smaller than expected, the Congressional Budget Office recently lowered its projections for those who will buy insurance under the law from 21 million to 13 million in 2016.

CLAIM: The ACA has fixed the dysfunctional individual insurance market.

Prior to the passage of the health law, millions of people who didn't have work-based or government coverage were shut out of buying their own insurance because they had been sick or because the coverage offered did not cover the services they needed.

The law aimed to address the problems in the individual market in several ways, including requiring insurers to sell to those with pre-existing conditions at the same price as healthier people; standardizing the benefits package; and limiting the size of deductibles. Tax credits were made available to help people afford coverage. And the law created insurance exchanges intended to help consumers compare, choose, sign up and pay for health insurance.

How well these changes succeeded in stabilizing the market isn't clear. What is clear is that more people are now insured through the market.

COUNTERCLAIM: The ACA has made the individual market worse.

All is not well in the individual market. Even with help paying premiums, many moderate-income Americans are finding that their deductibles and copayments are so high they cannot afford to use their insurance.

In other cases, individuals can get insurance they can afford to use, but it doesn't include their regular doctors and hospitals. In fact, plans that do offer coverage outside the insurer's network are becoming harder to find and more expensive.

That change affected Cruz, who initially claimed his private insurance had been canceled. In fact, his insurer had stopped offering his broad-choice plan and automatically transferred him to a narrow-network product.

CLAIM: The ACA has improved the Medicare program.

While most of the law was aimed at those without insurance, lawmakers also took the opportunity to beef up some benefits for the 55 million Americans in the Medicare program.

Medicare enrollees got new coverage for preventive services and annual checkups, and those with high prescription drug expenses got help to fill the "doughnut hole" gap left by the 2003 Medicare drug program.

Over the longer term, the law created several payment experiments intended to improve the quality of care Medicare patients receive and lower costs. These include efforts to prevent patients from going back to the hospital after they've been discharged.

COUNTERCLAIM: The ACA has not saved money for Medicare.

The rate of increase in Medicare spending has slowed since the health law was passed in 2010. But it's not clear how much of that can be attributed to the law, aside from some provisions that actually cut payments to hospitals and other health providers.

And some of the most highly anticipated projects, including accountable care organizations that are paid bonuses for keeping Medicare patients healthy and lowering spending, have not so far shown very good results.

CLAIM: The ACA has killed jobs.

One of Republicans' favorite talking points — that the health law would depress employment — has turned out not to be the case.

An analysis in 2015 by the Urban Institute found that the health law "had virtually no adverse effect on labor force participation; employment; the probability of part-time work; and hours worked per week by nonelderly adults."

While there would be fewer people in the workforce owing to the law, the Congressional Budget Office found in 2014 that "almost entirely" stems from voluntary actions by workers who could quit because they no longer depended on their jobs for insurance — now they could buy it on their own.

The White House trumpeted the fact that health spending grew at its slowest rates ever between 2010 and 2013. But health policy analysts are still engaged in a lively debate about how much of the slowdown was attributable to the recession, to the health law and to other changes in the health care system.

Meanwhile, the rate of spending has begun to accelerate again, jumping from a 2.9 percent increase in 2013 to 5.3 percent in 2014. That has occurred as millions more Americans gained access to health care through the law.

Kaiser Health News is an editorially independent news service that is part of the nonpartisan Henry J. Kaiser Family Foundation. Julie Rovner is on Twitter: @jrovner