Accessibility links
Strokes On The Rise Among Younger Adults : Shots - Health News Fewer people are having strokes now than decades ago. But that improvement seems to be mostly among the elderly. Young people are actually having more strokes, partly because of the rise in obesity. 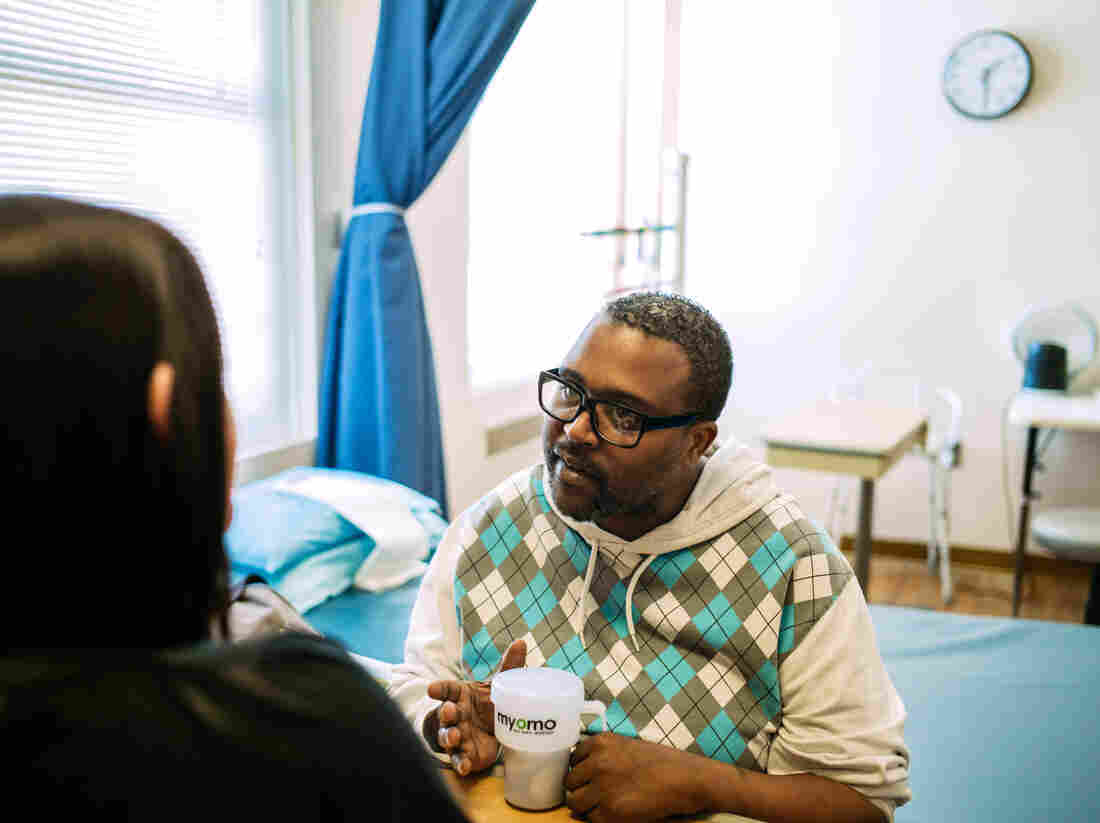 Troy Hodge was only 41 years old when a vessel in his brain burst. "You don't think of things you can't do until you can't do them," he says. Matailong Du/NPR hide caption 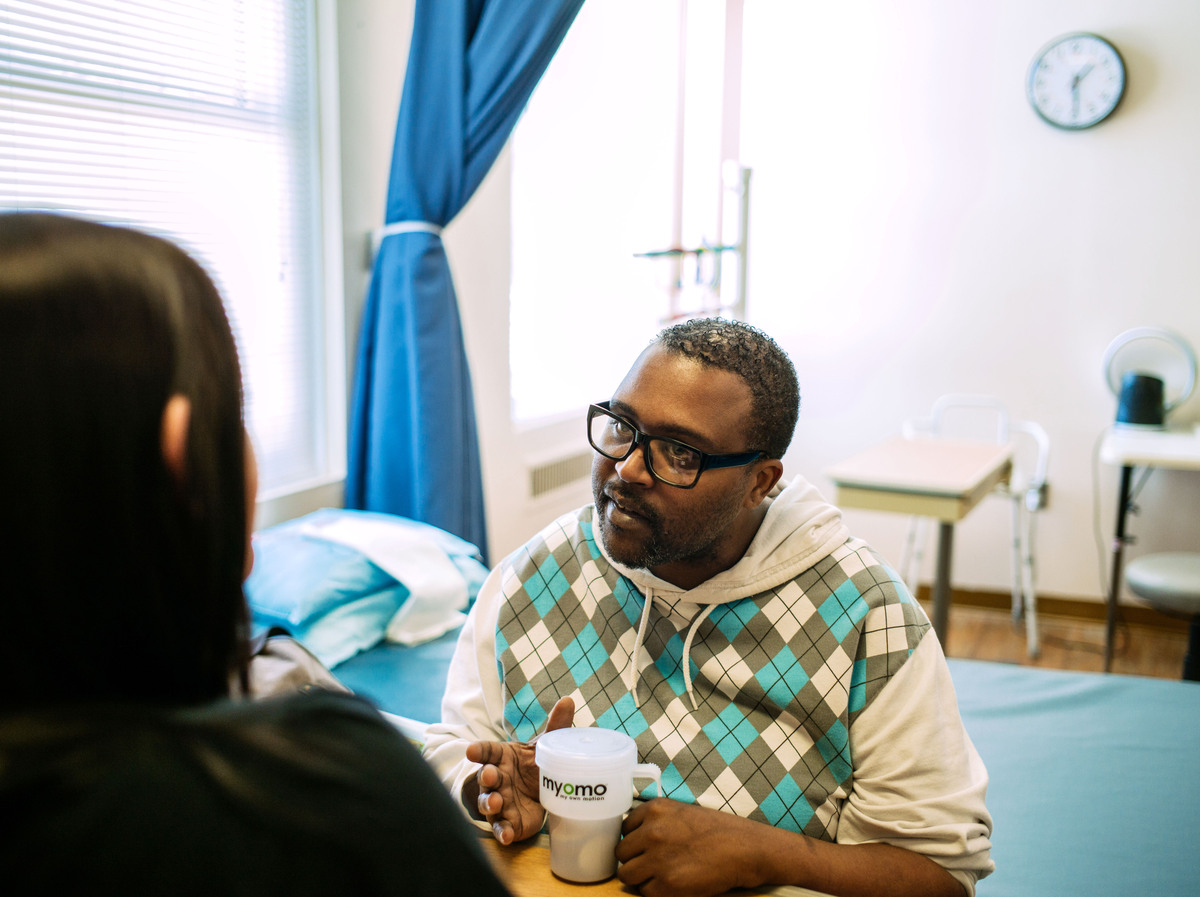 Troy Hodge was only 41 years old when a vessel in his brain burst. "You don't think of things you can't do until you can't do them," he says.

"I am what I like to call 'new stroke'," says Troy Hodge, a 43-year-old resident of Carroll County, Md. With a carefully trimmed beard and rectangular hipster glasses, Hodge looks spry. But two years ago, his brain stopped communicating for a time with the left half of his body.

He was at home getting ready for work as a food service director at a nearby nursing home. Hodge remembers entering the downstairs bathroom to take his blood pressure medications. He sat down on the bathroom floor and couldn't get up. He says he felt so hot, he actually splashed some toilet water on his face because he couldn't reach the sink.

When Hodge didn't show up for work, a colleague got worried and came over. She called 911 when she found him on the floor.

"I remember telling her not to let me die," says Hodge, "and from then on I really don't remember that much." He woke up a day or so later at a trauma center one state over, in Delaware.

"Troy experienced what we call an intracerebral hemorrhage, which basically just means bleeding within the substance of the brain," says Dr. Steven Kittner, a neurologist at the University of Maryland School of Medicine. Hodge's high blood pressure probably damaged the tiny vessels in his brain, Kittner says.

Hodge is one of many Americans having strokes at a younger age. About 10 percent of all strokes occur in people between 18 and 50 years old, and the risk factors include some that Hodge had: high blood pressure, overweight, off-kilter cholesterol, smoking and diabetes. 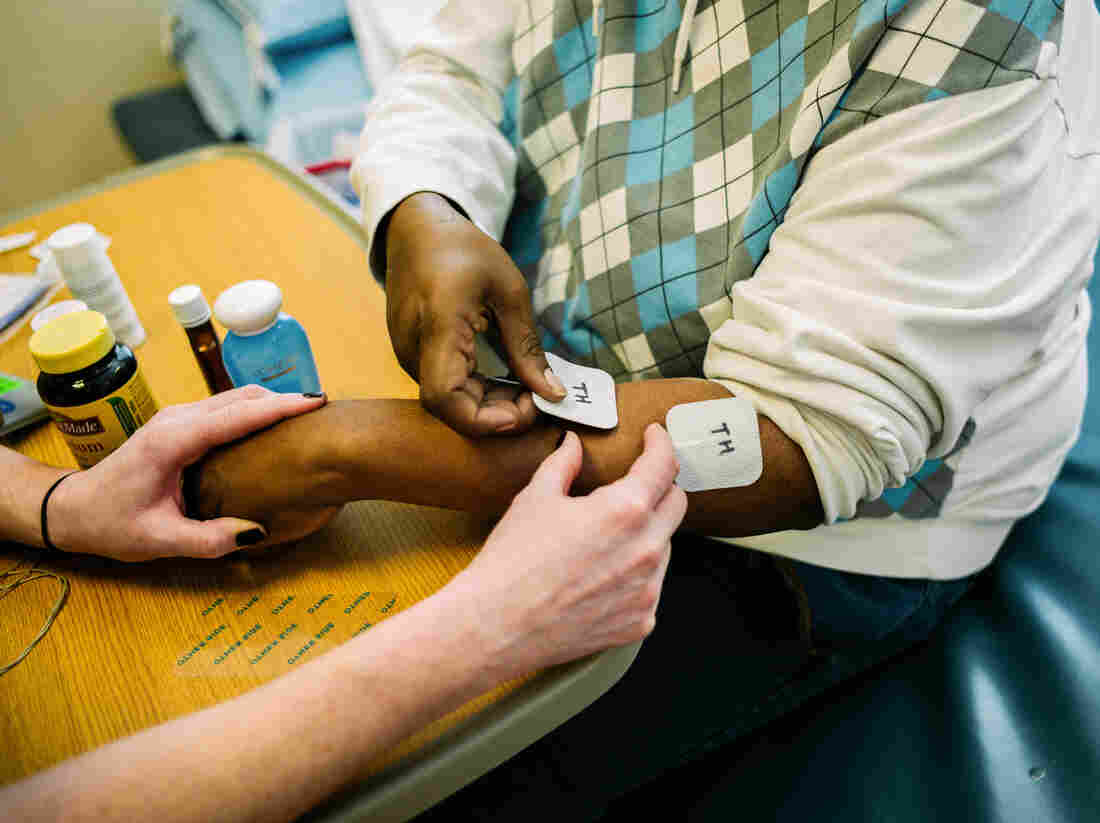 As part of his occupational therapy session, Troy Hodge gets little jolts of electricity through patches on his left arm. The stimulation is thought to help rekindle communication between the brain and nerves and muscles that were affected by his stroke. Matailong Du/NPR hide caption 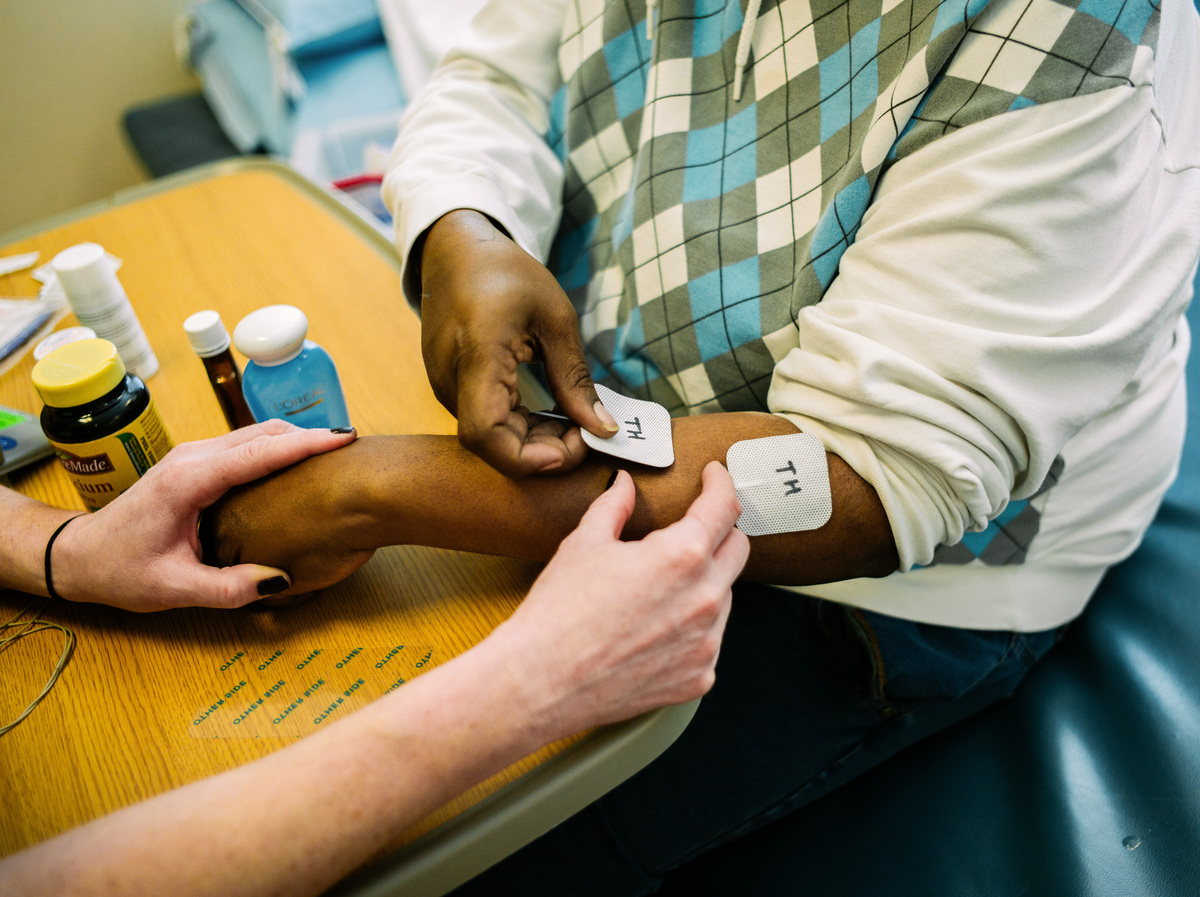 As part of his occupational therapy session, Troy Hodge gets little jolts of electricity through patches on his left arm. The stimulation is thought to help rekindle communication between the brain and nerves and muscles that were affected by his stroke.

In particular, ischemic strokes — caused by a blockage in the blood vessel, rather than a bleed — are sharply increasing among people under age 50, statistics show.

This is not to say that stroke is becoming a disease of young people.

"The majority of strokes are still happening in older individuals, says Dr. Amytis Towfighi, a vascular neurologist with the University of Southern California. "What's concerning is that the incidence and prevalence of stroke amongst younger individuals has increased, and it's increasing significantly."

The most likely underlying reason, she says, is obesity; the constellation of health issues that come with it can wear down or block a person's blood vessels.

A national survey found that between 1995 and 2008, the increased number of young people (ages 15 to 44) who were hospitalized for stroke closely followed an increase in several chronic conditions, including high blood pressure, diabetes, obesity and lipid disorders.

"People who are obese are at greater risk for high blood pressure, and high blood pressure is the leading risk factor for stroke," says Dr. Mary George, senior medical officer with the CDC's Division for Heart Disease and Stroke Prevention and an author on the national study. In 1995, about 3 percent of patients between 15 and 34 years old who had ischemic strokes were obese. By 2007, 9 percent were obese.

"One in three men in that age group had hypertension," says George. "That's very high."

Hodge is a big guy, and he says he'd had high blood pressure for a long time. Perhaps, on the day of his stroke, the extra pressure on his circulatory system just caught up with him. Like water in a bent hose, the volume of blood moving through his body overloaded a delicate passageway deep inside his brain, and the vessel burst.

It was key to his survival that Hodge's colleague found him quickly, so that he was able to get to surgeons who could drain some of the blood before the stroke caused irreversible damage. Still, in one day, Hodge became a patient at a facility just like the ones he used to work in. 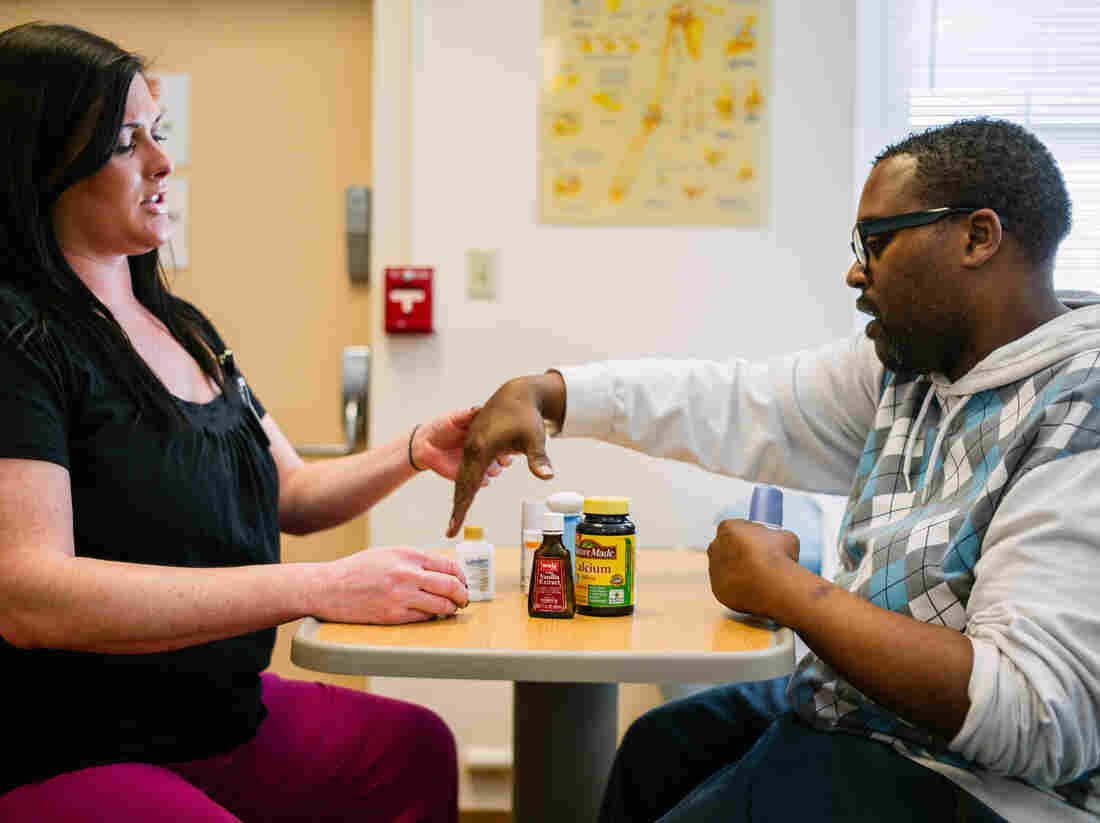 Occupational therapist Lydia Bongiorni works with Troy Hodge on grasping and lifting objects at a rehabilitation center in Gwynn Oak, Md. "You basically have to start over again," Hodge says. "You retrain your brain to use your limbs." Matailong Du/NPR hide caption 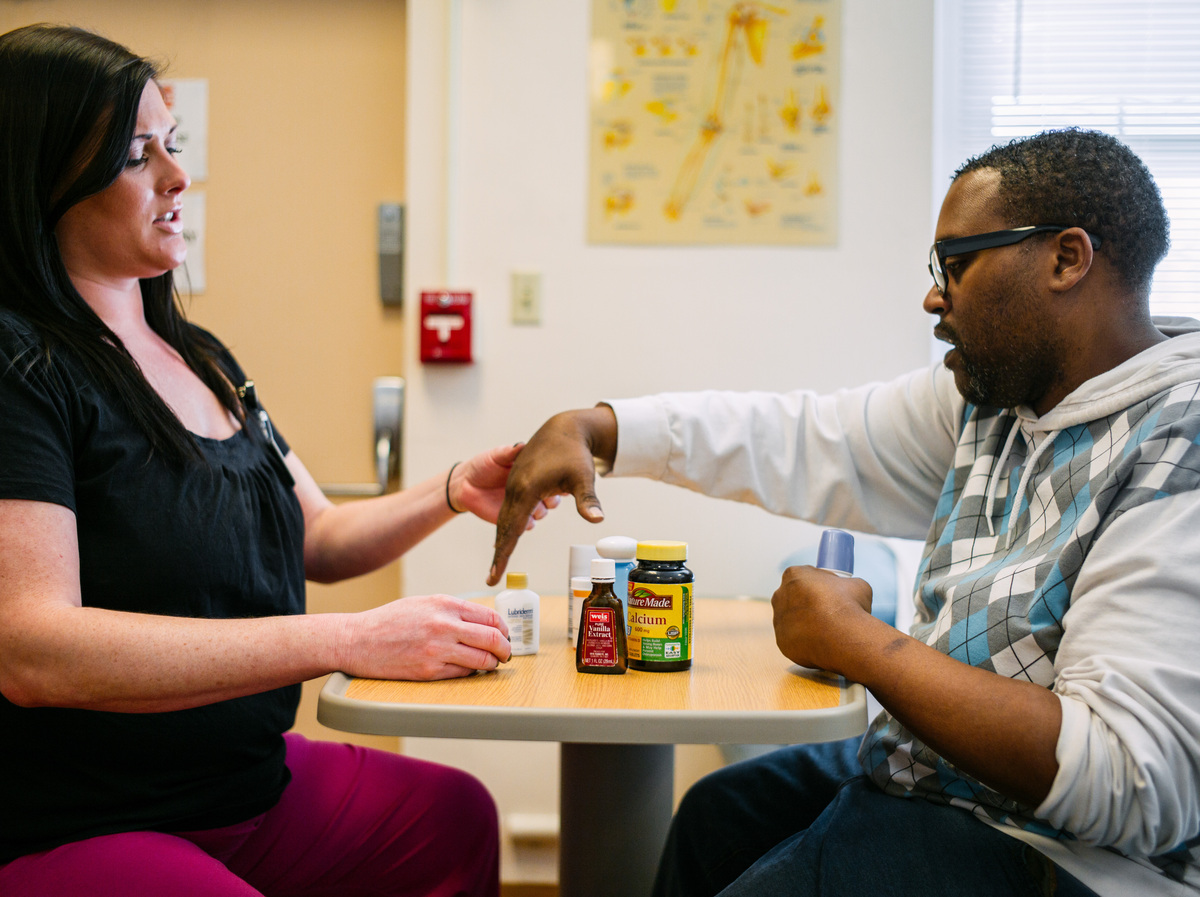 Occupational therapist Lydia Bongiorni works with Troy Hodge on grasping and lifting objects at a rehabilitation center in Gwynn Oak, Md. "You basically have to start over again," Hodge says. "You retrain your brain to use your limbs."

He couldn't walk or do anything that involved both hands. He started making lists, he says, because his short-term memory took a hit. And even in the bitter cold, he'll now head out the door with just a hoodie on.

"I'm not much of a coat wearer anymore because it's just too hard putting it on," Hodge explains.

With only half his body under control, he says, something as simple as getting dressed, cutting an onion or stepping off a curb suddenly became a huge task. Putting on socks, he says, is "an ordeal. It's like an Oprah show."

Hodge ended up living in a rehab facility for a year, relearning in his 40s how to do things that he'd done almost every day of his life.

Towfighi says a lot of her younger patients have similar experiences. She oversees neurological care for the Los Angeles County Department of Health Services, where the average age of stroke patients is 56. Even though young people tend to recover their abilities better, they can also have a tough time with recovery.

Hodge didn't get depressed, but he did have to make some tough adjustments. He told his 18-year-old daughter he wouldn't be able to pay for her college or her car, and that she'd have to be on her own for a bit because he couldn't help out the way he used to.

"It was a long year, and there were times when I would just cry and not stop crying. But it passed," says Hodge.

Now, he has a one-story apartment and works part time at an exercise facility for the disabled. He's working on his blood pressure and trying to cut out cigarettes. Once a week, he goes to occupational therapy to work on everyday skills. To help get through it, he named his problem limbs. His left leg is Eddie. His left arm is Douglas. Hodge's cane is named Genevieve, after his mom.

"Eddie has done very well," Hodge says. "I think he will continue to do well. Douglas? I talk to Douglas because I'm not so sure about him. He just kind of does his own thing."

Giving one's troubled limbs a nickname or pep talk isn't unusual, says Lydia Bongiorni, an occupational therapist who worked with Hodge when he first entered rehab. "I've had quite a few patients do that," she says. "It shows a sense of humor. That's good."

At an outpatient neurorehabilitation clinic at the University of Maryland, Bongiorni and Hodge spend a lot of time working with Douglas — Hodge's notoriously uncooperative left arm and hand. It's stuck in a stiff curl.

"Troy had a stroke a couple years ago, and people used to think you would never get movement back," says Bongiorni. But Hodge's muscles are fine, she explains — it's just the messaging system from his brain to his muscles that needs repair. "I tell people that the brain wants to reconnect with that arm again, and we have to tap into different pathways of doing that."

With a device the size of a sandwich, Bongiorni delivers a jolt of electricity through patches stuck on Hodge's arm. It takes a lot of tiny muscles working together to move a hand, and the electrical stimulation is thought to send signals that wake up the brain to the communication it needs to do with nerves and muscles.

Hodge's face strains as he grasps a deodorant stick and brings it haltingly up to his armpit. Bongiorni is trying to get him to use his left hand as a tool, rather than like a stump. They practice washing dishes, walking with a weight in that hand, and bringing a cup up to his mouth. Next on the list of Hodge's goals: taking out the trash.

Regaining his motion is not going to be easy. He's going to have to keep practicing these things every day on his own, like a musician mastering an instrument. But, he says, "I'm only 43, so I have time to do that."