Accessibility links
Sanders' Health Plan Renews Debate On Universal Coverage : Shots - Health News Left-leaning economists and Democratic analysts are sparring over Sanders' proposal of health care for all, paid for by the government. Some who like his aspiration say the numbers don't add up. 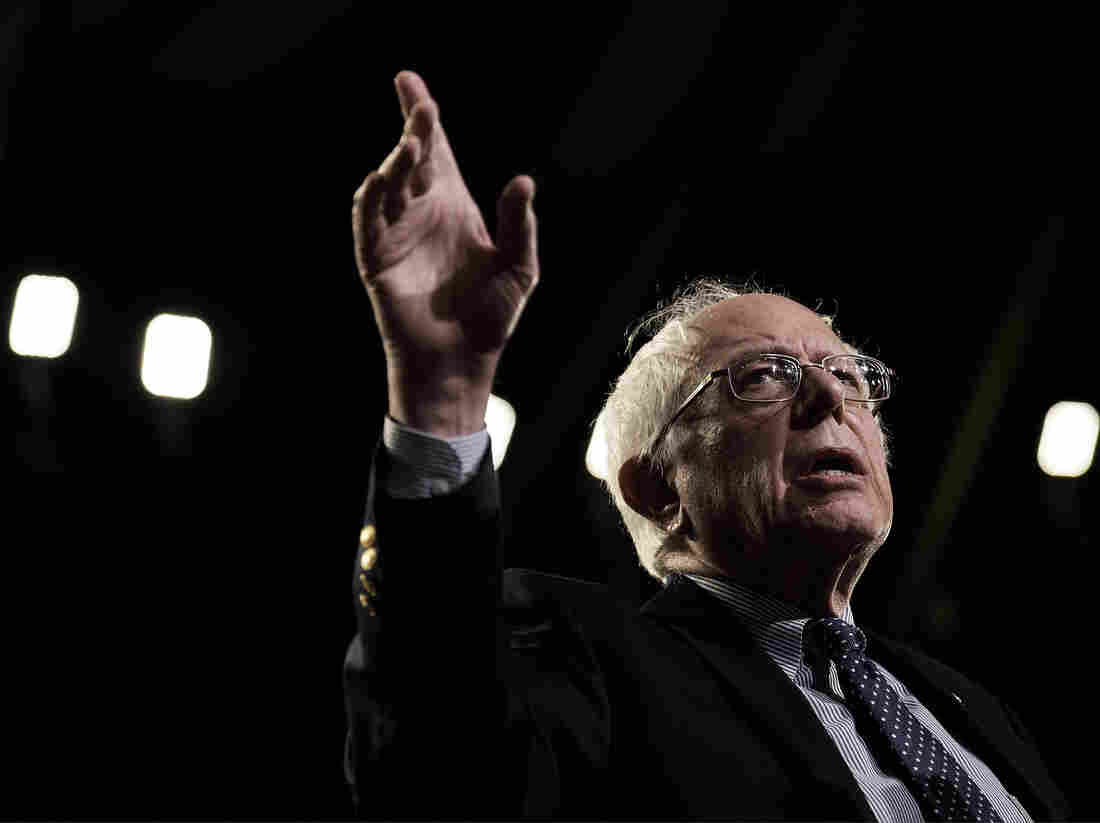 Sen. Bernie Sanders, a 2016 Democratic presidential candidate, has proposed a health care policy he calls "Medicare for All." But some left-leaning economists say the plan doesn't pencil out. Bloomberg/Bloomberg via Getty Images hide caption 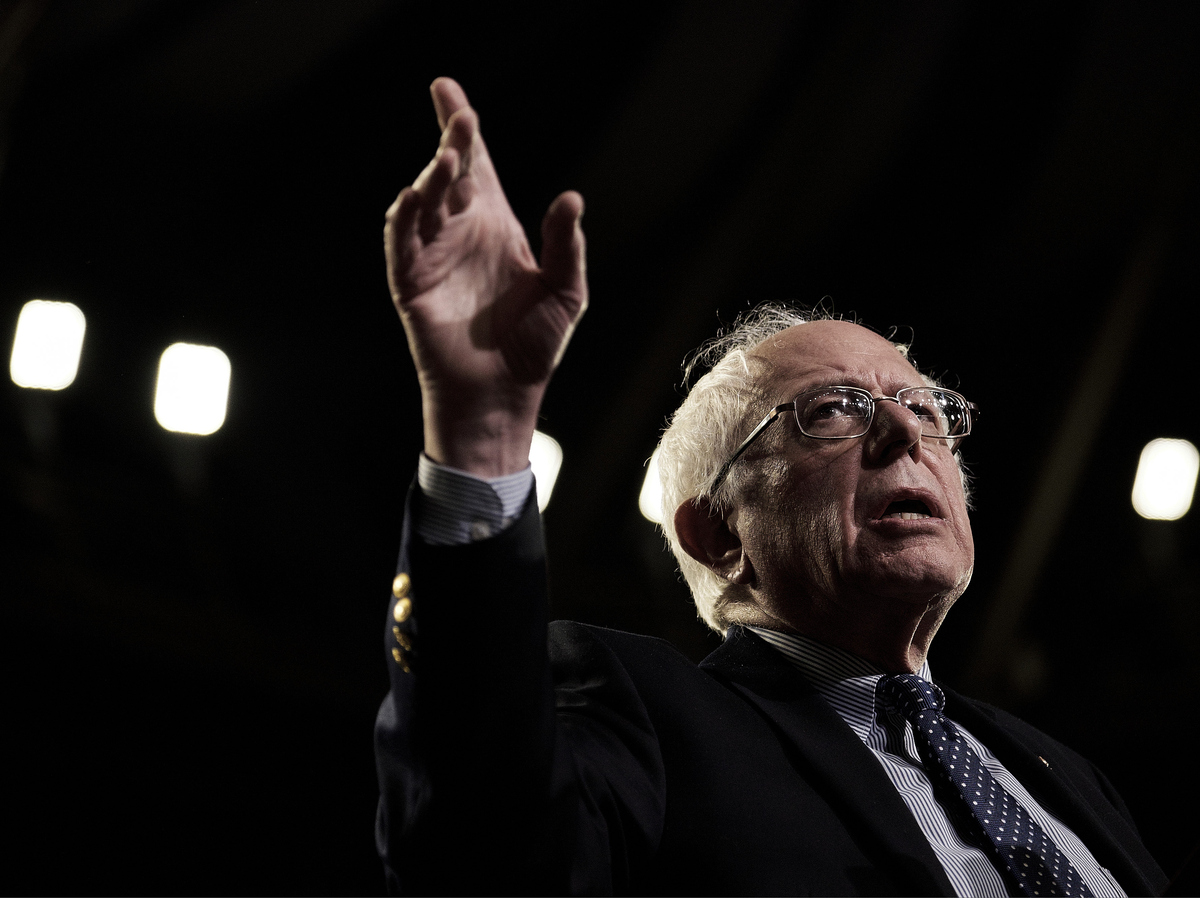 Sen. Bernie Sanders, a 2016 Democratic presidential candidate, has proposed a health care policy he calls "Medicare for All." But some left-leaning economists say the plan doesn't pencil out.

When Vermont Sen. Bernie Sanders stumps for health care for everyone, it always gets huge applause.

"I believe that the U.S. should do what every other major country on Earth is doing," he told a crowd at Eastern Michigan University on Feb. 15. "And that is, guarantee health care to all people as a right."

The voters love it.

But the proposal has ignited a lively debate among left-leaning economists and policy analysts, and some are challenging his numbers.

"I like the goal of the plan," Jared Bernstein, formerly a top economic adviser to Vice President Biden, tells Shots. "I'm not sure the numbers add up, but the aspirations add up."

Though Sanders calls his plan Medicare for All, the system he proposes would be far more generous than the current health care program for senior citizens. It would cover more, and beneficiaries would pay far less out of pocket.

Sanders says he can pay for it — by raising people's federal income tax by 2.2 percent and charging employers 6.2 percent of their payroll.

The typical family would pay $466 more in premiums and save more than $5,000 in health care costs each year, according to the outline of the plan on his website.

To back it up, he cites an analysis titled "United States Can Afford Single Payer Health Care Program" from Gerald Friedman, an economics professor at the University of Massachusetts.

Longtime backers of single-payer health plans are circling Sanders to promote his proposal. His campaign office is circulating a statement signed by more than 130 economists, physicians and university professors endorsing the plan.

"The medical insurance industry is really a group of middlemen — there's no need to have middlemen between paying for care and actually receiving care," says Dr. Steffie Woolhandler, an internist and professor at the City University of New York's school of public health at Hunter College. Woolhandler signed the letter and has written several editorials defending Sanders' ideas.

She says such systems operate around the world, and many countries spend as much as 40 percent less per capita than the U.S. spends on health care.

Many liberal economists and policymakers, however, disagree with the practicality of the plan, and are challenging Sanders' math regarding the cost and savings.

"The government would make public something like 8 to 9 percent of the economy that's currently private," says Bernstein, who is now a fellow at the nonpartisan Center on Budget and Policy Priorities. "That would be hugely disruptive to those on that private side."

And Kenneth Thorpe, chairman of the health policy and management program at Emory University's school of public health, estimates that Sanders' plan will cost twice as much as the senator claims.

"A single payer plan would create enormous financial winners and losers among households and businesses," Thorpe writes in a recent analysis.

"As much as we wish it were so, no credible economic research supports economic impacts of these magnitudes," wrote the economists — all former chairs of the White House Council of Economic Advisers.

One of the letter's authors, Austan Goolsbee, of the University of Chicago Booth School of Business, was chairman of President Obama's council of economic advisers. He says Sanders overestimates the savings from the single-payer program and underestimates the costs and necessary tax increases.

"If you promise, 'I'm going to take you to the finest French restaurant and give you Chateaubriand and it's only going to cost you $2.79,' it's right to be a little skeptical and say, 'How do I know you're not going to just give me a Wendy's spicy chicken wrap and call it a day?' " Goolsbee tells Shots.

Goolsbee and other skeptics admit they don't relish opening another gigantic fight over health care just a few years after Obama's Affordable Care Act was signed into law.

"I was there when we were doing Obamacare, and that was a really hard job," he says. "The thought of re-fighting that battle? That does make me nervous."

The Sanders campaign has dismissed such critics as "establishment voices" that just don't want to disrupt the status quo.