Accessibility links
Marijuana Tourists In Colorado Are More Likely To Need Medical Help : Shots - Health News Tourists who indulge in legal marijuana in Colorado are more likely to end up in the emergency room with cannabis-related problems than are state residents, a study finds. Talk about a bad trip. 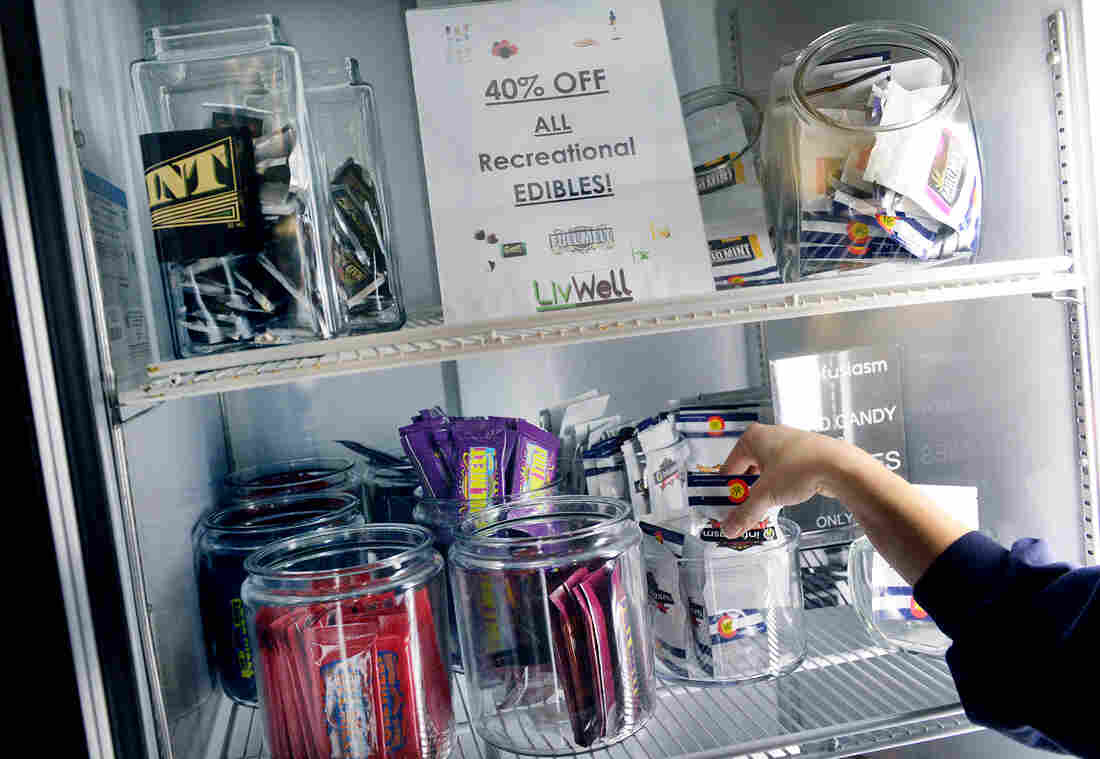 A budtender prepares an edible sale for a customer at LivWell Broadway in Denver. Craig F. Walker/Denver Post via Getty Images hide caption 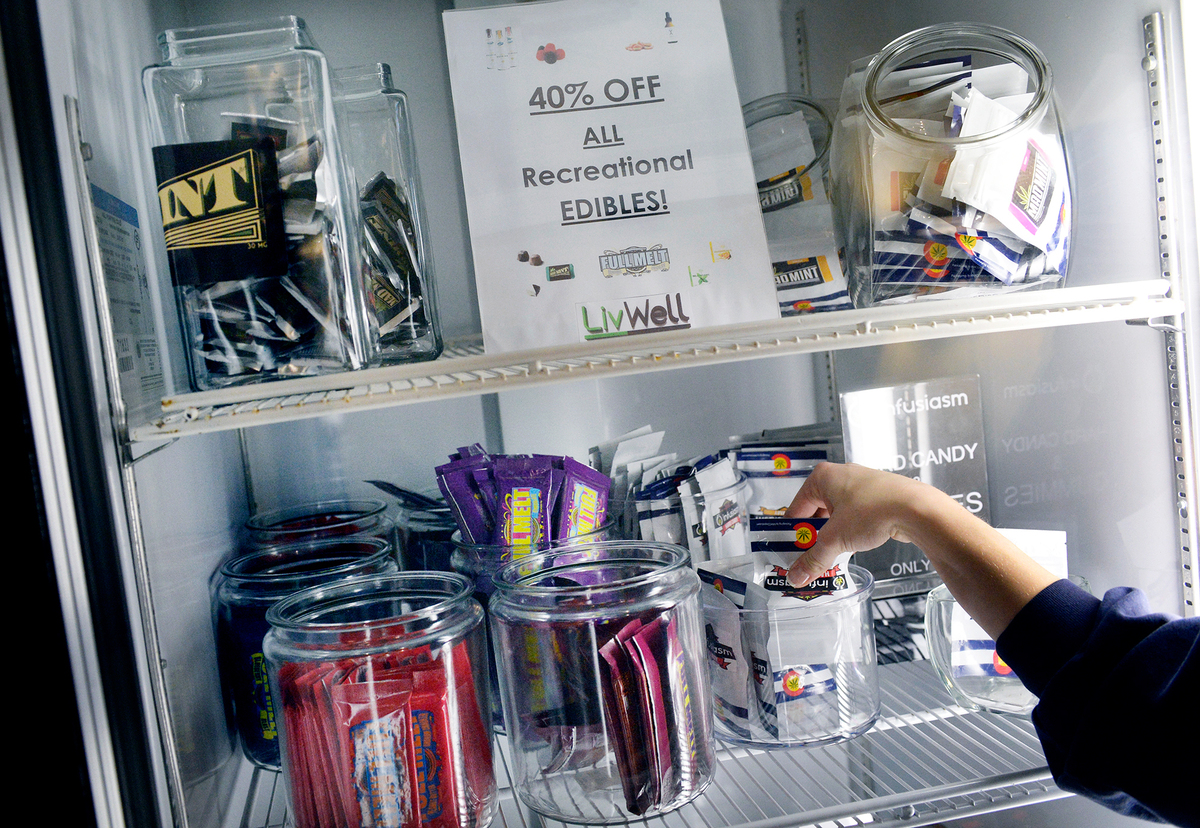 A budtender prepares an edible sale for a customer at LivWell Broadway in Denver.

A lot of visitors to Colorado figure they might give the state's good ganja a try, but they might not be prepared for the effects. When it comes to bad weed trips, out-of-staters have been doing much worse than Colorado residents and are going to the ER more often since recreational sales of marijuana began in 2014.

The number of out-of-state residents who ended up in the emergency room for cannabis-related reasons nearly doubled from 2012 to 2014, according to an analysis of emergency department visits in 100 Colorado hospitals. By contrast, the number of Colorado residents visiting emergency rooms for cannabis increased about 40 percent in those two years, according to the study published in the New England Journal of Medicine on Wednesday. 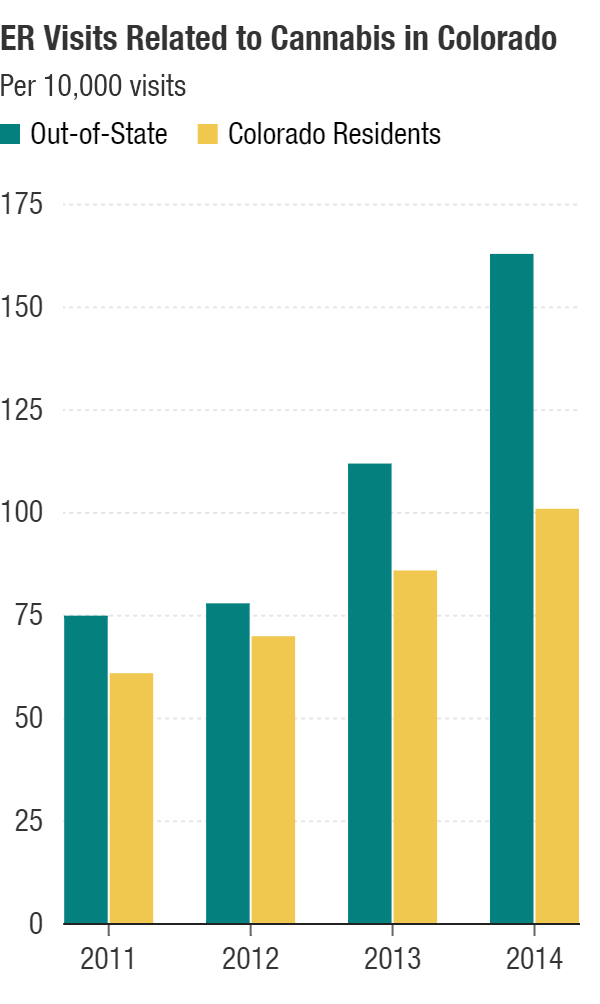 The rate of out-of-state marijuana patients in the ER for cannabis-related problems has been increasing more rapidly than the rate for Colorado residents. Colorado Department of Public Health and Environment hide caption

There are marijuana-specific tours, like those run by My 420 Tours, but many of these visitors seem to be in Colorado for other reasons, says lead author Dr. Howard Kim, an emergency medicine physician and a postdoc at Northwestern University. "I remember some business travelers who were in Denver on business, and after the meeting ended, they decided to try some marijuana edibles. Then they ended up cutting to the ER."

Kim was finishing his residency in Colorado when he did the study. A lot of the people ending up in the ER where Kim was finishing his residency had classic signs of marijuana intoxication. "People can be anxious or agitated or even have brief psychotic episodes like hallucinations and delusions," he says. "Patients can have a very fast heart rate or gastrointestinal problems like vomiting."

It's not clear why Colorado residents are doing better than the visitors, but Kim thinks it probably has to do with better understanding of marijuana and its side effects. "Right now, I think it's just an awareness gap," he says. "The Colorado Department of Public Health and Environment has done a great job. But it's not as easy to educate the entire population of potential visitors to Colorado."

Adam Curtis, who owns a cannabis dispensary called The Giving Tree of Denver, says, "All my employees have a copy of the Good To Know." These are pamphlets and note cards that the Colorado Department of Health and Environment distributes to marijuana retailers as part of a state public health education campaign.

He thinks that sellers have been doing a good job of educating the customers, and the three retailers Shots contacted, including The Giving Tree of Denver, all said they provide literature from the department of health including the Good To Know materials.

Curtis advises first-time recreational users to take half the 10 milligram recommended dosage of THC. He speculates that people ending up in the ER are going above that dosage against the recommendations on packaging or by marijuana sellers.

Part of the trouble is that some people consuming marijuana edibles might not realize it takes some time to get high. "They don't feel anything. Then they take another one, and when the effect finally kicks in — now they have the effect of multiple products," Kim says. It may also be that marijuana has become more potent and some users may not realize that. Future bud tourists should be getting more help. In the past year, Colorado health officials have been establishing responsible vendor programs that train "budtenders" or cannabis sellers to give reliable information about dosing and side effects.