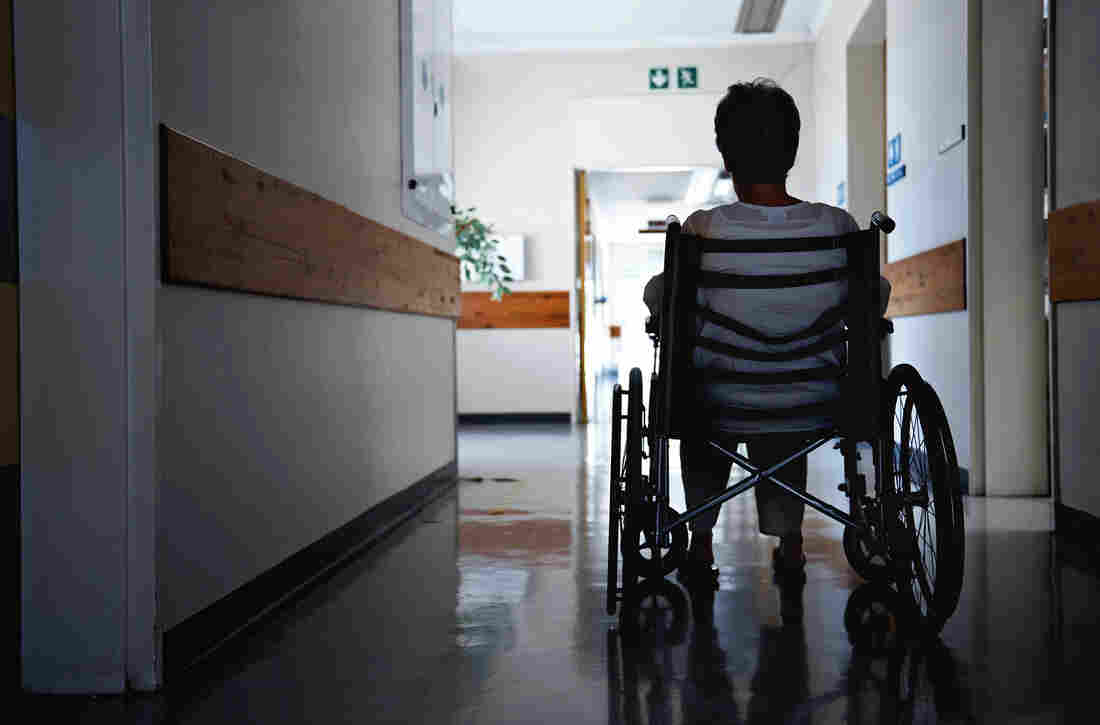 Each year, between 8,000 and 9,000 people nationwide complain to the government about nursing home evictions, according to federal data. That makes evictions the leading category of all nursing home complaints. shapecharge/Getty Images hide caption 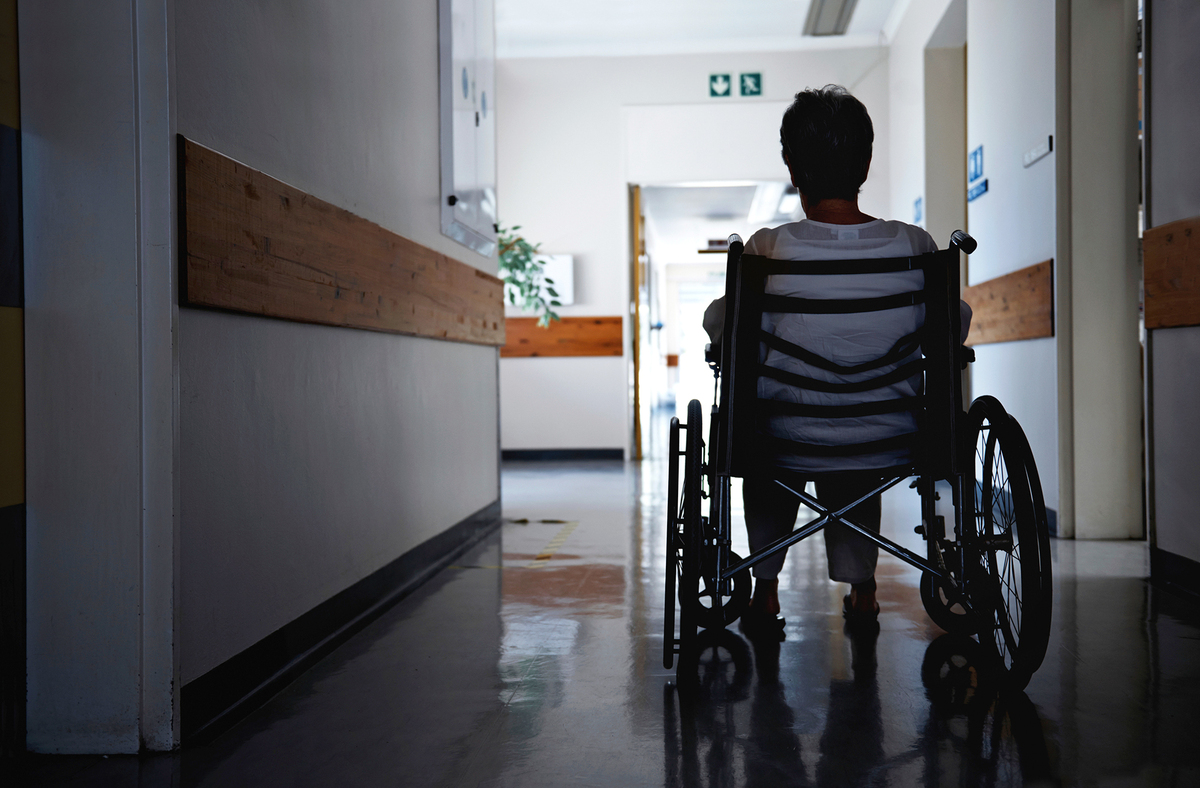 Each year, between 8,000 and 9,000 people nationwide complain to the government about nursing home evictions, according to federal data. That makes evictions the leading category of all nursing home complaints.

What if you had to go to the hospital, and when it came time to return home, your landlord said you couldn't move back in? Across the country, thousands of nursing home residents face that situation every year. In most cases, it's a violation of federal regulations. But those rules are rarely enforced by the states. So, in California, some nursing home residents are suing the state, hoping to force it to take action.

One of the plaintiffs is Bruce Anderson. Currently, he lives in a hospital room at Sutter Medical Center in Sacramento. He's been there since May 28, 2015. That's when his former nursing home sent him to be treated for pneumonia. When he was cured, the nursing home refused to readmit him. The hospital hasn't yet found him another nursing home to go to. So the hospital room has been his home for 260 days. The cost to Medicaid to keep him there is about 2.5 times what his nursing home cost.

Bruce Anderson has a severe brain injury. It happened 11 years ago, when he had a heart attack and went without oxygen for several minutes. He was just 55 years old, and has lived in nursing homes ever since.

When his daughter Sara Anderson comes to visit, she asks what he did all day. He replies in a gravelly voice: "Nothing."

At the nursing home, Sara explains, there were activities for her dad. Bingo was a favorite. And the family could take him on outings. But in the hospital, Anderson can't simply come and go as he pleases, so he has just been sitting in his bed for the past nine months.

He has good days and bad days, says his sister, Sonja Bentley, who visits along with Sara. This is one of the good days, Sonja says.

Sara agrees: "He knew my name." 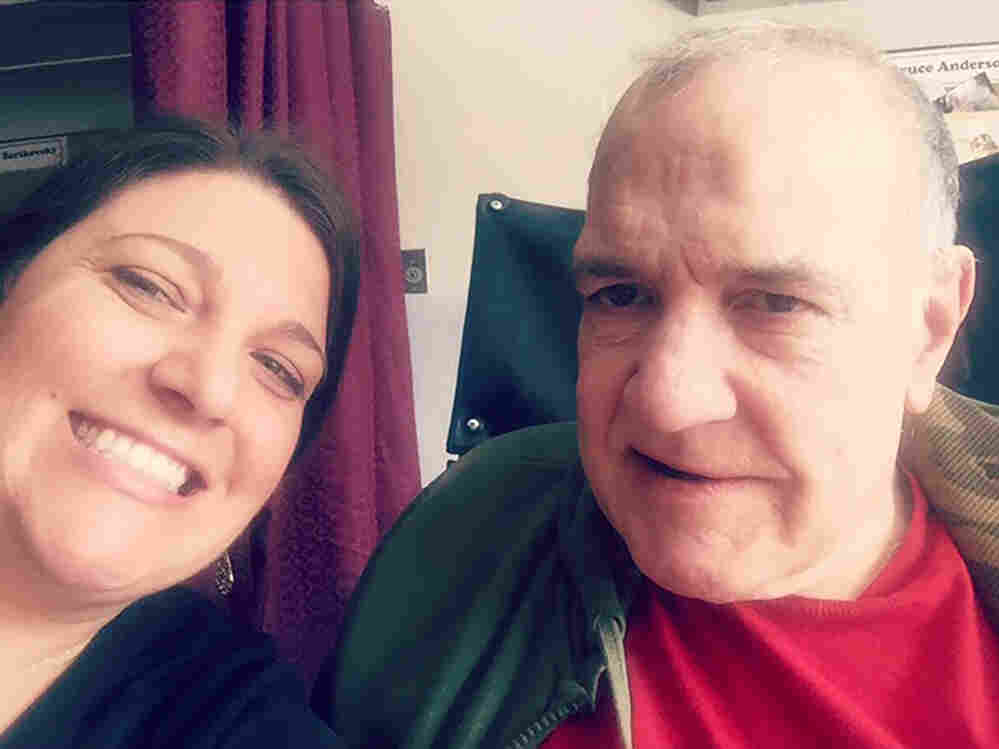 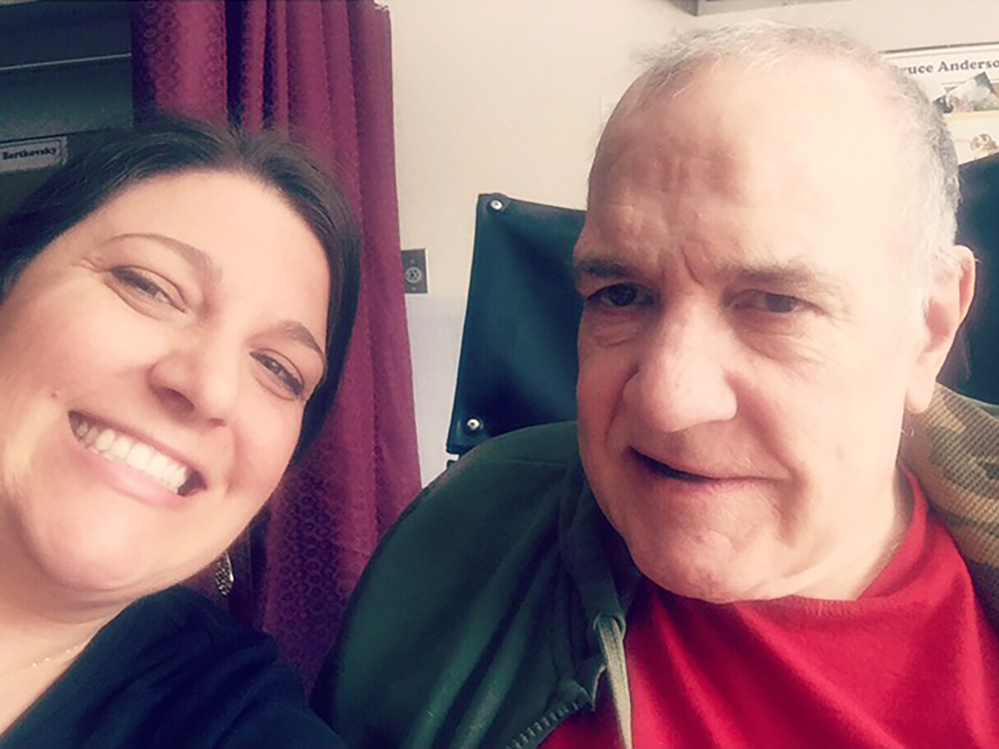 Sara Anderson and her father, Bruce Anderson, in 2015.

And that's rare, since Bruce Anderson usually thinks he's still in his 30s. Back then, Sara was only a baby. When she and Sonja visit now, they reminisce with him about his glory days, when he was a hunter, a fisherman and a well-known prankster in his small Central Valley town. Everybody remembers him, says Sara.

"Every single one of them goes, 'Oh, Bruce! He tried to drive a jeep up a tree once.' Or they all have some story about him," Sara says. "He was a legend."

Anderson is still a hell-raiser, but not in a good way, according to his former nursing home, Norwood Pines Alzheimer's Care Center. The home's legal representatives wouldn't comment. But in a recent court document they say that Anderson was combative, a danger to the staff and other residents. That would have been a legal reason to discharge him. Yet Norwood Pines never tried to do that in the nearly four years Anderson lived there.

So Sara Anderson was shocked when Norwood Pines wouldn't take him back. She appealed to the California Department of Health Care Services, which oversees Medicaid. The department held a hearing, and she won. Norwood Pines was ordered to readmit her father.

That's no surprise to Tony Chicotel, a staff attorney with California Advocates for Nursing Home Reform. 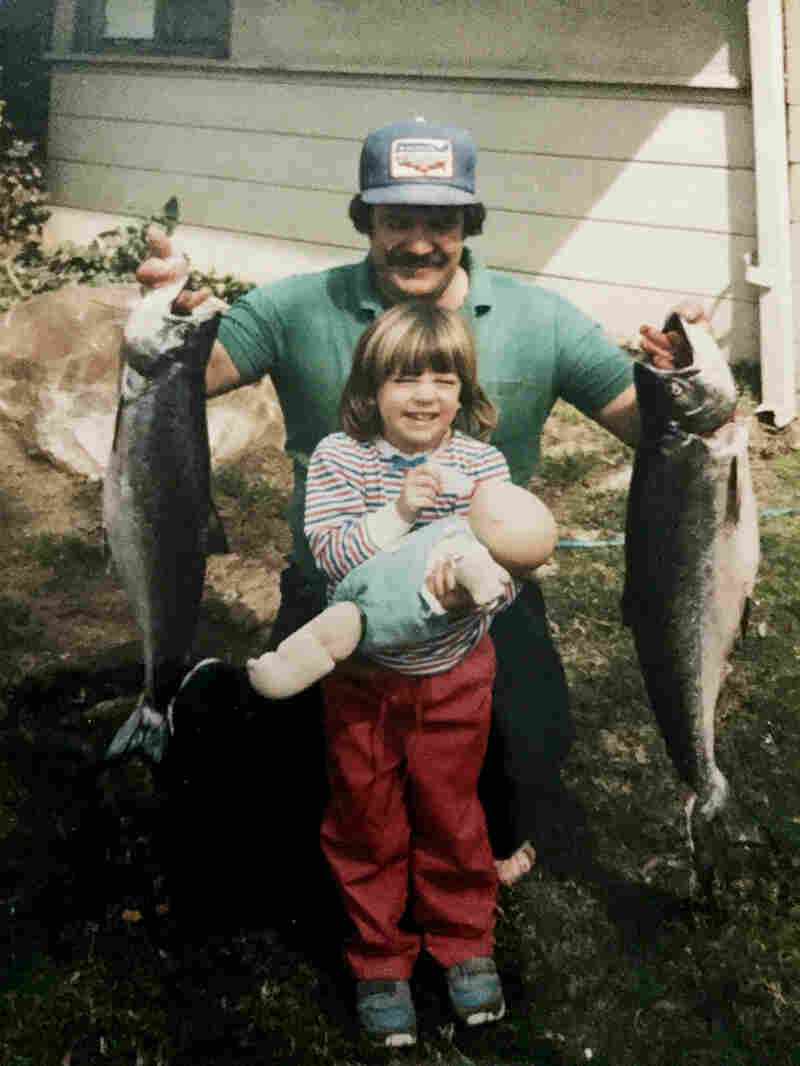 Sara and her father around 1985. Courtesy of Sara Anderson hide caption 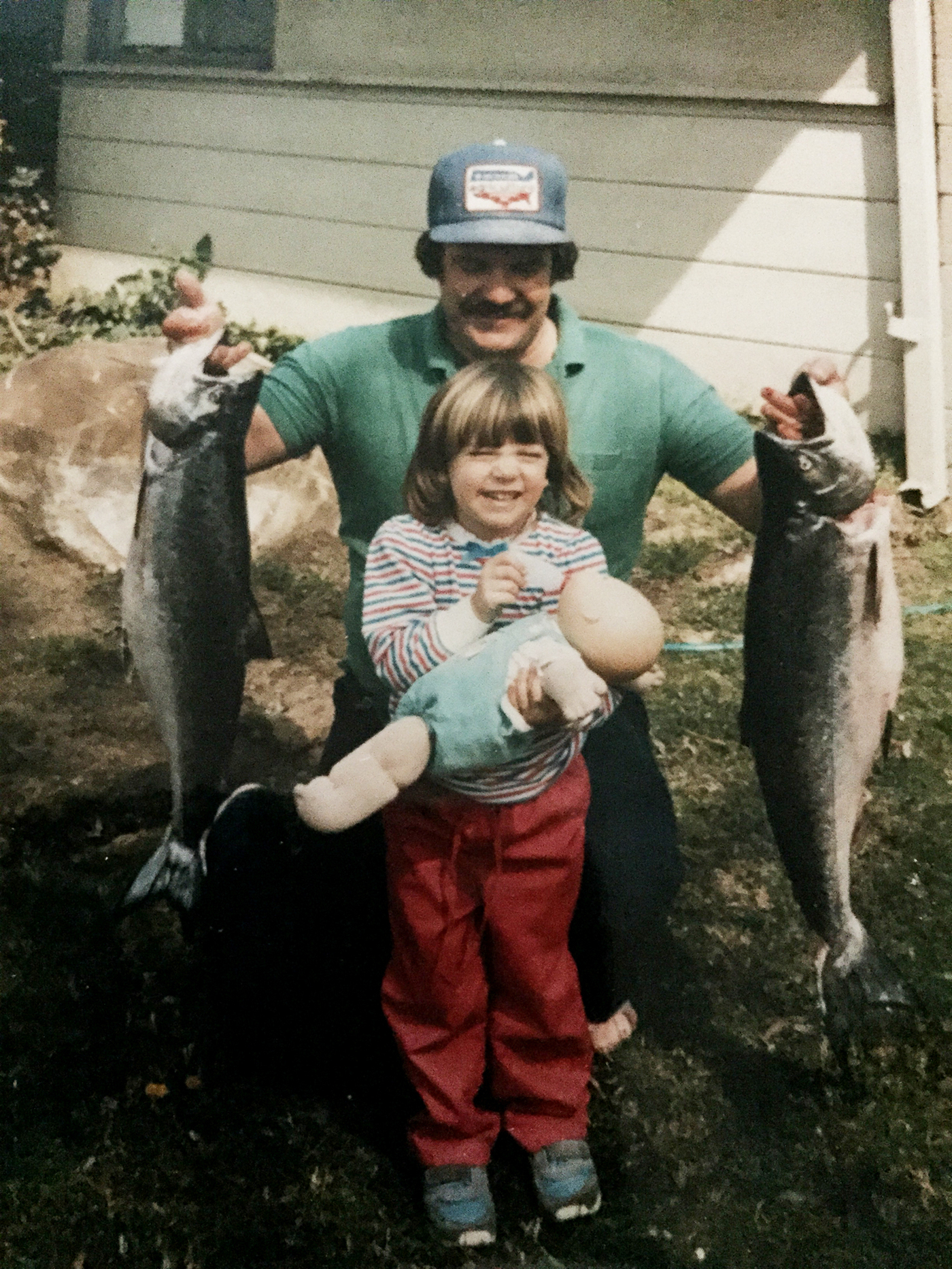 "We have lots of cases where the state has found that it's appropriate for the residents to return, but then they don't do anything afterward," says Chicotel.

That's why his organization has joined with Bruce Anderson and two other nursing home residents in suing the state of California. They want a federal judge to make the state enforce its own rulings.

One reason that doesn't happen, says Chicotel, is that the department in charge of the appeal hearings for such evictions, the Department of Health Care Services, has nothing to do with disciplining nursing homes. That's the job of the Department of Public Health.

"It's easy to describe this situation as a Catch-22," says Chicotel. "Each agency does its own thing, and they don't work together very well, and the residents fall through the hole. But at this point I think [the problem] is indifference."

Chicotel says the residents most likely to be refused readmission fit a particular type. First, they're all on Medicaid, which pays nursing homes less than they get from Medicare or private insurance. Second, he says, these are patients who are behaviorally difficult to manage — for example, "residents with mental health issues or significantly advanced dementia, or maybe traumatic brain injury." They're undesirable, says Chicotel, "because they might take a disproportionate amount of labor time."

In other words, they're expensive to care for. Bruce Anderson, for example, requires someone to watch over him 24/7.

This is not just a California issue. Nationwide, between 8,000 and 9,000 people complain to the government about nursing home evictions every year. It's the leading category of all nursing home complaints, according to the federal Administration for Community Living.

Robyn Grant thinks the problem is even larger than reported. Grant would know: She's the public policy director for the nonprofit National Consumer Voice for Quality Long-Term Care, so she hears about many nursing home evictions around the country like the ones in California.

"A lot of individuals, residents and their families, if they're told, 'You have to find another home,' just accept what the people in authority tell them and don't think they have any choices," Grant says. "They may not know that they have rights to challenge that eviction."

California officials wouldn't comment because of the lawsuit. But in their motion to dismiss it, they argue that nursing home residents already have plenty of options for defending their rights. Deborah Pacyna agrees. She's the director of public affairs for the California Association of Health Facilities, which represents nursing homes.

Nursing home residents can complain to the Department of Public Health, says Pacyna.

"The department can then investigate," she says. "They can impose daily fines, force the facility to put in a plan of correction. So, in our view, there are plenty of regulations on the books."

But California's Department of Public Health rarely uses those rules. State records show that, on average, just 11 nursing homes are fined each year for wrongly discharging a resident. And the average fine is only around $2,000.

Meanwhile, California taxpayers have paid well over $100,000 to keep Bruce Anderson in a hospital room that he tells his sister he can't wait to leave.

Though when that might be — and where he'll go — no one in the family knows for sure.