Accessibility links
Puerto Rico Races To Stop Zika's Mosquitoes Before Rains Begin : Shots - Health News The Aedes aegypti mosquito is an old foe, spreading yellow fever and dengue on the islands long before Zika gained a foothold. How do you stop an insect that can breed in a teaspoonful of stale water? 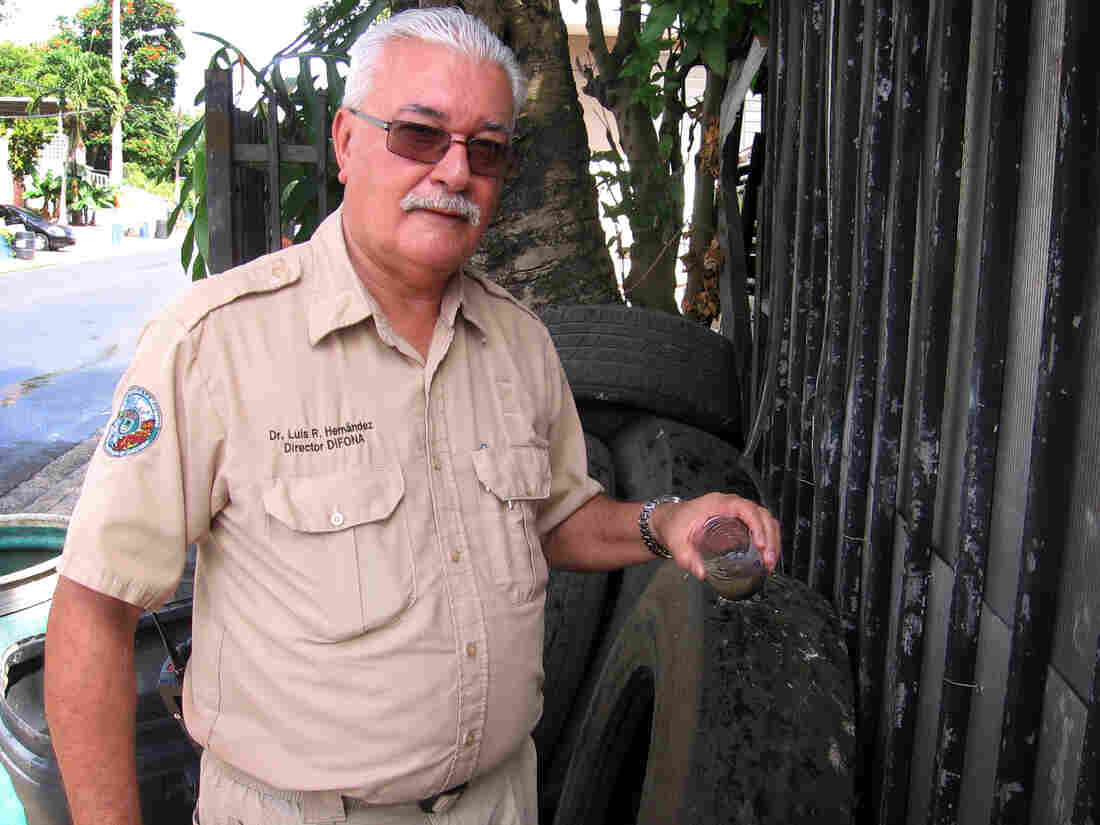 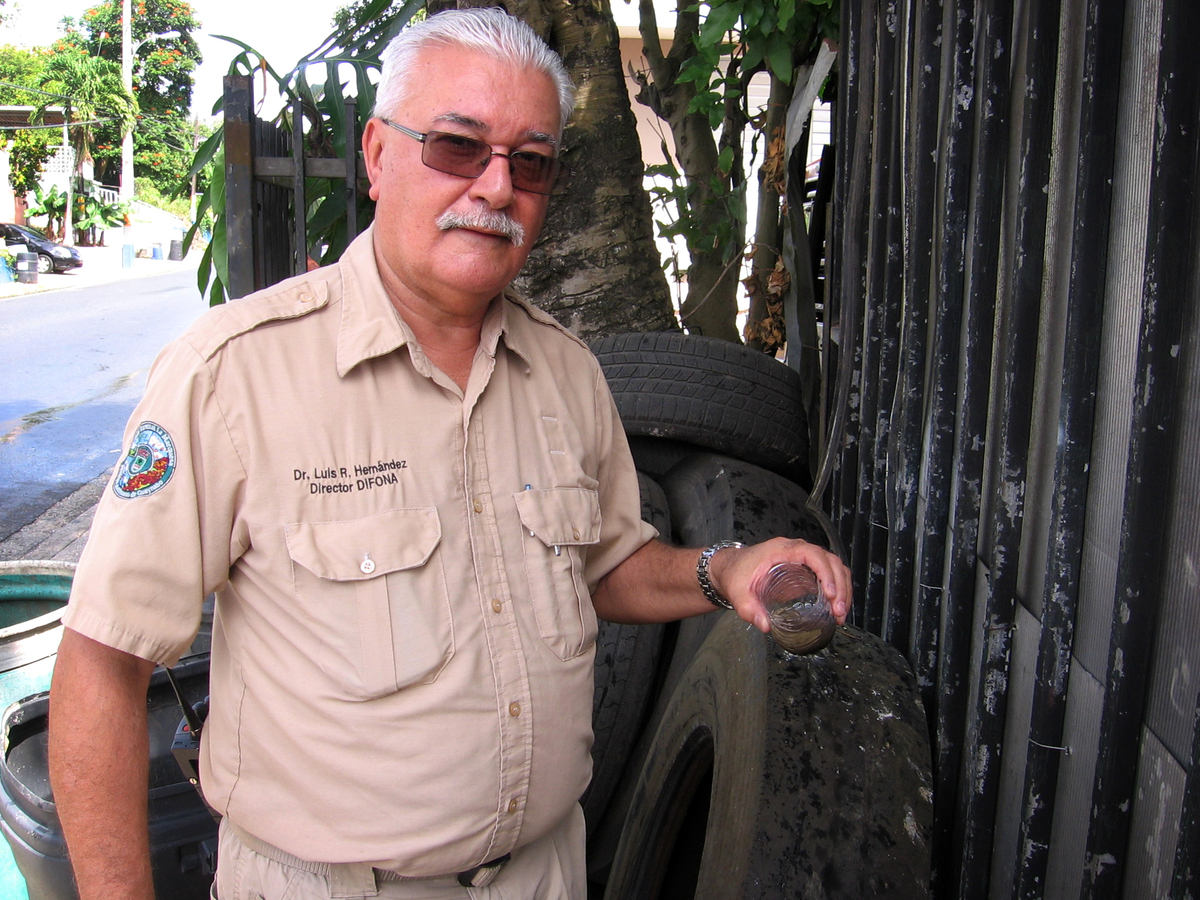 Mosquito larvae fill the cup of stale water that entomologist Luis Hernandez dips from a stack of old tires in a suburb of San Juan, Puerto Rico.

The Zika virus is a health threat not just to Latin America, but also to parts of the U.S. It's already a problem in Puerto Rico where there are nearly 120 cases so far, including five pregnant women. That's a concern, because Zika may be involved in causing birth defects.

The U.S. territory has declared a public health emergency and is working to protect residents from Zika and from the primary mosquito that carries the disease, Aedes aegypti. The species is largely responsible for the spread of Zika and many other tropical diseases, including yellow fever and dengue. It can breed anywhere it finds as little as a teaspoonful of standing water.

In Puerto Rico's 78 municipalities, emergency crews are looking for the places the mosquitoes breed. In Guaynabo, a suburb of Puerto Rico's capital San Juan, Luis Hernandez gets out of his truck to take a look at some old tires piled outside a home. Hernandez is an entomologist who advises local authorities on how to combat the A. aegypti.

He dips a cup into one of the tires and shows me what's inside. A dozen or more mosquito larvae wriggle in the water.

"That means this tire has been here for more than one week," Hernandez says. "Because of the size of the larvae, I know how long the tire's been here."

There are dumps of old tires from automobiles and trucks everywhere in Puerto Rico. That's because the recycling fees customers pay when they purchase tires don't cover the actual cost of disposal. Tires pile up and they become breeding grounds for mosquitoes.

Puerto Rico's legislature has passed an emergency measure to pay the cost of picking up and recycling tires. In Guaynabo, emergency response crews have already started collecting the tires, sending a grapple truck to clean up 15 sites in the municipality.

Crews are also working to remove standing water around schools, abandoned houses and even cemeteries, where flower vases can serve as mosquito breeding areas.

Unsealed septic tanks can also be a problem. Crews will inspect and install screens over vents where they're needed.

Puerto Rico's governor wants this work done in 45 days, before the start of the rainy season.

In Guaynabo, no cases of Zika have been reported yet. But long before most people had heard of Zika, Guaynabo was dealing with another tropical disease — dengue. It's sometimes called bonebreak fever, and can lead to death.

"We had many, many cases. Dengue was really hard here," says Dr. Silvia Medina, Guaynabo's former health director. Medina is helping Guaynabo now as a consultant, taking charts, pictures and information about Zika out to the community. She did something similar during the last dengue outbreak.

"We went into the communities, school, churches — everywhere," Medina says. "We had good results. When people are educated, they're healthy people."

As part of the public health emergency, Puerto Rico is asking all residents to check their homes and the homes of their neighbors for standing water and mosquitoes. A big problem in Puerto Rico is that most homes aren't air conditioned and many lack screens, so residents are exposed to more mosquitoes.

Hernandez throws up his hands in frustration. "If the mosquito is inside with you, and you close the window," he says, you and your family may still be bitten.

The Obama administration has asked Congress for more than $200 million to help Puerto Rico protect residents. Dr. Johnny Rullan is a former Puerto Rico secretary of health who is advising the government on its Zika response. After outbreaks of dengue, chikungunya and now Zika, Rullan says, it's clear Puerto Rico has to get serious about protecting residents from A. aegypti.

Puerto Rico is scrambling to adopt mosquito control measures in the next six weeks, before the rainy season begins. Rullan says these are measures that the island should already have put in place — over the last 30 years.