Accessibility links
Boston's Heroin Users Will Soon Get A Safer Place To Be High : Shots - Health News Set to open within a few weeks, the room will not be a place to inject drugs or get high, say health providers. Instead, a nurse will monitor heroin users as they come down from the drug's effects. 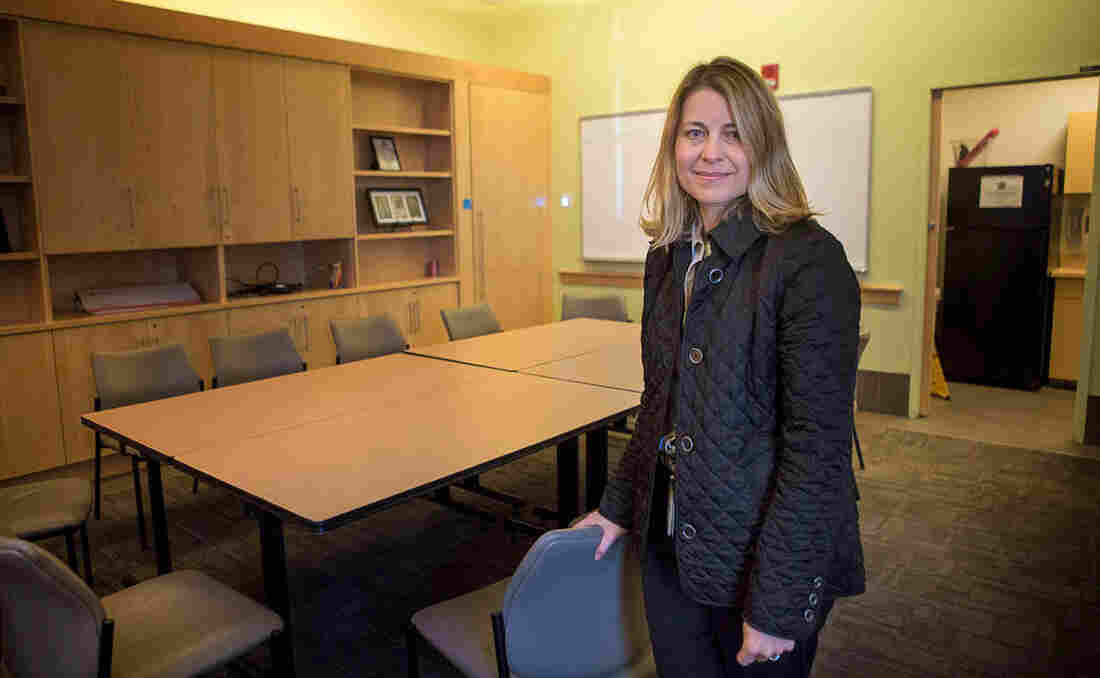 Dr. Jessie Gaeta, chief medical officer of Health Care for the Homeless at Boston Medical Center, stands in a conference room that will soon be converted to a place where patients high on heroin or other drugs can be safely monitored. Jesse Costa/WBUR hide caption 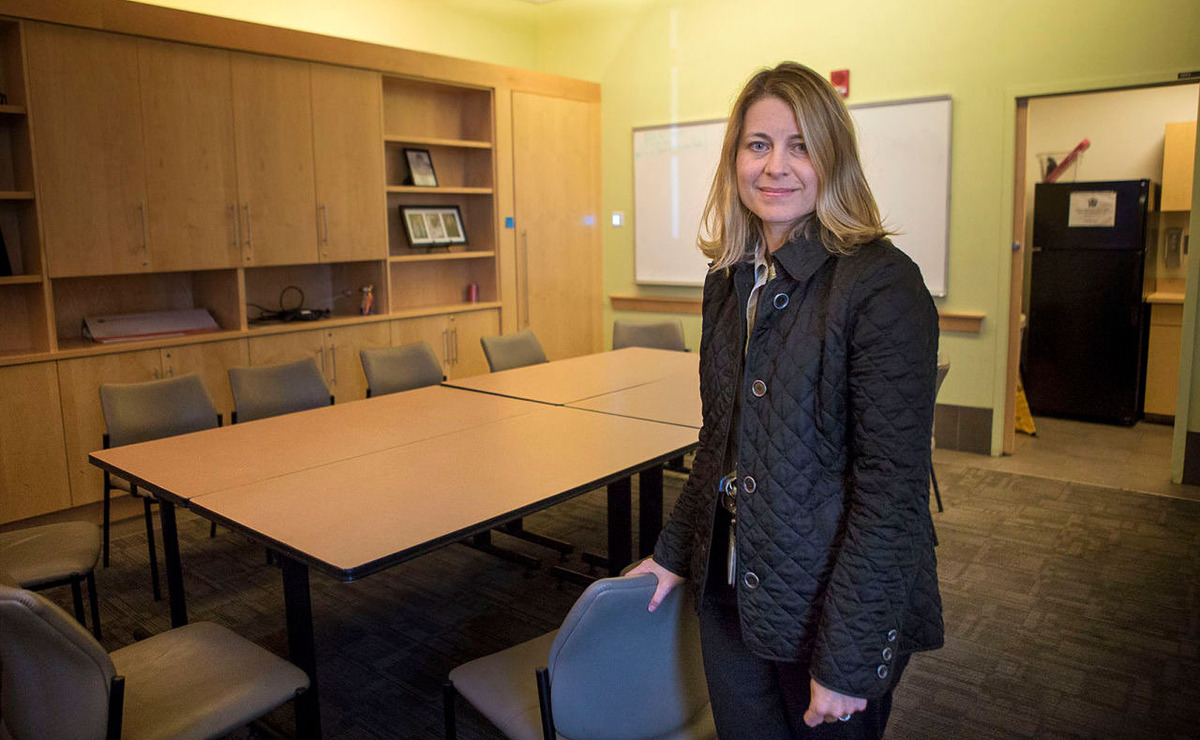 Dr. Jessie Gaeta, chief medical officer of Health Care for the Homeless at Boston Medical Center, stands in a conference room that will soon be converted to a place where patients high on heroin or other drugs can be safely monitored.

A Boston nonprofit plans to soon test a new way of addressing the city's heroin epidemic. The idea is simple. Along a stretch of road that has come to be called Boston's "Methadone Mile," the program will open a room in March with a nurse, some soft chairs and basic life-saving equipment — a place where heroin users can ride out their high, under medical supervision.

Dr. Jessie Gaeta, chief medical officer at the Boston Health Care for the Homeless Program, which initiated the project, walks the avenue several times a day on her way to and from work. The path takes her past the city's needle exchange program and a methadone clinic, as well as past one of the city's busiest emergency rooms, at Boston Medical Center.

"There are people — just in the few blocks around our building and hospital — that we're watching overdose on our way from the parking lot," Gaeta says.

Addiction treatment providers in the area have had hushed conversations for many months about creating a safe place where heroin users could get high. At least eight countries around the world have some sort of supervised injection facilities, monitored by nurses, where patients can both use drugs and rest or sleep off the effects.

With state statistics now indicating that roughly four Massachusetts residents every day die from an overdose, the need for some sort of new approach seems more urgent than ever, Gaeta says. Still, her organization plans only a limited version of the sort of "safe place" other countries offer. In Boston, patients will not be allowed to take drugs in the room.

All the funding isn't yet secured, she says, but the plan is to convert a conference room for this purpose. A nurse and outreach worker would move among 10 or so users to check breathing, other vitals and general health. If patients in the room need more than nursing care, there's a hospital right across the street.

Gaeta says staff in the room will "try like heck" to get patients coming off a high into treatment.

Ray Tamasi, the CEO at Gosnold, an addiction treatment network on Cape Cod, says his staff tried a similar approach with alcohol addiction about 15 years ago.

It was marginally successful, Tamasi says, "but it was taxing, very labor intensive and difficult. You have to have the resources to be able to do it."

Organizers of this "safe place" say they are desperate to try something new. Overdoses have become the leading cause of death among Boston's homeless men and women. But will users who inject drugs or take a cocktail of pills find their way to this room?

"I could say, for myself, I would use it just to be safe," says Nicole, who currently is getting treatment with methadone for her heroin addiction. She asked that we use only her first name, because some family members don't know about her heroin use.

"A lot of addicts are homeless or by themselves," Nicole says. "So, to have somebody — especially a nurse — keep an eye on you, and have a place to go when you're under the influence or high ... and somebody monitors you ... that's an awesome idea."

A scientific review in 2014 of 75 research articles found that supervised injection facilities — the type of "safe room" offered outside the United States — reduced the rate of overdose. And a 2008 study found that patients in Vancouver, British Columbia, and Sydney, Australia, who were monitored by a nurse while they used heroin were more likely to end up in treatment than patients who were not monitored.

The use — or lack of use — of these safe rooms in various countries highlights a divide in addiction treatment, says Dr. Barbara Herbert, president of the Massachusetts chapter of the American Society of Addiction Medicine.

"The controversy," Herbert says, "is, does it encourage people to keep using if we make their lives less dangerous and less miserable, or can we scare people into care?"

Herbert says many health care providers in the field of addiction medicine have moved away from the "tough love/abstinence-or-nothing" approach and instead now favor options like the "safe use room."

"It's not that we don't want people to be drug free," Herbert says. "But dead people don't recover."

The safe use room is part of what's known in the world of addiction treatment as "harm reduction." The approach includes needle exchange programs so that users don't spread infections, training in the use of naloxone, the opioid reversal drug, and more education about the dangers of opioid prescriptions and use. Some addiction experts say Massachusetts must focus more on reducing the dangers of drug use and stop expecting users to just stop.

"We're having problems reducing people's involvement with drugs," says Vaughan Rees, an addiction expert at the Harvard School of Public Health. "Short of being able to implement treatment, we need to think about how we can reduce the risk of drug use."

The idea is still widely controversial among both elected leaders and those in public health. But Charlie Baker, the state's Republican governor, says he's open to hearing what Boston Health Care for the Homeless has planned.

"I have tremendous faith in them," Baker says, "and think because they are on the ground and because they are closer, most of the time, than practically anybody else who's working with the homeless population, they tend to be a pretty good bellwether about good ideas."

And Boston Mayor Marty Walsh, who speaks openly about his own past alcohol addiction and his recovery, says creating a space that's supervised in this way could be an effective method of bringing heroin users into short-term care.

"I'm up for trying anything when it comes to addiction and active using," Walsh says. "If we can help some folks — homeless folks in particular — we should try anything."

Boston police say they have no concerns about the program's "safe room" as planned. They would not support allowing injections inside.

"We can't allow the illicit distribution or sale or transfer of narcotics to be happening and not take action against that," says Lt. Detective Michael McCarthy, a spokesman for Boston's police department.

Some in the addiction community say a room where heroin users who are high would get care, not criticism, is another sign that attitudes about addiction are shifting.

"I think we've come a long way," says Joanne Peterson, who started a parent support network in Massachusetts called Learn to Cope. "There's a lot more talk and a lot more compassion and understanding because there's been so many deaths. This is an enormous epidemic."

In just the past month, EMTs revived six people after overdoses in the neighborhood where Boston Health Care for the Homeless plans to open its safe use space for heroin users.