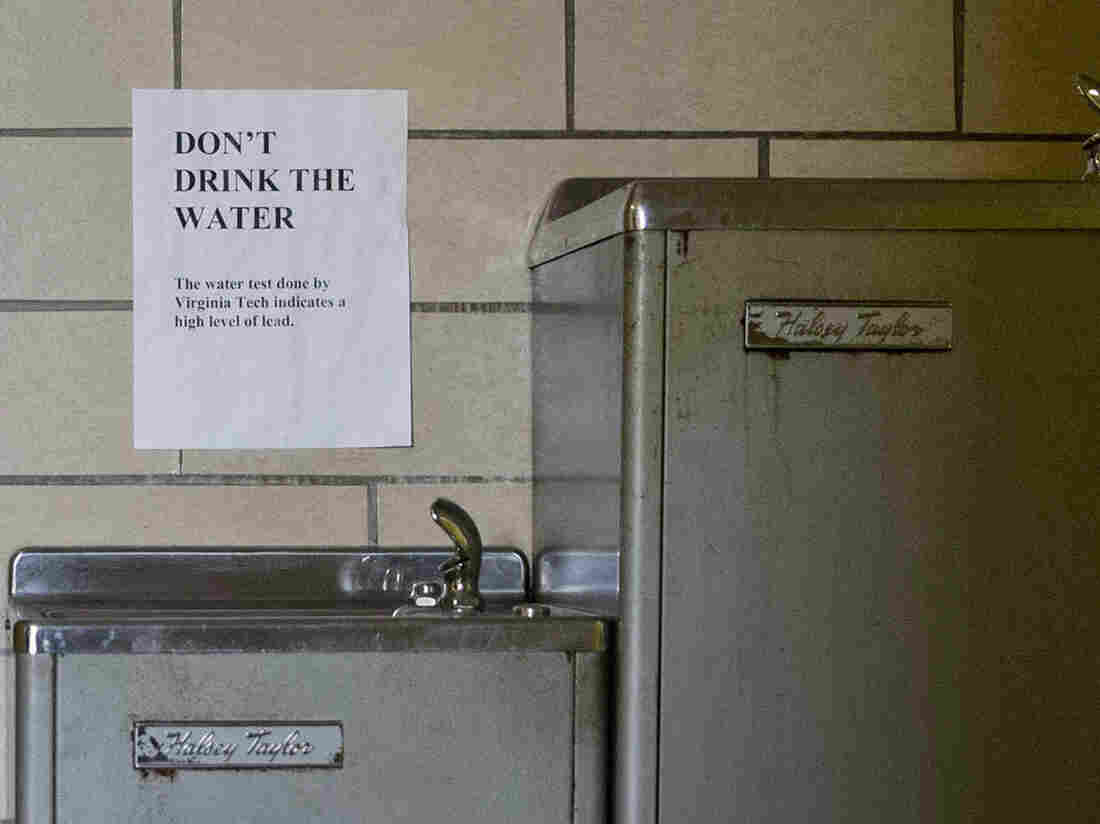 Signs warn not to drink the lead-contaminated water from a water fountain in Flint, Mich. Jacquelyn Martin/AP hide caption 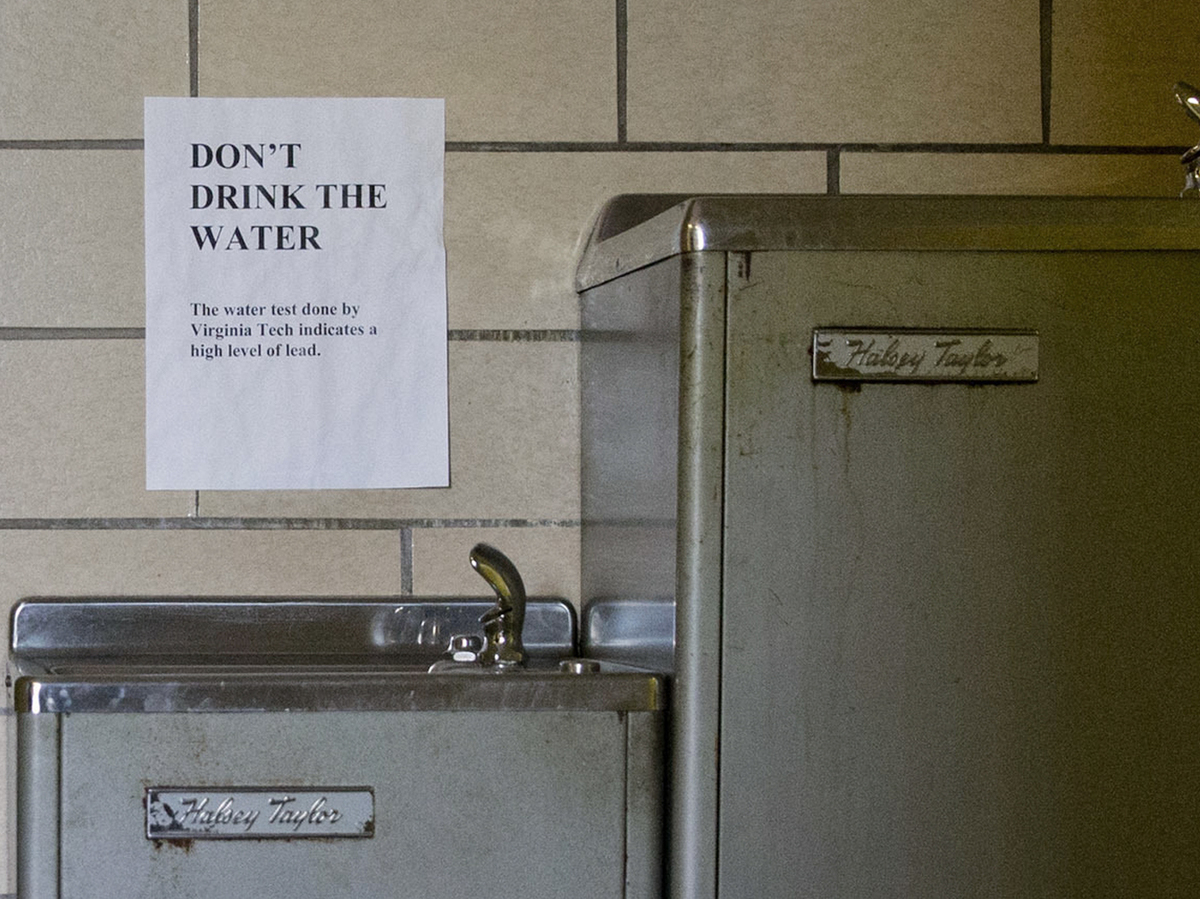 Signs warn not to drink the lead-contaminated water from a water fountain in Flint, Mich.

Flint, Mich., isn't the only American city with a lead problem. Though the health crisis in Flint has highlighted the use of lead in water pipes, author David Rosner tells Fresh Air's Terry Gross that lead, which is a neurotoxin, can be found throughout the U.S. on walls, in soil and in the air.

"The problem with lead is that it's now really everywhere, and we've created a terribly toxic environment in all sorts of ways," he says.

Lead is particularly dangerous to young children. In their book, Lead Wars, Rosner and co-author Gerald Markowitz describe the ways in which even small exposures can interfere with a child's brain development and cause lasting learning challenges.

Rosner adds that even a small amount of lead can have a lasting effect on a child's health. "As early as the 1910s and 1920s, [doctors] were documenting children who had absorbed lead on their fingers as dust and had put their hands in their mouth and actually began going into convulsions," he says. "It's not like you need a lot of it." 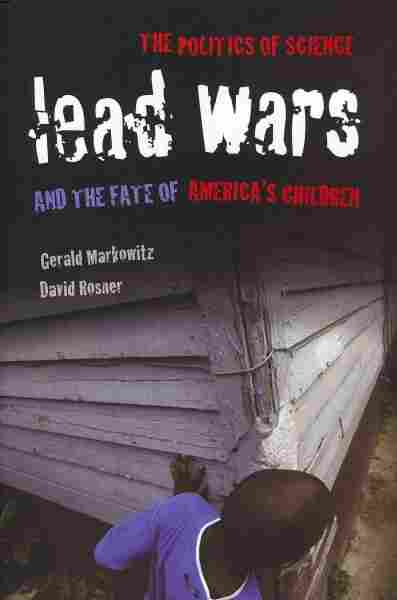 The Politics of Science and the Fate of America's Children

by Gerald Markowitz and David Rosner

Gerald Markowitz: The average can of paint in the 1900s to around 1950 contained up to 50 percent of lead carbonate, which is lead. So it's a lot of lead, and it takes just a couple of grams of lead to send a kid into serious damage. So, what we did essentially for 50 years is cover our entire nation. During the period when the economy was moving from an agricultural society to an industrial society to an urban society, we built most of the structures that surround us even today ... in inner cities and poorer communities, and those were all being painted at one point or another, during that 50-year period, with lead. Our cities expanded dramatically, and with it went the covering of this society with lead paint.

On the use of lead in pipes

Markowitz: In Washington, D.C., just a few years ago there was a tremendous scandal about lead in the drinking water and lead even in the public schools. And one of the unfortunate things is that we do not have a testing program for lead in public schools in the water, so we don't really know how many children are being exposed to lead in the water in their schools. ...

David Rosner: Not all cities are using lead pipes. Some water systems actually use copper and iron and cement as their piping source. So it's often a problem in cities that were built between the early 1900s, late 1800s and the early 1940s, and in cities where cheaper housing sometimes exists, because lead is relatively cheap, and in which unions did not have any power to make sure that lead was not used in their pipes. In the early part of the century, for example, in New York City, we don't have as big a problem with lead in pipes, because many of the unions demanded that we use copper and essentially we, by happenstance, don't have that kind of problem.

On how people figured out that lead was toxic

Rosner: During the 1920s, researchers in the United States and in England and elsewhere began to really identify lead poisoning in children and they identified the toys and cribs and the woodwork as a source of lead, and they said, "We have a problem here, and the problem is that the child ... lives in a lead world. Everything around them by this point is covered with lead — their toys, their cribs, their playthings, their woodwork, the walls — everything has some lead in it."

And these kids who crawl on the floor are getting this dust on their hands, putting their hands in their mouth, and absorbing lead, and lead, we know, accumulates in the body and ... that's the problem. So by the 1920s the medical and public health community had essentially identified this major problem. The industry itself began a marketing campaign and the marketing campaign essentially tried to assuage the worries of the larger community about the dangers of lead. They started saying, "Lead in our pipes and lead on our walls and lead in our paint is not a health problem."

Rosner: We can all remember in the early '70s and '80s when we were concerned about issues like hyperactivity in schools, attention deficit disorder, behavioral problems. Some researchers now — and it's hard to figure out if this is accurate — argue that the crime epidemic was partly due to lead exposures, because of the inability of kids to restrain behaviors. ...

So there are all these arguments. Any individual issue is hard to say is due to lead, but ... when we compare groups of children who have lead in their blood and lead in their bones and lead in their teeth, historically those kids have bigger problems than kids who don't. And that's what we really know. And they have problems in school. They have problems learning. They don't do as well on tests. They have inability to follow lines. So what we know as a collection of children, there's a problem.

On the Lead Industries Association's racist PR campaign in the 1950s

Rosner: One of the interesting things and terrifying things and horrifying things about this whole story is the use of race as a means of, in some sense, ignoring what was known for close to a century. In the 1950s we found these documents and these letters between people in the Lead Industries Association and even the federal government that basically say that the problem of lead poisoning will exist until we can get rid of all our old housing, and that will never happen. The second point that they make is that it's only — this is their quote so please understand that — it's only a problem among "negro and Puerto Rican families," and that it's probably due to the "ignorance of those families" that there is a problem with lead poisoning.

Markowitz: That they were not educated enough to keep lead away from their children.

Markowitz: The lead industry went around the country saying to doctors, "You haven't proved completely that lead is the cause of children going into convulsions and children dying. ... You need to do much more sophisticated studies. You need X-rays. You need a variety of other techniques." And meanwhile, the medical community was saying the number of cases we have is a vast underestimate of the number of children, because the lead poisoning symptoms mimicked the results of high fevers and other kinds of conditions. But the lead industry was saying the opposite. They were saying, "Lead poisoning was overstated and that doctors were misdiagnosing children."

Read an excerpt of Lead Wars