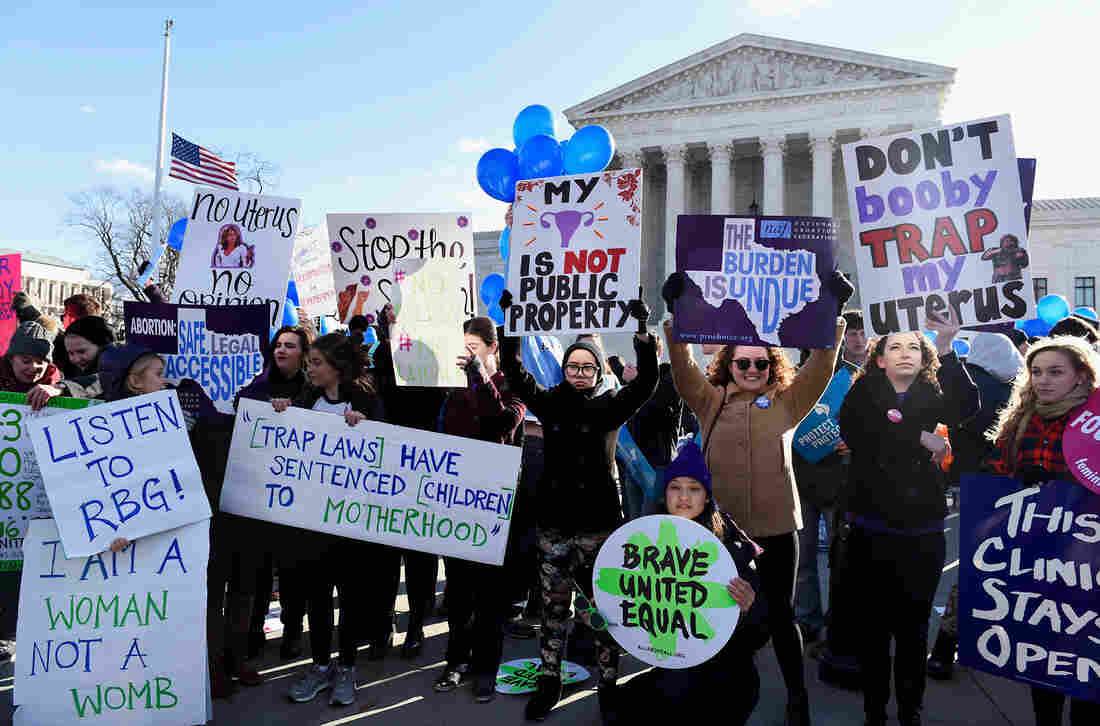 Supporters of abortion rights rallied Wednesday outside the U.S. Supreme Court, where justices heard arguments about a Texas law that imposed health and safety requirements on clinics in the state. Susan Walsh/AP hide caption 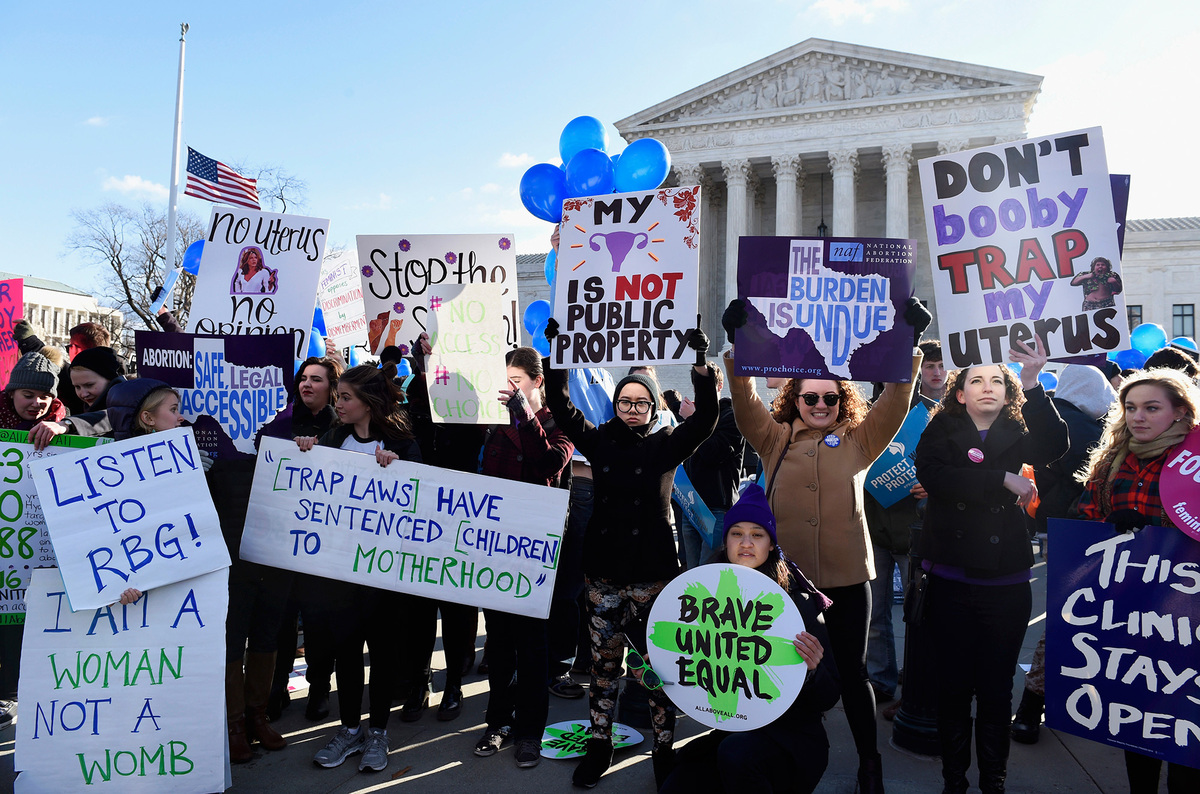 Supporters of abortion rights rallied Wednesday outside the U.S. Supreme Court, where justices heard arguments about a Texas law that imposed health and safety requirements on clinics in the state.

The fate of the controversial Texas abortion law is in the hands of the Supreme Court, and a decision isn't expected before June. But how this particular law reached the high court and how its opponents have gathered evidence to strike it down represent fresh twists in an acrimonious national debate stretching back to the 1970s.

Many of the provisions of the 2013 Texas law, known as HB 2, are based on model laws created by Americans United for Life, a group that opposes abortion rights and that has worked for years to get a carefully crafted state bill on health and safety provisions surrounding abortion before the Supreme Court. On the other side, abortion-rights forces have been fighting the law with data from university-based research on how the law is affecting women's access to abortion services.

The court is looking at two provisions of the law. One requires doctors who perform abortions to have admitting privileges at a hospital no more than 30 miles from clinics that provide abortion services. The other requires the clinics to meet the same standards as ambulatory surgical centers that perform more complicated procedures than the typical first-trimester abortion.

Clarke Forsythe, senior counsel for Americans United for Life, said the group's most recent focus on health and safety provisions for abortion clinics was spurred by several events. One was the case of Kermit Gosnell, a Philadelphia doctor who was convicted in 2013 of murder in the deaths of three babies and one woman in his unregulated abortion clinic. Forsythe said that "was an alert to public health officials in states to upgrade their standards."

The other was the Supreme Court's 2007 decision in Gonzales v. Carhart, which upheld a ban on a specific abortion procedure used late in pregnancy. While that decision upheld a federal law, said Forsythe, it also "leaves more deference to the states to protect maternal health."

The Texas case, said Forsythe, "gives the Supreme Court the first opportunity since Roe v. Wade to uphold health and safety regulations in the first trimester [of pregnancy], when 90 percent [of abortions] are done."

But opponents of the law are working hard to make sure that doesn't happen. Researchers for the Texas Policy Evaluation Project, which is sponsored by the University of Texas, Austin and known as TxPEP, have been studying the impact of tightening of reproductive health services in Texas since before the state's abortion law was enacted.

The project formally began after the Texas Legislature cut the budget for family planning by two-thirds in 2011. But research on the issue had begun even before that by Daniel Grossman, an OB-GYN and reproductive health researcher from the University of California, San Francisco. He was in Texas at the time and was studying women living near the Mexican border who had trouble getting reproductive health services and were traveling to Mexico for care instead. "It was not just for [birth control] pills, but for Pap smears and sterilizations and that sort of thing," he said.

The Legislature's funding cuts prompted interest in expanding Grossman's study and looking at the issue around the state. "We were just really concerned that people we knew well in the El Paso area, that they were already struggling to meet their reproductive health needs," he said.

When the Legislature passed the abortion bill two years later, he said, "we were already on the ground and had developed relationships with the abortion providers" in the state. "We really had a sense of all the different ways this was going to play out, so we were able to respond pretty quickly."

That fast turnaround made the research project a novel one. "Usually researchers rely on state statistics to look at the impact of these kinds of policies," Grossman said. "But there's such a delay in getting those kinds of statistics."

Having a head start on the research and access to their own data has allowed the project to release analyses even as the fight was going forward in the courts. For example, researchers were able to document the decline in the number of doctors performing abortions since the law was enacted; the increase in wait times for women seeking abortions; and insights into how women seeking abortions were affected by the various obstacles put in their path by the law, such as mandatory ultrasounds and waiting periods.

And while Grossman didn't speak at the Supreme Court arguments, U.S. Solicitor General Donald Verrilli cited his work, as did the attorneys on both sides of the case, along with Chief Justice John Roberts and Associate Justice Stephen Breyer.