Accessibility links
Can't Get In To See Your Doctor? Many Patients Turn To Urgent Care : Shots - Health News A recent poll shows 27 percent of Americans have visited an urgent care center in the past two years. Why? Most cite convenience. 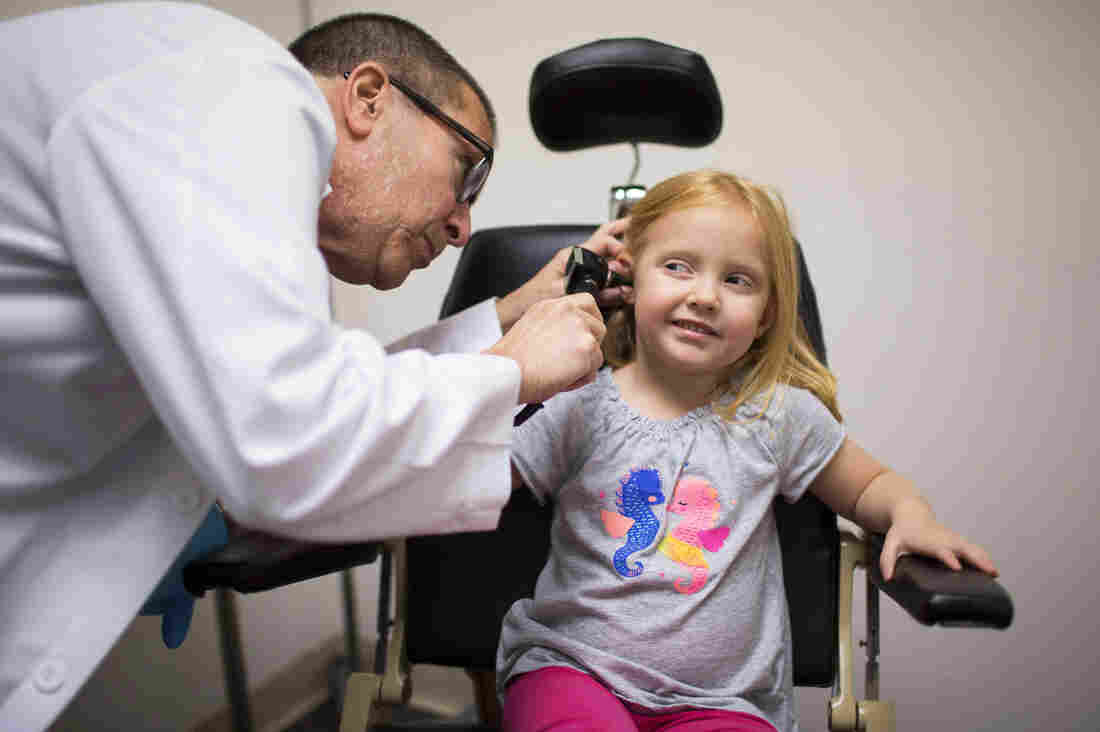 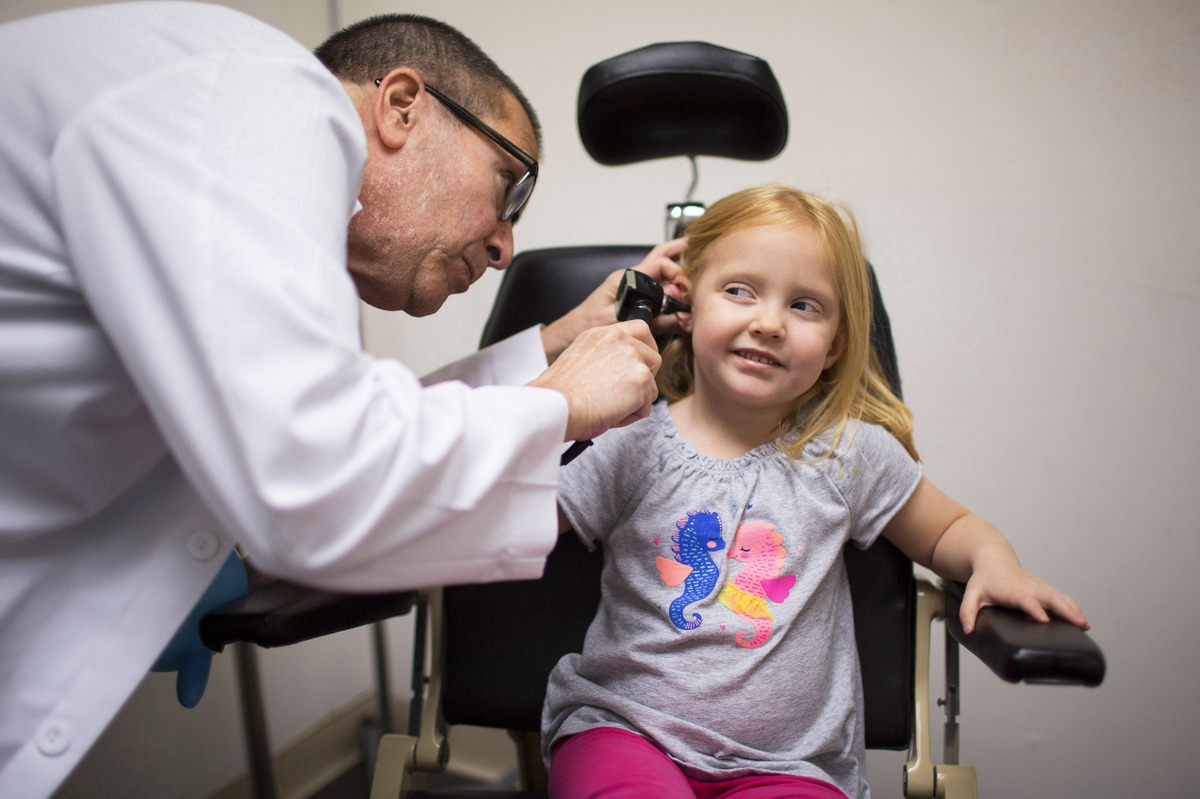 Dr. Max Lebow examines the ear of 4-year-old Charlotte Anderson at Reliant Immediate Care in Los Angeles. Charlotte's mom brought her to the urgent care clinic because Charlotte was having balance problems.

Though the majority of Americans have a primary care doctor, a large number also seek treatment at urgent care centers, statistics show. For many people, the centers have become a bridge between the primary care doctor's office and the hospital emergency room.

Urgent care is not meant for life-threatening emergencies, such as a heart attack, stroke or major trauma, doctors say. But it is designed to treat problems considered serious enough to be seen that day — conditions like a cut finger, a sprained ankle, severe sore throat, or the sort of infection 25-year-old Dominique Page recently experienced.

Page, who lives in Los Angeles, suspected she had a bladder infection when she woke up that morning. Instead of calling her primary care doctor, she headed straight to the nearest urgent care clinic.

"I knew if I made an appointment at my doctor's office, it wouldn't be for today," she explains. "Their appointments are usually booked."

Page's decision seems pretty typical. In a recent poll conducted by NPR, the Robert Wood Johnson Foundation and the Harvard T.H. Chan School of Public Health, most people reported going to urgent care because they believe it is more convenient and takes less time than going to their regular doctor. One in 5 said that at least once in the past two years, they were unable to see their regular doctor when they needed medical care, mostly because the doctor didn't have any available appointments, the office was closed or the doctor was out of the office.

"We don't even know where the key to the front door is," says the clinic's medical director, Dr. Max Lebow, "because at least in the 10 years that I've been here, we've never closed the front door."

For years, Lebow says, he worked in a hospital emergency room, where he saw lots of people who "never should have been in the ER in the first place." In his experience, he says, maybe 20 percent of the ER patients are admitted to the hospital, which means that about 80 percent are sent home. 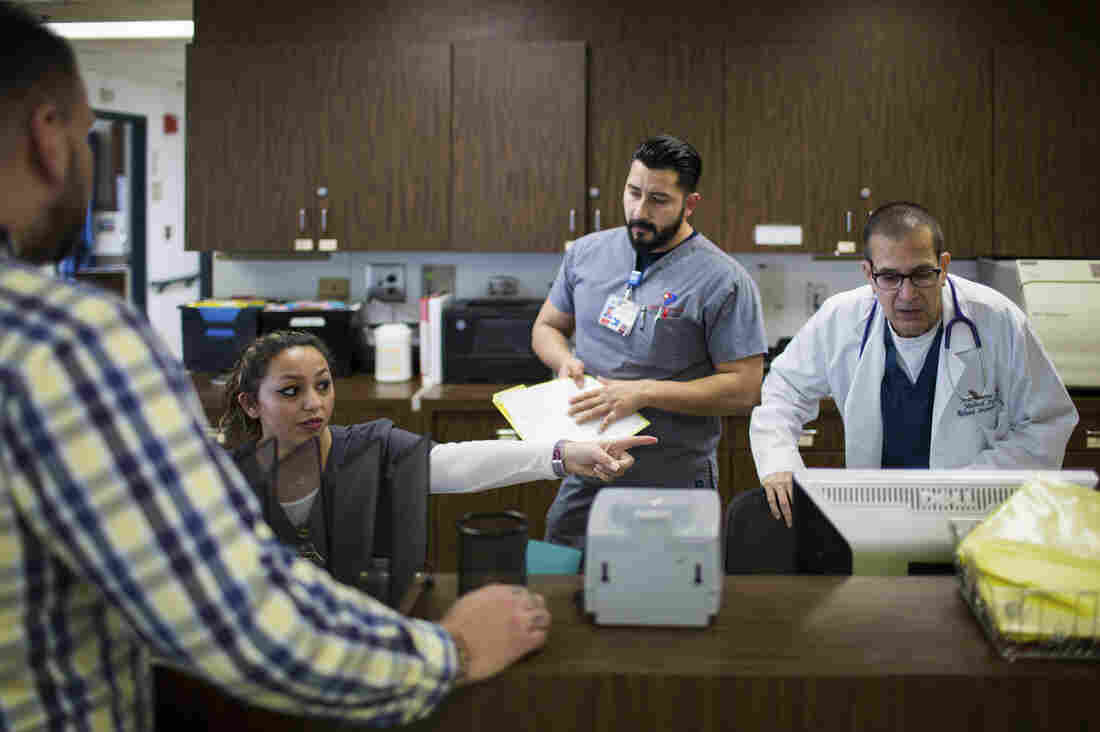 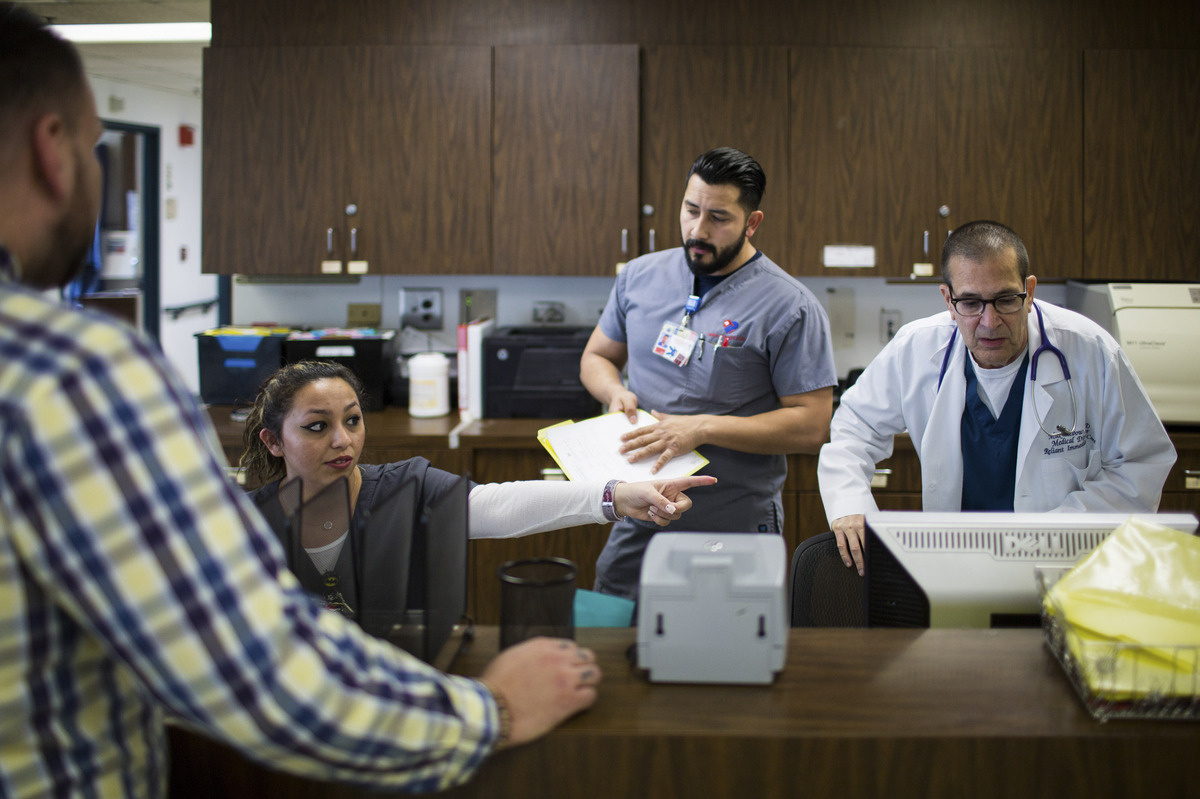 Lebow (far right) is medical director of this urgent care center run by Reliant Immediate Care Medical. The clinic is adjacent to Los Angeles International Airport and is open 24/7.

National statistics suggest an even higher percentage tend to leave the ER without needing a hospital stay. Of those patients, Lebow says, probably 75 percent could be seen in a less intensive setting — like an urgent care center.

After tests, Lebow confirmed that Page had a bladder infection and prescribed antibiotics. Page was relieved to have a diagnosis and treatment. She was in and out in less than an hour, she says, and — even better — her visit cost far less than going to a hospital ER, which charges a "facility fee" just to walk in the door.

That fee — which typically ranges from $300 to $500 — helps cover the cost of having on hand, 24/7, all the equipment and staff needed to treat even the most extreme emergencies, explains Dr. Roger Hicks, an emergency medicine doctor on the governing board of the Urgent Care Association of America.

According to a recent review from the National Center for Health Statistics, visits to the ER can easily run more than $1,000 for adults. The average visit to an urgent care center, in contrast, hovers around $150.

Nationwide there are now more than 7,000 urgent care centers across the country, and Hicks calls the industry's growth in the past couple of decades "explosive." He says patients tell him they appreciate the cost savings and convenience — most urgent care centers are open in the evenings and on weekends and holidays. In large, urban areas, many are open around the clock.

In our poll, most patients said they found the cost of their visits "reasonable." And the majority — 75 percent — rated the care they received as "excellent" or "good."

But 25 percent of those polled described their care at an urgent care center as just "fair" or even "poor."

One of those poll respondents was 31-year-old Syntyche Toniy, who lives in Orlando, Fla. Toniy went to her local urgent care center after cutting her hand while gardening, and says she found the process there "disorganized."

After registering at the front desk, she waited another two hours before seeing a doctor, who then sent her to the hospital emergency room anyway — for stitches. 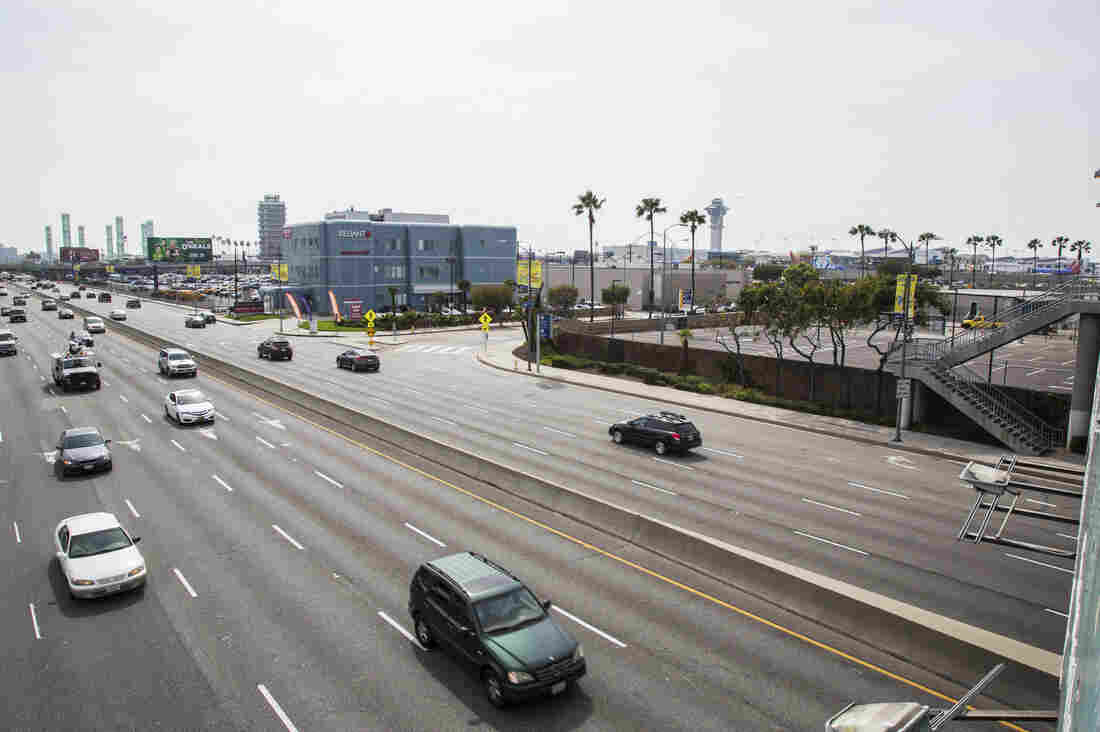 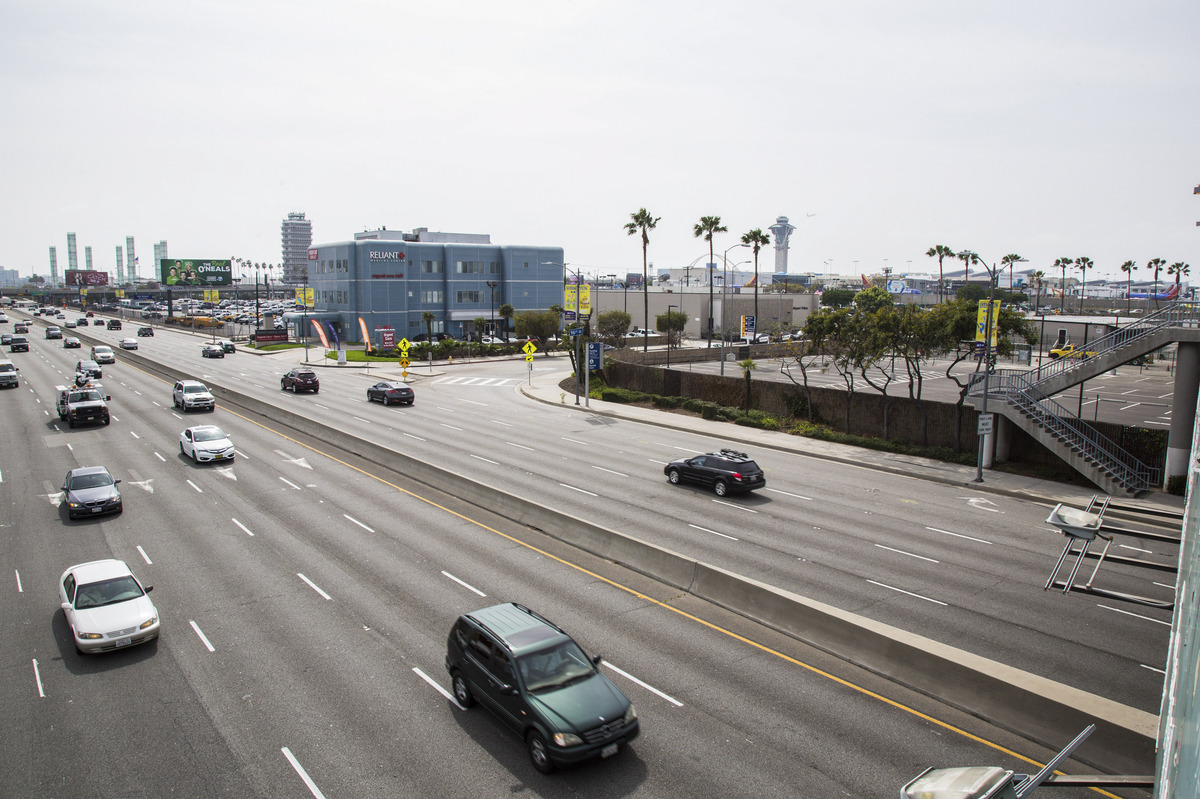 The location of Reliant's urgent care center near the airport exit makes it convenient for travelers and Los Angeles residents alike.

Another woman who responded to the NPR poll — 69–year-old Carole Lamb in Ashland, Ore. — recalls a frustrating experience during her visit to an urgent care center for symptoms of bronchitis. Lamb told the doctor that she'd previously been prescribed a medication for her infection, but it hadn't worked very well.

As she was explaining the situation, the doctor got up, walked out of the room and sent in an assistant who gave her a prescription for the very same medicine.

"I thought, really?" Lamb says. Fortunately, she adds, she was able to get an appointment within a few days with a new primary care provider — who successfully treated her infection.

Hicks says his association continues to work hard to improve quality and maintain high standards in urgent care centers nationwide. While most centers are standalone facilities, some are embedded in large, integrated hospital systems.

At the UCLA Urgent Care facility in Santa Monica, Dr. Vladimir Manuel, the medical director, says the beauty of a large integrated system is that primary care, urgent care and hospital care are all connected, so medical records are shared. Not only is that sort of system more efficient, he says, but patient care is improved, too.

For example, Manuel says, if someone with asthma shows up at the urgent care center two or three times for difficulty breathing, Manuel will reach out to the primary care provider and let them know the patient's asthma is not under control.

He sees his center's job, in part, as helping each patient establish a better continuity of care, so those sorts of medical emergencies arise less frequently. And if patients don't have a primary care provider, Manuel helps them find one within the system of UCLA Health.

One thing is for sure, says Hicks: Until the shortage of primary care doctors eases nationally, the number of urgent care centers — and their use — will continue to climb.