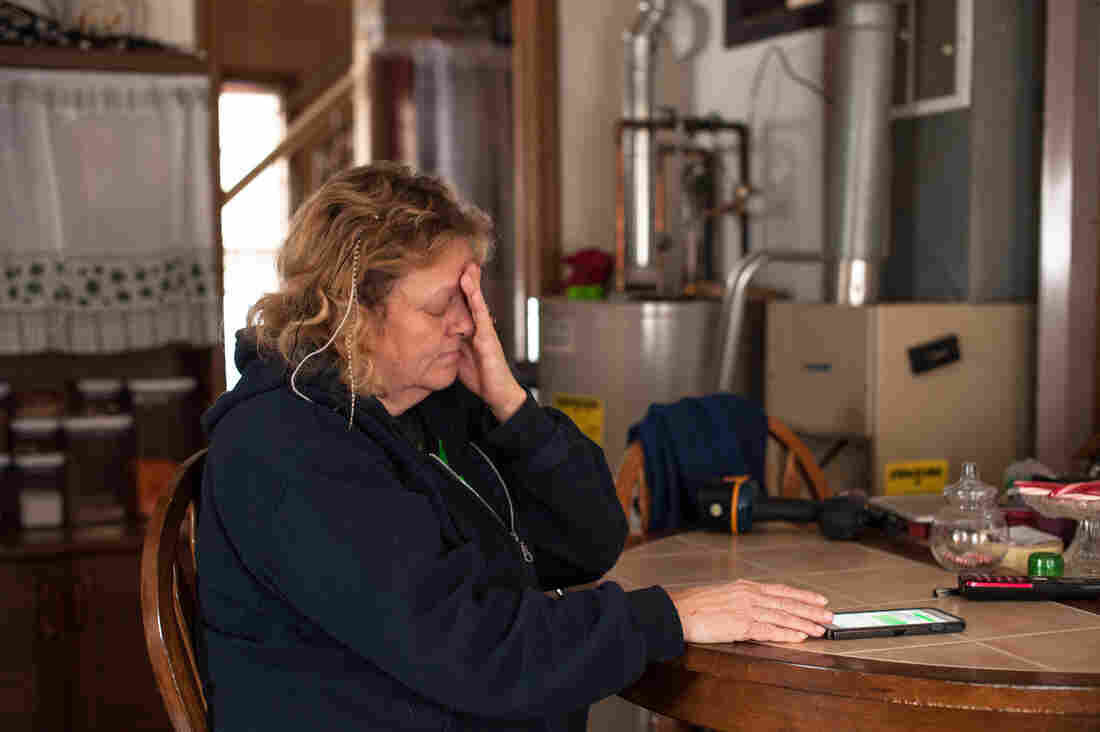 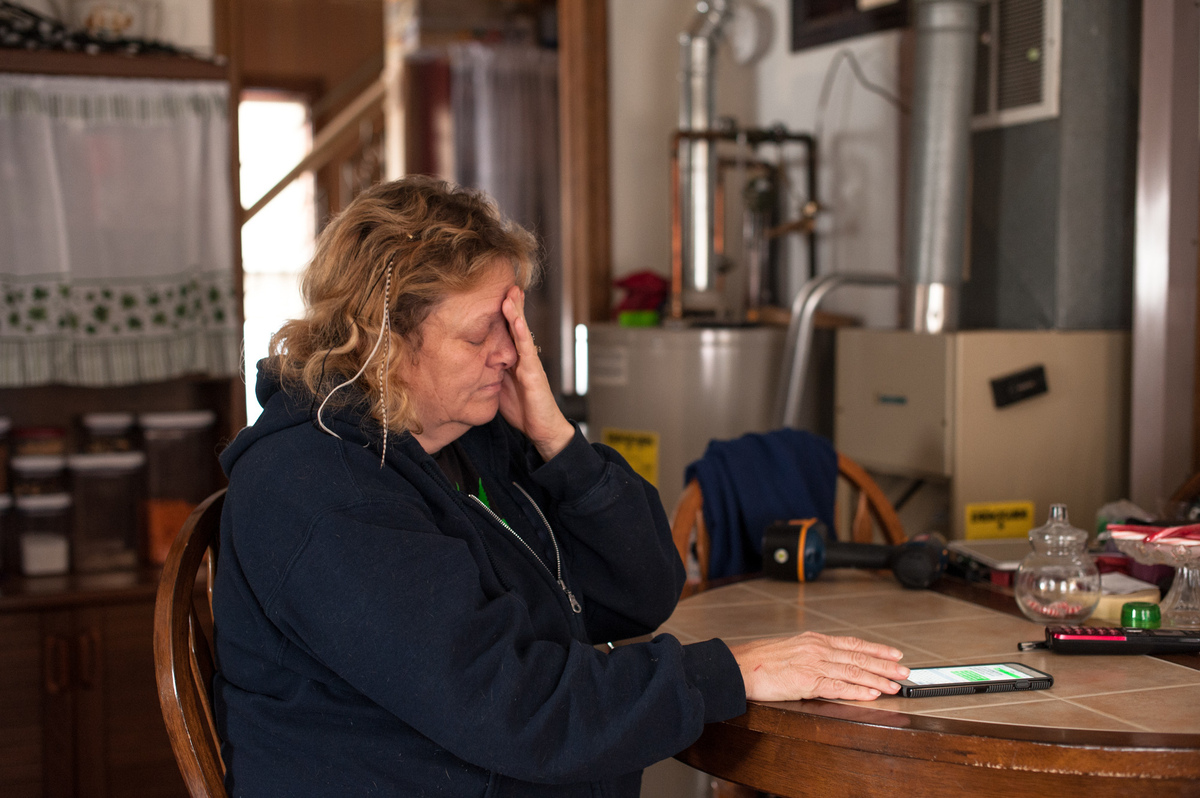 For Barbara Radley, there is "before" and "after." Before was when she could work — moving furniture, and driving a long-haul truck.

"It was nothing for me to throw a couch on my back and carry it up a flight of stairs," says the 58-year-old from Oshkosh, Wis.

Then there's after. After she herniated five disks in her back. And after, she says, her blood pressure medicine destroyed her pancreas.

And she is bankrupt.

"Well, the medical bills were just piling up," Radley tells Shots. "We couldn't handle it. We just couldn't keep up."

Radley is among the 26 percent of people in a recent poll who say health care expenses have taken a serious toll on family finances. The poll, conducted by NPR, The Robert Wood Johnson Foundation and Harvard's T.H. Chan School of Public Health, shows that even people with medical insurance are still struggling to pay medical bills.

Radley and her husband, also a mover, were getting by on his paycheck and her disability payments, which together brought in about $30,000 a year.

But, two years ago, they were hit with a double whammy. His company changed to a health insurance plan that required the couple to pay higher premiums — about $700 a month — higher copays and a $5,000 deductible.

Then her husband needed emergency surgery and missed a few months of work.

They moved out of their family home and rented a place from her daughter-in-law. They stopped eating out — except once in a while, when they'd get a free meal at their church.

Still they ended up in bankruptcy early last year. They were able to write off their old medical debt, but the health problems didn't go away. Barbara's costs are constant and her husband had another surgery last fall. In the past 12 months they've racked up an additional $10,000 in unpaid medical bills.

"Everybody wants your money and it's like, 'Well, stand in line; you ain't gonna get none,' " Radley says with exasperation.

According to the poll, Radley has plenty of company. Of the people who said health costs have caused them serious problems, 7 percent ended up in bankruptcy. 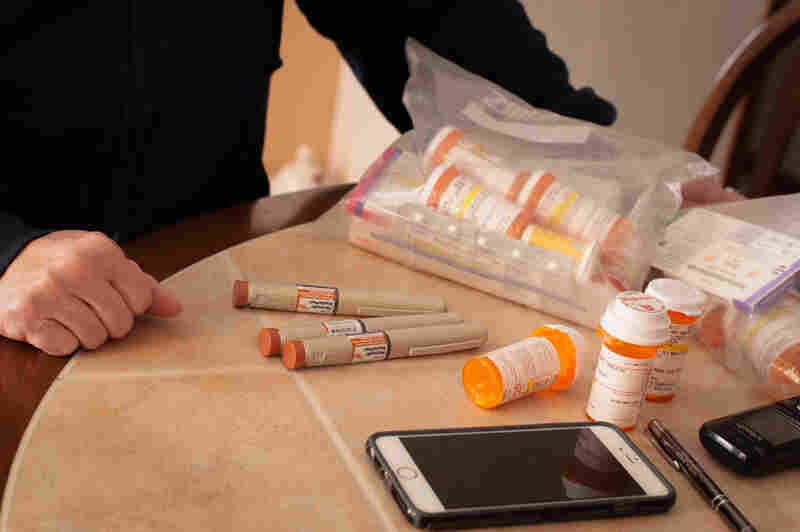 This week, Radley has been debating whether to take out a payday loan or sell something on Craigslist to cover her insurance plan's $454 copay for a two-month supply of insulin. Jason Houge for NPR hide caption 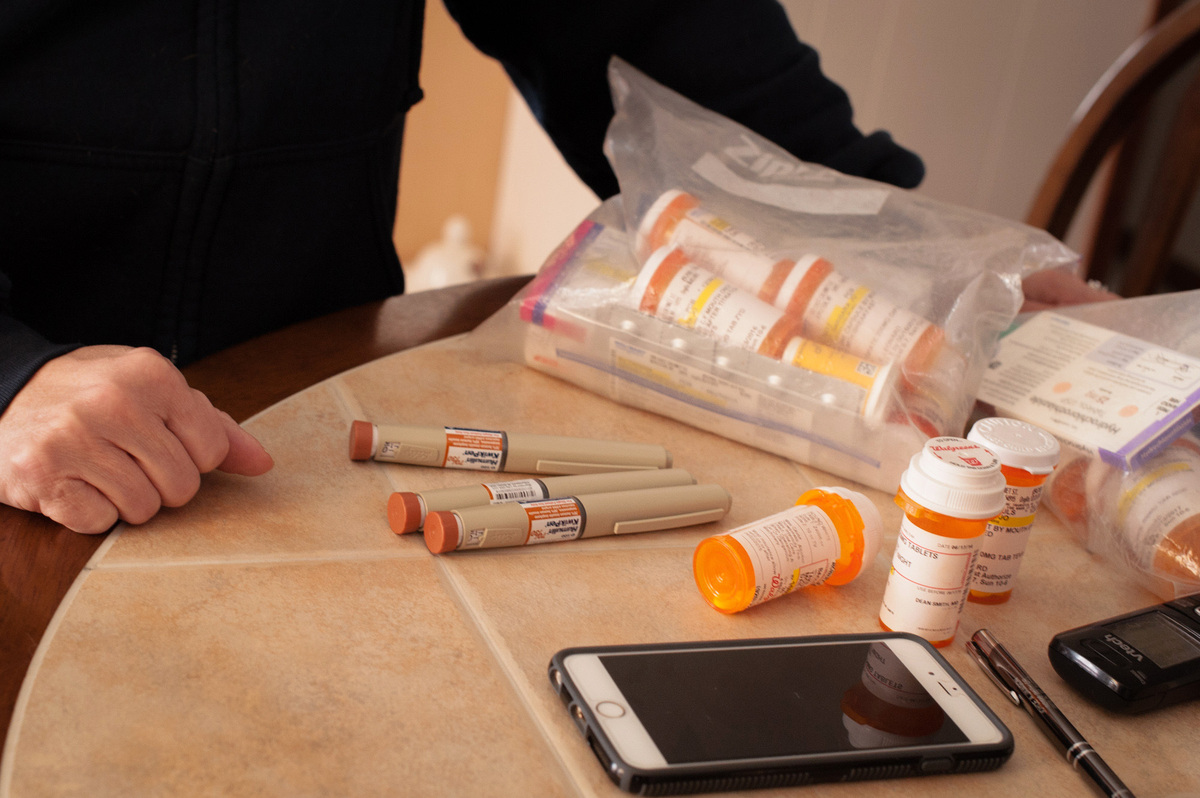 This week, Radley has been debating whether to take out a payday loan or sell something on Craigslist to cover her insurance plan's $454 copay for a two-month supply of insulin.

"There are times I check my blood for my insulin and I know I only have two pens left," she says. "And I really can't afford it for another week and a half. Well, then I take a lower dose of my insulin. Otherwise I'll just skip it."

But skipping insulin also can be dangerous, Radley knows.

"If I would skip it for several days that would put me in the hospital," she says, "and that just gives me more bills."

On Monday she was trying to decide whether to take out a payday loan or sell something on Craigslist to cover her insurance plan's $454 copay for two months of insulin.

A study last year by the Kaiser Family Foundation found that companies are shifting health care costs to their employees. Workers' share of health insurance premiums for their families rose 83 percent from 2005 to 2015, the survey shows. The amount employees had to pay for deductibles for individual insurance increased 255 percent from 2006 to 2015. The increases are far higher than growth in workers' wages.

That hurts the sickest people the most, says Linda Blumberg, a senior fellow in health policy at the Urban Institute. A study by her organization shows health care has become more affordable since the Affordable Care Act was implemented two years ago. Still, the research found, about 17 percent of adults in the U.S. continue to struggle to pay their medical bills.

"When we see higher deductibles, higher copays, higher coinsurance, higher out-of-pocket maximums on these insurance plans, the people who are most affected are those that have the most need for medical care," Blumberg says.

Separately, 19 percent of poll respondents say they didn't fill a prescription because of the cost. Mary Lena Warden, 78, of Cleveland, Texas, is among them.

Warden lives alone and uses a wheelchair to get to the drugstore around the corner and to her doctor down the road. She pays $147 a month for Medicare, the government health insurance program for the elderly and the disabled. That's out of the $1,400 she gets each month in Social Security payments.

Warden says she doesn't qualify for extra help, like food stamps or Medicaid, the federal health care program for the poor.

"All my money is gone by the time I pay my rent, my gas, my lights, my water and my copay for the doctor," Warden says. "Everything else is gone."

Just two weeks ago, Warden skipped an appointment for an echocardiogram because she couldn't afford the $100 copay. And she is trying to decide whether to fill a prescription for a drug called Neurontin, which dulls the nerve pain in her leg — pain caused by a severe car accident. The last time she picked up the drug, her copay was $159.95.

"The public perception may be that, because Medicare is so popular, it is gold-plated Cadillac coverage," Altman says. "But people who are on Medicare know that those costs can really bite."

Altman says Obamacare has given nearly everyone in the U.S. access to health care. About 89 percent of people now have insurance in some form, according to the Department of Health and Human Services.

The next big challenge, Altman says, is to stop people from going broke when they get sick.