Accessibility links
How Best To Test For Zika Virus? : Shots - Health News Getting an accurate diagnosis is a big hurdle in the current outbreak of Zika virus. There are three kinds of tests for Zika, and each has problems. Scientists are working hard to improve diagnosis. 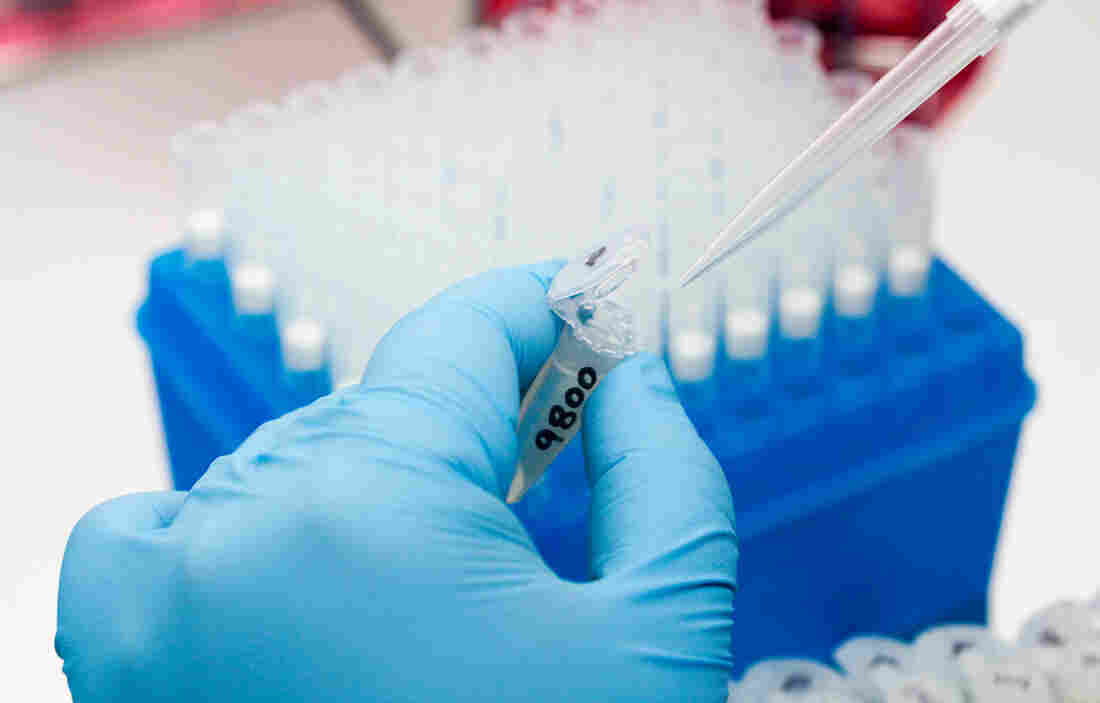 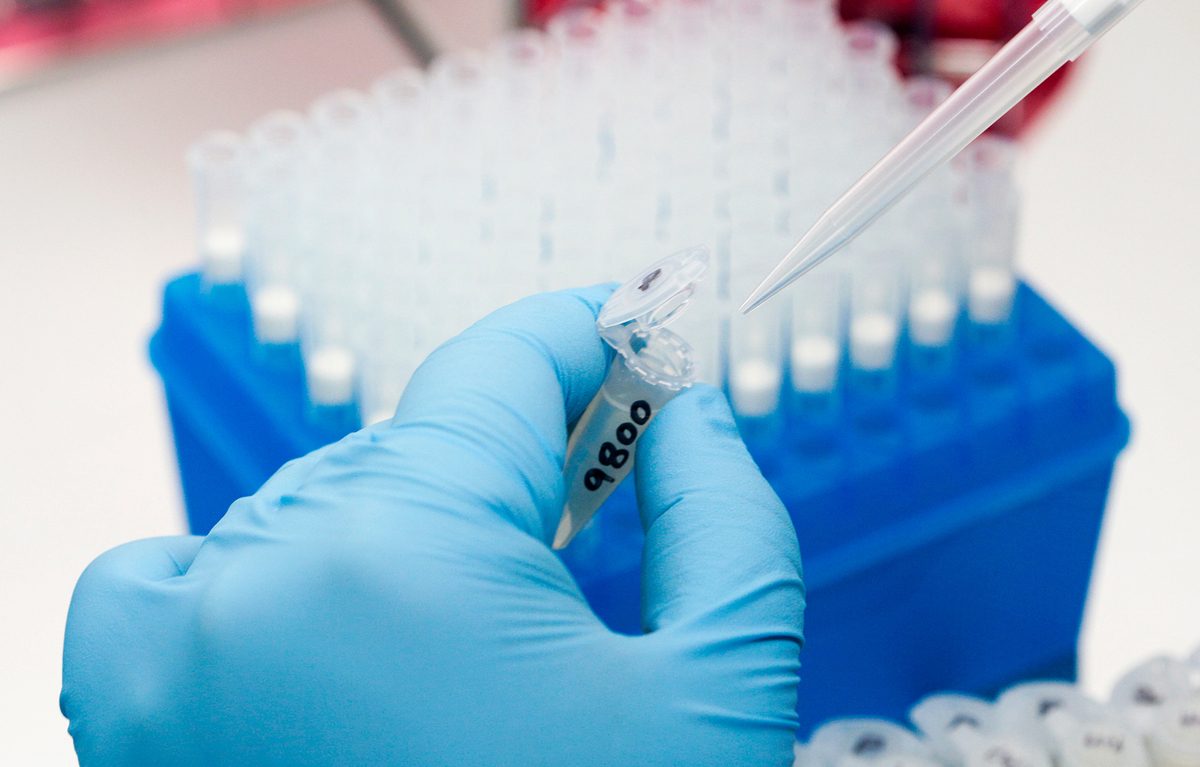 A medical researcher prepares tests for various diseases including Zika.

Let's say you're a pregnant woman who recently traveled to Latin America or the Caribbean. You got a little sick shortly after the trip, with some combination of mild fever, rash, joint pain and conjunctivitis. The big question now is: Did you have Zika virus? And, if so, is your fetus still healthy?

"Probably every day, patients come in questioning whether or not they would qualify for testing," says Dr. Christine Curry, an obstetrician-gynecologist at the University of Miami, and Jackson Memorial Hospital.

A preliminary study in Brazil makes a strong case for the link between Zika virus infection during pregnancy and a number of birth defects, including microcephaly. The infection has been associated with a range of outcomes in another study of nine U.S. women who caught the virus while traveling to regions where Zika is prevalent.

If a patient has a particular travel history, Curry sends a sample of the woman's blood to a lab for analysis. But it can take awhile for test results to come back, Curry says, and the waiting can be really stressful, especially for patients in the middle of a pregnancy.

There's another problem: Some tests aren't very reliable, so patients sometimes have to go through multiple rounds to confirm whether they had Zika. That puts Curry in a tricky situation when she's counseling patients.

"It involves saying 'I don't know' and 'no one knows' over and over again," she says.

Until recently, most samples of fluids from patients had to be sent to Atlanta for testing by the Centers for Disease Control and Prevention. Now, about 30 local public health labs are gearing up to do the analysis themselves, including the District of Columbia's department of forensic sciences, where Cleveland Weeden works as a medical technologist.

Most days, Weeden says, he feels like an athlete stuck on the bench. Outbreaks are exciting, in a way, because he finally gets to put his expertise and skills to work.

"We're the bench," Weeden says. "We get called into action when something goes on in the city."

A refrigerator behind Weeden holds plastic baggies with tubes of blood and urine from patients in the area. As of this week, his job is to test all these samples for Zika virus.

Weeden expects to get the results to patients within three days, rather than four weeks. He's running a procedure called RT-PCR — or Reverse Transcription-Polymerase Chain Reaction. The CDC is now making materials for 750 of these kits. Each kit has enough for 500 individual tests, which look for pieces of the virus' genetic material and answers "yes" or "no" to the question: "Is there virus in this person's blood?"

Weeden says the test is pretty straightforward — except for one thing.

"From the time the person is bitten [by an infected mosquito] to the time they get to the doctor, no more than five to seven days can pass for us to [be able to] pick it up on PCR," he says.

That means that if PCR is to work, doctors have to collect patients' blood within a week of the first signs of a fever and rash. The virus hangs around a little longer in urine, so doctors would have a slightly longer window of time — about two weeks — to collect those samples. But there's an extra complication, Curry says: Most patients don't rush to the doctor when their illness is mild.

"If someone had virus in their blood three weeks ago and they're now cleared, the PCR's not going to tell you that," she says. In that case, a negative result could mean either that the person never had Zika, or that their body had already cleared it from their system by the time they got tested.

That's why labs like Weeden's are trying to get hold of another kind of test that the CDC developed, which goes by yet another bulky acronym — the Zika MAC-ELISA. This test looks for a protein in a person's blood — a specific type of antibody — that shows what foreign things the body has fought off recently.

The Zika MAC-ELISA is widely seen as the best test available, right now, because it works over a longer time span than the first option. It's also faster and cheaper than another more definitive test, and requires less specialized training to perform. According to the CDC, Zika antibodies appear in the blood "starting 4 to 5 days after the start of illness and last for up to 12 weeks," or even longer in some people.

The CDC has produced about 100,000 of these test kits, and is offering them free to qualified labs. But there's one drawback: The test sometimes tells people they had Zika when they didn't.

An ideal test, all agree, would be specific to this particular virus and give a faster turnaround time — eliminating the need for the manpower, money and time required to go through the current layers of testing.

It's not just pregnant women who would benefit from a better test — so would patients who need blood transfusions in places like Puerto Rico, where health officials have been worried that patients might accidentally get Zika during transfusions with infected blood. So the officials have stopped accepting local donations and, instead, are now getting blood shipped in from the continental U.S.

The third, more definitive, test is called PRNT, or the plaque-reduction neutralization test. Because PRNT is expensive and takes at least a week longer to do than the Zika MAC-ELISA, the ELISA test is widely considered the more practical option in many cases.

"And herein lies where science needs to innovate a bit," says Ted Pierson, a virologist and senior investigator at the National Institute of Allergy and Infectious Diseases.

Sometime in December, Pierson and colleagues in his molecular virology lab dropped their work on dengue virus so they could press the pedal to the metal on Zika. Pierson's work doesn't focus on pregnant women or blood transfusions.

"I am focused on amino acids, hydroxyls and phosphates," he explains. His team is trying to figure out how to make a better version of the antibody test — the Zika MAC-ELISA test the CDC is distributing to labs.

"The problem here is actually quite simple," Pierson explains. Viruses in the same family — in Zika's case, the flaviviruses — can look similar on the outside, and the antibodies the human immune system uses to fight them can also be similar.

So, if a person had been infected sometime along the way with another mosquito-borne virus in that family, like dengue or West Nile — or even if they simply had been vaccinated against yellow fever — they could test positive in a Zika antibody test.

"It's a good example of where the devil is in the details," Pierson says, and those details are what he and his colleagues are delving into now.

"What we, as a field, need to do is develop antigens that allow us to distinguish between the antibodies specific to Zika, versus those for other flaviviruses," he says.

The group is essentially stripping down the virus to figure out what is unique to Zika — what distinguishes it from related viruses. The researchers are particularly interested in proteins, like the "fusion loop," that lie on top of the virus and help it enter a human cell. Once those unique parts are identified, it might be possible to create a more specific test that has much lower odds of triggering false positives.

That could take days to figure out — or months, Pierson says.

"You just can't predict," he says. "This is science. We just have to do the experiments."

In the meantime, people across the country who have jobs like Cleveland Weeden's will be working long days.

"You get physically tired," Weeden admits. "We're not robots. Your hands cramp up after you pipette so much. But that's what we're here for. We're public health scientists."

As the weather warms and mosquitoes start flying around, these scientists will keep on testing with — they hope — better and better tools.