Accessibility links
Tighter, Controversial Silica Rules Aimed At Saving Workers' Lungs : Shots - Health News Long known as a workplace hazard, silica dust can cause irreversible lung scarring and cancer. The Department of Labor expects its new limit to save about 600 lives a year. But industry is balking. 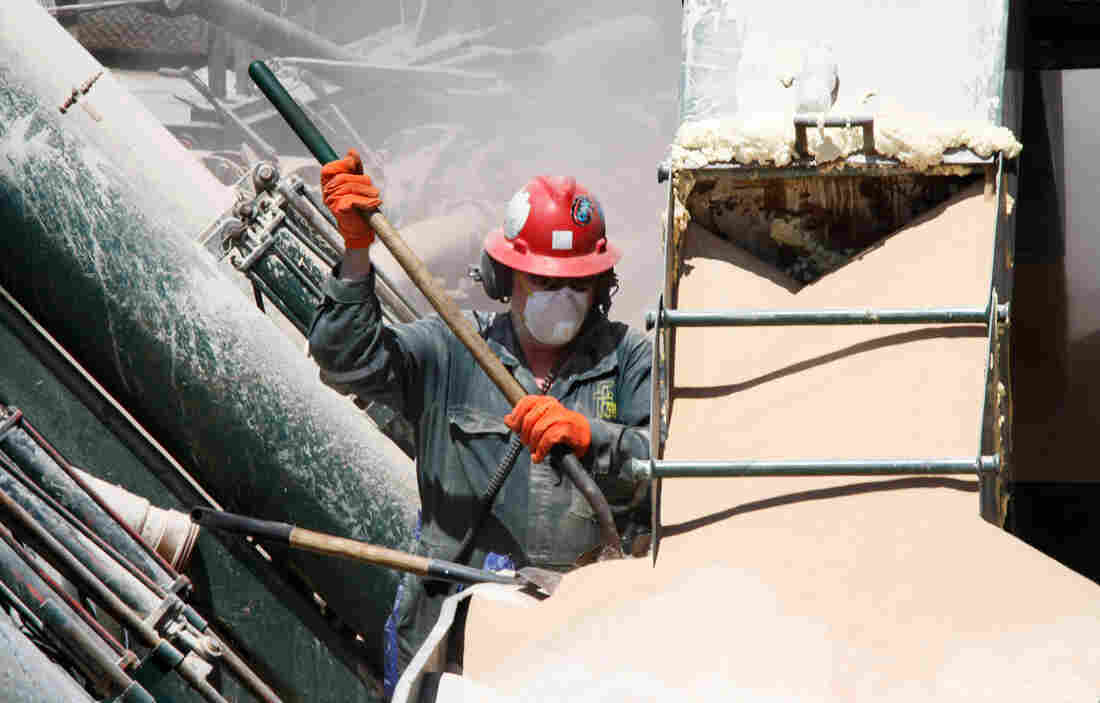 A worker in Claysville, Pa., shovels the fine powder that's part of a watery mixture used in hydraulic fracturing. Silica dust is created in a wide variety of construction and manufacturing industries, too. Keith Srakocic/AP hide caption 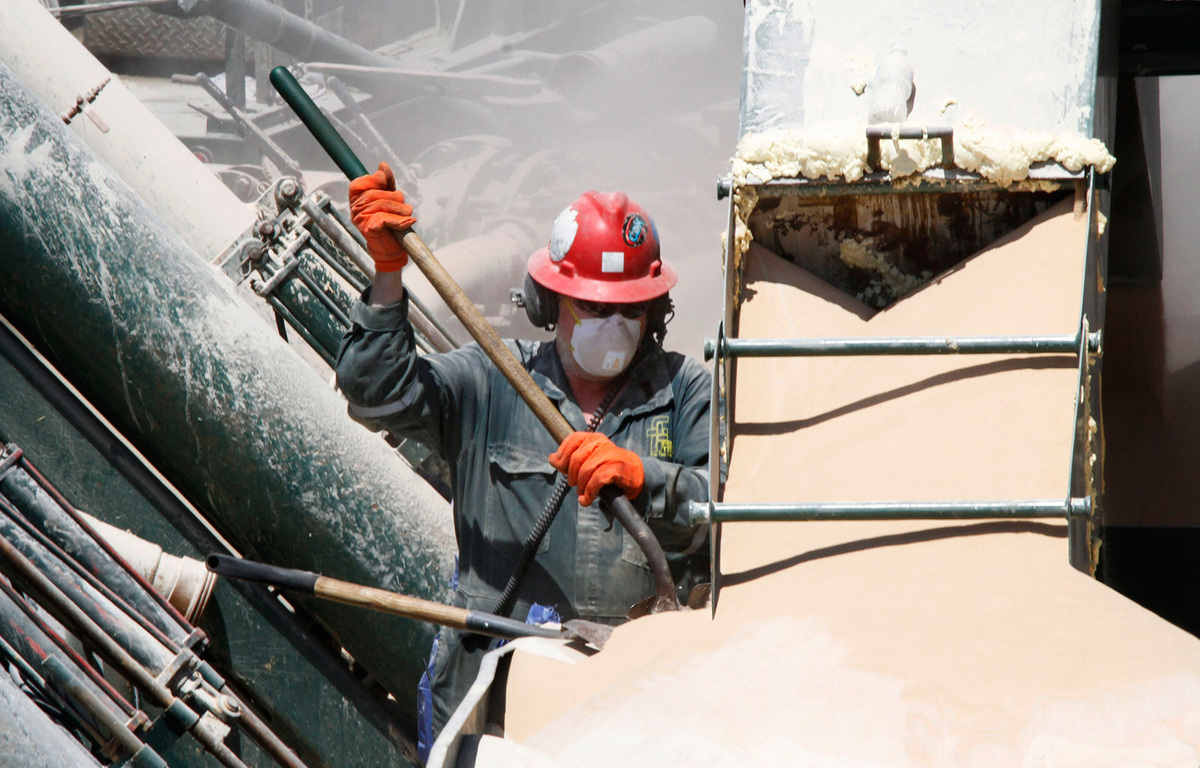 A worker in Claysville, Pa., shovels the fine powder that's part of a watery mixture used in hydraulic fracturing. Silica dust is created in a wide variety of construction and manufacturing industries, too.

The Department of Labor is issuing a long-awaited and controversial rule Thursday aimed at better protecting workers from inhaling silica dust.

The new rule dramatically reduces the allowed exposure limits for workers in a slew of industries, from construction to manufacturing to fracking.

About 2.3 million people in the U. S. are exposed to fine grains of silica on the job; inhaling the dust is one of the oldest known workplace hazards. Silica, which is basically sand, scars the lungs, causing diseases like silicosis and cancer.

Secretary of Labor Tom Perez says the existing rule that limits a worker's exposure to silica dust hasn't been changed since the early 1970s. And even back then, he adds, research showed the exposure limit didn't offer adequate protection.

"We've known for over 40 years that it needed to be strengthened, and it has taken 40 years to strengthen it," says Perez. "Many people who are going to work right now and breathing unacceptable levels of silica dust are in for a brighter future."

He says the current rule for construction sites caps exposure at 250 micrograms of silica per cubic meter of air.

"And the science says we need to be at 50," says Perez. "So that's what the final rule will say." That same updated exposure limit will apply to general industry as well, he adds, which will cut the current exposure limit in half.

Silica can be found in materials like concrete, brick and stone. Busting up those materials sends silica dust into the air. Workers can also get exposed in manufacturing industries that use sand, such as foundries.

Tom Ward, a brick and stone mason in Detroit, is strongly in favor of the new rule. His father died of silicosis after doing sandblasting at his job.

"We watched my dad basically suffocate," Ward recalls, adding that when he first started working, he didn't realize his saws and grinders also exposed him to silica dust. 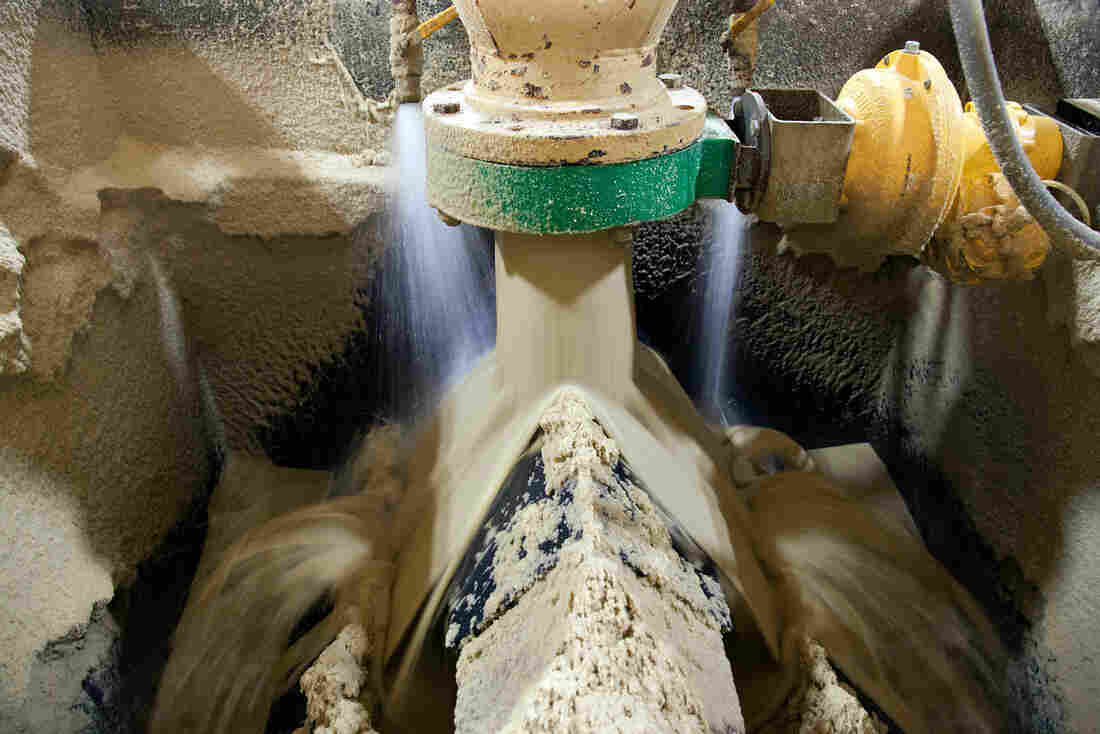 A slurry of cleaned silica sand flows into the wash plant, where it is washed in preparation for storage at the Wisconsin Industrial Sand Co.'s Maiden Rock facility in Maiden Rock, Wis. Ariana Lindquist/Bloomberg via Getty Images hide caption 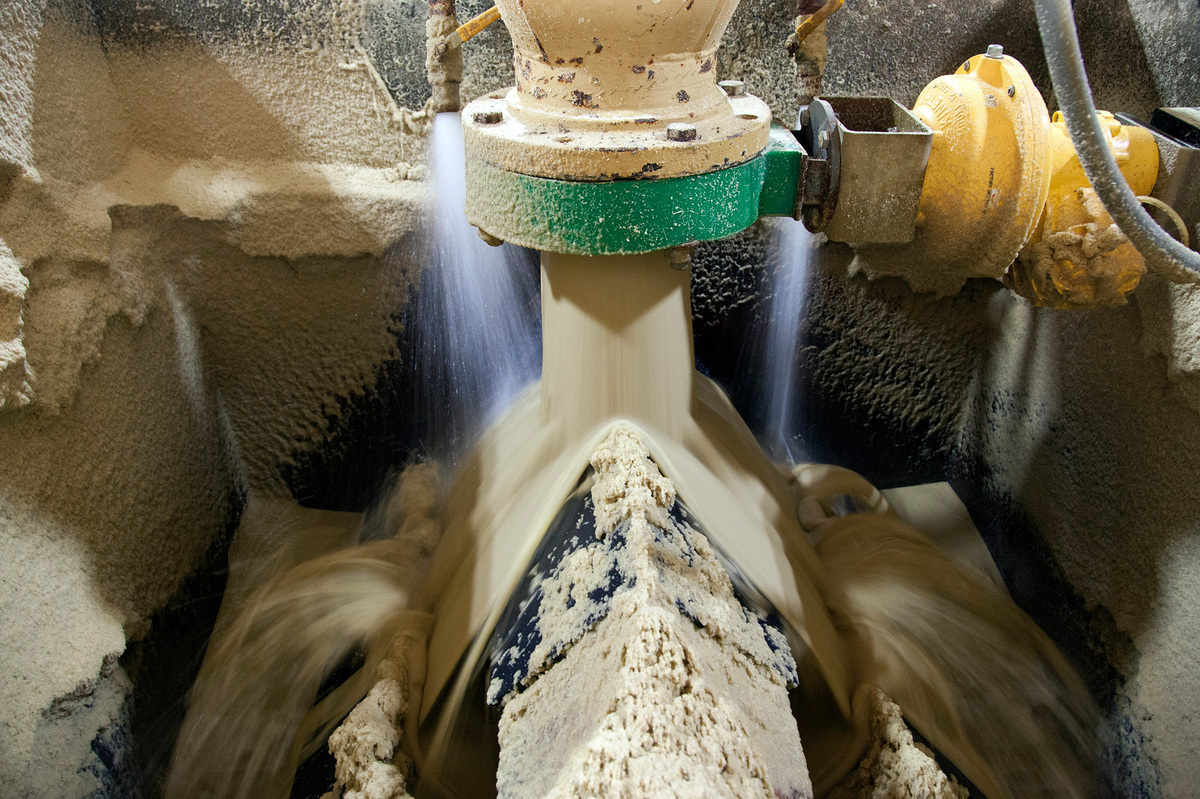 A slurry of cleaned silica sand flows into the wash plant, where it is washed in preparation for storage at the Wisconsin Industrial Sand Co.'s Maiden Rock facility in Maiden Rock, Wis.

He now worries about what he breathed in, and says he's troubled whenever he passes a construction site and sees workers in a cloud of dust.

"They have no idea that they're slowly poisoning themselves over their careers," Ward says.

Under the new rule, employers will have from one to five years to put protections in place, depending on the industry.

"We're estimating that once it's fully in effect it will save about 600 lives a year," says David Michaels, the head of the Department of Labor's safety agency, the Occupational Safety and Health Administration (OSHA). The rule is also expected to prevent more than 900 cases of silicosis each year, Michaels says.

"Silica is a killer and employers need to take the necessary steps so that they can reduce exposure," says Perez. "And the good news is that those necessary steps are not going to break the bank. It's real simple stuff. Get a vacuum. Get water. Those are the key elements of pretty simple compliance."

Before issuing this rule, the government held weeks of hearings, took comments from thousands of stakeholders and did all kinds of analyses that took years, says Michaels, who notes that "we have to show that the rule will be economically and technologically feasible for every industry that we cover."

But a lot of industry groups disagree with that assessment and have fought against the new rule.

Brian Turmail, a spokesman for the Associated General Contractors of America, says if a dust-producing part of a construction site has to be cordoned off and put off-limits to all workers except those in protective gear, "you would delay or lengthen the time it takes to complete projects. And certainly the cost of building any type of construction project — because virtually every type of construction project is going to create dust — will go up significantly."

He thinks officials should have focused on better enforcement of the existing exposure limits.

That point is echoed by Neil King, the outside counsel to the American Chemistry Council's Crystalline Silica Panel. "OSHA's own inspectors, when they conduct inspections, have been finding — year after year — that in more than 30 percent of the cases, the existing permissible exposure limit is exceeded," says King.

If industries consistently complied with existing limits, he says, "the number of silicosis cases, which has already fallen by 90 percent, would basically fall to zero or something very close to zero."

Others say that the administration has underestimated what it will cost businesses to comply with the new rule. Amanda Wood, director of employment policy for the National Association of Manufacturers, notes that OSHA says the cost will be hundreds of millions of dollars. "Based on our estimates, we know that the true cost will be more in the billions," Wood says.

She says her organization will consider all of its options in preparing a response, including turning to Congress or the courts for assistance.