Accessibility links
Tiny Opioid Patients Need Help Easing Into Life : Shots - Health News More babies are being born dependent on opioids. The good news is they can safely be weaned from the drug. But there is little research on which medical treatment is best, or on the long-term effects. 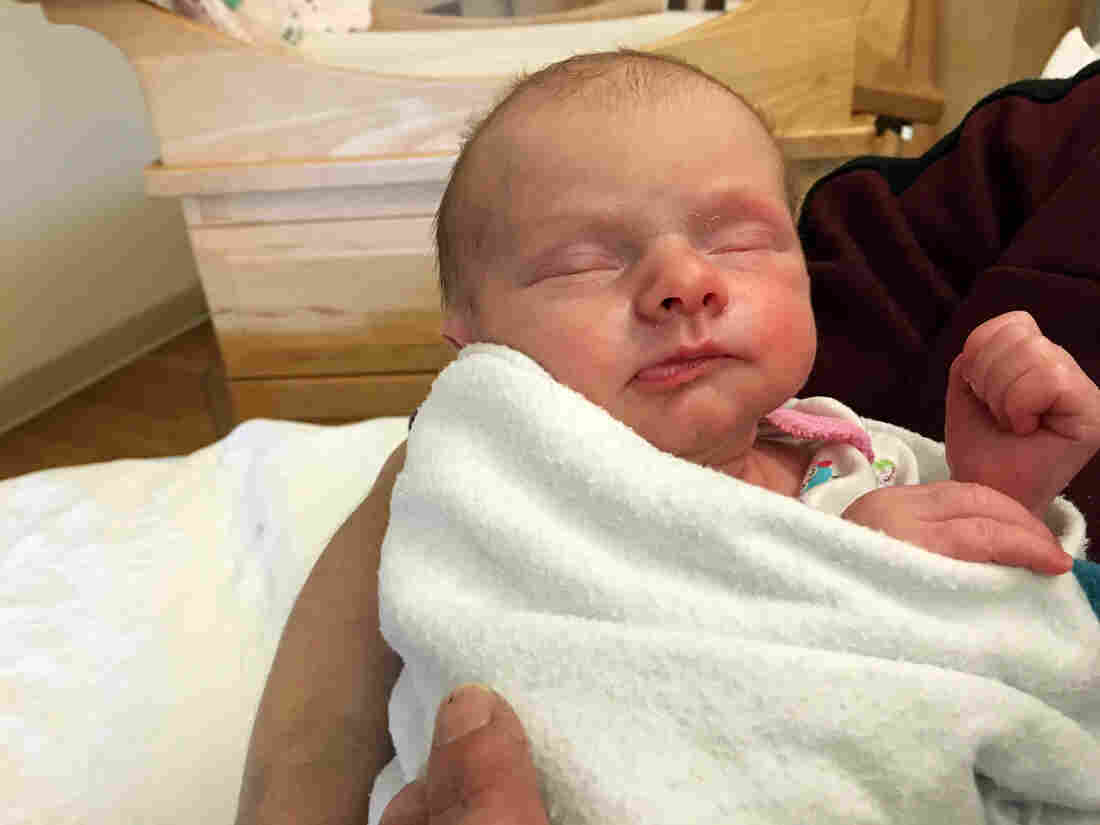 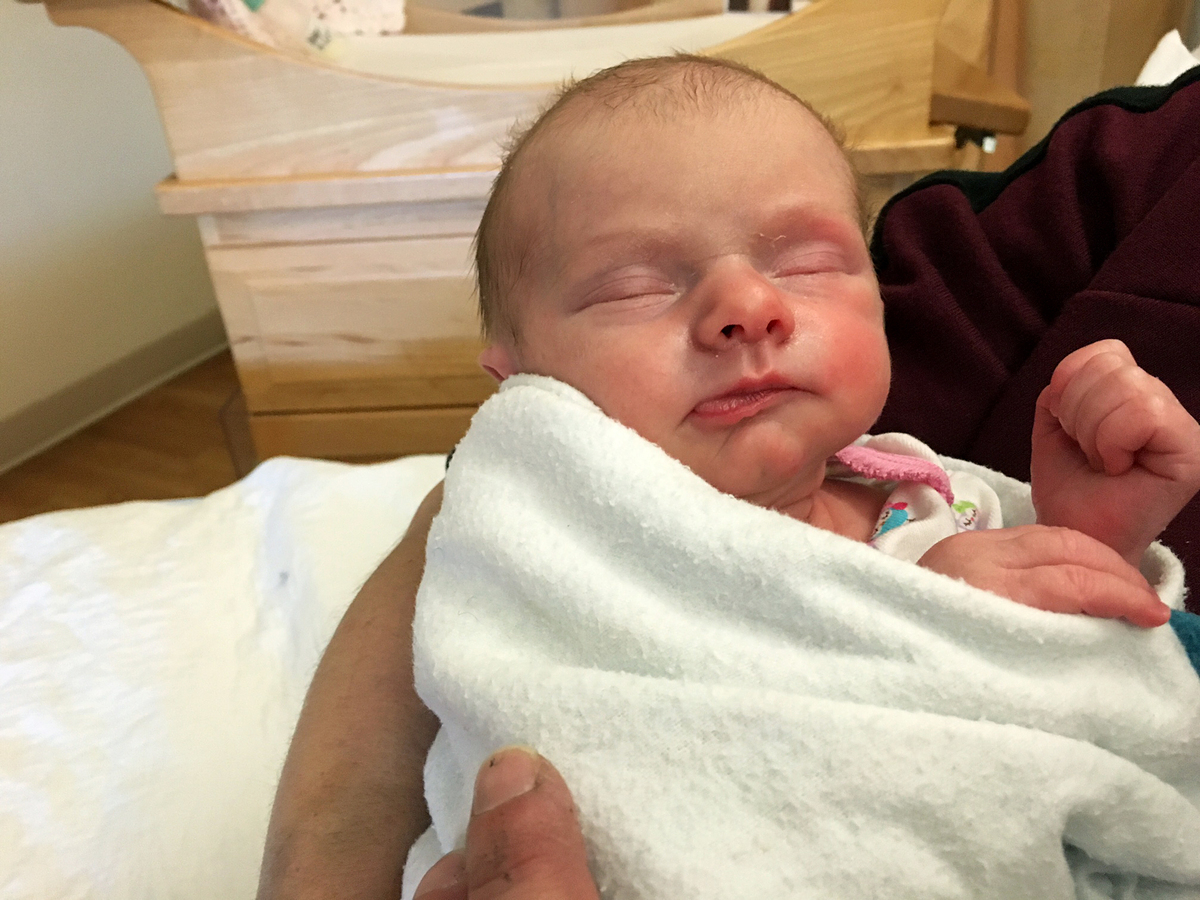 Doctors are trying to slowly wean Lexi from her dependence on methadone. She's just 2 weeks old. Under a doctor's advice, her mom took methadone while pregnant, to help kick a heroin habit.

Swaddled in soft hospital blankets, Lexi is 2 weeks old and weighs 6 pounds. She's been at Women and Infants Hospital in Providence, R.I., since she was born, and is experiencing symptoms of opioid withdrawal. Her mother took methadone to wean herself from heroin when she got pregnant, just as doctors advised. But now the hospital team has to wean newborn Lexi from the methadone.

As rates of opioid addiction have continued to climb in the U.S., the number of babies born with neonatal abstinence syndrome has gone up, too — by five-fold from 2000 to 2012, according to the National Institute of Drug Abuse.

It can be a painful way to enter the world, abruptly cut off from the powerful drug in the mother's system. The baby is usually born with some level of circulating opioids. As drug levels decline in the first 72 hours, various withdrawal symptoms may appear — such as trembling, vomiting, diarrhea or seizures.

At some point, if symptoms mount in number or severity, doctors will begin giving medication to help ease them. The idea is to give the baby just enough opioid to reduce those symptoms, and then slowly, over days or weeks, decrease that dose to zero.

A doctor comes to check on Lexi and her mother, Carrie. To protect her family's privacy, Carrie asked us not to use the family name.

"So, hi, Peanut!" the doctor says to the baby. "Any concerns?" she asks Carrie.

"Coming down has been catching up with her," says Carrie.

"Do you feel like she's jittery?" the doctor asks. 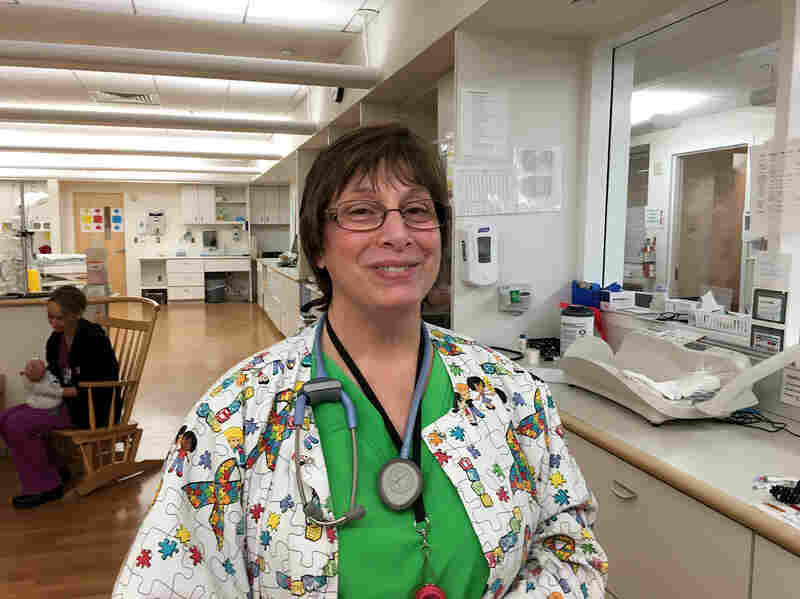 "She didn't want to be put down last night — like [she had] the shakes," Carrie says.

Lexi has neonatal abstinence syndrome, and has been getting methadone treatments for it. She is getting better — most babies do — but even with treatment, she's had tremors, diarrhea, and she's cried and cried. Her little arms and legs tighten up, her fingers and toes clenched. She's been feverish, her mother says.

"I know what she's feeling," Carrie says. "And that is the worst part."

Carrie was addicted to heroin herself and knows withdrawal is miserable. She's been off heroin — with help from methadone — since she found out she was pregnant, she says. The small dose of methadone keeps a low level of opioid in her system so she doesn't go into withdrawal, but it doesn't get her high. For Carrie and thousands like her, methadone is a lifesaver — helping them quit a heroin or oxycodone or other opioid habit for good.

But getting pregnant posed a dilemma: If Carrie stopped taking opioids altogether, she risked relapse or miscarriage. Yet, if she continued to take any opioid — including methadone — there would be a 60 to 80 percent chance that her baby would be born with neonatal abstinence syndrome, the doctors told her.

Babies going through withdrawal spend weeks — even months — in hospital nurseries like this one.

"Their cry is very different," says Cindy Robin, a registered nurse at the Providence hospital, who has been caring for mothers and newborns for more than 30 years. "It's a more distressed cry," she says, "and it really pulls at your heartstrings to have to listen to them."

Robin says babies with mild symptoms of the withdrawal syndrome will sneeze and sniffle. They have trouble settling down. Babies who have a more severe case can have seizures and dangerously high fevers. Robin says nurses have to dim the lights, and swaddle the newborns tightly to help keep them calm.

"They just need to be held in a nice, quiet spot," she says. "We have nice quiet music playing, and try to keep them as comfortable as possible."

Nurses with special training check on the babies every couple of hours.

"So these are the things that we look for ... and what we teach the parents," she says: "Is the baby crying excessively? Is it a high pitched cry? Is it just a continuous cry? How do they sleep after they eat?"

Medication, which is gradually decreased, can help ease this constellation of symptoms.

"The American Academy of Pediatrics and others recommend an opioid for the babies, because you're giving them back what they're withdrawing from," explains Dr. Jonathan Davis, a neonatologist and chief of newborn medicine at Tufts' Medical Center. "Morphine and methadone are the two most common."

But Davis says no one's really done the research to figure out which drug works better for babies, and doctors are left to figure that out by trial and error, case by case. Though the Food and Drug Administration hasn't officially approved morphine or methadone for use in newborns, doctors prescribe these drugs to the children anyway, in smaller doses than they give adults.

"As I spoke to people around the country, everyone would have their own approach and a very different way of treating these babies," Davis says. "And we thought that quite odd."

So he and a colleague, Brown University developmental psychologist Barry Lester, have launched a major study to sort out what works best. The two are hoping to enroll 180 babies in their double-blind, randomized, controlled trial — no one will know which newborns are getting methadone, and which are getting morphine, for example, until the study's end. And they're taking the research further: No study yet has looked at the long-term effects of the drugs, so Davis and Lester will continue to follow-up with measures of cognitive and physical development until the children are 18 months old.

"It may be," Davis says, "that one agent is safer short-term, but when we look longer-term it may actually be more dangerous." Teasing out long-term effects of a drug isn't easy, Lester says; many factors can influence a baby's development.

"If you're drug-exposed and you're growing up in an inadequate environment — which may not be poverty, it may be inadequate parenting — that's a double whammy," he says. "Those are going to be your worst case scenarios."

Despite many remaining unknowns, doctors have consistently found that treatment with morphine or methadone enables most babies to get through withdrawal in about six to eight weeks.

"It can be heartbreaking," says Robin, who has helped shepherd many kids through dark days. "But at the end, it is also rewarding," she says, "because you see them get better and you see them go home."