Accessibility links
Pregnant And Addicted: The Tough Road To Family Health : Shots - Health News Guilt still haunts a new mother who was addicted to opioids when she got pregnant. Once she was ready to ask for help, treatment programs that could handle her complicated pregnancy were hard to find. 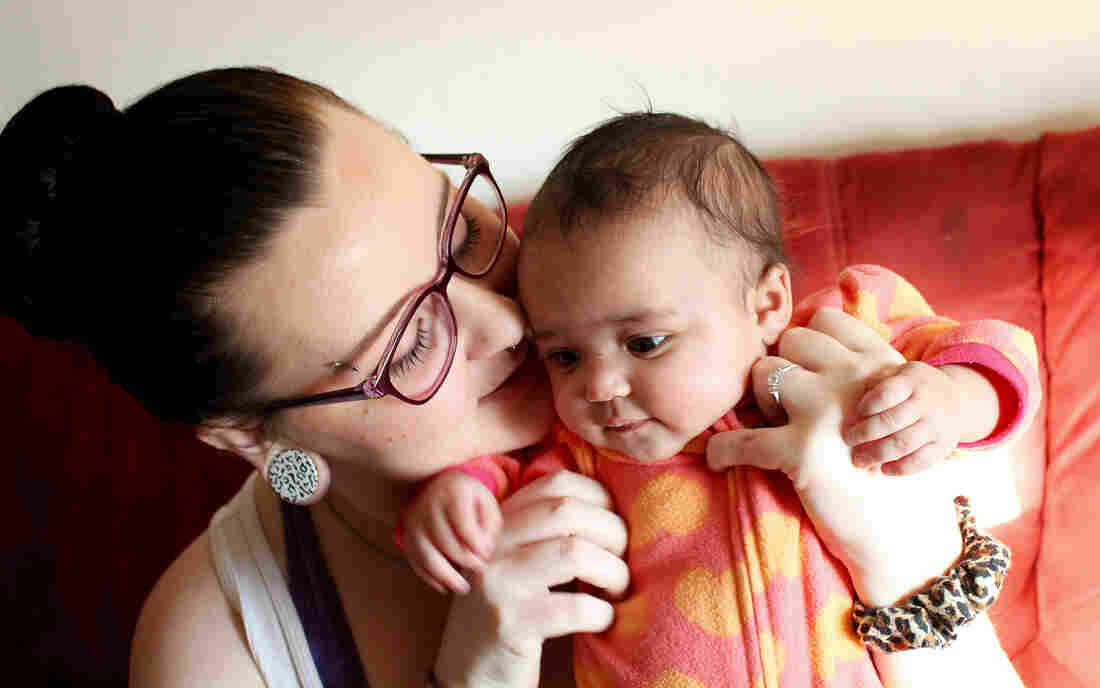 Amanda Hensley with her daughter, Valencia. Hensley says several hospitals and clinics she contacted were reluctant to help her quit her opioid habit. "Nobody wants to touch a pregnant woman with an addiction issue." Sarah Jane Tribble/WCPN hide caption 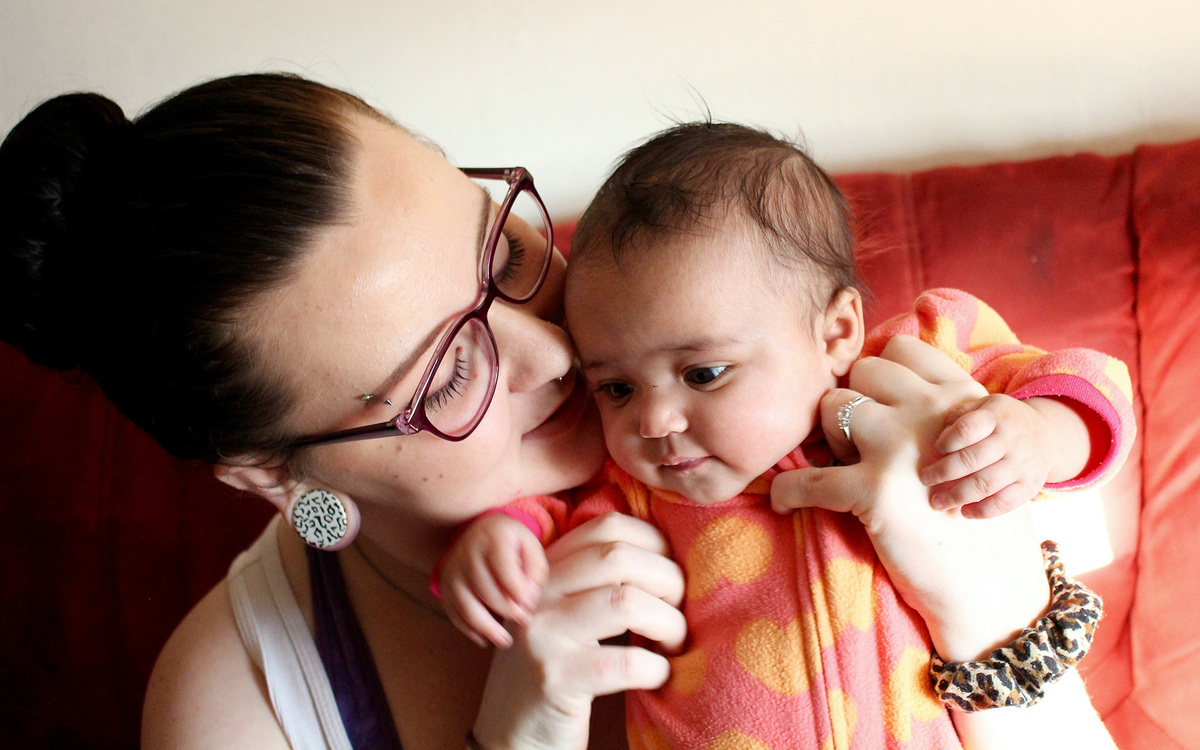 Amanda Hensley with her daughter, Valencia. Hensley says several hospitals and clinics she contacted were reluctant to help her quit her opioid habit. "Nobody wants to touch a pregnant woman with an addiction issue."

Amanda Hensley started abusing prescription painkillers when she was just a teenager. For years, she managed to function and hold down jobs. She even quit opioids for a while when she was pregnant with her now 4-year-old son. But she relapsed.

Hensley says she preferred drugs like Percocet and morphine, but opted for heroin when she was short on cash.

By the time she discovered she was pregnant last year, she couldn't quit.

Hensley says she was ashamed and hurt, and she wanted to stop using but didn't know how. She had friends who would help her find drugs — even after they found out she was pregnant.

Finding help to get clean and protect her child proved much more difficult.

By the time Hensley was about six months pregnant, she was living on couches, estranged from her mother and her baby's father, Tyrell Shepherd. Her son went to live with her mother.

That's when Hensley reached out for help. One moment, she dialed to get her fix. The next, she called hospitals and clinics.

"Nobody wants to touch a pregnant woman with an addiction issue," she says.

Shepherd wasn't happy when he realized Hensley was taking opioids while pregnant. "If you don't care about yourself," he says, "have enough common decency to care about the baby you're carrying. Be adult. Own up to what it is you're doing and take care of business. Regardless of how bad you're going to feel, there's a baby that didn't ask to be there."

After she was rejected by two hospitals and several clinics, Hensley let herself go into withdrawal and then went to the emergency department of MetroHealth System, Cleveland's safety-net hospital.

Under the auspices of a state-supported program, Hensley was prescribed Subutex — an opioid-replacement drug that has helped her recover. 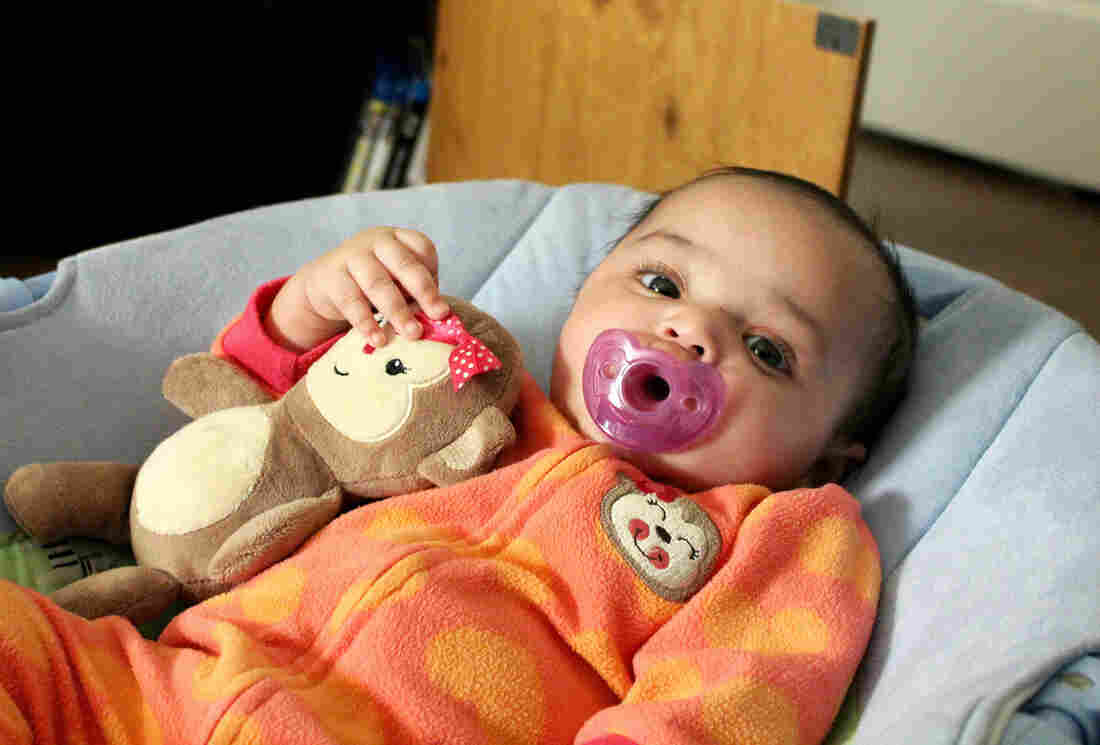 Valencia Shepherd (shown here at 3 months) is now 6 months old — healthy and safely weaned from opioids. Her mom has been clean of the drugs for nine months. Sarah Jane Tribble/WCPN hide caption 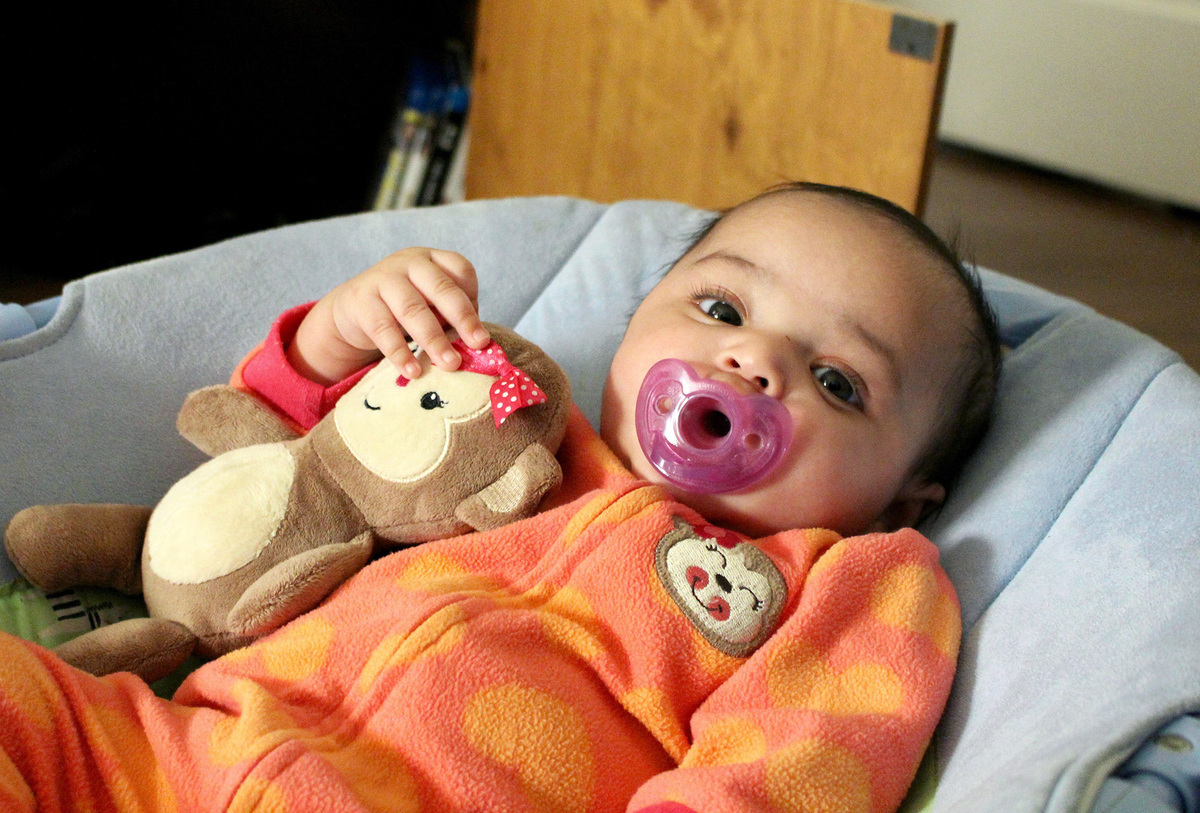 Valencia Shepherd (shown here at 3 months) is now 6 months old — healthy and safely weaned from opioids. Her mom has been clean of the drugs for nine months.

Her baby girl, Valencia, was born three months later. Mom and baby had their own room at the hospital, where nurses encouraged snuggling and breastfeeding. The nurses were also on hand to drop liquid morphine into Valencia's mouth if needed. The baby, too, had to be slowly weaned off of opioids.

Hensley cries as she remembers those early days: "She wouldn't latch on — we couldn't get her to feed. I couldn't get her to stop crying. She was very fussy, and I realized, I did that to her. I took her choice away. And that's one thing I still need to work through, because I haven't forgiven myself for that."

Hensley hasn't used opioids in nine months, and Valencia is now about 6 months old. She has chubby baby cheeks and clear brown eyes as big as saucers.

During a recent visit, Valencia kept cooing and smiling — especially when her mother was nearby.

It's been a journey. Hensley says only within the past few months has she stopped having dreams about using opioids.

Most physicians who specialize in addiction treatment agree that Hensley and her baby received the appropriate care. According to the American Congress of Obstetricians and Gynecologists, women who are pregnant should have medically assisted therapy that at least temporarily replaces the opioids they are using with drugs that are more stable, like methadone. Withdrawal should be discouraged during pregnancy if medically assisted therapy is available.

Quitting opioids cold turkey is dangerous for the infant and could increase the risk of preterm labor or fetal death.

"I think it's time for us to reshape how we view addiction in the United States," he says. "It is a medical condition — it is not a moral failing."

Patrick has seen firsthand how difficult it is for women to find this medical help. At Vanderbilt and in other communities he has visited around the U.S., he says, he's seen women travel for hours to receive treatments for opioid-use disorder. It's particularly a problem in rural communities.

Dr. Jennifer Bailit, at MetroHealth, directs the mother's program that helped Hensley, and was Hensley's obstetrician. It's a tough problem to tackle, Bailit says.

"These are difficult patients. They are complicated and they have complex social needs," Bailit says. "Many practitioners are just not equipped to deal with the breadth and depth of the kind of issues that come with them."

In the past few years, MetroHealth has become a go-to place for pregnant women in Northeast Ohio, treating more and more patients. The hospital cared for a handful of pregnant women with opioid addiction in 2002. Last year, it saw 160 women, and many of them traveled some distance to reach the facility.

In addition to the sort of opioid replacement therapy that Hensley received, the hospital has a whole package of services to support mothers before and after the baby is born. The hospital assigned Hensley a social worker, and set her up with intense outpatient therapy — three days a week for six months. Hensley still checks in with a doctor at the hospital once a month to get her medications.

The support has helped the whole family recover. Valencia is hitting all her developmental milestones — like rolling over. And Shepherd has really taken to being a dad, regularly feeding the baby, changing diapers and creating silly noises to make her laugh.

Hensley and Shepherd have picked out their wedding rings and have begun discussing where to have the ceremony. Hensley has also gone back to cosmetology school, and the couple is talking about when they can bring Hensley's older son home.