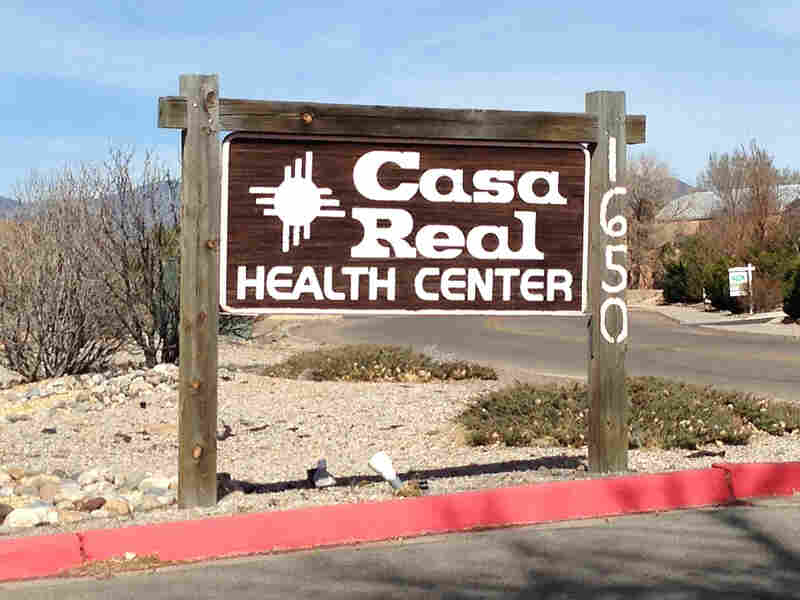 State attorneys allege that the Casa Real Health Center, a Santa Fe nursing home, is one of seven facilities that billed Medicaid and private insurers for services they couldn't have delivered, given their low staffing levels. Ina Jaffe/NPR hide caption 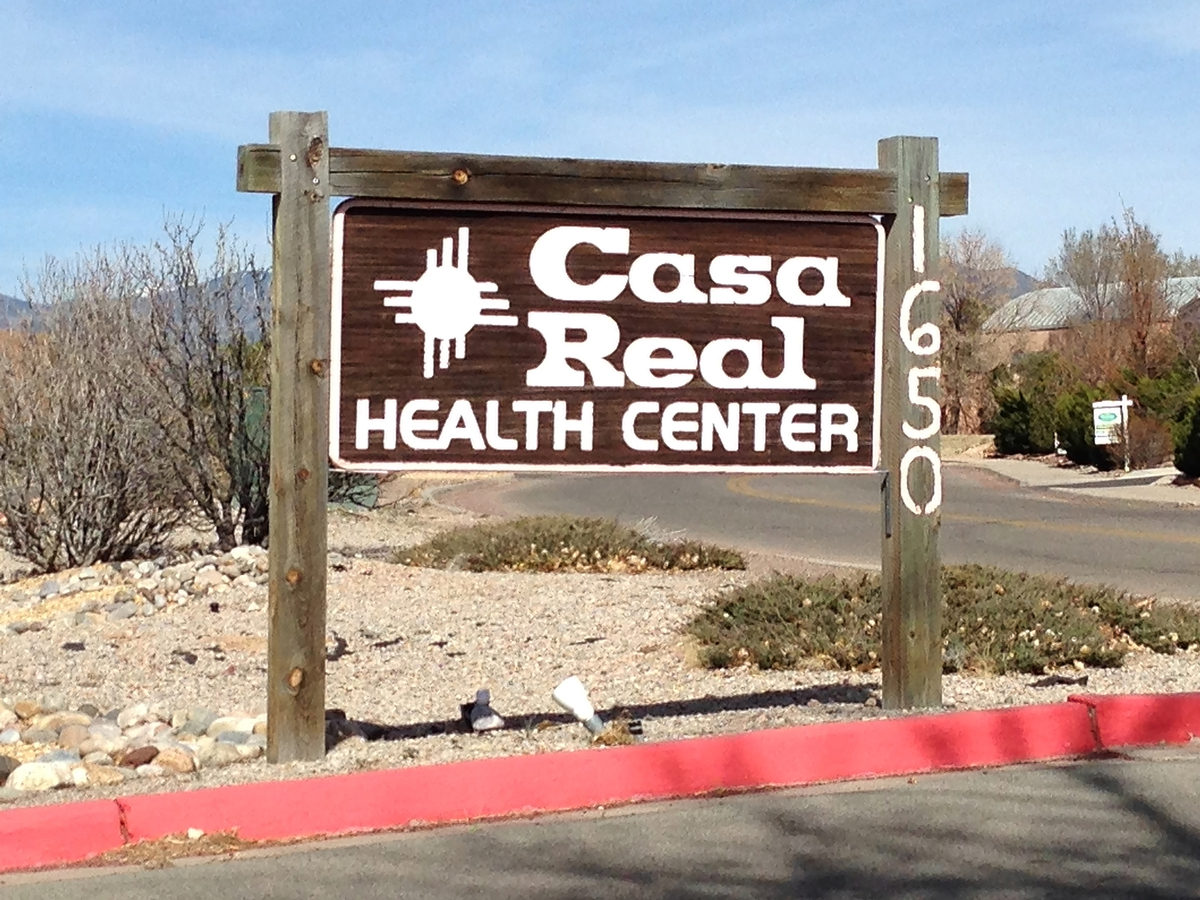 State attorneys allege that the Casa Real Health Center, a Santa Fe nursing home, is one of seven facilities that billed Medicaid and private insurers for services they couldn't have delivered, given their low staffing levels.

One of the keys to providing good care in nursing homes is simply having enough staff. The federal government says about a quarter of all nursing home complaints can be traced back to low staffing levels. And studies have connected low staff levels to lousy treatment. The state of New Mexico connects it to fraud.

The state's Attorney General is suing a chain of nursing homes, alleging that the facilities were so severely under-staffed, they couldn't possibly have provided the care they charged for. Now New Mexico wants its money back.

Lino Lucero is "confidential witness #1" in the lawsuit. In 2007 he and his wife Linda made the tough decision to send Linda's mother, Polly Duran, to a nursing home. Alzheimer's continued to tighten its grip on Duran, and they'd done everything they could for her at home.

"It got to the point where it was making my wife sick trying to deal 24 hours a day with her," says Lucero.

So he and his wife brought his mother-in-law to a nursing home in Santa Fe called Casa Real. They visited frequently, sometimes daily. There were always appalling discoveries.

Lucero almost apologizes for describing the conditions there. "Not to be a distasteful person," he says, "but the smell and the stench... not only from her, but from the other residents that were there, was horrible and deplorable. You'd walk in and you'd wish you had a mask."

Linda Lucero frequently cleaned her mother up and changed her sheets. The Luceros also noticed that Duran was losing weight and growing frail. Even though the doctor had told the staff that Duran needed to have her food cut into bite-size pieces, they did not always do so. So sometimes, she didn't eat.

The last straw was when the Luceros got a call from a hospital in Santa Fe. The doctor on the phone said that Duran had just been admitted.

It turned out she'd broken her hip. Lucero says the physician told him that "it's severely broken and it looks like it's been broken for more than three or four days."

The Luceros never found out how Duran broke her hip or why it took the staff at Casa Real three days to do something about it. She never walked again and died several months later.

Her experience is the reason that Lino Lucero decided to become a witness in New Mexico's lawsuit against Cathedral Rock, the corporation that owned the nursing home then, and Preferred Care Partners Management Group, which owns it now.

"These are companies that profited and made hundreds and hundreds of millions of dollars in revenue," about 80 percent of which came from the state of New Mexico in the form of Medicaid payments, says Hector Balderas, New Mexico's attorney general.

In addition to Casa Real, there are six more nursing homes owned by Preferred Care Partners Management Group that are targets of this suit. "We're trying to recover dollars back for the taxpayers of New Mexico," says Balderas. The state is also trying to recover funds on behalf of private-pay residents.

But Balderas says that, more than money, the lawsuit is about the elderly and disabled residents of nursing homes "who suffered unnecessarily, sitting there in their own feces, sitting there in urine, developing bed sores. And some of this lack of care even resulted in death."

So far, there are 31 confidential witnesses in this case — former nursing home employees as well as families like the Luceros. But what makes New Mexico's suit novel, isn't the personal accounts. It's the data the state gathered to support its argument .

State attorneys used time and motion studies – a concept borrowed from industrial engineering — that show how long it takes health care staffers to do individual tasks. They focused on activities considered "basic care," such as bathing, feeding, and turning residents so that they don't get bed sores.

There's already an established legal standard of care in New Mexico, says Mann. It's 2 ½ hours of nursing care per resident per day, on average.

Balderas counters that simply following regulations is not enough.

"Those are minimal standards, just a basic floor. They should be doing everything they can to make sure that the health, safety and welfare of these residents is met," says Balderas, echoing the federal standards for nursing homes.

Deborah Mann also objects to the role of private attorneys in this lawsuit. The firm of Cohen Milstein, based in Washington, D.C., approached Balderas' predecessor in the New Mexico Attorney General's office, Gary King, with the idea of filing a suit against nursing homes for insufficient staffing.

"We don't know how it turned into something against our clients," Mann says, calling the whole arrangement "inappropriate."

Balderas says that while he didn't originate the case, he decided to pursue it "because it ties directly to our mission in protecting vulnerable populations and families in New Mexico." Meanwhile, his office can rely on the resources of Cohen Milstein attorneys, paralegals, and investigators, who only see a big payday if the state wins the case.

Attorneys for the other defendant, Cathedral Rock, declined to comment to NPR. But that company previously settled federal civil and criminal complaints for negligence and fraud in its Missouri nursing homes, paying more than $1.6 million in fines. As for Preferred Care Partners Management Group, all but one of their nursing homes targeted in this suit have received bad grades on a federal site that rates nursing homes.

Now, years after Polly Duran's death, her son-in-law still wants the nursing home held accountable for the way it treated her.

It's amazing, he says, that you can put your trust in the nursing home to care for someone you love and then, through neglect and abuse, "their spirit is completely broken and lost."

The pain of witnessing that happen to Polly Duran, Lucero says, will stay with him for life.