Accessibility links
Theater Helps This HIV-Positive Grandmother Transform Lives : Shots - Health News Writing her own story, with support from peers, helped Cassandra Steptoe shed the shame she felt in her diagnosis and find psychological healing instead. Now she's inspiring others to do the same. 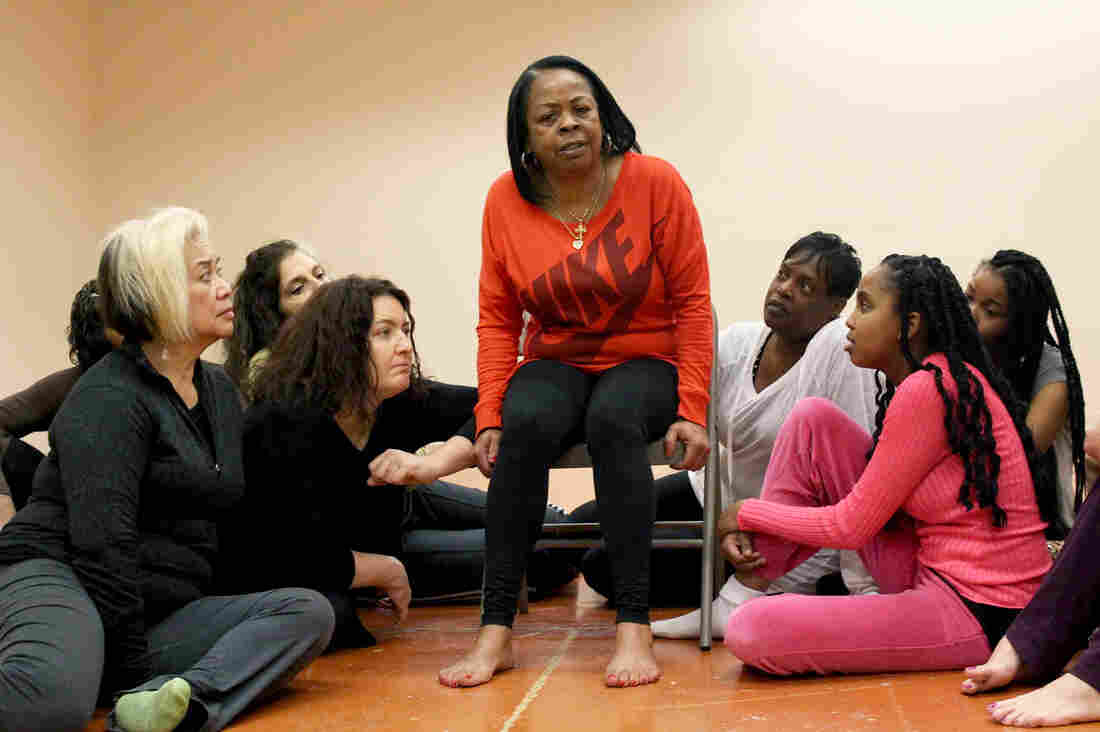 Cassandra Steptoe (center) rehearses a performance with fellow actresses as part of The Medea Project, in San Francisco. Steptoe wrote and performs an autobiographical monologue in the production about being HIV-positive. Farida Jhabvala Romero/KQED hide caption 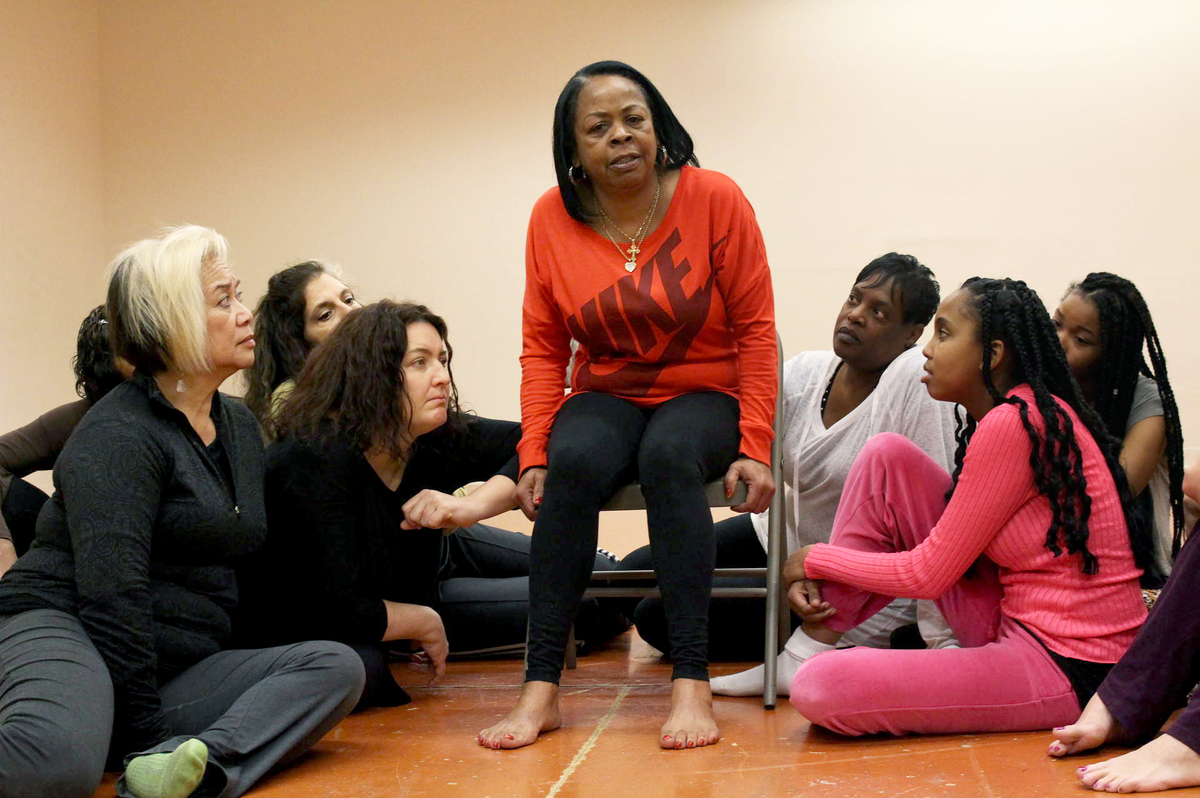 Cassandra Steptoe (center) rehearses a performance with fellow actresses as part of The Medea Project, in San Francisco. Steptoe wrote and performs an autobiographical monologue in the production about being HIV-positive.

For decades, Cassandra Steptoe felt like she couldn't talk about her HIV diagnosis with anyone.

"I couldn't forgive myself for getting HIV," says Steptoe, who spent much of her early adult life in and out of jail for shoplifting and burglaries linked to her IV drug use. "But someone told me a long time ago, if you are looking for a reason to feel shame, you can always find it. I learned to look for something else: forgiveness."

It wasn't until Steptoe, now 59 and a grandmother, was in her 40s that she finally completed a drug rehab program and committed to ongoing HIV treatment.

Today she talks openly about that experience onstage, as part of a theater project aimed at inspiring others. The quote about learning to forgive herself is part of an autobiographical monologue Steptoe wrote and performs in a San Francisco theater production of The Medea Project: Theater for Incarcerated Women/HIV Circle.

It was Steptoe's physician, Dr. Edward Machtinger, who first told her about the project. Established by playwright and director Rhodessa Jones in 2008 as an extension of an improvisational production that draws on and explores the experiences of jailed women, the "HIV Circle" focuses on the experiences of women living with the AIDS virus.

The therapeutic aspect of the performance workshop is called peer empowerment, explains Machtinger, an internist and director of the Women's HIV Program at the University of California, San Francisco. The strength and healing Steptoe and others have gained from processing and sharing their stories this way is profound, he says — and can serve as a model for helping other patients deal with psychological trauma. 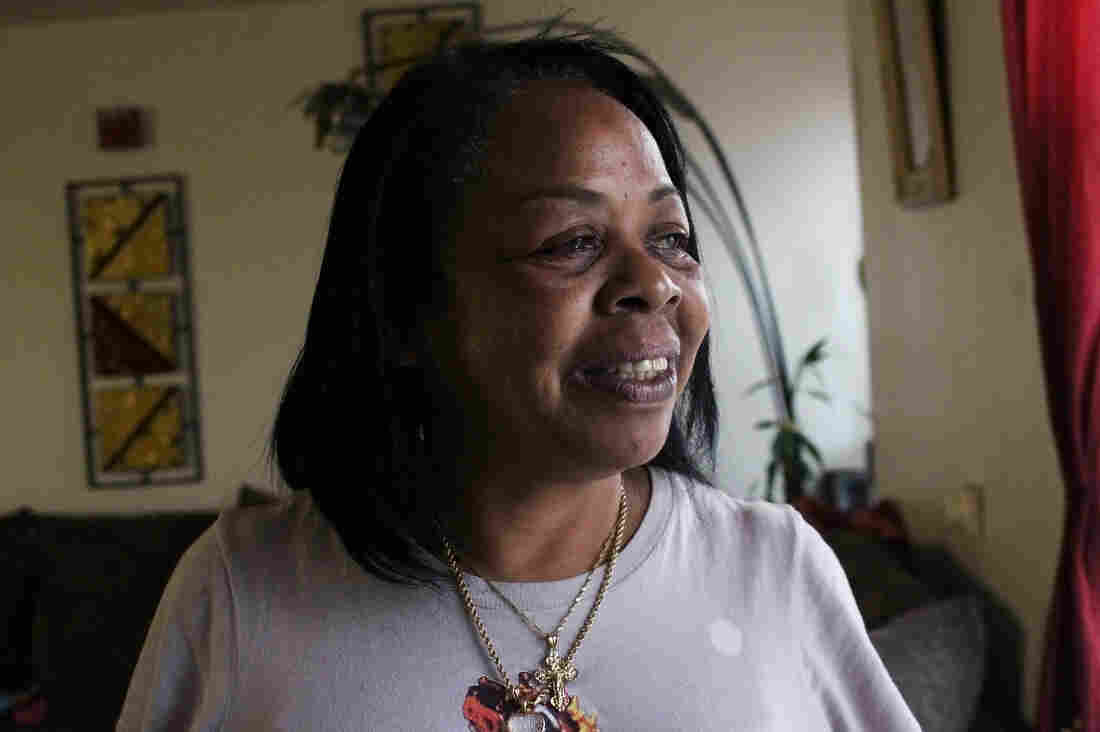 Cassandra Steptoe in the home she shares with her 8-year-old granddaughter in San Francisco. Steptoe credits The Medea Project with helping her overcome the trauma of childhood abuse. Farida Jhabvala Romero/KQED hide caption

With the theater group, Steptoe began writing about her experiences and sharing them with a small group of women, some of whom had gone through similar struggles of addiction and histories of incarceration. She says the process of uncovering her past and making sense of her experiences in a cathartic, supportive environment helped end her feelings of isolation.

"Having these women that really love you and support you ... it feels good to have some real friends, 'cause I never had that before," Steptoe says. "We're all sharing something together ... we all get something out of everybody's story."

The program's power to heal is not just anecdotal. Machtinger has preliminary evidence of the Medea Project's life-changing benefits.

Some of the women he studied went through an extraordinary transformation, he says. Many who had barely disclosed their HIV status to anyone when they began, became activists and leaders in their communities — helping to reduce the stigma of HIV, while pursuing personal goals and leading productive lives.

"For them to develop what they described as a "sisterhood" was the most important and most profound type of healing that I ever witnessed," Machtinger says.

He first became interested in the approach, he says, after noticing that "far too many" of his patients who got successful antiretroviral treatment, were still dying early deaths for reasons that had "nothing to do with HIV" — murder, suicide or drug overdose.

"They could have their HIV under control, (but) their lives were not getting better," Machtinger says. "That was because their core issue — a life of trauma and the impacts of depression, isolation and shame — wasn't being effectively addressed. And to us, that's not acceptable."

Machtinger is part of an advisory group helping to develop new guidelines for trauma-informed primary care for the federal Substance Abuse and Mental Health Services Administration, and says the lessons of the theater project are already having an impact nationally.

"The core elements of the Medea Project are really lessons for other interventions to help people overcome trauma and other stigmatizing situations and conditions," he says, noting that childhood and adult trauma have been linked to a variety of illnesses, such as hepatitis C, heart disease and diabetes. The SAMHSA guidelines are likely to be finalized and published later this year, he says.

Trauma at the Root of HIV Diagnosis

Steptoe, who was once addicted to heroin and cocaine, says she became infected with HIV through unprotected sex or sharing needles. She worked as a prostitute in her late teens, 20s and 30s, and was in abusive relationships — once getting beat up so badly, she says, that she spent three months recovering at a hospital.

She now realizes that enduring sexual abuse repeatedly as a child and teen put her on the path that eventually resulted in HIV infection.

"Sexual abuse came from family," she says. "And I guess I was kind of covering all that up by choosing the drugs. It kind of took me out there into the street, looking for love in the wrong places because I didn't have it at home. I started shooting drugs, and that led into prostitution and to prison."

Today Steptoe is busy and full of energy. She takes antiretroviral medication every morning, eats a healthy diet and takes Zumba fitness classes at a local gym. The mother of three and grandmother of nine also has full custody of her 8-year-old granddaughter, who frequently accompanies her to rehearsals.

"She teaches me how to love, and she gives me patience," says Steptoe.

Rhodessa Jones, who mounted the first Medea production more than two decades ago, says Steptoe has flourished since joining the organization, becoming a leader and inspiration to other women.

"She's so powerful, positive and forceful." says Jones. "Theater has really been expressive therapy for her. It gives her a space to speak her truth." 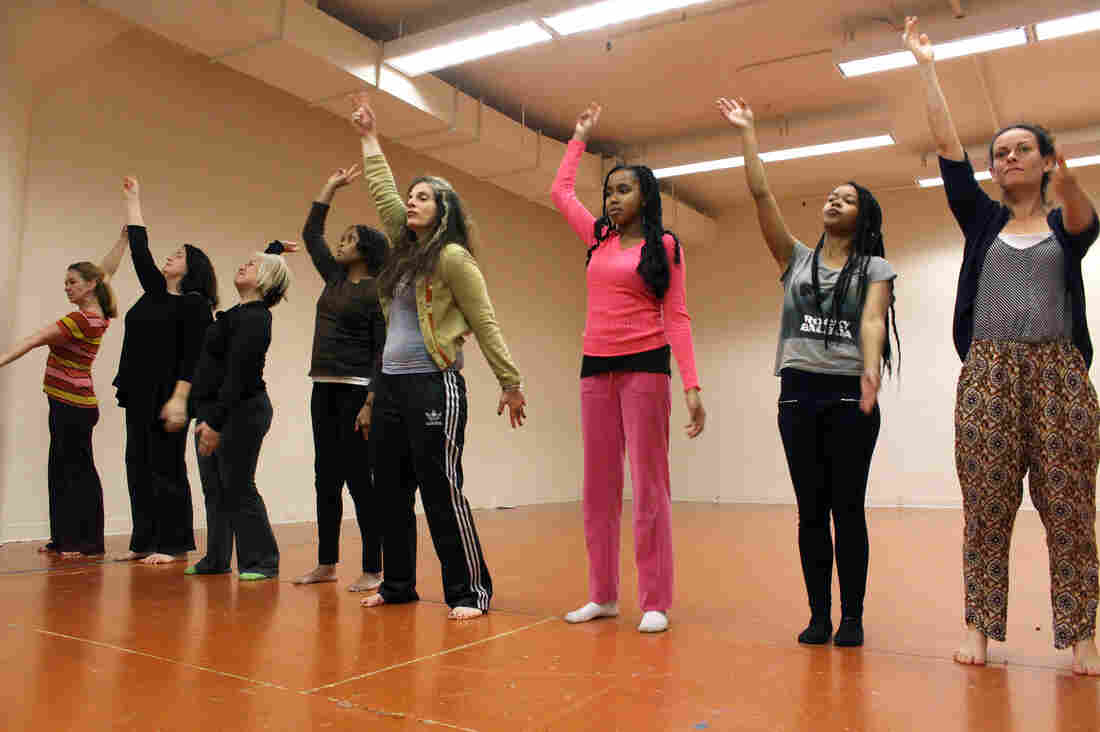 Performers with the theater company rehearse in San Francisco. The Media Project, founded more than two decades ago, melds personal stories with Greek, Roman and African myths to introduce "the universality of all of our stories," says Rhodessa Jones, founder and director. Farida Jhabvala Romero/KQED hide caption

The Medea Project uses Greek, Roman and African mythology to introduce "the universality of all of our stories," says Jones, who asked Steptoe to imagine going back in time to age 14 and write the lessons she would give herself. The result was Steptoe's piece Younger Self.

The piece is about the moment in 1987 when Steptoe first learned she was HIV-positive. It was during a medical check-up, while she was serving time in jail.

"My world crashed," Steptoe says, adding that she had no support at the time, and considered her condition "a death sentence." That night she cried with a pillow over her head so others wouldn't hear.

"I had to relive that again by writing this," she says, "because I needed to heal."

'HIV is a Health Condition, Not a Crime'

Steptoe kept her HIV status a secret for many years. Becoming a part of The Medea Project, she says, was key to finding and using her voice to share what she's gone through. As lead actress, she shares her story with hundreds of audience members in each performance.

"Now I can tell the world that HIV is just a health condition, not a crime," says Steptoe. She's no longer ashamed, and wants to give hope to others — to help them understand they aren't alone.

"I let my grandkids know that even if you go the wrong way," she says, "you can still turn your life around."

The story was produced by KQED's blog State of Health.